Floral spectacles of the world: 9 must-visit destinations for flower lovers

The best times to visit these extraordinary flower-filled getaways around the world, including California's Antelope Valley Poppy Reserve and the lavender fields of Provence...

A trip well-timed around nature's calendar can reap a dazzling reward. Spring blossom and summer blooms can enhance the unlikeliest of destinations, transforming a dusty patchwork of brown to a carnival of colour and fragrance.

Whether or not you're inclined to travel specifically to see the displays, there's no denying a little careful planning can ensure you arrive at your destination dressed in its Sunday Best - a huge bonus.

Here are some of the world's most-loved floral spectacles, and when's best to see them... It's a little-known fact that the jacaranda tree is in fact a Brazilian native, but the purple-flowered tree has so completely settled in South Africa's landscape that often it's our first connection when we delight over the tree's vibrant violet displays.

Jacaranda trees are said to have been introduced to Johannesburg and Pretoria by nurseryman William Nelson in the 1800s. Pretoria in particular boasts the most impressive views, perhaps of anywhere in the world. Tens of thousands of jacarandas line the streets - you'll even hear Pretoria nicknamed 'Jacaranda City'. The trees are rooted in local culture too; public spaces, restaurants, cafes, a shopping mall and even a radio station have chosen their names in its honour.

Among the best jacaranda-lined streets are Bosman Street in Pretoria Central or Celliers Street in Sunnyside. For panoramic views of the purple-tinted city, head to the Union Buildings or to Klapperkop Nature Reserve, just outside of the city centre.

While you're there, visit another of South Africa's famous floral phenomenons, in the Northern Cape. 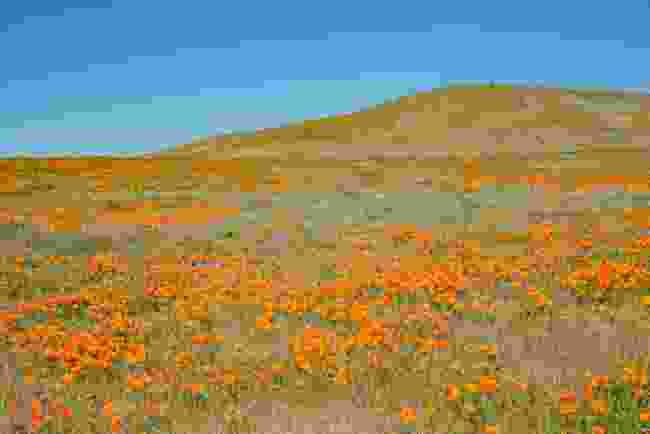 These free-spirited wildflowers form sweeping carpets of sunshine yellow and orange across the seven miles of walking trails in the Antelope Valley California Poppy Reserve, California. The poppy, native to California, is the official state flower, and it's so prolific across the coastal and inland landscape that early Spanish settlers named California 'The Land of Fire'.

You'll often see the flower adorning road signs and shop fronts, and there's an annual California Poppy Day to celebrate its cultural significance on 6 April. The poppy's symbolic meaning was exhibited across the pond in May 2018 at the Royal Wedding of the Duke and Duchess of Sussex - it could be seen embroidered into Meghan's wedding veil in recognition of her Californian heritage.

These sun-sensitive plants can recoil at any hint of inclement weather, so check the forecast for sunny spells ahead of your visit. The vigour of the annual display can also depend upon the amount of rainfall in the region. Luckily, there's a dedicated flower hotline (661-724-1180) that gives up-to-date information. It's no secret that Japan is home to some of the world's most revered wisteria tunnels and canopies, with some specimens over 150 years old. It's through the twisted, gnarled trunks of wisteria trees painstakingly pinned over frames that the slow, meditative and disciplined nature of Japanese culture and artistic practice can truly be appreciated.

Ashikaga Flower Park in Tochigi, around 80 miles north of Tokyo, is home to one of Japan's most breathtaking wisteria canopies, pictured above. The 150-year-old tree, with an extraordinary spread of 80 metres, is one of 350 wisterias in the park. The wisteria tunnel at Kawachi Fuji-en Gardens in the Kyushu region is another famous spot - home to 150 wisteria trees and a spectacular 100-metre tunnel.

Peak bloom sweeps through Japan from south to north. The milder the climate, the earlier the bloom, so it'd be wise to check ahead of your visit. For wisteria, mid-April to early-May is typically the best time to enjoy the view.

Best time to go: April to May The fizzing pink foothills of the Anti Atlas mountains announce the arrival of spring in Morocco, transforming the undulating lunar landscape of the range and its surrounding Berber villages. Seemingly endless groves of almond trees blush the hills and valleys, lighting the way to Tafraout; a quiet Berber village in the Ameln Valley, and Morocco's almond-producing heartland.

Almonds are important to Morocco's culture and economy - as they're an important ingredient in tagines, pastries and desserts. In fact, the North African country is one of the world's biggest producers. Almonds are so significant to Tafraout that each year, an almond blossom festival takes place, where Berber music, dance and theatre is showcased, and where merchants meet to exchange almond products. The elusive festival has no particular date; the local farmers decide upon the date according to when the almond trees bloom.

5. Hydrangeas in the Azores, Portugal 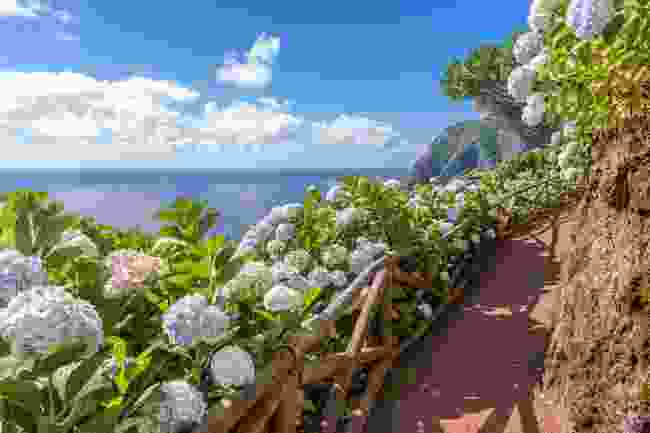 Hydrangeas along a coastal path in Portugal (Dreamstime)

The Azores archipelago is loved the world over for its abundance of hydrangeas: big, bold pom-poms of blue, pink and white cheering the summer months across the coastal landscape. The volcanic islands' unique ecology supports the plants' requirements - not in fact native to the island but introduced from America or Asia some 300 years ago.

Hydrangeas have become a symbol of the Azores over the years, and as such you'll see them fringing roads and paths on all nine of the major islands. For sheer spectacle, head to the island Faial, locally known as 'the blue island' on account of its endless hedges of blue hydrangeas on coastal paths. Or, head to Pico, one of two UNESCO World Heritage-listed islands in the Azores, where the dramatic black volcanic landscape is bejewelled with blue in the summer.

Read our practical guide to the Azores The image of the rustic Sénanque Abbey in Gordes, Provence, resplendent amongst fields of purple is world-famous - an icon of the French countryside. The abbey itself dates from the early 1100s, when it was a home to Cistercian monks, and remains their home to this day - an outstanding example of the survival of an ancient way of life.

It's the monks who began to grow and harvest lavender to earn an income in the abbey's surrounding fields, and their business acumen has since been adopted by farmers around the region. Follow Provence's lavender trail around the regions of Luberon, Mont-Ventoux, Sault and Valréas, and learn more about the monks' lavender legacy at Musée de la Lavande. 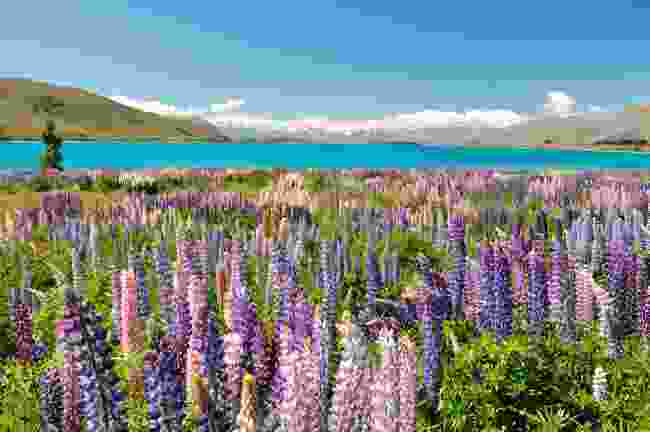 Sky-high spires of lupins fringe the turquoise lakes and river banks of the Mackenzie region of New Zealand's South Island each summer. Interestingly, they're actually an environmental pest - they were introduced to the region just under 100 years ago, and they've since naturalised to the extent of becoming a threat to the ecology of the region.

It's possible that the lupins could be eradicated from the New Zealand countryside for the greater good, so enjoy them while you can! Some of the best places to admire them include Lake Tekapo (pictured), Wanaka, Twizel and Lake Taupo. Thanks to the long spring season and cool nights of the Netherlands, the 'world's flower shop' is a global leader in the farming of tulips for commercial sale, offering tulip-lovers the opportunity to revel in rainbow-striped fields ahead of the mass harvest of some 1.7 billion tulips before they're whisked away to decorate our interiors.

The central and north-west areas of the Netherlands offer the best spots to admire fields of tulips - Noordoostpolder in the Flevoland region has perhaps the most numerous, and you can follow the coast from Leiden to Alkmaar to explore further.

The lurid region of Lisse hosts the world's most famous tulip sensation; the 32-hectare site of Keukenhof Gardens, which celebrates spring every year with a collection of seven-million multicoloured tulips.

Best time to go: April to May Washington DC's Tidal Basin is awash with pink every spring, home to over 3,000 flowering cherry trees introduced from Japan in the early 1900s. Today, an annual National Cherry Blossom Festival marks the occasion; kicking off this year from 20 March to 13 April. The cherry blossom lasts on average around a week, so you'll have to keep an eye on the city's cherry blossom forecast to make sure you hit peak-bloom, when 70% of the trees flower in synchronicity.

The festival draws millions of visitors every year. So, to beat the crowds, head to the Tidal Basin as early as you can possibly manage - the display isn't affected by adverse weather or light conditions, so it'll be equally pretty at any time of day. If you're really averse to crowds, you could opt to take a kayak or pedalo across the basin instead.

Top tip: for twilit panoramic views and ideal photography conditions see the trees at 'golden hour' - as the sun rises at about 6:30am, or as it sets at about 19:30pm.