Sulawesi is fascinating for anyone interested in discovering local cultures. Mark Eveleigh visits the island’s far north to find the traditional homelands of the Minahasa people...

Out of the entire Malay Archipelago, Sulawesi (then known as Celebes) was described as “the most remarkable and interesting [island] in the whole region, or perhaps on the globe.” Alfred Russel Wallace’s words were written over 150 years ago, but still ring true. Indonesia’s fourth biggest island – twice the size of Portugal – boasts unique wildlife (many species first described by the tireless Welsh naturalist) along with its fascinating indigenous cultures. On Sulawesi’s far northern tip you find the volcanic homelands of the Minahasa people, heirs to a wealth of fiery legends and vibrant traditions.

“The name ‘Minahasa’ comes from a local phrase meaning unification, or ‘coming together’,” Elvis Pangemanan, head of the Minahasa Tour Guide Association, tells me. “Once our ancestors were divided into nine feuding clans. Perhaps it is this combination that gives us such a uniquely rich culture.”

You have to assume that the dramatic landscapes that the Minahasan forefathers settled in must have played a part too. The perpetually rumbling volcanic peaks of Lokon and Mahawu make for dramatic backdrops to any trek while Lake Tondano is the most famous beauty-spot in the region.

“Two Minahasan lovers from neighbouring clans ignored the prohibition from their leaders to marry,” Elvis explained. “Apparently, they angered the gods of the volcanoes to such an extent that they exploded, creating this lake.” 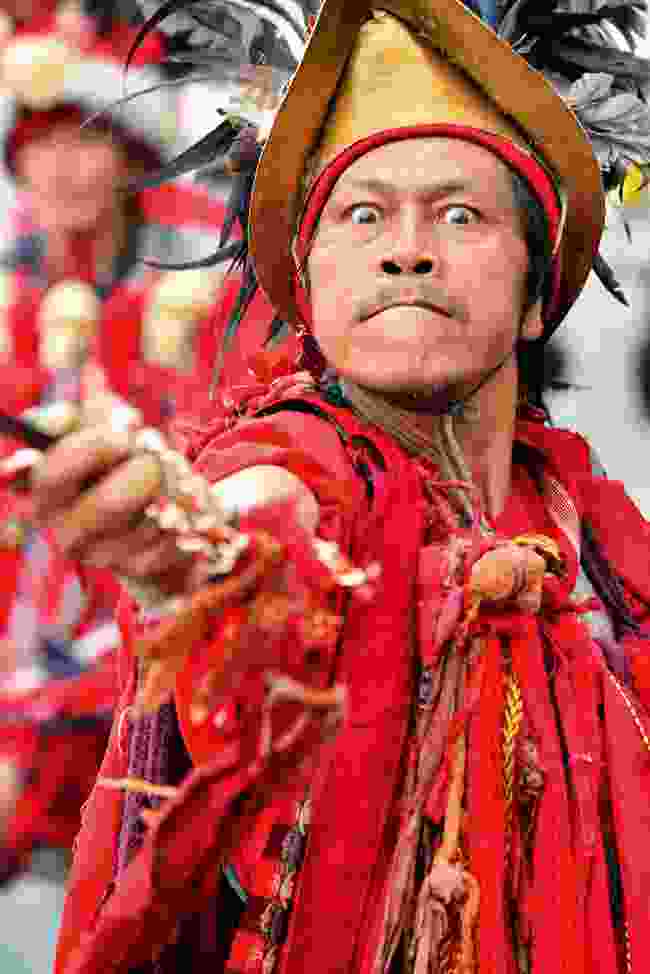 We were tucking into grilled tilapia fish and curried snails on the timber veranda of a warung (restaurant) overlooking the lake while my guide outlined the plot to a Minahasan version of Romeo and Juliet. While Indonesia is famous as the world’s biggest Muslim country, most Minahasans are Christian. Yet traditional beliefs and animist worship remain strong in a tight-knit population that prides itself on celebrating its shared roots. As with so many places in Indonesia, the real lodestone of cultural riches are often hidden below the surface and a knowledgeable and enthusiastic guide might be the only shortcut to understanding local culture.

Adventurous cuisine seems to go hand-in-hand with spectacular volcanic landscapes and enchanting traditions on any journey through this region: ‘We take it as a point of honour,’ Minahasan hosts will often tell you, ‘that anyone who comes to visit us must leave fatter than they arrived!’

A word of warning though, if you’re squeamish about dining: it would be recommended to enquire carefully before you stab a random finger onto a Minahasan menu. Any trip through this region can quickly turn into one of the world’s more challenging gastronomic adventures.

“We eat everything with four legs except the table,” Elvis joked with barely disguised pride. In fact, they also eat many things with six legs, most things with two legs and almost anything with no legs at all too. 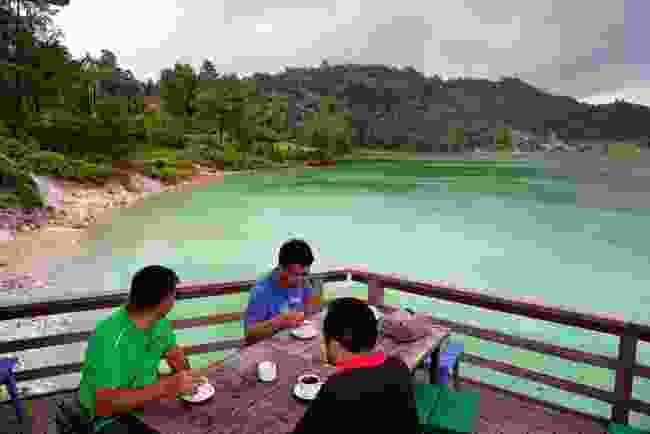 Sometime around 1.5 million years ago, the Tondano super-volcano blasted itself into oblivion, creating the beautiful 11-kilometre-long Lake Tondano – spiritual heartland to the Minahasa people. The lake provides sustenance for countless Minahasan communities that live from rice-planting, fish-farming and duck-ranching (and even from diving for eels).
What the sulphurous waters of Lake Linow lack in sustenance they make up for in spiritual nourishment: this little crater lake was icy blue at the time of writing but is apparently perpetually changing. A spiritual kaleidoscope, locals say, that provides an insight into the future.

In the centre of the Minahasa region, Tomohon Market is an eye-opener even for experienced Asian island-hoppers. The rich, volcanic soil provides almost comical abundance; you’ll see giant papayas that tip the scales at 13kg and table-flattening 40kg jackfruit. Every two years (in August) Tomohon – the City of Flowers – hosts a Flower Festival, which features a parade of 80-or-so decorated floats from as far afield as North Korea, Vietnam and Russia. Beware: you might want to skip the meat and livestock section of the market. It shocks many visitors to see merchandise that would usually be considered ‘endangered species’ or ‘pets’ rather than ‘food’. 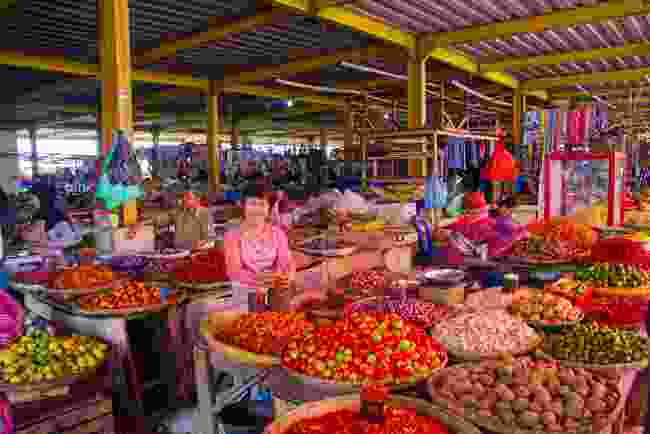 Below the rumbling foothills of Soputan Volcano, you find Watu Pinawetengan, the sacred sacrificial stone of the Minahasa. This boulder was said to have been the original spot for the meeting that united the nine Minahasa clans and it has been a place of worship ever since. Many Minahasan men can be identified by signet rings set with colourful stones; these are believed to bestow powers that emanate directly from ancient spirits within the boulder.

The Minahasa gods were so benevolent that they even took the trouble to cook the food for their worshippers: at the weekend crowds of local people come to the thermal springs at Bukit Kasih Kanonang to cook corn and boil eggs in the vents from which super-heated steam gushes. The great sulphur-tinged escarpment has become a national monument to peaceful interactions between the religions and you can hike up the smouldering escarpment to various places of worship dedicated to Muslims, Christians, Hindus and Buddhists. 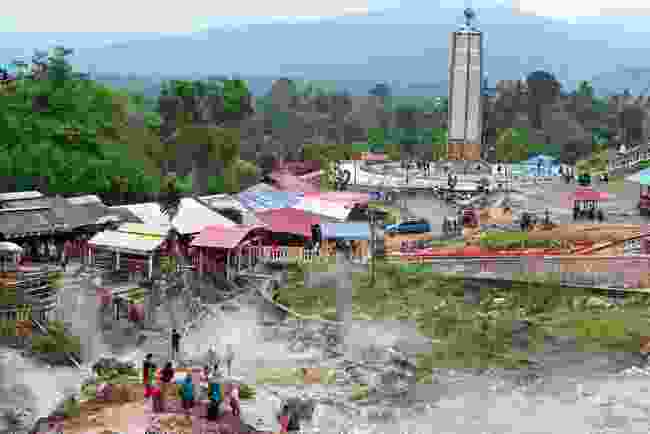 At the hot springs surrounding Toraget village, locals also boil snails and cassava in the steaming vents. They use the boiling water of the hottest pool to singe the feathers from chickens before gathering with their friends to soak luxuriously in other (cooler) natural hot tubs. Steam rises among the trees to drift across paddies that are pitted here and there with potholes in which boiling clay bubbles and splutters. There are few places where you get such a dramatic sense of the flimsy crust that covers our smouldering planet.

Most Minahasans are nominally Christian but the region still boasts a large Buddhist community and the manicured gardens and ornate dragon-topped shrines of Vihara Buddhayana Temple is a tranquil place to experience this important aspect of the local culture. In the shade of a nine-storey pagoda you’ll find a whole series of over-sized gilded statues of chubby and very jolly Buddhas: a jolly Buddha baring his ample breasts; a jolly Buddha shouting heavenward; and a jolly Buddha crumpling his face in concentration as he cleans his ear with what seems to be a chopstick…

7 things you must do in Indonesia