Want a wildlife interaction with a difference? We take a deep breath and reveal the best underwater animal encounters...

If 70% of our planet is covered in water, surely it’s time we stepped off land and started exploring its hidden depths? From giants of the deep to playful characters and mesmerising wonders, we’ve taken a look at the subterranean wildlife displays you won't want to miss... 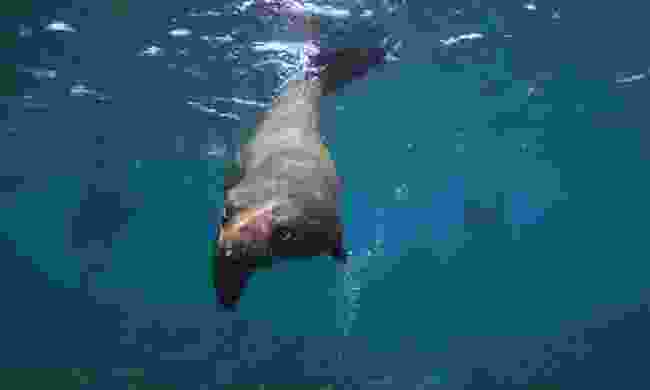 Windmill Beach in Simonstown, South Africa, is the location for an amazing, alternative dive. Forget coral reefs and imagine a flooded kelp forest. Shore dive into towering plants and swim with excitable cape fur seals. The stars of the show come out to play, twirl in and out of the kelp and vie for your attention. Their inquisitive behaviour makes this dive particularly special. They aren’t shy of human visitors and will happily swim parallel to your dive course as you make your way around the rocky point. The mischievous mammals only fear one ocean inhabitant, their main predator ­– the great white shark.

Cape fur seals can dive to depths of 204m for as long as 7.5 minutes and feed on a diet of fish, squid and crab. It has a broad head with a pointed snout and adult males have a dark mane in contrast to the female.

Windmill beach is situated right around the corner from the popular African penguin colony at Boulders Beach. It is a sheltered, gently sloping beach that leads to flat, shallow waters. The site makes a great dive for a beginner as it has an average depth of 8m. Diving at Windmill you will also see nudibranches, sea urchins, sea cucumbers and plenty of critters to discover inside cracks and hidden under rocks.

Did you know? The brown seal has two subspecies, the cape fur seal and the Australian fur seal, which generally feeds at lower depths than its cape counterpart and tends to be smaller in size. 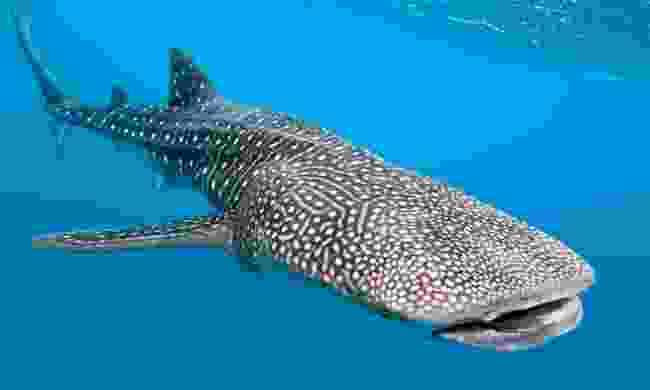 The Ningaloo Reef is home to a myriad of marine life. Every spring one of the rarest and largest fish in the world migrates here ­– the whale shark. These sea Goliaths, of up to 12m in length, are regular visitors to the reef from March to June.

The coral spawning at this time of year create plankton-rich waters to draw the whale sharks close to the reef in search of food. The 18-tonne giants swim along with their colossal mouths open wide, near to the surface to scoop the tiny plants and animals up.

Each whale shark has a unique, distinctive pattern of light, pigmented spots along their forward flanks. These markings have proved to be effective in differentiating individual sharks. The fascinating creatures can dive to depths over 1,000m in search of food and will soon make their escape to the deep if disturbed.

Water at that depth is only a few degrees above freezing and therefore helps explain why these tropical fish have an insulating fat layer just below their skin.

The intricate reef system of Ningaloo stretches over 260km. Coral Bay and Exmouth make great bases to witness this Red-Listed species in all its glory.

Did you know? Humpback whales can also be found on Ningaloo Reef (Jun – Nov) as well as manta rays (May – November). 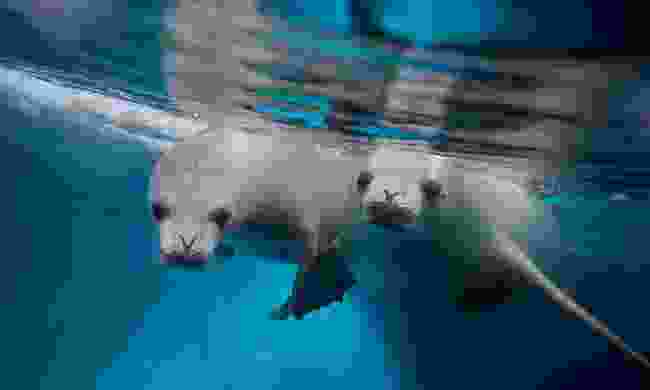 Diving in Antarctica is certainly not for the faint-hearted but if you want to dive in a unique location that has been explored by a brave few then this might just be the experience you’ve been looking for! However, there is a catch, due the extreme diving conditions you must be an experienced diver that has at least a recommended 20 dry suit dives under your belt. You must also have experience of cold water diving – this will allow you to dive off the edges of ice floes and around monumental icebergs.

This remote destination is home to macro marine life you are unlikely to see anywhere else in the world. Diving is normally done on the East Antarctic Peninsula. Giant isopods, 10cm in length, crawl along the seabed like enormous woodlice and can be seen at the Goudlier dive site.

Spot 34-armed starfish in stunning colours hiding among kelp walls and shy Antarctic bloodless fish, filled with their own special anti-freeze surviving in these hostile waters.

This is an alien underworld experience that has had little documentation in the past – perhaps you’ll discover a new species of your own! Watch charismatic penguins dive en masse into the oceans from a fresh perspective. Palmer station is a great dive site to see royal penguins, king penguins, gentoo penguins and rockhopper penguins.

November to March is the best time to dive here (Antarctic summertime). You can depart by boat from Chile, New Zealand or Argentina with journeys taking around two days before you will embrace an encounter with wildlife certainly beyond the ordinary.

Did you know? The East Antarctic Peninsual is also home to four seal species that you are likely to see – crabeater, fur, weddell and the top predator – leopard. 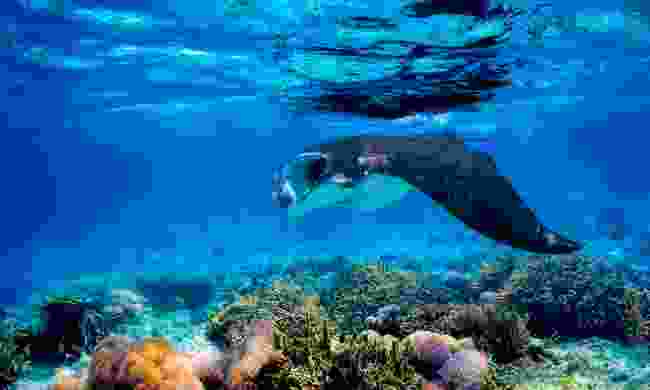 Manta rays are mysterious gentle giants with bodies spanning up to 8m in length. In the Maldives you can dive and even snorkel with these graceful creatures of the deep. At particular times of the year they come into shallower lagoons in high tide to feed on nutritious plankton and visit cleaning stations.

From only a few metres below the ocean’s surface you can watch them swooping and spiraling, performing loop-the-loops in the bubbles emanating from people’s scuba gear. Moving in formation, schools of black silhouettes dance above you.

Each manta has unique markings on its underside, allowing researchers to identify individuals and help monitor their progress. They are a species hunted illegally for their gills.

Hanifaru, a 40-minute boat ride from Baa Atoll is a small lagoon and a hotspot for these elegant fish during the south-west monsoon. The best time of year to experience these magnificent creatures is between May and November. As it gets closer to the full moon the bay can attract more than 100 mantas.

Local fisherman call the species “devil-fish” because of the horn-like fins hanging down near their mouths. These are actually two cephalic lobes. Ironically, in character this pure and placid marine species resembles an angel of the ocean rather than a devil.

Did you know? Manta-rays have the largest brain compared to any other fish of their size and can dive to depths of up to 120m. 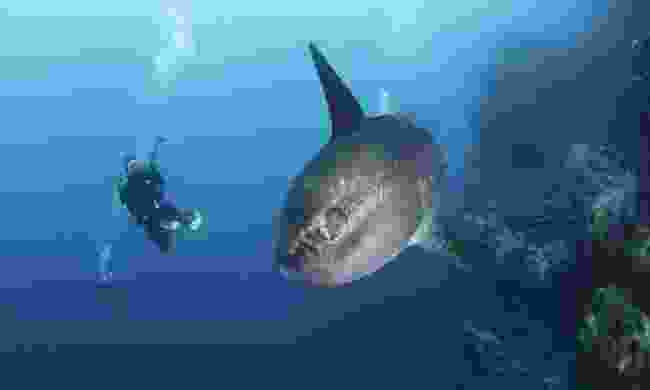 The ocean sunfish or more commonly referred to as mola mola, or sunfish, spends the majority of its watery life residing at depths greater than 200m. Although its name is derived from its habit of sunbathing at the surface of the water.

This curious species gracefully rises to the surface and creates a captivating spectacle if you are fortunate enough to encounter it.

Mola is the Latin for 'millstone', which the grey-coloured, rough-textured and round fish resembles. The species can grow up to 3m and weigh a gigantic 1,000kg. Evidence has shown that sunfish feed at many levels of the ocean’s depths, although its diet primarily consisting of jellyfish.

Native to temperate and tropical waters, the sunfish can be spotted in the Galápagos Islands at Gordon Rocks. This famous, central island dive site is located approximately one hour’s boat ride from Puerto Ayora. A dive location recommended for intermediate to advanced divers, it has strong currents and surges.

December to April is the best time of year to jump in the water here. Sightings of this unusual creature are rare but are made all the more exciting should it occur. This dive site is still well worth a visit to seek out hammerhead sharks, tropical fish, manta rays, marine tortoises, octopus and moray eel.

Did you know? Mola mola exhibits the ability to vary its skin colouration from light to dark, especially when under attack.