No matter what your cycling ability, the Peak District is a superb spot to explore on two wheels. These routes showcase the district's abundant wildlife, stunning scenery and rich heritage...

The Peak District offers superb cycling. There are plenty of quiet backroads and challenging gradients for the athletic road cyclist, but there are also a handful of flattish dismantled railway trails that weave alongside burbling brooks flanked by cliffs and steep-sided hillsides – or slice through rolling uplands.

A grand cavern, picture-perfect estate village, imposing mills and impressive Victorian viaducts and bridges are all to be found along the way. The wildlife is impressive too: verges of wildflowers and herbs in the dales; birds of prey on the moorlands and waders on the reservoirs.

Here are 8 of the best off-road cycles in the Peak District... 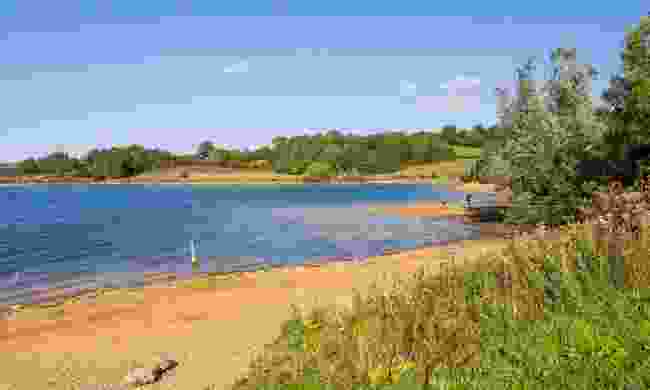 This is a fine eight-mile cycle circling the reservoir that lies between Ashbourne and Cromford. You can hire bikes from the water-sports centre before heading towards the dam head with its wide open views over the expanse of water. From here the path climbs through meadow and woodland with some short sharp ascents and descents to test your mettle (there’s always the option of getting off the bike and walking).

The track flattens out at its northern end and it’s an easy ride back to the Visitor Centre on the west side. Stop off at one of the bird hides, where you can spot some of the 200 species of home and migrating birds that inhabit the reed beds and islands, including lapwing, the elegant little egret and the gangly cormorant. This wonderful 15-mile cycle hugs the sides of three reservoirs in the Upper Derwent Valley: Ladybower, Derwent and Howden. On a warm, sunny day, the intense blues and greens of water and pine are more reminiscent of the Mediterranean than the north of England.

The route takes in a mix of road and track – with a few steeper ascents on the eastern side and northern end, where the track traverses the edge of the moorland. Look out for buzzards, merlins, peregrine falcons, goshawks and sparrowhawks on the upper reaches – or the more common red grouse. If it’s a hot day, you can always stop off at Slippery Stones for a spot of wild swimming.

Derwent Reservoir is best known for its association with the Dambusters, who practised their manoeuvres here before going on to breach dams in the Ruhr Valley of Germany during World War Two. There’s a little museum at Ladybower with an interesting collection of memorabilia and photographs (not always open so check for opening times). Bikes can be hired from Fairholmes Visitor Centre. 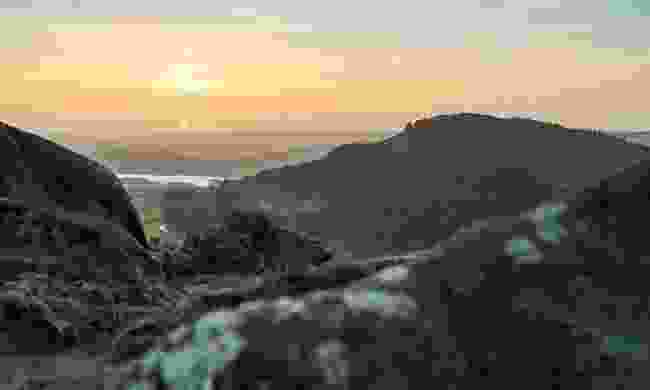 The view over the Black Rocks at sunset, Cromford (Shutterstock)

The High Peak Trail certainly lives up to its name. The dismantled railway cuts across the crest of the limestone uplands with wide-open vistas and big skies and on through countryside rich in industrial history (well-documented along the way). At 18 miles one way, you’ll need most of a day to ride it in both directions.

Most people start from Parsley Hay (just off the A515 a few miles south of Buxton), where you can hire a bike and tank up on hot and cold drinks and snacks before pushing down on the pedals.

From Middleton Top, the trail drops steeply down to High Peak Junction with breath-taking views above Cromford to the village and the Matlocks beyond with their rocky tors. From High Peak Junction you can cycle along the canal to Cromford (with railway station). For those who are cycling one way from Parsley Hay, you’re on a roll, literally – it’s downhill all the way. 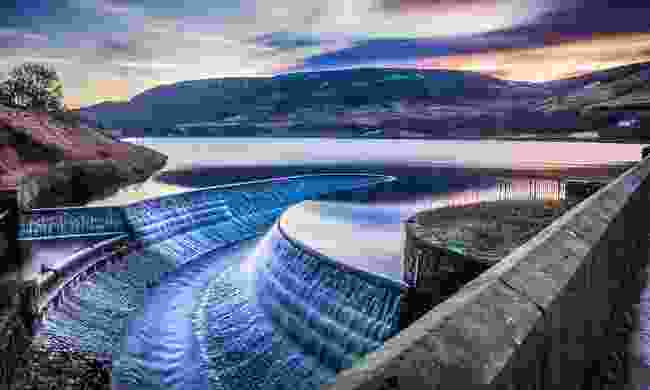 The 12 mile there-and-back cycle begins at Hadfield, better known as Royston Vasey in The League of Gentleman with its ominous road sign, ‘You’ll never leave’. There’s nowhere to hire a bike in town, but with the railway station very close by, you can easily transport your own.

From Platt Street, the trail follows the path of the dismantled railway, gently rising up through the valley flanked by moorland and on past a series of five reservoirs. Take a picnic, settle down on one of the trail’s benches and enjoy the vista of moorland and water. The trail ends at Woodhead Tunnel.

Turn the bike and let the wheels drop you gently down to Hadfield again. It’s a glorious cycle in fine surroundings. Choose a sunny day, if you can, when the water sparkles blue and the moorland is a bright wash of greens, yellows and beiges. 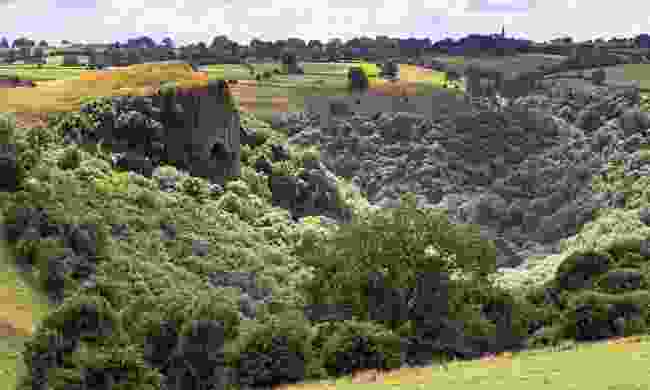 Another dismantled railway track, the Manifold Track climbs gently through nine spectacular miles of scenery from Waterhouses to Hulme End, the valley touted as the ‘Little Switzerland of Staffordshire’. It’s hardly alpine, but the columns of rocks that rise out of the steep-sided hills makes it a dramatic location.

Take time to chain your bike up at the bottom of the path that leads up to the great mouth of Thor’s Cave – once home to giant deer, bear and mammoth, and explore this cavernous space. Back on the bike, head through the long, narrow and dimly lit Swainsley Tunnel and on to Hulme End with its charming engine-shed Tea Junction café – or drop into the Manifold Inn for a well-earned pint. 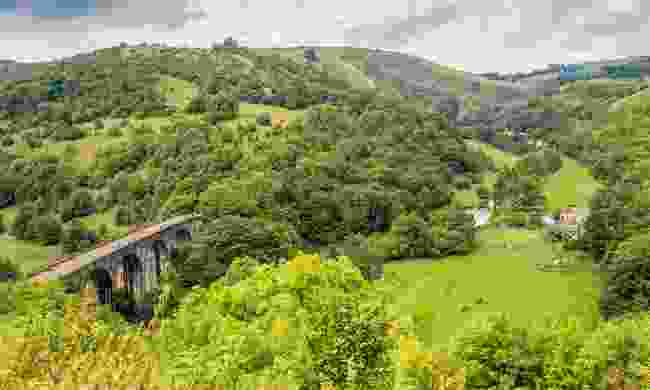 Perhaps the king or queen of all the dismantled railway tracks in the Peak District (although it has plenty of competition), the 16 mile (there and back) trail is a joy to ride, from the jaw-dropping views on the viaduct overlooking the Wye Valley as it sweeps a horseshoe curve, to the wild and narrow cliff-lined Chee Dale at the northwest end.

It’s great fun to negotiate your way through the six dimly-lit tunnels on route, avoiding walkers and drips of water. You can start from Bakewell (or hire bikes at Hassop Station a couple of miles outside the town) – or begin from Blackwell Mill at the other end (also with bike hire).

Hassop Station Café is a great spot for lunch with its long terrace overlooking the trail. Likewise, Blackwell Mill with its Hardy-esque hamlet of riverside cottages and humped bridge, is a choice location for a ‘view with a chew’ (there’s also a snack bar with outside seating at Blackwell Cycle Hire). 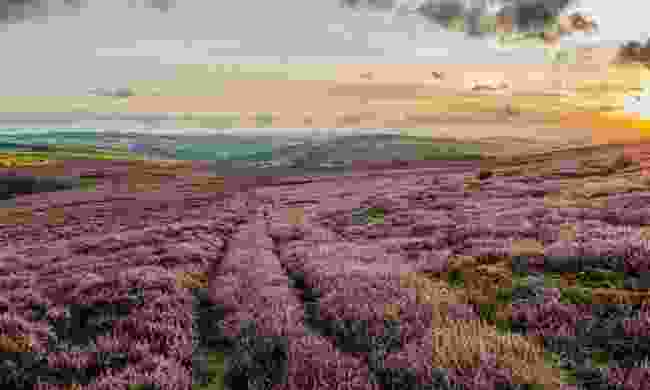 A heather field nearby Hayfield (Shutterstock)

Short and sweet at five miles there and back, the Sett Valley Trail begins at Hayfield, with its iconic kinder Massif backdrop. The dismantled railway trail slopes down to New Mills, past woodland, pasture and hill, including the wonderful Lantern Pike – looking like a misshapen conical hat. Stop by the audio post to learn about the history of the area, accompanied by singing school children and the words of a local poet.

The end point is the gritty town of New Mills with its impressive Victorian engineering: soaring chimney stacks and crumbling mills; great viaducts and bridges that simply arch the deep incision of the Goyt Valley that slices through the town. Chain up the bike and walk down to the valley floor and the Millennium Walkway, an impressive metal structure that follows the gorge just above the river, bolted to the retaining wall and supported by pillars on the riverbed. 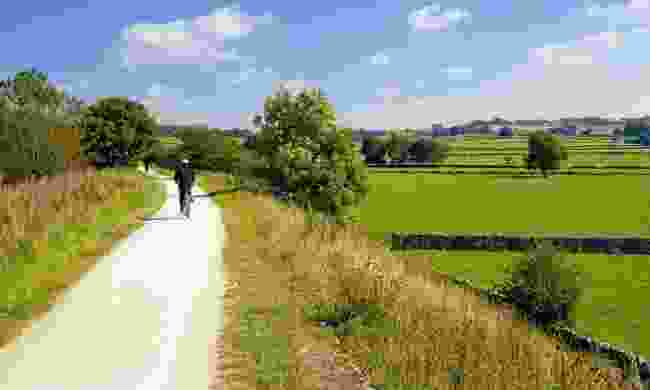 You can start your ride from Parsley Hay or Ashbourne (bikes can be hired from either end). Another stunning ride (13 miles one way) taking in upland, pasture and woodland. Make sure you stop off at the quintessential estate village of Tissington with its fine Jacobean hall, honey-coloured cottages, wide grassy verges, duck pond and hillside Norman church.

It’s a good spot for a cream tea too, either at Bassettwood Farm just outside the village (with its menagerie of animals, shepherd’s hut and retro American air-stream caravan) or at Herbert’s Fine English Tearoom, all crystal chandeliers and fine-bone china.

You can cross over from the Tissington Trail to the High Peak Trail using back roads to make the route circular. Bear in mind, off the dismantled railways there will be more gradients.

Peak District vs. Lake District: Which should you visit?