13 of the best e-biking tours across the globe

Take a load off your thighs, as we pick the European, Asian and African rides that'll put the electricity back into your next cycling escape, in every sense... Live out your yellow jersey fantasies on the Tourmalet and the Cols of the Tour de France trip with Purely Pyrenees.

Although this self-guided tour follows the official route, you can enjoy letting your e-bike take the strain while going at your own pace.

Breeze past iconic mountain scenery and lush valleys while pedalling across famous Pyrenean mountain passes and the cols of Tourmalet and Aubisque. See a different side to Croatia on Headwater’s self-guided Coastal Croatia – Pula to Porec Cycling tour. Take on the coastal bike trails around the Istrian Peninsula, riding through oak forests and underneath umbrella pines.

Then, explore Pula’s Roman amphitheatre and admire the intricate frescoes inside the baroque and Byzantine basilicas of Rovinj. Cool off­ afterwards with a soothing sunset dip in the glittering Adriatic or an evening walk across Fazana’s star-lit harbour. Cycle across an archipelago in Finland (Magnetic North Travel)

Steady your legs and live life in the slow lane on the self-guided Archipelago Trail of Finland with Magnetic North Travel.

Explore the islands on­ the south-western coast by cycling from Nantaali and hopping by ferry at your own pace across Vaihela, Kustavi, Houtksari and others.

Pedal serene fishing villages, medieval castles and old wooden churches before looping back to finish on the mainland.

When: June to August Starting in Paro, pedal through centuries of Bhutanese history with tours of medieval fortresses and ancient monasteries where you have the chance to discover Buddhist traditions, before pedalling past wild Himalayan countryside, bamboo forests and remote villages.

And with all those uphill climbs in your way, you’ll never be more glad to be on an e-bike. Unless you have the thighs of a god, of course. Blaze a trail across the steep vine-covered hills of northern Portugal on the self-guided Douro Valley by E-bike trip from Bspoke Tours.

Spend time in the laid-back city of Porto, admiring the Baroque civil architecture of the 18th century Casa de Mateus palace, before riding deep into the Douro Valley’s network of vineyards to taste the local port wines in Quinta and Pinhão.

As an added bonus, you can even hop on a boat and take in the picture-perfect view from the Douro River. Pedal your way across three countries, Austria, Switzerland and Germany

Get in gear with Saddle Skedaddle’s self-guided tour of Lake Constance and cycle Austria, Switzerland and Germany in just eight days. It’s not a mad dash, though.

Simply follow the lake’s sandy shores at your own pace, passing bucolic vineyards and quaint Swiss fishing villages en route to the historic German towns of Constance and Friedrichshafen, and on to Austria’s Bregenz, famed for its floating music stage. A worthy trio! Cycle the lakes and volcanoes of the Azores (Sunvil)

Cycle your way around the lakes and volcanoes of the Azores, Portugal

Get in the saddle for Sunvil’s self-guided Cycling Holiday of São Miguel, pedalling easy coastal roads and rolling through lush volcanic scenery on the largest island in the Azores.

Soak weary thighs in hot springs en route and dip your toes in the Sete Cidades lakes, where you can take a moment to enjoy the view of these deeply blue twin lakes, before heading to the Botanical Gardens for a stroll around its floral wonders.

When: regular departures throughout the year (late May to early October for direct flights) Uncover the Secrets of Hokkaido on this group cycling tour of Japan’s remote far north with World Expeditions.

Absorb traditional Japanese culture with stays at ryokan inns and long soaks in hot springs after the day’s ride. Soak up Italy’s rural and cultural charms on this leisurely guided ride through the region’s backroads, packed with olive groves and cypress trees.

Stop off to sample the finest Chianti wine at remote vineyards and uncover medieval hilltop villages on your journey, before stopping to spy Renaissance artworks and architecture in the culture hot spots of Florence and Siena. 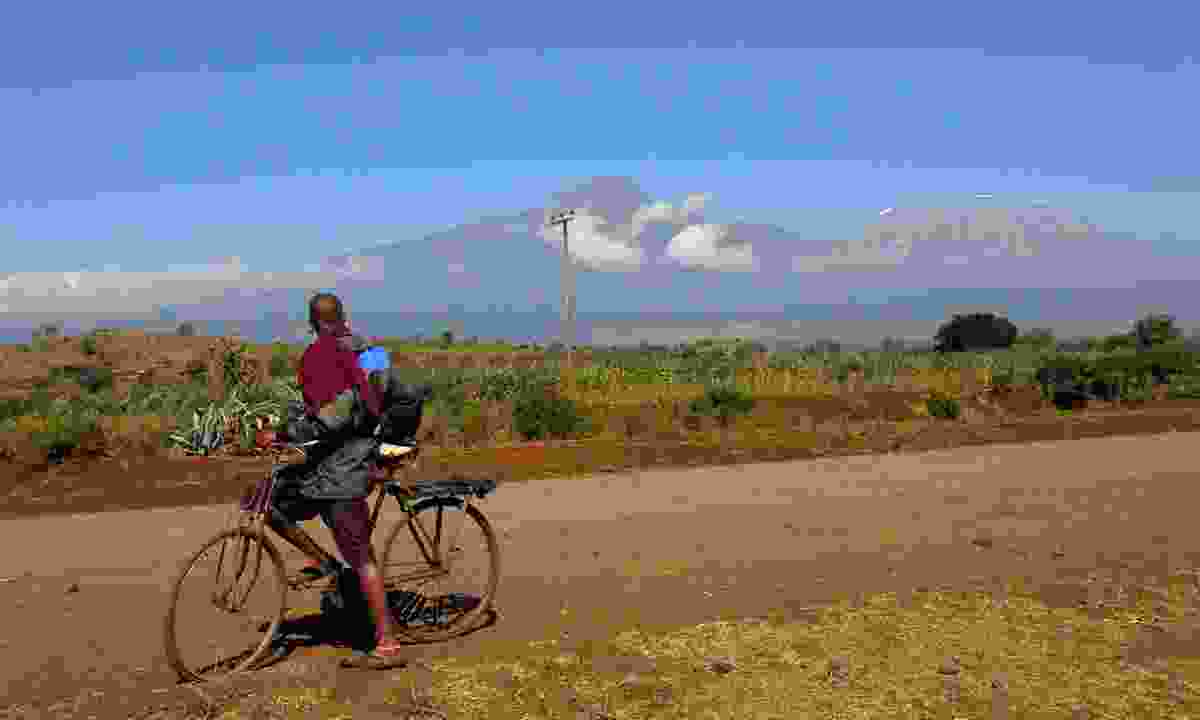 Whizz up a mountain and watch wonderful wildlife

Push your endurance to the limit on SpiceRoads Cycle Kilimanjaro to the Indian Ocean trip. The mighty Mount Kilimanjaro may be the giant in your midst, but the endless plains of the Tanzanian savannah also await you on your trip.

Watch Maasai dance performances and go on game drives before whizzing through the wilds – it’s sure to be an extraordinary trip. 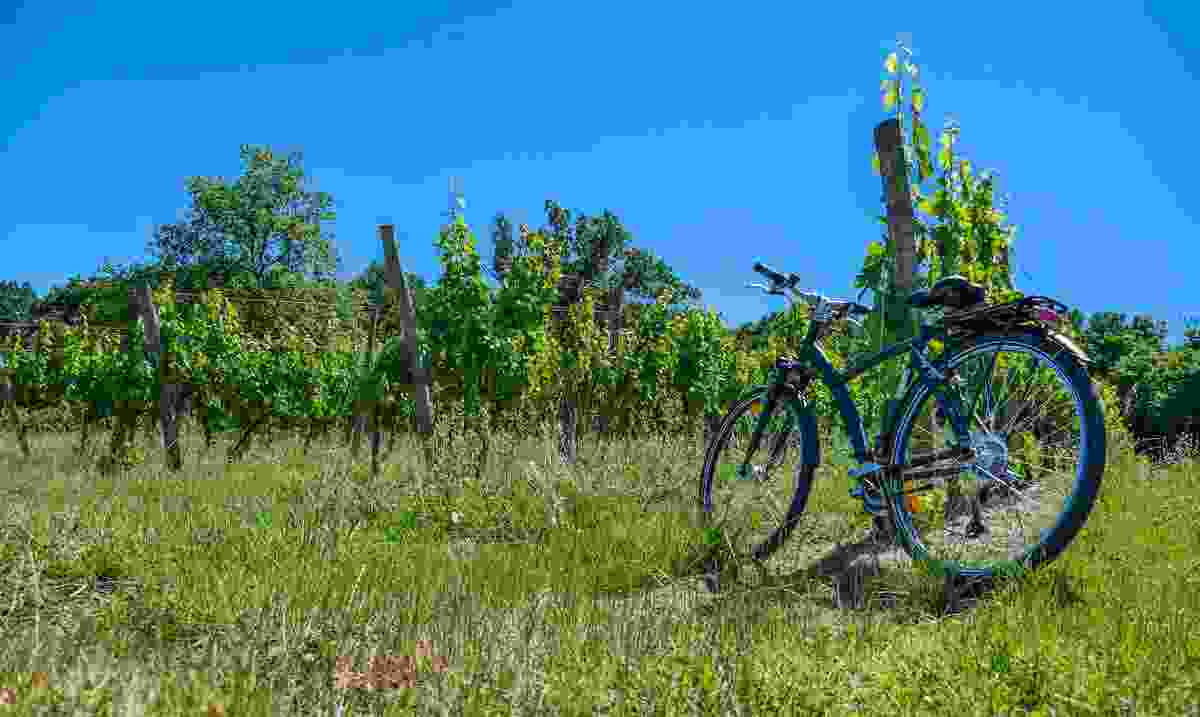 A bike in a vineyard in Saint-Émilion (Shutterstock)

Set a new cycling challenge for yourself and educate yourself on the history of wine on the self-guided Bordeaux City and Vineyards tour from Cycling for Softies.

Admire the rich history and impressive architecture of Bordeaux before cycling eastwards to visit to the towns of Saint-Émilion, Sauternes and Cadillac.

Revered across the world, these towns are home to some of the world’s finest wine, which you can sample alongside the local cuisine. And you can take a bottle on your bike ride – perfect for an impromptu picnic. 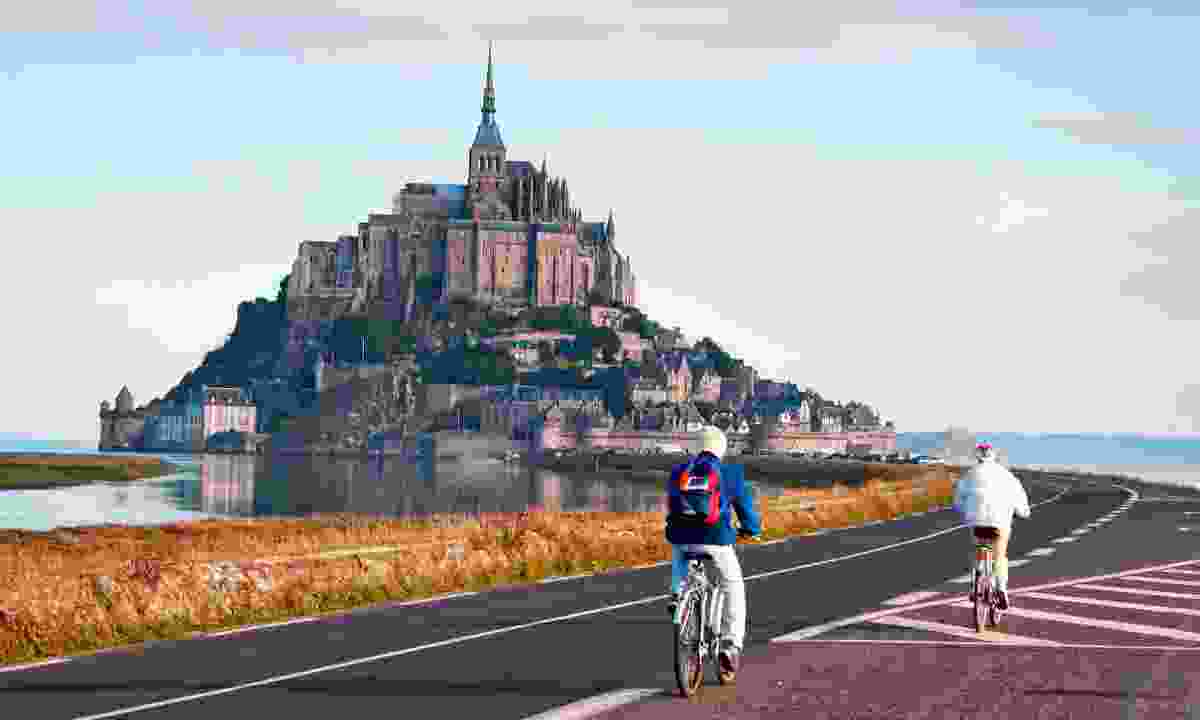 Bike through Normandy during the anniversary of D-Day (Shutterstock)

Celebrate the anniversary of D-Day on a cycle in Normandy, France

Learn more about WWII on Inntravel’s self-guided Bayeux and Beaches of Normandy trip this summer.

With the 75th anniversary of the D-Day Landings approaching, cyclists and history buffs will delight in pedalling along Normandy’s charming coastline, which will be coming to life with military parades and firework displays in celebration of peace.

Pass through Arromanches and the famous landing beaches, before heading to Bayeux, where you can spy the iconic tapestry and pay your respects at the largest British Military Cemetery in France. It’s an evocative time for Normandy. 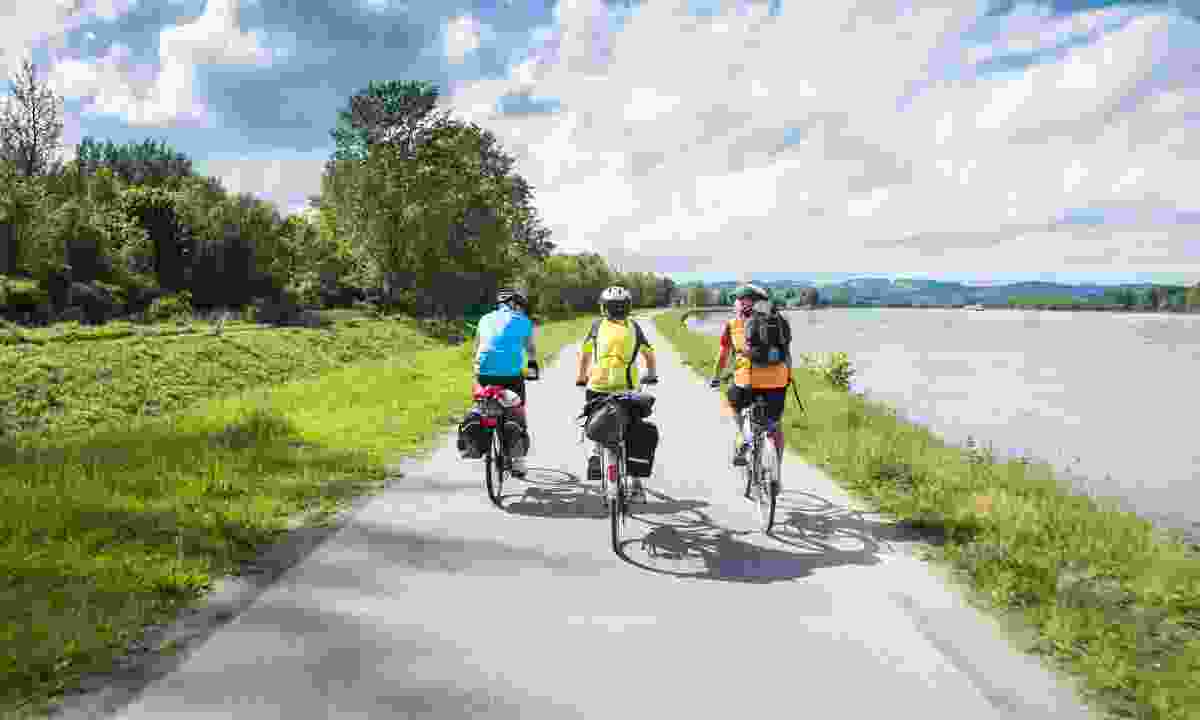 Cycle along the Danube river (Shutterstock)

The gardens, castles and valleys of Germany, Austria and Slovakia will be the backdrop to your trip, which begins in Munich. Here, you’ll have plenty of time to stop off at Bavarian beer gardens while pedalling past the city’s ornate churches and modern museums.

Then cycle past beautiful meadows, medieval villages and castle ruins to end up in Bratislava, where you can lose yourself in the city’s hidden alleyways.

Spend the day in Vienna and spy the majestic Hofburg Palace, St. Stephen's Cathedral and the State Opera House before looping back to Munich to end your trip.

Like this? Read the whole June issue of Wanderlust mag - out now

The best cycle trips in the world (be warned, these ones require pedal power!)

How to explore the Lake District by e-bike

The 24 easiest cycle routes in the world