Whether you’re looking for encounters with sharks and mantas, hoping to escape the crowds or keen to explore underwater wrecks, diving pro Phil North reveals the world's best dives... 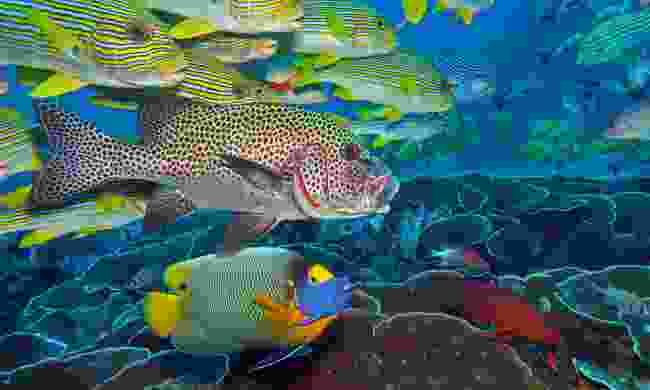 Raja Ampat is an archipelago of stunningly beautiful islands at the epicentre of the Coral Triangle, an area recognised as the global centre of marine biodiversity and a conservation priority. Whilst Raja Ampat comprises over 1,500 small islands and cays, the main four larger islands – Waigeo, Batanta, Salawati and Misool – are known as ‘The Four Kings’ and are at the top of many divers’ wish lists.

Divers and snorkellers are often mesmerised by the sheer density of fish and coral life, and you can expect vibrant, colourful reefs, plenty of macro life, schooling barracuda, manta ray encounters, countless schools of fish (over 1,200 known species are found here), and plenty of drift diving in the fast currents. 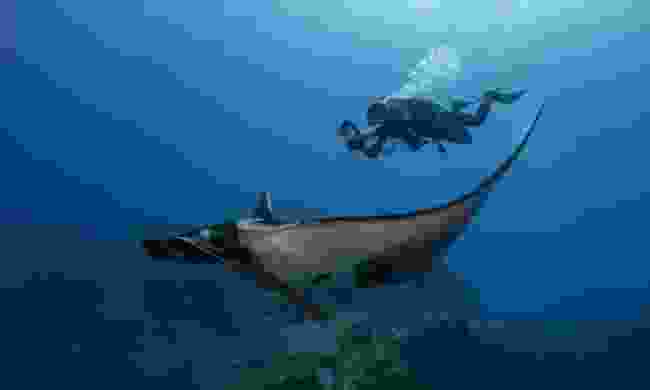 Best for: mantas and sharks

The Revillagigedo Archipelago is located about 400km south-west of the tip of Mexico’s Baja Peninsula and attracts large concentrations of pelagic species, making it a spectacular spot for diving encounters. To divers, it is commonly known simply as Socorro – a world-class destination for close encounters with Pacific manta rays and other big fish.

There are up to seven species of shark at Socorro, plus bottlenose dolphins, whale sharks and humpback whales which come here to breed and calve annually. Other marine life includes yellowfin tuna, wahoo and thick schools of jacks.

Between April and June there are hammerhead ‘cleaning stations’, while May to July is ‘baitball season’, when you can expect intense underwater action and, in general, bigger numbers of each species. Remember to pack your wide-angle lens as the photo opportunities are breathtaking.

Keep in mind, though, that Socorro is suitable for experienced divers and only accessible by liveaboard. 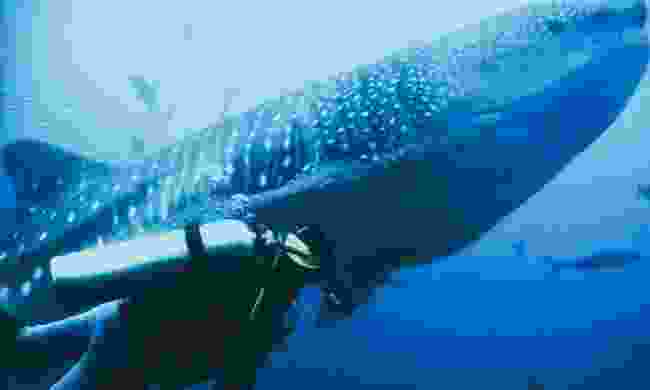 Diving with Whale Sharks near Wolf and Darwin islands (Shutterstock)

Liveaboards head to the Wolf and Darwin Islands for the most exciting underwater encounters in this famous archipelago. These small rocky outcrops to the north-west of the main group of islands attract huge whale sharks, schools of hammerhead and silky sharks, Galapagos sharks, manta rays and more besides, ensuring an incredible show.

June to November is the cooler season, but also brings the best whale shark encounters. From December to May, divers are more likely to encounter schools of hammerhead sharks and mobula rays. Challenging conditions mean these trips are only suitable for more experienced divers.

Most liveaboards offer 17 or more dives during a trip, as well as land excursions to enjoy some of the Galapagos’ unique topside wildlife encounters – the thrill here is that the wildlife can be seen at very close range allowing for amazing photography opportunities. 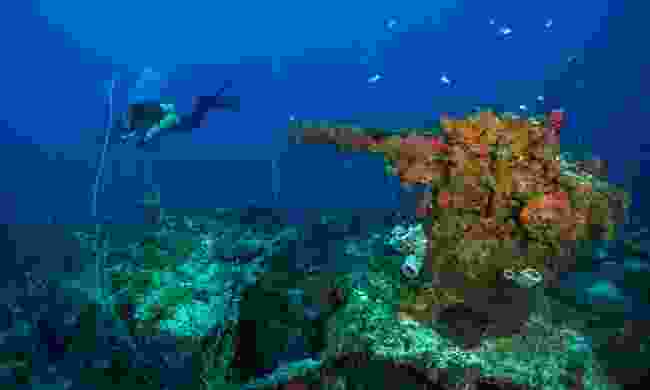 Truk (Chuuk) Lagoon in Micronesia in the Pacific is, quite simply, the world’s greatest wreck diving destination. If you’re into wrecks, this is where you need to be. From the UK, it'll take you about 48 hours to reach. It’s expensive, obscure, unique and only for serious divers with a passion for wrecks.

Is it worth it? Absolutely. In 1944, Operation Hailstone led to the sinking of the Japanese fleet at anchor, creating what is now Truk’s formidable dive site of 60+ wrecks. You can experience the wrecks and their fascinating history by liveaboard or from a resort, during the day and on night dives. You have the option to self-regulate, do up to five dives a day and try deco (decompression) diving.

Very poignantly, you can still see the remains of some of the Japanese sailors who met a violent and watery grave here. 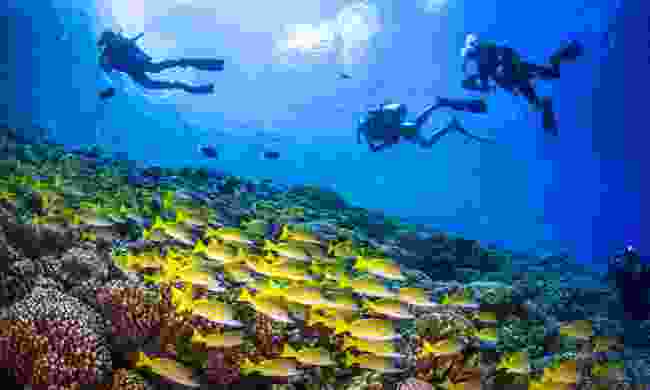 Diving with Yellowfin goatfishes above the coral reef of Fakarava (Shutterstock)

Both the marine and terrestrial wildlife in Fakarava are incredible, and are protected as a UNESCO Biosphere Reserve. The huge rectangular-shaped Fakarava Atoll features two passes which connect the lagoon to the ocean.

With plenty of pelagic encounters, and possibly the highest density of fish life you’ll ever encounter, it’s one of the main reasons to visit French Polynesia, as a diver.

In June/July, huge schools of marbled grouper gather to mate, and it’s also one of the best places to see tiger sharks; humpback whales are frequently seen between July and September. 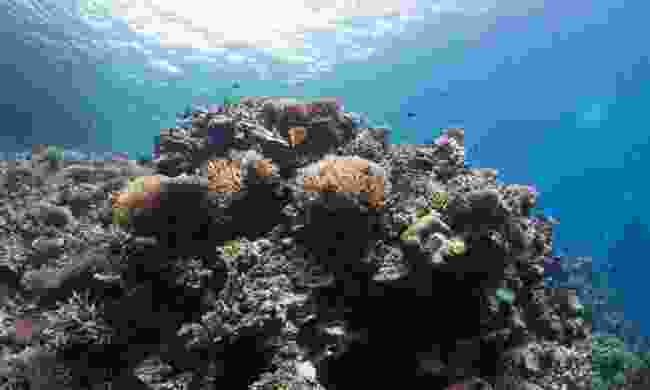 A chain of dormant volcanoes forms the scenic boundaries of Kimbe Bay, on the north side of the island of New Britain, encompassing hundreds of submerged reefs and more than a dozen islands. 70% of all coral species in the Indo-Pacific region are found in and around New Britain, and no other dive area in the world can boast such diversity.

World famous dives such as Emma, South Bay, Inglis Shoals, Susan’s Reef and Restorf Island are only a few of the 200+ reefs and dive sites sprinkled throughout Kimbe Bay. All are pristine and undamaged. The pristine and colourful reefs are home to a diverse and abundant variety of fish, crustaceans and invertebrates.

Larger pelagic species such as schooling barracuda, jacks and a range of shark species are regularly sighted. If you’re lucky you’ll be accompanied by spinner dolphins on the way to the dive site and there is a resident pod of orca in the bay. 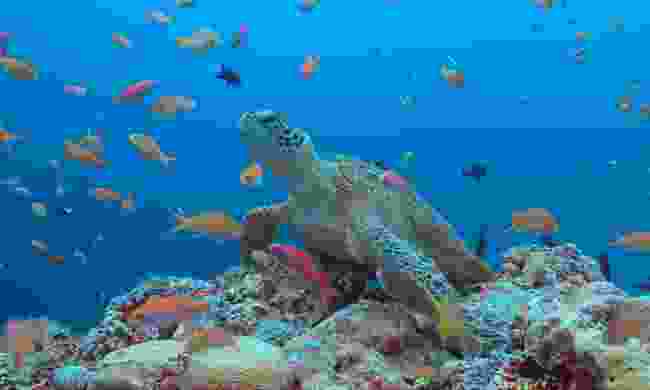 A turtle in Tubbataha (Shutterstock)

Tubbataha Reef National Marine Park is home to some of the best diving in the Philippines and is a UNESCO World Heritage Site. An amazing variety of marine life is found here ranging from colourful reef fish, spiny lobsters, immature manta rays, and turtles in shallow waters, to shoals of Moorish Idols, jacks and snappers in the deep.

The sheer walls are covered in huge barrel sponges and alcyonacea sea fans. On patrol nearby, barracuda, tuna and reef sharks can be seen with manta rays and eagle rays, grouper and sometimes hammerhead sharks passing by.

The area is best explored in season (between March and June) by liveaboard, which offers access to world-class dive sites, and thrilling drift dives with sharks.

Phil North is manager of Dive Worldwide, the world’s leading provider of diving tours. For more information about dive trips to these site and many more around the world, visit their website at DiveWorldwide.com

The Wanderlust guide to diving and snorkelling

Scuba-diving in the Maldives

15 stunningly beautiful shipwrecks you must visit