It's no secret that Croatians like to celebrate all year long. Here’s how you can join them as they welcome in spring, bathe their cities in light, honour their traditions, and simply have a good time...

Rijeka Carnival is the biggest and most colourful in Croatia, and always starts the year off with a spectacular bang. Celebrations begin in mid-January and continue well into February, with a series of parades and celebrations.

It starts with local men dressed in animal skins, the UNESCO-listed zvončari, chasing away evil spirits by clanging huge cowbells. Originally celebrated by the Hapsburgs in the 1800s – then forgotten –  the carnival was revived in 1982, when three groups of masked men walked down Korzo to the bemusement of locals.

Now, hundreds of thousands of spectators line the streets to cheer a kaleidoscope of floats, masked revellers and accompanying musicians. The big event is the International Carnival Parade, which kicks off on the last Sunday of February. It takes the whole afternoon for floats to pass along the main streets and reach the canal, where partying continues well into the night.

Every March, the already beautiful city of Zagreb becomes a canvas for artists who use the latest light projection technology to paint the city in light. The historical centre is illuminated with colourful and quirky images, and throughout the city you’ll find breathtaking light installations and concepts.

Because the festival is held every spring, most of those concepts evoke awakening, new life and growth. After a long winter, Zagreb buzzes with life, with locals and visitors taking to the streets to admire the artworks and celebrate that the warmer weather is coming.

Now in its fourth year, the festival attracts light artists and travellers from all over the world - shedding new light on this stunning city, quite literally. 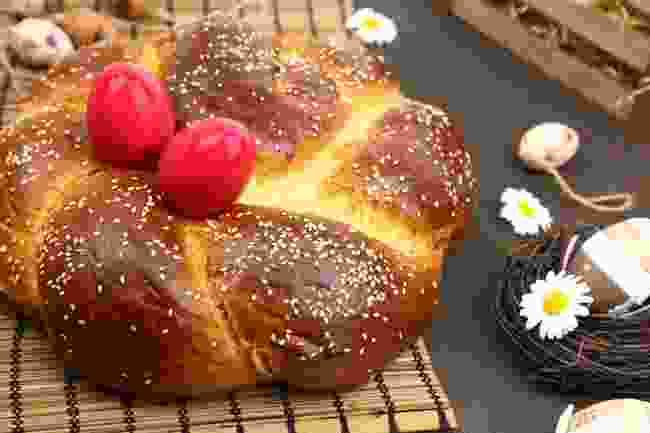 Croatia is a deeply religious country, so Easter is already one of its biggest celebrations. No more so than in Rovinj, where they combine Easter with Croatia’s other great passion – food – in a three day festival of gastronomy.

The focus is on Croatia’s edible Easter delights, such as pinca, fritulica and painted eggs. Visitors get the chance to sample them for free. You’ll also be encouraged to take part in the local tradition of exchanging real and chocolate eggs with one another. All the while, a brass band and the Rovinj Majorettes play joyful tunes to spread the Easter cheer.

Learn more about Easter celebrations on the Croatian Tourism Board website

4. Spring Procession of Ljelje/Kraljice, Gorjani (May) 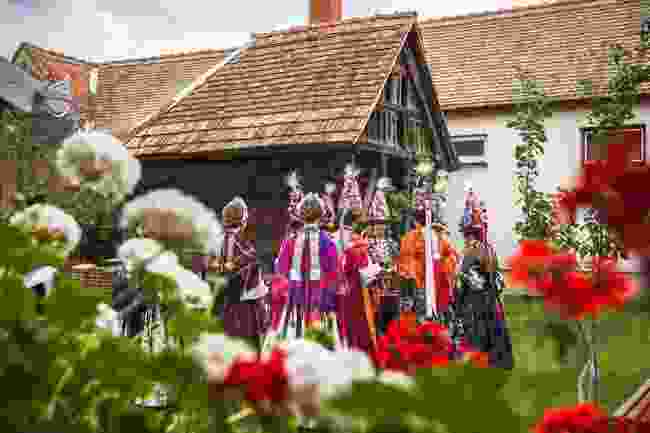 The Spring Procession of Ljelje/Kraljice (Queens) was once widespread across Slavonia, Baranja and Syrmia. Girls of a marriageable age don elaborate costumes, strap a sabre to their sides and and wander through the village, stopping occasionally to sing and dance. Today, it survives only in the small village of Gorjani.

Taking place on Pentecost Sunday, the festival sees girls dress in traditional costumes, parade around the village accompanied by bagpipe (gajde) and tambura players or bećarac singers. Some of the girls wear white wreaths, while others who dress as men and wear hats with flowers on them.

Legend has it that the women of Gorjani dressed in men’s clothing and took up sabres during an Ottoman siege, to make the soldiers think they were ghosts. It remains one of the most unique and colourful festivals in Croatia.

Learn more about spring celebrations on the Croatian Tourism Board website 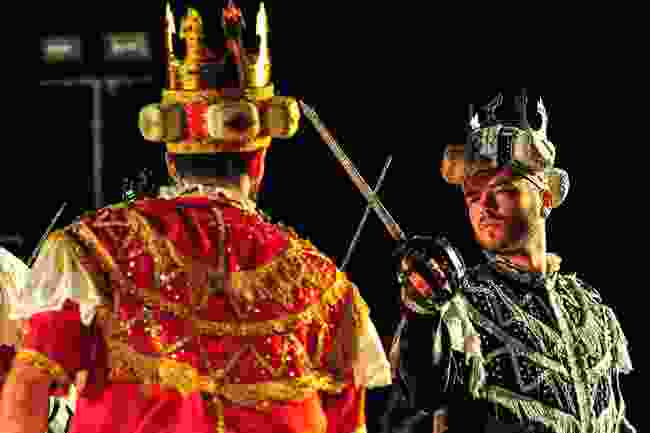 The Moreska Sword Dance is a proud tradition on the island of Korčula. Originally performed to protest again Moorish occupation, this fighting dance was once prevalent across southern Europe. Now, it can be only found on this tiny Adriatic Island, with nine local dance groups dedicated to keeping the traditional alive.

Each year in June, the groups gather from across Korčula and other islands to participate in the annual Sword Dance Festival. Participants dress in traditional costumes, parading through the streets of Korčula Town to Reconciliation Square, where they perform the dance in all its splendid glory, recounting tales of great victories over their conquerors. 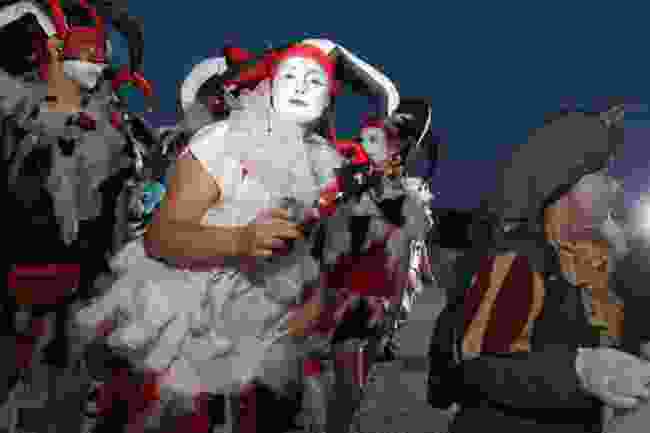 June is a busy month for the people of Korčula. As well as the annual Sword Dance Festival, they also celebrate ‘Half New Year’s Eve’ on June 30, exactly half way into the new new year.

The tradition started 20 years ago and is observed with gusto. The night itself is celebrated with raucous all-night parties and much carousing. Imagine a traditional New Year’s Eve, but with better weather. There is also a packed calendar of events, workshops and street performances in the week leading up to the big night.

Half of the New Year traditional summer carnival celebrates the first half of the year. The event draws in a large number of guests for the night long parties on the streets of Korčula. During the week of the celebration the organisers prepare workshops and street performances. 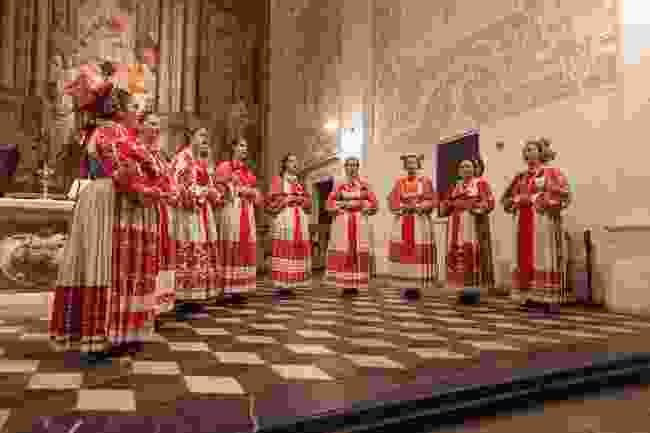 The International Folklore Festival has been held in Zagreb since 1966 and showcases the diversity of the Croatian heritage as well as that of its ethnic minorities. Backed by UNESCO, the festival is the perfect opportunity to witness the traditional and customs that continue to shape the country.

The busy program features performances on the Ban Jelačić Square and Gradec, as well as workshops, concerts of traditional church singing and exhibitions throughout the rest of the city. The festival also includes performances from other folklore groups from around the world.

Learn more about the International Folklore Festival in Zagreb

Also known as the ‘Stroller’s Festival’, Špancirfest is a celebration of the age old art of street performing. Wandering musicians, magicians, stilt-walkers and jugglers are encourage to ‘stroll’ through the pretty cobbled streets, entertaining the visitors and locals who descend upon the town for summer.

There is a calendar of events, workshops and concerts arranged around the festival, but the real joy comes with stumbling upon extraordinarily talented buskers who come to Varaždin from all over the world to showcase their art. For a short time each year, Špancirfest turns Varaždin into the world capital of street music, street theatre and street art.

Learn more about Špancirfest in Varaždin 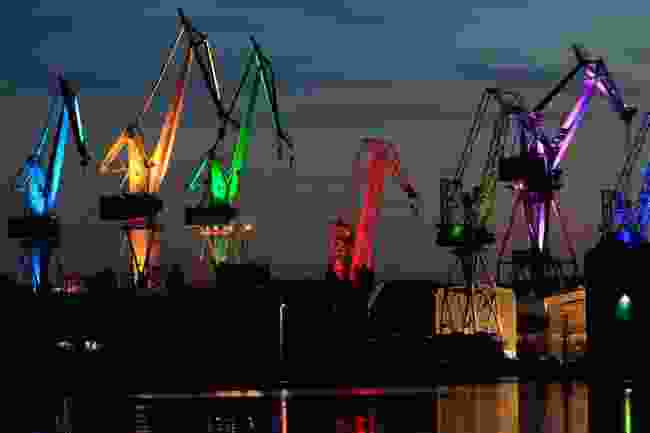 One of the most intriguing celebration in Croatia’s calendar of festivals is Pula’s annual Visualia festival. Using the latest 3D mapping and lighting technologies, the city hosts breathtaking installations creating a magical light display, which is a true spectacle for visitors of all ages.

The main attraction is the Lighting Giants installation in Uljanik shipyard. A series of cranes in the city’s iconic port district are illuminated as part of a light show each evening between 9pm and midnight. Each show starts on the hour and lasts 15 minutes.

A special feature of Visualia Festival is Xica, a recreational night race held through the city bathed in light.

Learn more about Visualia at the Croatian Tourism Board website

More things to do in Croatia:

7 reasons you must visit Rijeka, Croatia

7 free things to do in Zagreb, Croatia