British athlete Jo Pavey sees the best of the Devon and Cornish coasts while training for races. Here, she lists her five favourite paths, ideal for walkers, runners and visitors exploring the area... 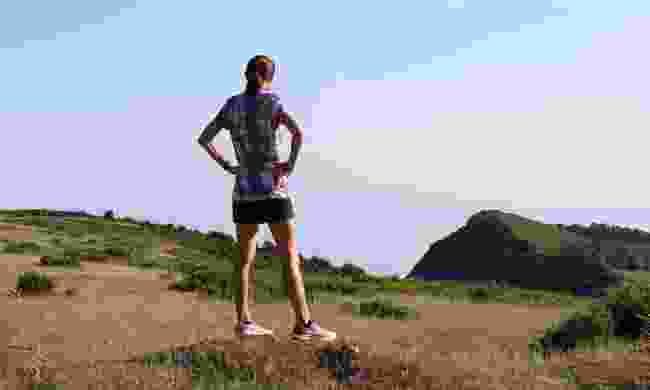 Jo on a coastal trail (SauconyUK)

As a runner, I love to run in beautiful locations. If I’m preparing for racing, I need to ensure that I run at a good pace during some of my training, so a lot of my quicker paced running is carried out on flat, easygoing terrain.

However, running isn’t always about trying to go fast! A large proportion of my training is at a slower, more leisurely pace. For this, I like to head to different locations and enjoy varied terrain. The prettier the location, the better. Running past inspiring scenery really helps boost my motivation, and fully appreciate the joys of the sport.

Thankfully, my home in east Devon is right next to a large Area of Outstanding Natural Beauty, which is crisscrossed by tracks. And in the surrounding regions, I can enjoy wonderful views of dramatic cliffs, pebble and sandy beaches, rolling farmland, woodland and areas of upland heathland and moorland. Walkers can, too, of course.

Here are the best coastal paths to run (or stroll) in the Devon and Cornwall... 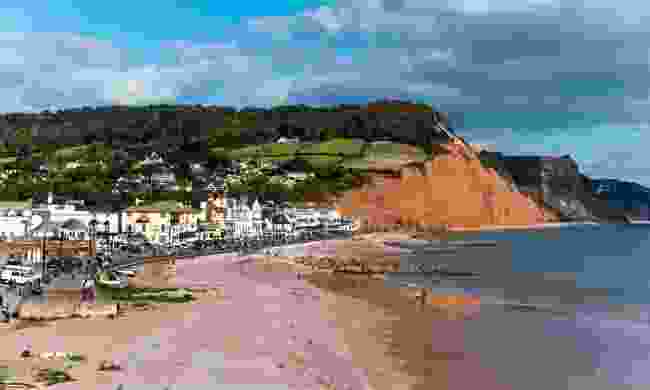 This is my local stretch of coastline and it follows one of the most spectacular areas of the Jurassic Coast. It’s also one of the more severe sections, as the climbs are tough but the views are well worth the effort. You’ll need a good head for heights as the cliffs tower hundreds of feet above the pebble beaches far below.

You have the option to start your run on the promenade in Sidmouth, which hosts a wonderful mix of Georgian and Regency buildings. However, from the promenade you then have to tackle the very steep Salcombe Hill to join the coast path. This is a lung buster of a climb to take on at the start of a run, so I normally drive up and park at the car park opposite the Norman Lockyer Observatory. From here, head east along the coast path towards Beer.

There are options to follow inland paths and you can avoid some of the more extreme climbs, if you choose. Or you can run this as a one-way route (nine miles) or as a long run out and back route (18 miles). Alternatively, you could take an inland route on your return. There are a network of inland paths and country lanes to choose from, but without local knowledge or a decent map/navigation app you could quickly lose your way.

Once in Beer, it’s just another mile or so to Seaton. I tend to finish at Beer, and drive back. There is a bus that you can take back to Sidmouth if you don’t have the option for a lift.

If you stay in Beer or Seaton, local attractions include the Seaton Tramway or the Beer Quarry Caves. My husband, Gav, and some of his friends run to Beer every year on their annual ‘Run to Beer for beer’ (2B4B). It’s not an organised event, it’s just something he and his friends from our village do for a bit of fun. It’s a running group, but the group includes cyclists too, and they take either a road or mountain bike route - meeting up after at the pub. 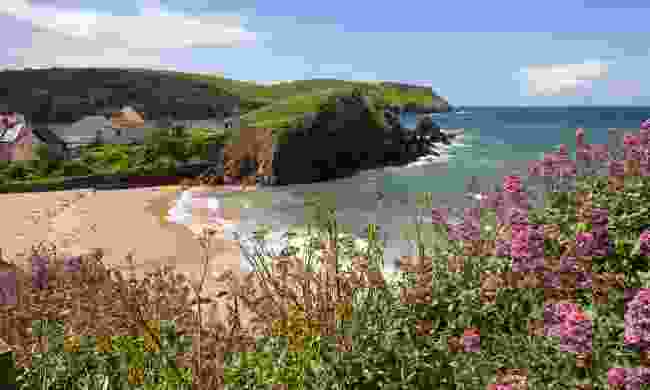 High cliffs, towering above remote little coves, and some spectacular headlands - this is truly a fantastic stretch of path. Rugged rocky outcrops, bracken and heather give this area a wilder feel similar to the moors, especially when windswept in the midst of winter.

The estuary at Salcombe is beautiful and if you fancy cooling off, it has some sandy beaches. If you need a rest during this run (or walk), you'll also find other places for a dip in one of the small coves. Hope Cove gets pretty busy in the summer and I’ve only run this in mid-winter, when it’s much easier to park and for the most part, the path is all yours.

The start point is near the lifeboat station in Inner Hope, where you’ll see some steps which will lead you up a steep climb to Bolt Tail. Follow the path and you’ll cross Bolberry Down and then on to Soar Mill Cove. This little beach is a great spot for a quick dip in the sea.

From the beach, cross the small bridge and follow the signs for Bolt Head or Salcombe. Along the way, you may spot a wild pony or two. Beyond Bolt Head you’ll eventually hit the road leading down to South Sands Beach, and if you want, you can continue towards to Salcombe town centre. 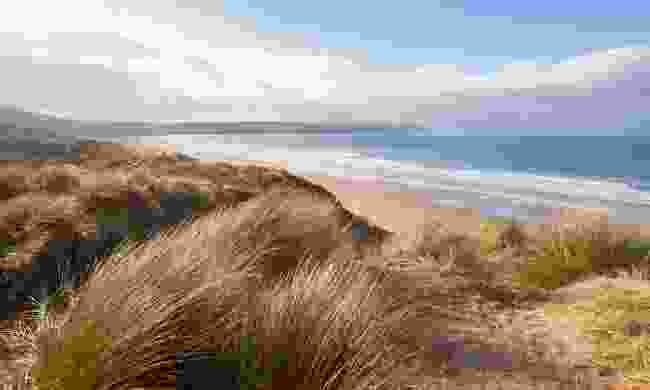 Windswept grass on the sand dunes above Woolacombe beach (Shutterstock)

I’ll often make a beeline for the Baggy Point footpath when in north Devon. This area is a sight of special scientific interest, due to its geology. You can run this as a circular loop and I add in the beach from Putsborough to Woolacombe, although you will have to time your trek with an ebb or low tide to do this.

You can start in Croyde, or there is also a National Trust car park at the start of the path. This car park is probably the best place to park and start your run if you’re not staying in Croyde. This path is moderate to begin with, but as you climb steeper and head towards the spectacular Baggy Point it gets very narrow, so be extra careful - it’s a long way down to the base of the cliffs!

Not far beyond the houses near the National Trust car park, you’ll come across some huge whale bones beside the path. Out to sea, if it’s a clear day, you’ll see Lundy Island and the Welsh coastline. If you get very lucky, down below the cliffs you might spot a grey seal.

Once you reach Baggy Point headland, you'll see Mortehoe headland to your east, which lies beyond Woolacombe Beach. My family and I often camp out in Mortehoe if we’re not staying in Croyde. Then, I'll run this route in reverse.

During the run, you’ll have the option to head down to the beach and run to Putsborough, or take the SWCP path through the dunes behind the beach. Another option is Marina Drive above the dunes – which is a scenic car park stretching along the hill side.

If the tide is out, I always take to the beach here. I normally run right at the waters edge where the sand is firmer. A good plan is to run a loop using two of the above combinations. 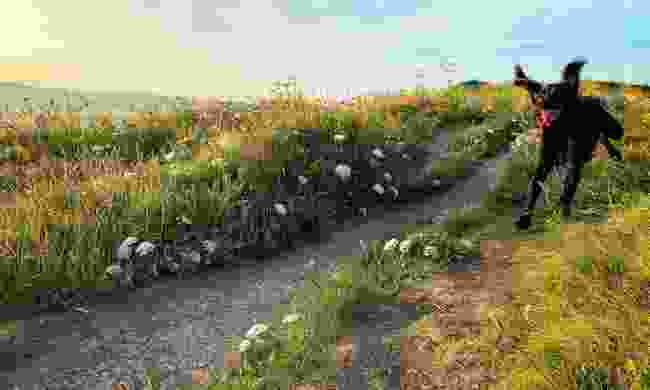 The far west of Cornwall has some of the finest coastal scenery in the country. This section of path to the Lizard peninsula is exposed with high cliffs and some lovely coves, but it also has some simpler sections of trail, making it more accessible for runners and walkers.

Although you’ll do a reasonable amount of climbing - the cliffs are about 1,500ft tall according to my sports watch - this route doesn’t really feel too demanding.

You’ll pass Parc Bean Cove and on to Kynance Cove. Kynance is beautiful and a perfect for a mid-run or mid-walk dip. At low tide you can run along the beach, but if not follow the path by the cafe.

Back up on the cliffs, you’ll pass Pentreath Beach, around Old Lizard Head and then on to Lizard Point. You’re now at England's most southerly point! You can then head inland to Lizard Town to complete your run. There are buses in both Poldhu and Lizard Town, so it is possible to catch a ride back. 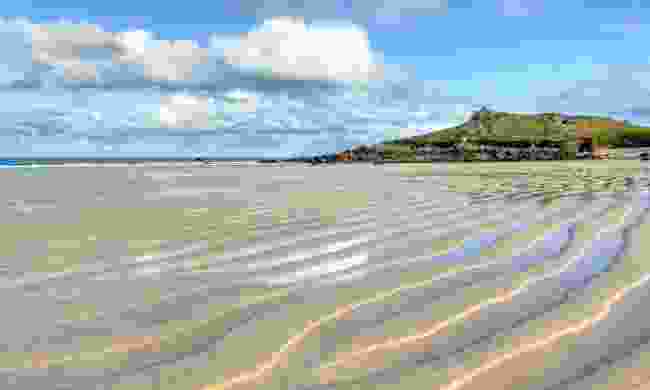 This isn’t a run for the faint-hearted. With around 3,000ft of climbing and lots of rocky sections, don't head here for a fast paced run. But if you’re after remoteness and supreme natural beauty, then this is the run for you.

You’ll need to take some precautions as there aren’t many major settlements for an easy bail out point. I’d pack plenty to drink, some high energy snacks, an extra layer of clothes and a phone.

There is a bus stop at each end of the route so you can get back to St Ives. The area is beautiful with moorland sweeping down to tumbling surf and rugged cliffs. Start your run behind Porthmeor Beach to the west of St Ives and follow the Acorn South West Coast Path sign posts. 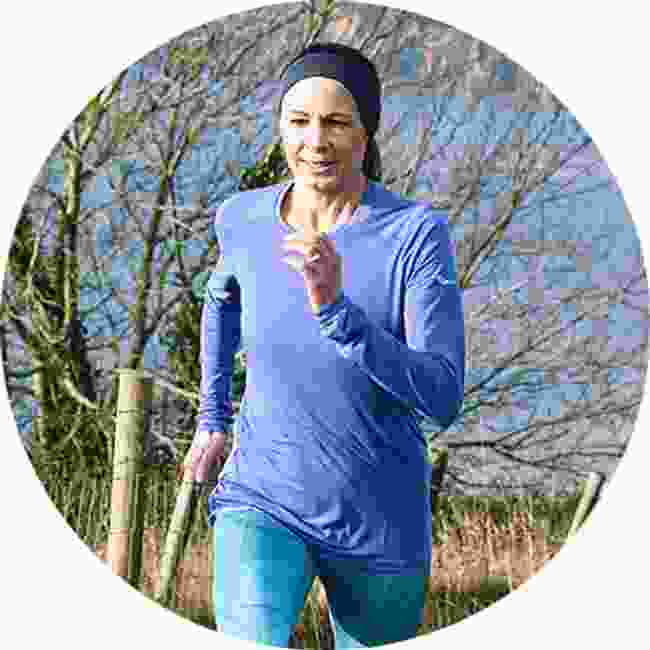 Jo Pavey is a British long distance runner and Saucony UK ambassador. She is a World, European and Commonwealth medallist and was awarded an MBD for services to athletics in 2015.

She wears the Peregrine ISO for all of her off-road running, available from Saucony.

5 of the most beautiful cycle routes in south-west England

5 adventurous things to do in south-west England this weekend