It’s not all blue skies and beach bars on Caribbean islands. The lush mountainous interiors offer some of the best hiking around. Expect rainforest, bountiful birdlife and spectacular views... 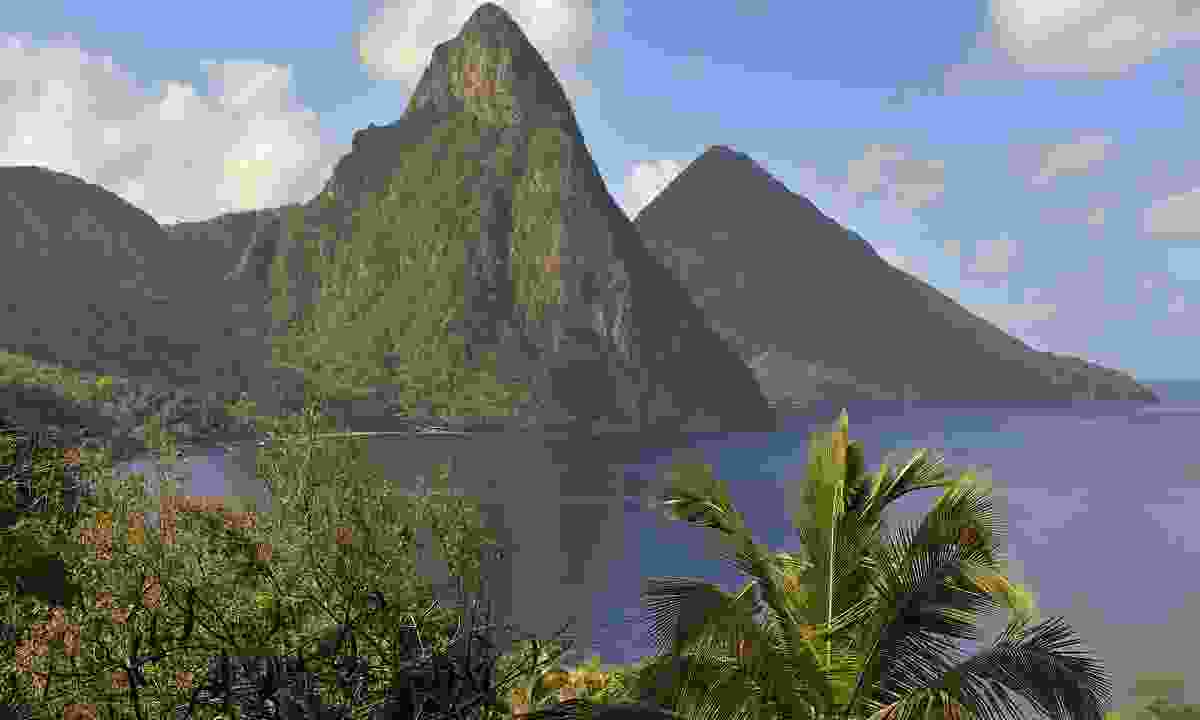 Intensely green and dominated by a pair of jagged, volcanic peaks, Saint Lucia is a natural gem adrift the azure waters of the eastern Caribbean. The coast is home to volcanic beaches and reefs. The interior is thick with trees, dotted with waterfalls and criss-crossed with trails. With 77% of the island covered in forest, nature is never far away.

The twin peaks of the Pitons are a protected UNESCO World Heritage Site and Gros Piton, the less lofty of the pair, is the island’s most popular trek. Guides are easily found in the village at the base of the mountain, and the four-hour hike will reward you with some of the most amazing views in the Caribbean.

Elsewhere, the Tet Paul Nature Trail is a more gentle introduction to the island’s charms, while the Edmund Forest Reserve is a great place to spot some of the island’s 186 species of birds, including the rare St. Lucia parrot. 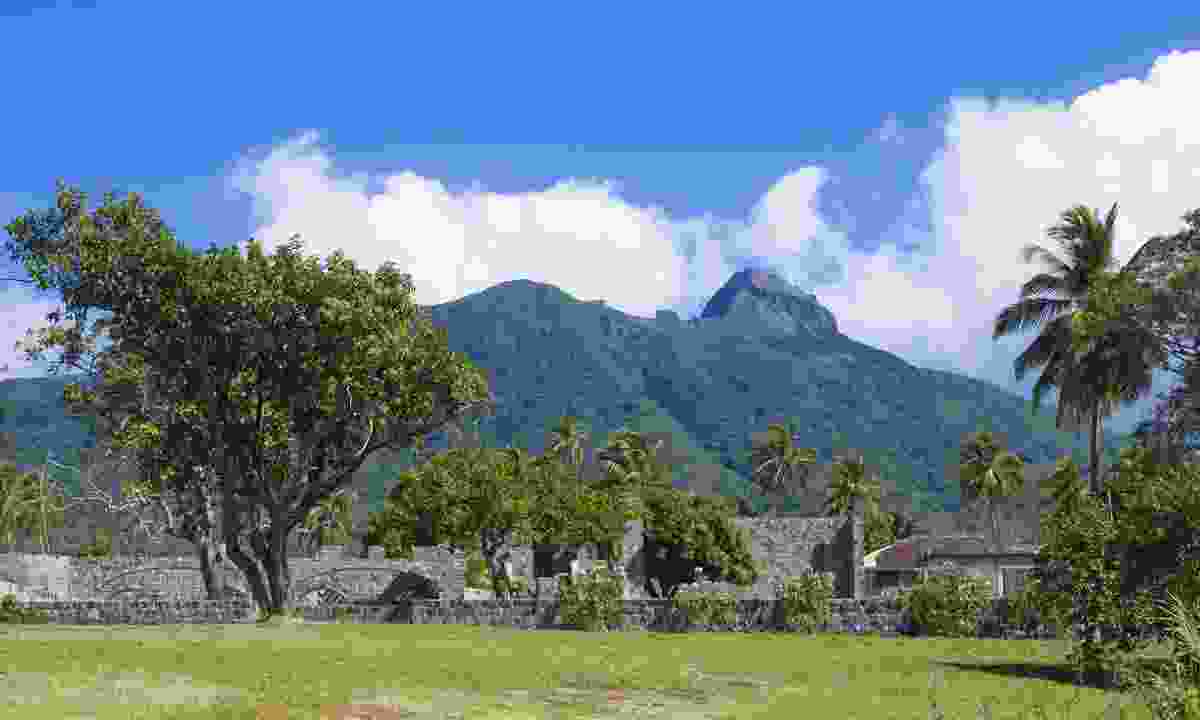 Ruins of a sugarcane plantation in front of Mt Liamuiga (Shutterstock)

More than a quarter of the tiny Leeward Island of Saint Kitts is a designated national park, and much of that is covered in rainforest.

A strong conservation ethos on the island has seen the amount of rainforest increase, bucking a global trend, and providing a vibrant home for wildlife including green vervet monkeys, rare lizards and elegant hummingbirds. A number of easy trails lead through the park, many stopping at natural springs, ideal for a quick mid-trek dip.

Mount Liamuiga, sitting in the north of the islands, offers more of a challenge. Rising 1,210m, this dormant volcano is one of the few true mountains in the Caribbean. The two-hour trek to the summit will take you through farmland and mango orchards, rainforests and cloud forests, until you emerge to find a crater rim half a mile wide, known as the Devil’s Tooth. 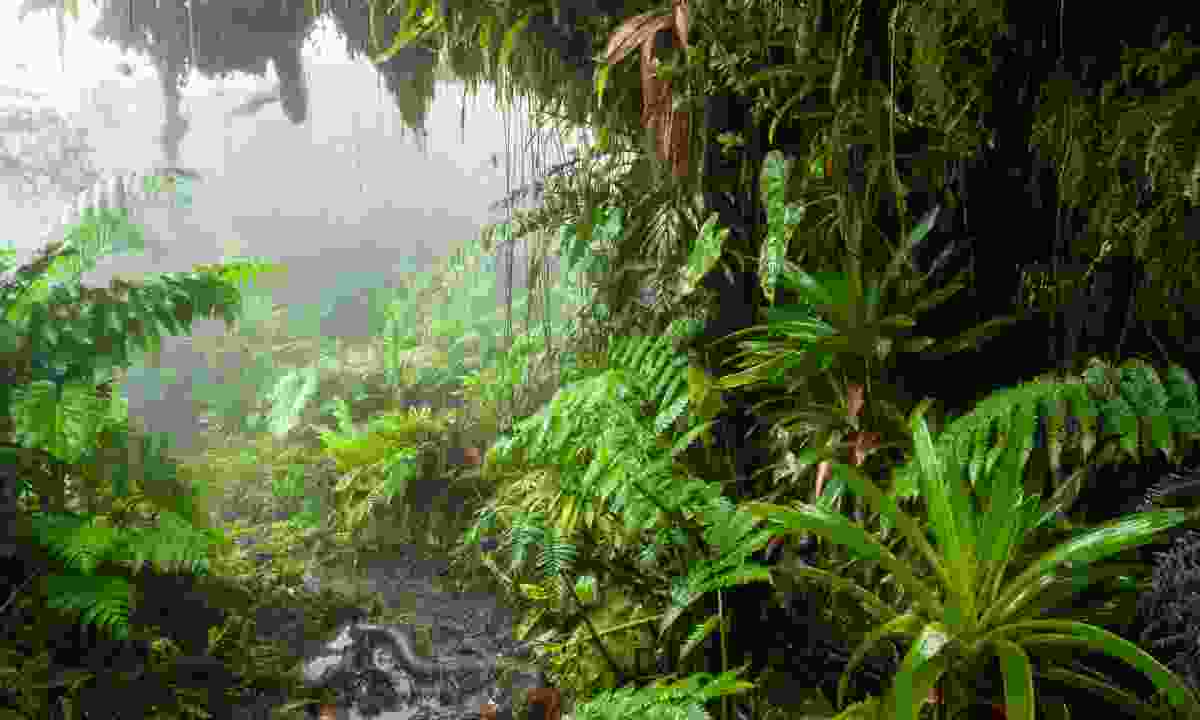 A path through the rainforest on Saba (Shutterstock)

Ringed with near-impregnable cliffs and surrounded by a marine park, Saba is renowned for its excellent hiking and diving.

The Mount Scenery trail starts in Windward Side town and upon reaching the top, hikers can rightly claim that they’ve climbed the highest mountain in the Netherlands. Saba is a Dutch dependency, you see, and at 887m tall, Mount Scenery towers over the piddling peaks back in the Mother Country. 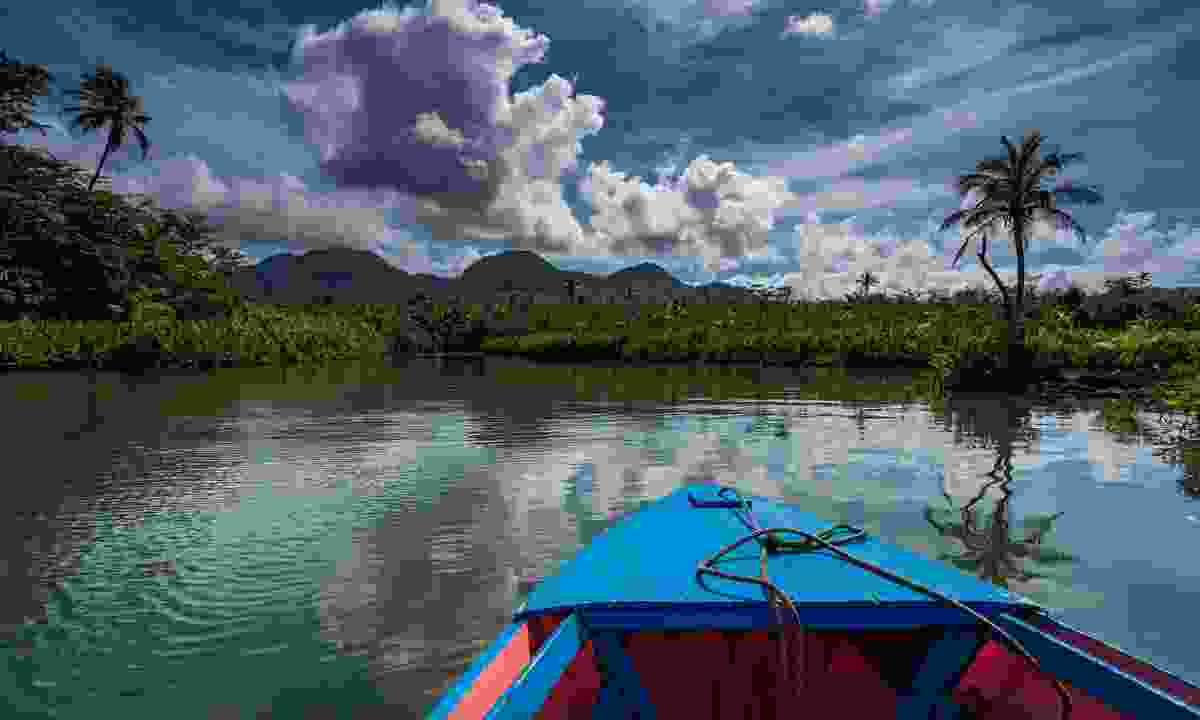 Travelling by boat in Dominica (Shutterstock)

Nicknamed ‘Nature Island’, Dominica has long been a favourite with eco-adventurers and travellers of a more independent persuasion. Largely spared the development that has blighted some islands in the region, it is a verdant oasis of rainforests, hot springs, nature and, notoriously, a boiling lake.

It is also home to the Caribbean’s first long distance hiking path, the Waitukubuli National Trail. Beginning in the southern village of Scott's Head and ending in the north at Cabrits National Park, the 115-mile long trail takes two weeks to complete and passes through the island’s most famous natural attractions, including Morne Trois Pitons National Park and Morne Diablotins.

Thankfully, the trail is divided into 14 sections, offering visitors the chance to experience the island’s natural beauty in bite-sized segments. 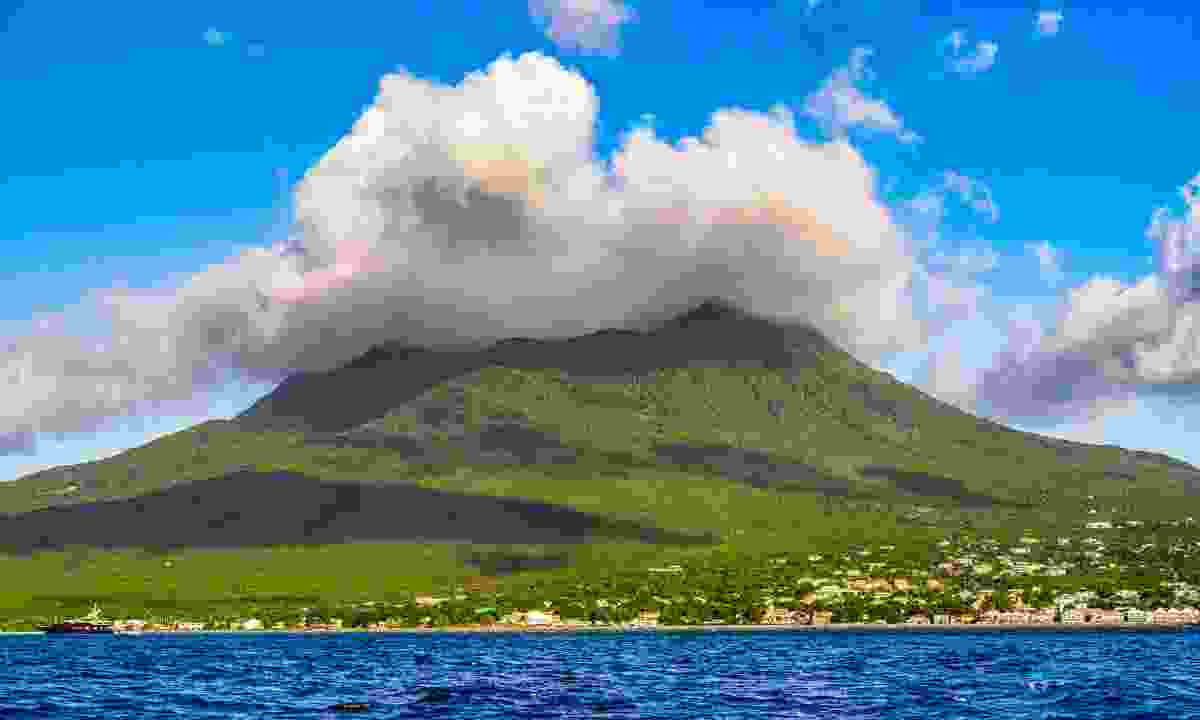 The smaller sibling in the Saint Kitts and Nevis Federation, Nevis is similarly dominated by a volcano. Simply known as Nevis Peak, this benign-looking volcano, draped in green, has entranced all those that set eyes on it, from Christopher Columbus to Diana, Princess of Wales.

Don’t be fooled by it’s seemingly gentle slopes. Conquering Nevis Peak is tricky and challenging, with some sections where you’ll need to haul yourself up using pre-rigged ropes. Decent gear and a guide are highly recommended – the trail is slippery, steep and muddy.

The views from the top, however, are sensational. And when you sip on a rum punch from a bar on Pinney’s Bach later that night, you’ll know you’ve earned it. 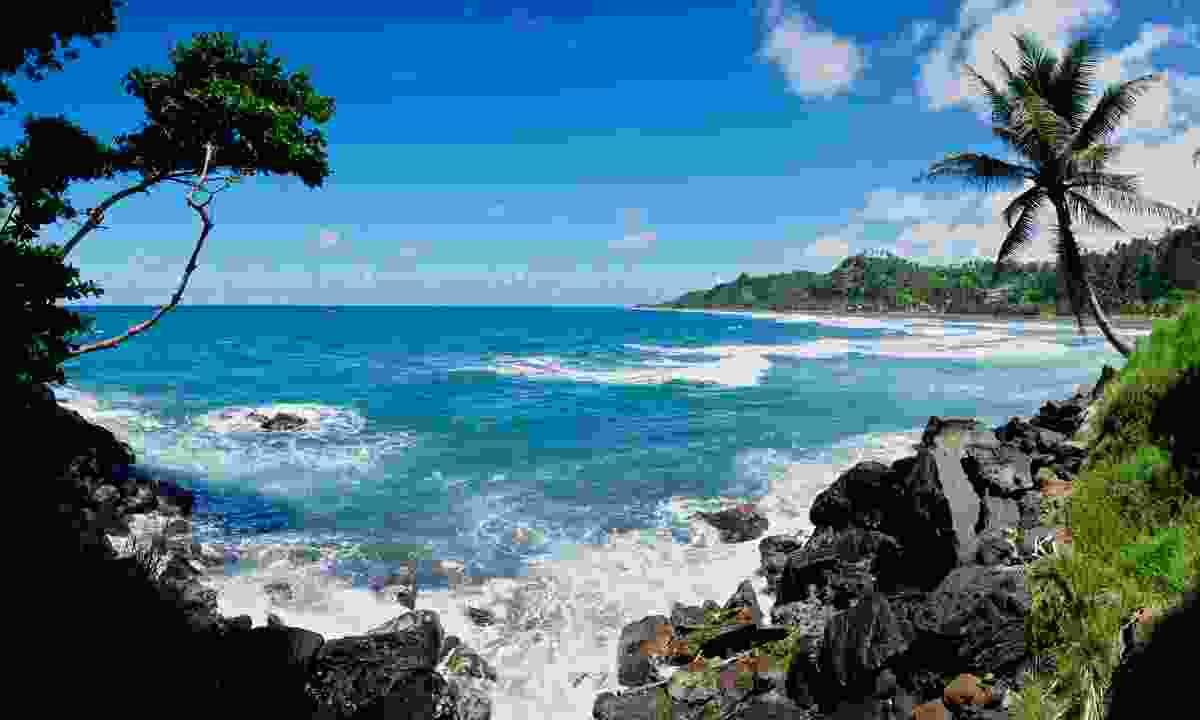 From the grumbling slopes of an active volcano to more gentle tracks that lead to empty white sand beaches, the Windward Island of Saint Vincent has a surprising variety of trails to tempt visitors way from the sun chair and into nature. Each reveals a different side to the island’s character, challenging and rewarding travellers in a variety of ways.

La Soufriere Volcano dominates the north of the island and provides the most challenging trek, a five-hour yomp that winds its way through rainforest and cloud forest to a desolate landscape of volcanic rocks, steaming cauldrons and sulphur-ringed rims.

Another popular – and less demanding trail – will take you through lush rainforest to Dark View Falls, where two spectacular waterfalls, one above the other, cascade down high cliff faces and plunge into natural pools. Birdwatchers will want to walk the Vermont Nature Trail for the chance to spot the famous Saint Vincent parrot in its natural habitat. 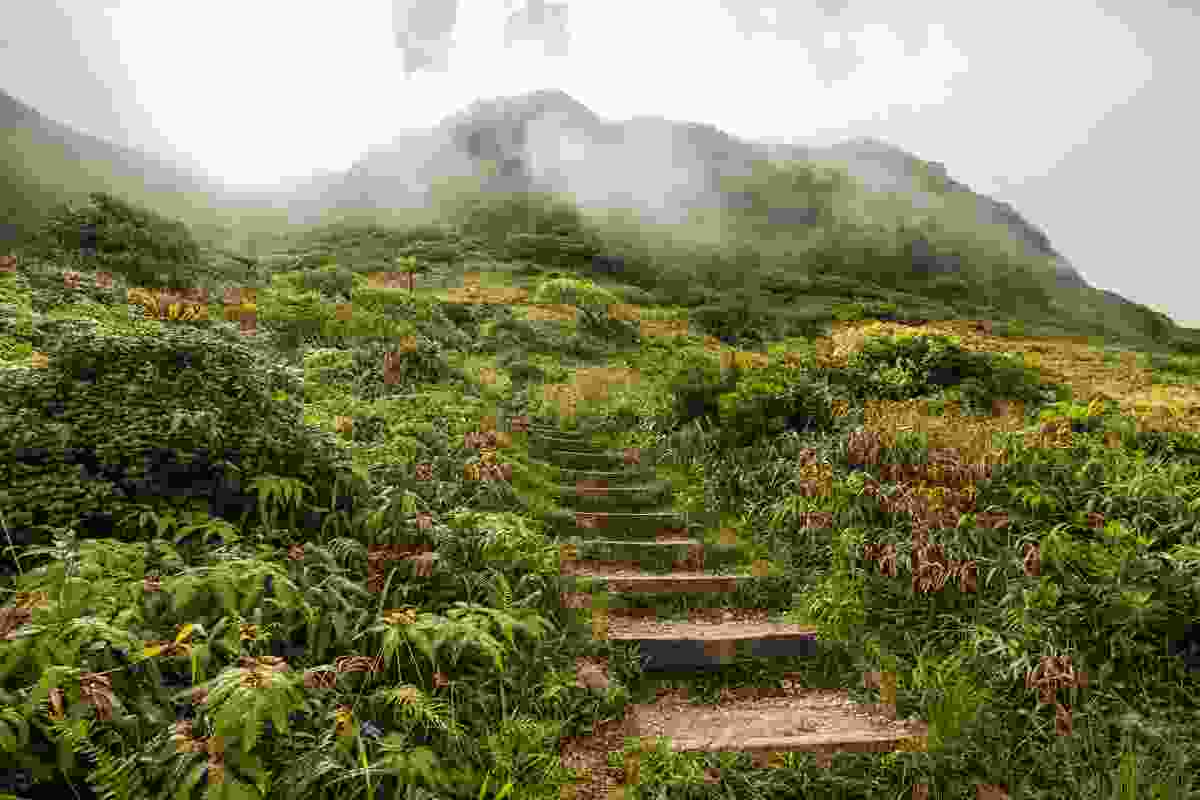 People are often surprised to learn that the beautiful and sophisticated island of Martinique offers some of the best hiking in the Caribbean.

Known as ‘traces’ – and often following trails used by early settlers to traverse the islands – they reach into every corner of the island. In total, they are over 350km long.

The traces in the south of the island offer a gentle introduction to the island’s charms, following the coastline and taking you from beach to beach through coastal forest, mangroves and a variety of rocky and sandy zones.

Mont Pelee, the active volcano in the north, provides a stiffer challenge, as does Pitons du Carbet, a trail through some of the oldest plantations on the island as well as untouched forest. 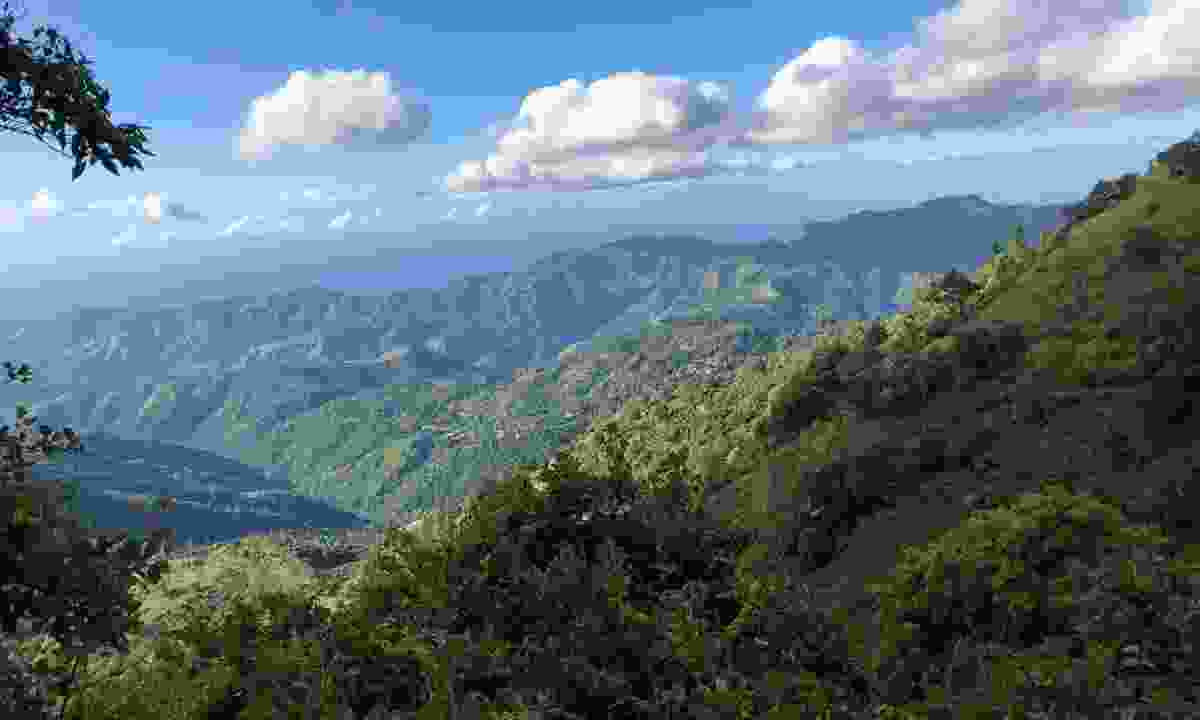 View over the valley from the Blue Mountains in Jamaica (Shutterstock)

Jamaica may not be the first place you think of when it comes to hiking and nature, but beyond the bright lights and reggae beats of the coast lies a lush, green mountainous heart just waiting to be explored.

The Blue Mountain Peak Trail is the most famous trail and has the added bonus of the opportunity to sample the world-renowned Blue Mountain Coffee at the source. The trail to Catherine’s Peak nearby is also popular while Holywell National Park offers the chance for you to dip your toes, quite literally, into this beautiful part of the world.

Those kicking back in Montego Bay should consider the Mount Zion Hill Walk. This moderate two-hour walk will take you through the bush, along Zion Ridge, to an authentic Jamaican rural village that dates back to 1861. 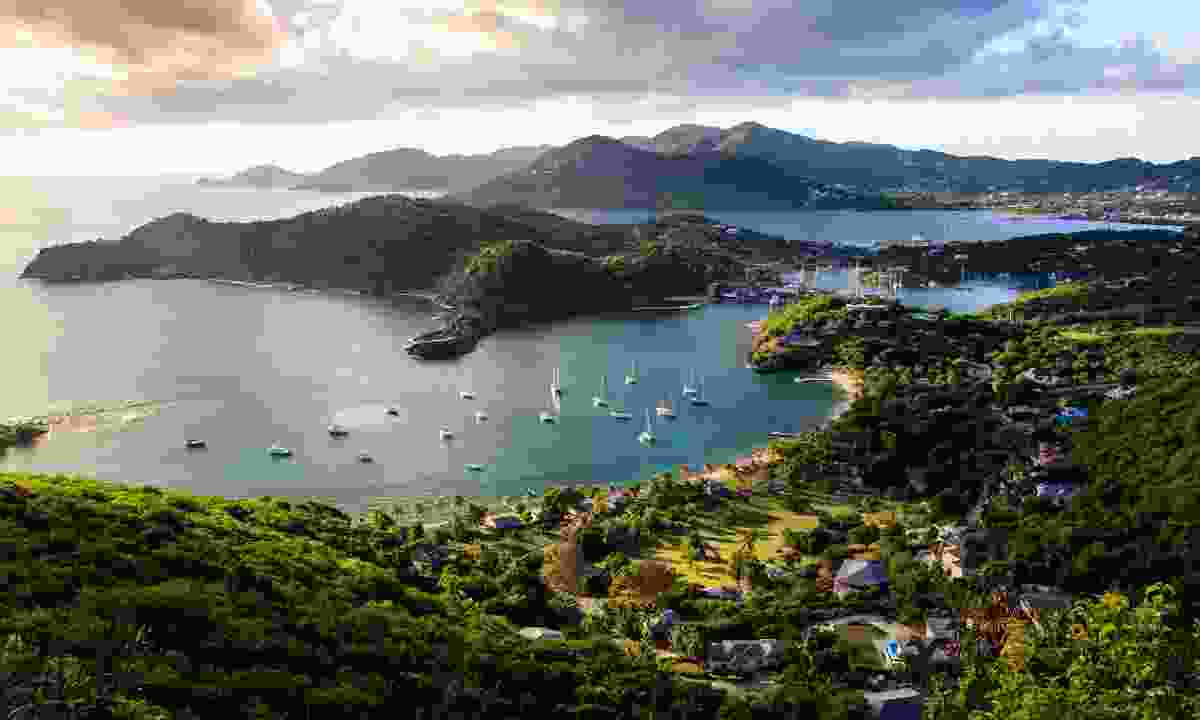 Antigua is the Caribbean’s driest island, and while that’s a definitely a relative term – there’s still plenty of pockets of lush green forest to tramp through – it means that hiking here is not as wet and uncomfortable as some of the other islands in the Caribbean.

The trek from Jolly Harbour to the top of Mount Obama (renamed when the former US President visited in 2008) is popular, especially in the company of Vorn Johnson, a guide with Hike Caribbean. He has an encyclopaedic knowledge of the local flora and fauna. Intriguingly, he once collaborated with Grandmaster Flash during an ill-advised sojourn in New York.

The coastal trail from Galleon Beach up to Shirley Heights is equally popular, rewarding hikers with a view back of English Harbour and stop midway at Mermaid Gardens, a natural swimming pool, carved by nature into the rocks. Trinidad’s colourful capital, Port of Spain, is famous for its boisterous carnival, perhaps  the most flamboyant outside of Rio. Head into the island’s lush interior, however, and you’ll find a lost world of rainforest, waterfalls and abundant birdlife.

There’s a trail for every level of endeavour and specialist interest. A hike to the bat caves on Mount Tamana in the Central Range will introduce you to the island’s most populous inhabitants. The trek to Saut d’Eau through Paramin and over the top of Barre La Vigie is the only way to a deterred beach where waterfalls cascade into the sea.

The trails on El Tucuche offer your best chance of spotting a rare golden tree frog, while the walk along Guanapo Gorge offers a bit of everything – rainforest, canyon walking, and the chance to simply jump in the river and be carried along by its gentle current. 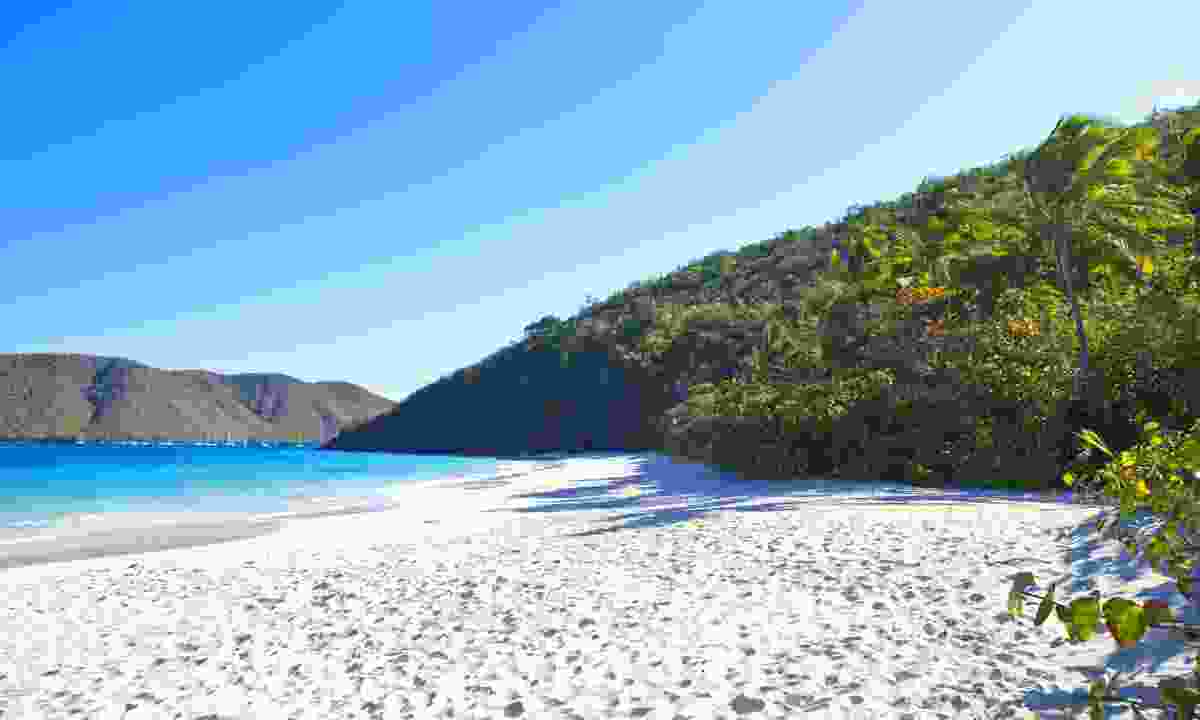 The smallest of the USA’s three Virgin Islands, Saint John is also the most pristine. More than two-thirds of the island form part of the Virgin Islands National Park and there isn’t an airport or cruise ship dock to disgorge thousands of day trippers. With more than 20 trails fanning across the island, Saint John is best explored by foot.

St John is rich in both nature and history. The island is blessed with thick rainforests and pristine beaches, as well as petroglyphs left by ancient inhabitants and abandoned mills and slave quarters from darker, more recent times.

The forests shelter resident and migratory birds. The mangroves support incredible corals and anemones. And the turquoise waters surrounding it is bursting with dolphins as well as hawksbill and green turtles.

More reasons to visit the Caribbean:

7 of the best wild and adventurous stays in the Caribbean

5 reasons you must go to Antigua