Drink it in! 7 beautiful British beer gardens to relax in this summer

The sun is out and the heat is on. Stay replenished with these great British pubs that serve up hearty food and a fine selection of chilled beverages – with a picturesque backdrop to soak in the sun... 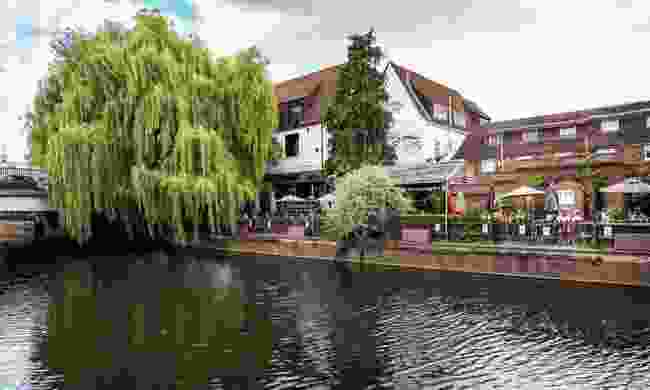 The Waterside Inn was crowned winner of Britain’s Best Pub Garden for its charming riverside setting and tempting whisky selection, whereby pub-goers can request a passport to sample the smoky liqueur flavours from around the world – if you try four you get one free.

But its main attraction awaits outside, where shabby-chic bunting is strewn overhead and fairy lights glow in the reflection of the River Lea that runs parallel. Visitors can enjoy a succulent burger fresh from the barbecue, washed down with a chilled pint at one of their summer BBQs, with views of narrowboats tracing the water downstream and ducks waddling along the riverbanks.

If you can’t wait until the weekend, join their Wednesday interactive quiz night, which proves a popular hit with the locals, as well as live music events throughout the week. 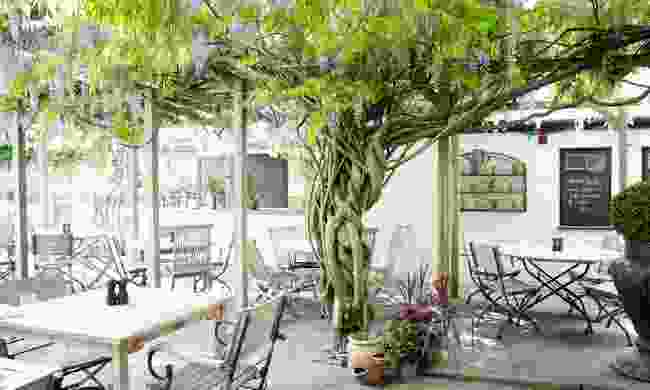 Take a seat under its beautiful wisteria tree (The Albion)

Take a break from the towering skyscrapers and overheated congestion of Central London and unwind at The Albion. This idyllic hideaway in Islington is enough to make Londoners feel an escape from the city, without having to go the distance.

Head out to the garden on a summers day to sip on a glass of crisp sauvignon under the canopy of a blossoming wisteria tree that stars as the main attraction. Its lavender-purple hue flowers can be admired taking the shape of party streamers from overhead and aside, while fairy lights wrapped around trees brighten the atmosphere by night. 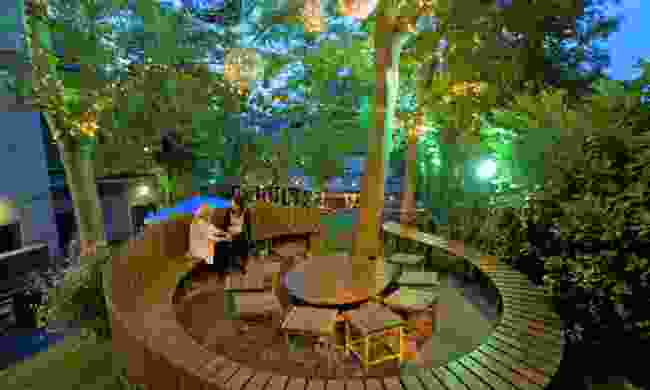 Perch on a bench and catch up with friends (Brel)

The taste of summer is in full flow at Brel as Pimms is served chilled from the tap, while its drinks menu features 60 international craft beers and 21 Scottish gins cater to all palates. With your choice of beverage in hand, head to the beer garden and take your pick on where to perch. Its canopy of night lights keeps the evening in full swing, while wooden stalls dotted along the grass verge are an inviting spot to perch.

Its newly built fire pits are a good excuse to gather friends for a cosy evening of cocktails and toasting marshmallows by the fire. You may even find yourself tempted by additional dessert side dishes, including melted chocolate and S’mores. 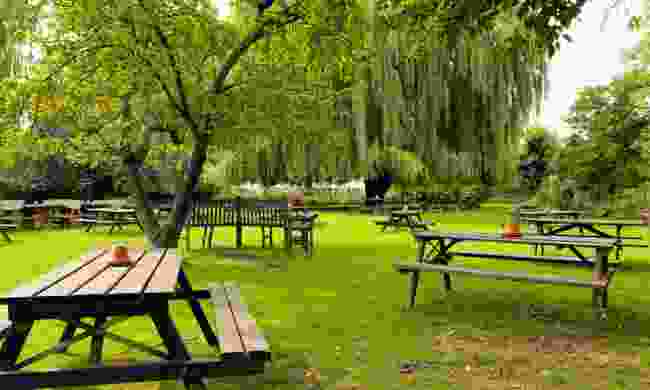 Soak in the sun in its spacious beer garden (The Perch)

The Perch pride themselves on being an Oxford institution as old as its world-renowned university, making them one of the longest running pubs in the quintessential English city. Its remote location allows pub-goers to take in the lush meadows and greenery on a stroll along the River Thames to find this traditional 17th-century country inn.

When you arrive, take time to explore the beer garden that is dotted with large casks and majestic overhanging willow trees, before taking a pick of benches to refuel at. Also worth appreciating is its British farmhouse themed food menu, which has warmed the appetites of some of Britain’s best poets and authors. 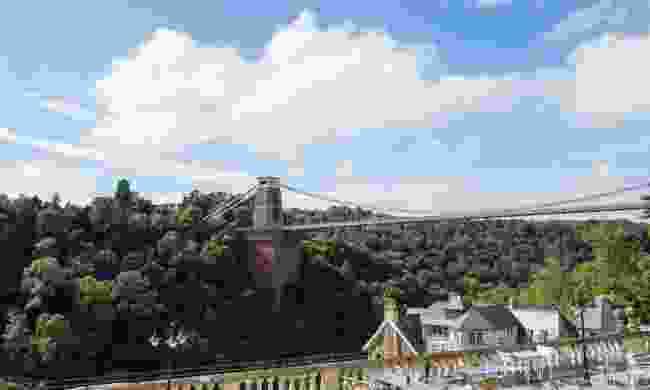 If you’re seeking a spot to unwind on the city outskirts of Bristol, look no further than Avon Gorge Hotel’s White Lion Bar. Though it is a terrace rather than a garden, who could deny a chilled beer with unparalleled views of the South West stretching from Clifton Suspension Bridge to the hills of Somerset and beyond.

The spacious terrace seems a world away from the heat and bustle of Bristol, with a beautiful backdrop that has proven popular for weddings and summer parties – not forgetting a hog roast barbecue. Their food menu extends to specially handmade British finger foods, including pork pies and sausage rolls, paired with traditional condiments of English mustard and pickle – you really are in for a treat. 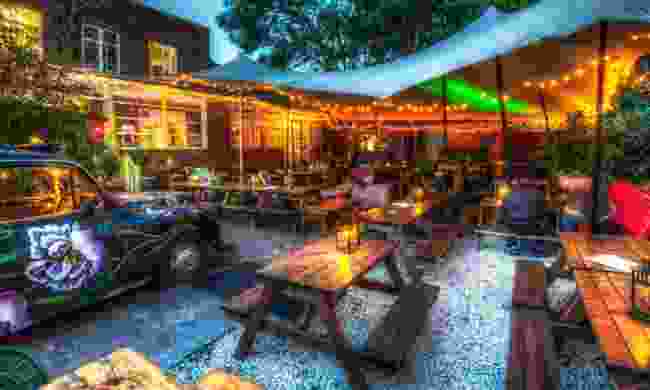 With a black cab parked out back and outrageously eccentric décor, this is by no means your traditional British beer garden. The Magic Garden’s maze of floral artworks, mismatched furnishings and outlandish colour scheme seems more fitting for a bohemian sanctuary than an English bar in Battersea. Yet its quirky and good-vibe nature sends a warm invite to all.

Whether you have an ear for reggae, hip hop, funk or folk, head along on the weekend for a long summer’s night of entertainment, shared by live bands from around the world. But why wait until the end of the week when there are free gigs on Wednesday and Thursday evenings, where guests can unwind to jazz and blues genres. 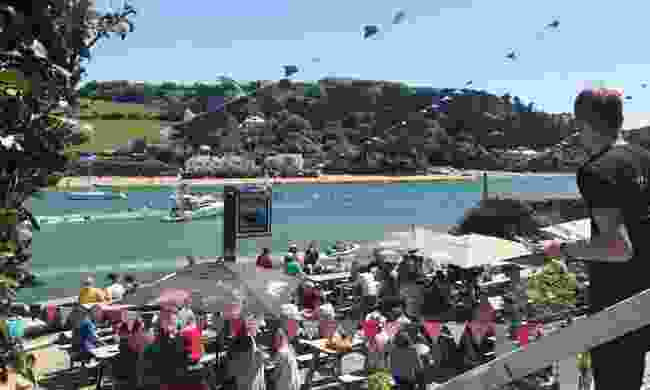 Soak in the sea views (The Ferry Inn)

With breathtaking harbour views and its very own gin distillery, a trip to Salcombe is a must when exploring the South Devon coast. The Ferry Inn offers a picturesque spot to sample locally sourced seafood and watch boats sail along the reflective waters, with the quaint village of East Portlemouth on the horizon.

Join their steak and quiz night, on every Thursday, which sees two generous servings of West Country steak with all the trimmings. You won’t be the only one in for a treat, as this dog-friendly pub serves treats to beloved four-legged companions.

What better way to spend the British summer than with a refreshing glass of locally distilled Salcombe Gin in hand, overlooking one of England’s finest coastal landscapes?