Benedict Allen: "It's an intriguing time when anyone can go off and discover the world"

We catch up with Benedict Allen as he reflects on his time spent with tribes in PNG, being the last of a generation, and why the golden days of exploration still lie ahead...

Where do you think explorers fit into the modern world?

The era of the 'classic explorer' is gone. I was lucky to be a part of that last generation who could just disappear for six months; those other worlds have shrunk down now. But the word 'explorer' needs to be redefined, as it's something we all do. The world has never been more accessible – and not just to those with the skills or money. It's an intriguing time when anyone can go off and discover the world around them.

What would you say to someone wanting to become an 'explorer'?

I think you have to give it a go. Don't think about a 'career' in exploration – I don't think it's viable unless you're incredibly lucky. Just throw yourself at it. But it needn't cost money, it's about experience and just hurling yourself into the place. Don't think about being vulnerable because the more open you are to a place, the better. If you're really trying to explore somewhere, you have to be open. 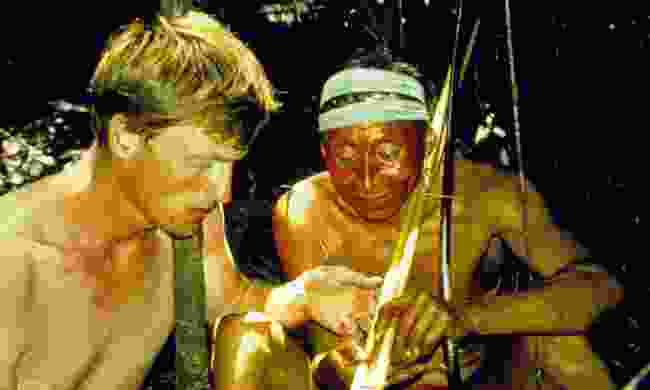 Benedict in the jungle (Benedict Allen)

“...the more open you are to a place, the better. If you're really trying to explore somewhere, you have to be open.”

I guess TV plays a role in inspiring people to do just that, but it does also simplify things.

Some say TV programmes perpetuate myths because television has a need for ratings and drama, and that people are portrayed as more exciting than they are. But there has been a strand of this throughout exploration going back to Christopher Columbus; people have exaggerated their findings going all the way back to Eldorado.

How do you avoid doing just that as a travel presenter?

I think it's very hard. For me there was a wonderful window when it was enough to just do a genuine journey and record it as it happened. Now you have to have a camera crew, health and safety rules and someone who's gone ahead to check it's safe for the 'explorer' to go there. How can you prevent it? Well, what I did originally was travelling with little technology. I was the only person doing it 20 years ago. No one had ever experienced a journey not knowing is the presenter would live or die or not. But now, certainly, it wouldn't be commissioned.

How did you get your start?

My dad was a test pilot, so I was probably a bit like him, wanting to push myself. Seeing him fly a Vulcan bomber over the back garden and looking up, I thought it was possible to be something a little bit different. I struggled for money, though, and didn't want to ride on the backs of locals through sponsorship. But I saw that local people didn't have any cash either, and thought that if I could live with, say, the people in the Orinoco Delta, then I could learn from them the skills to carry on. It became my philosophy and, perhaps, a more valid way of exploring. For these people, the forest, desert or Arctic is their home; it gives shelter, medicine and food, and if I could learn from them, I'm exploring on their terms. 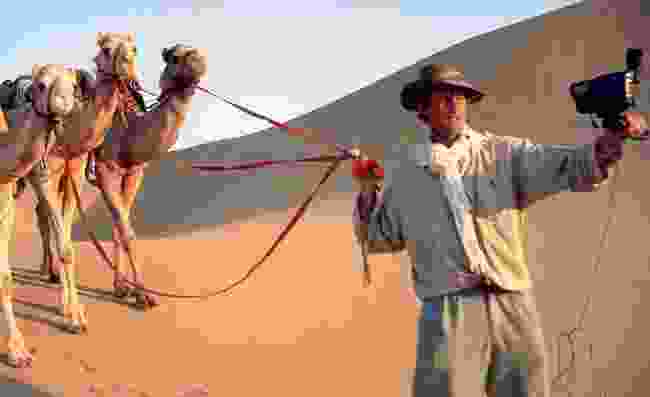 Benedict in the desert (Benedict Allen)

Was this how you first arrived in Papua New Guinea (PNG)?

Yes, it was at the beginning, when staying with locals changed from financial solution to a philosophy. I lived with a family on the Sepik River and underwent the brutal initiation ceremony to become a man – a crocodile as they call it.

Did you know about the rites?

It was a secret ceremony – in those days especially. I knew about the scarring [participants have their flesh cut to resemble crocodile skin in order to take on the strength of a crocodile], but no one knew about the beatings. I was beaten four or five times a day for six weeks. I was only 24 and eager to give everything a go, and I was grateful they let me take part in something central to their beliefs.

You must know PNG well...

It's so big. You can spot birds of paradise in the highlands; canoe the Sepik River, seeing its riverine wildlife and the cults that emulate it; and even walk the Kokoda Trail, the line of retreat taken by the Australians during the Pacific War. It has 850 languages and terrain that varies from swamps to cloud forests and jade seas. 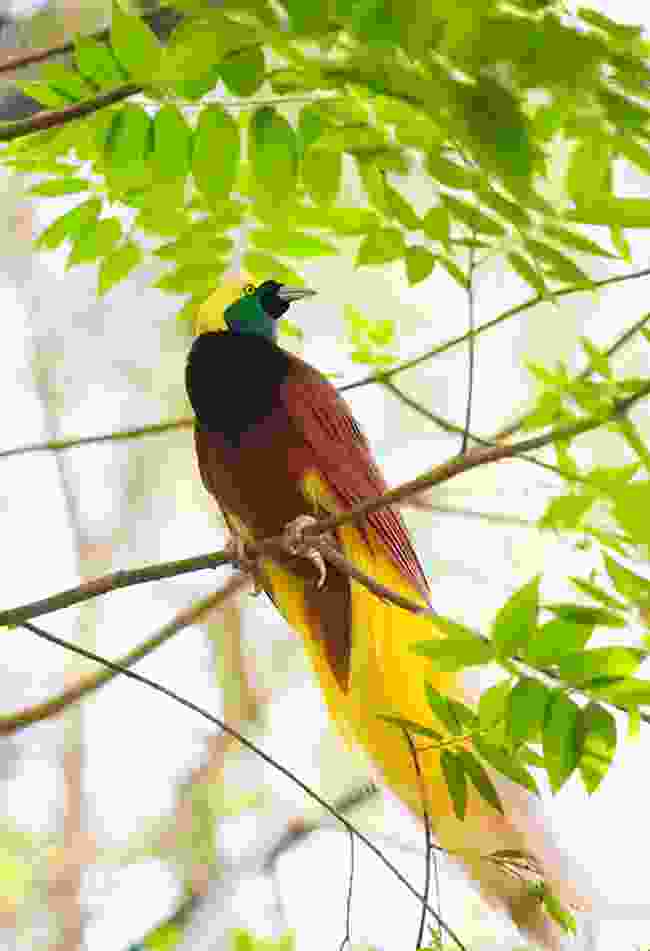 “You can spot birds of paradise in the highlands; canoe the Sepik River, seeing its riverine wildlife and the cults that emulate it.”

Do you revisit your old haunts?

After the ceremony, I went back time and again. But it was hard, mentally. Both there and back home, I was an oddity. But that's what I'm doing now: seeing how these places have changed and thanking those who helped me. I went last year to PNG to see the Yaifo people, who were wonderful to me as a young man, taking me over the Central Range. I was amazed to find their forest and culture was mostly intact. Last year was the worst for global deforestation – football pitch-sized areas were cleared every second – so I was buoyed by that, despite getting malaria, dengue fever and having to be extracted.

Yes, I recall it made the news.

Coming out of the forest I ran into a war between two ethnic groups. I made it to a missionary station but my radio had been smashed up. By the end I was incredibly ill and needed extracting – I had malaria and dengue fever, and you can't do anything about that. By the time the press came – both the Daily Mail and the Mail on Sunday showed up – I did need rescuing. Still, it does fascinate me that when it goes wrong, it is always the outside world, not the people I trust – the locals – who upset things.

What do you mean by 'the outside world'?

Well, I was once shot at by Pablo Escobar's gang. I was paddling my canoe on the Putamayo in Colombia and Escobar had moved there – it was about six months before he was killed and he was hiding out. I paddled right past his camp and he sent two people to kill me. I didn't stop to ask why, but I suppose he thought I was from the DEA. People chased me and kept shooting, but I turned the corner, jumped into the forest and got away.

Even on my first expedition I was chased by goldminers with knives, who either thought I'd stolen some gold or were worried about being reported. They chased me and my canoe capsized. I had to walk out of the forest. It became a very sad trek out of the forest – I had malaria and I was starving to death. But it's always outsiders that upset things. 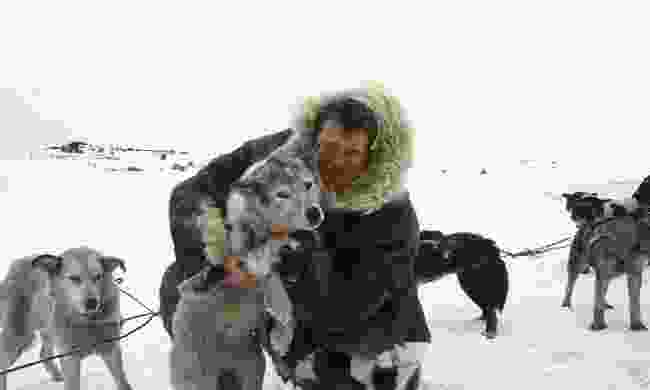 Benedict with a pack of huskies (Benedict Allen)

Unlike in your earlier days, you're a family man now. Has that affected the way you travel?

It's become less enjoyable to go. I do feel guilty about being away because my children need me as well. At the moment, my missions are very short – about six weeks long. I can't take the risks I used to take because I've got to make it back somehow. As a young man I thought I was immortal, and now I'm very much aware that I'm not. And it's harder for me now, physically. I'm more likely to have accidents because I don't have the physical strength to get out of trouble. As a parent, and some 35 years older, I have more perspective now.

But you still don't really bring any back-up.

I didn't take back-up because I wanted to see my guides as friends – to say I trust you with my life; I'm no more likely to be rescued than you are. That, weirdly, has become very relevant – and people still say I'm a throwback. But it's becoming more and more important to disconnect, and maybe that's the role of the explorer in the modern age: people learning to disconnect again. The explorer of the future will be those people who are prepared to step aside from their culture and take a different view.

When it goes wrong, do you feel you have to justify what you do?

It goes back to the first question. The golden days of exploration are ahead because the world has never needed more investigation, more interpretation, more solutions than now. We're facing huge habitat loss, extinction and global warming. All of this needs to be sorted out by explorers. And since it's a more democratic age, we're all involved now.