West Indonesia: Bali and beyond

But with this many islands and so much diversity, Indonesia’s enormity can be overwhelming for travellers. It’s a case of deciding where to start, and the western islands – Sumatra, Java, Bali and on to Flores – offer a richly varied, traveller-friendly introduction. 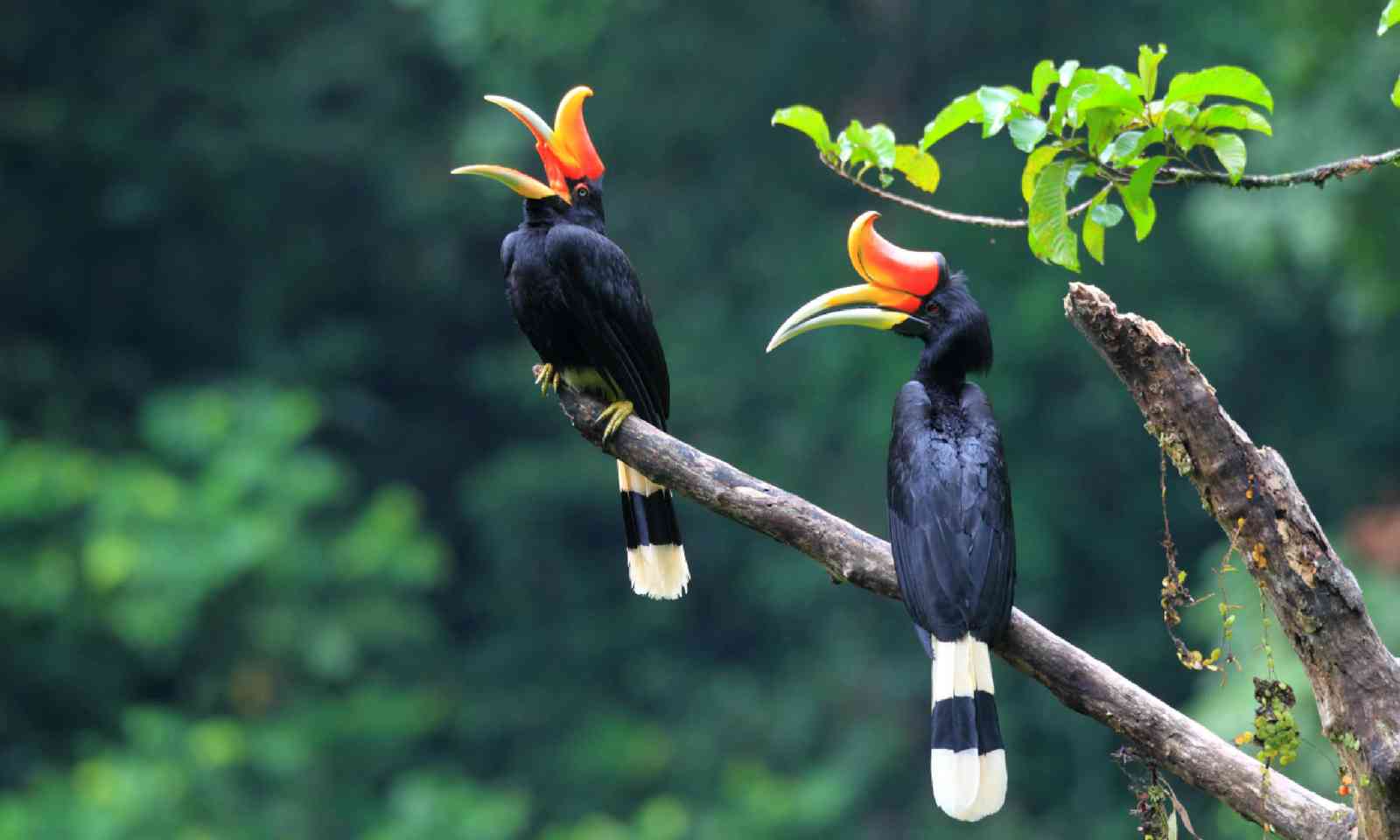 This is one of the planet’s most volcanic corners, with around 150 active cones. When Sumatra’s Toba volcano erupted 70,000 years ago it almost wiped out the human race; in 1815 the ash cloud from Tambora caused the ‘year without a summer’ (and all those dramatic sunsets for Turner’s paintbrush). Seismic friction also provokes regular disasters, including the devastating tsunami of 2004.

But these cataclysmic forces of nature are a blessing as well as a curse. Volcanic soil is rich in minerals; Java, Bali and Sumatra are incredibly fecund, able to sustain two or three rice crops a year, plus a smorgasbord of tropical exotica. Rural Indonesia is impossibly green, with tiers of verdant rice paddies, hills blanketed in tea plantations and biologically rich rainforests. 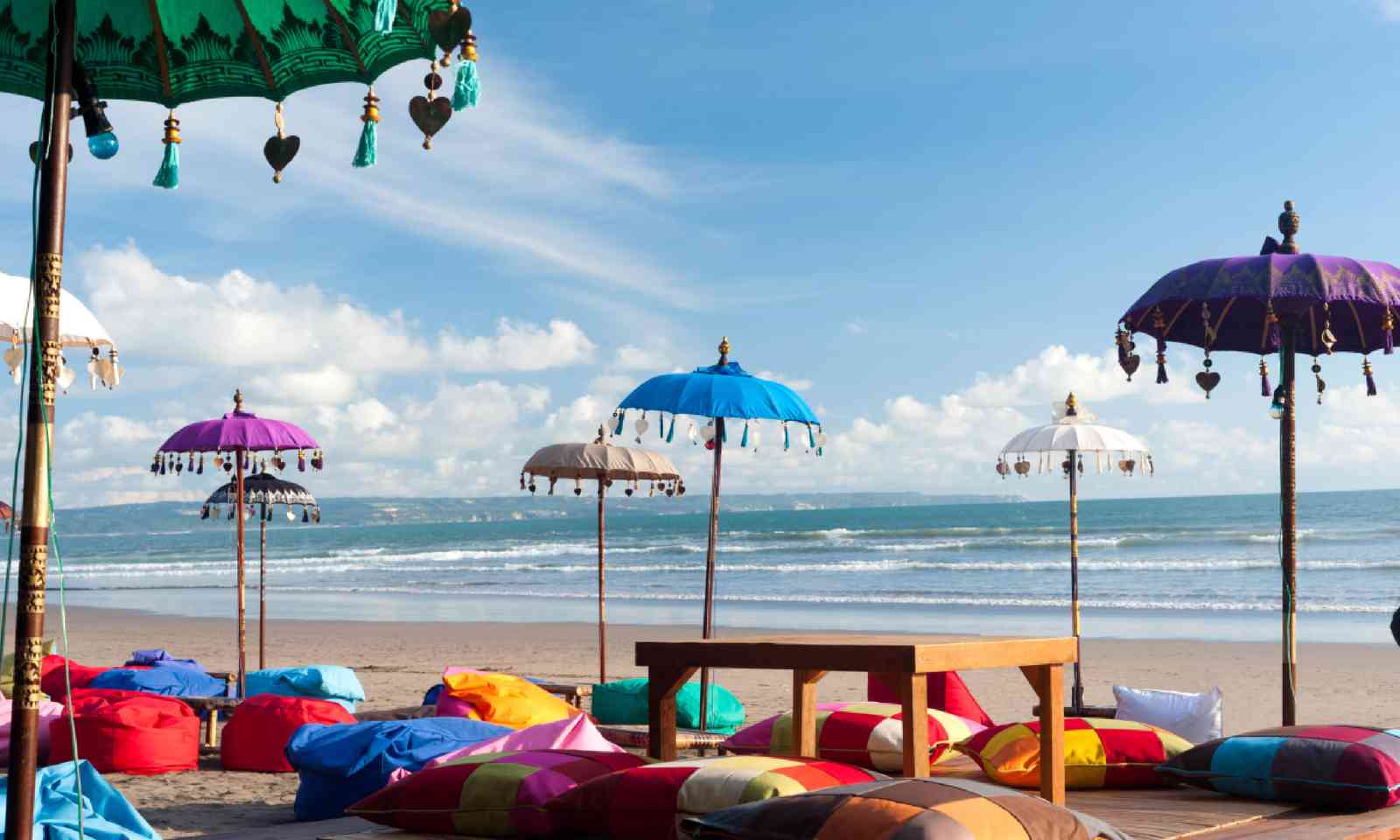 Indonesia is great value, and a part of South-East Asia where exploring can still feel like an adventure. Bali is the one corner of the country where tourism is really evident – and even here it’s easy to escape the crowds.

Elsewhere, you can take a pick ’n’ mix approach to your travels. Try Sumatra’s rainforests, orang-utans and Dutch colonial towns; Java’s historic monuments and bewitching landscapes; Bali and Lombok’s diving and surf; or Nusa Tenggara’s volcanic crater lakes, Komodo dragons and tribal culture. You pays (not much) money, and you takes your choice.

Bali is Indonesia’s only Hindu-majority island; Balinese daily rituals, ceremonies and offerings give the place a unique feel. Lush, green and incredibly fertile, Bali offers a delectable experience of the tropics.

Southern Bali is heavily developed, centred on the tacky resort of Kuta. But just along the coast, Seminyak is replete with stylish restaurants and bars, boutiques, cool clubs and a glorious oceanic sandy beach. Uluwatu, a Hindu temple perched on cliffs overlooking the sea near the island’s southernmost tip, is spectacular – get here at sunset to witness the awesome Kecak dance. 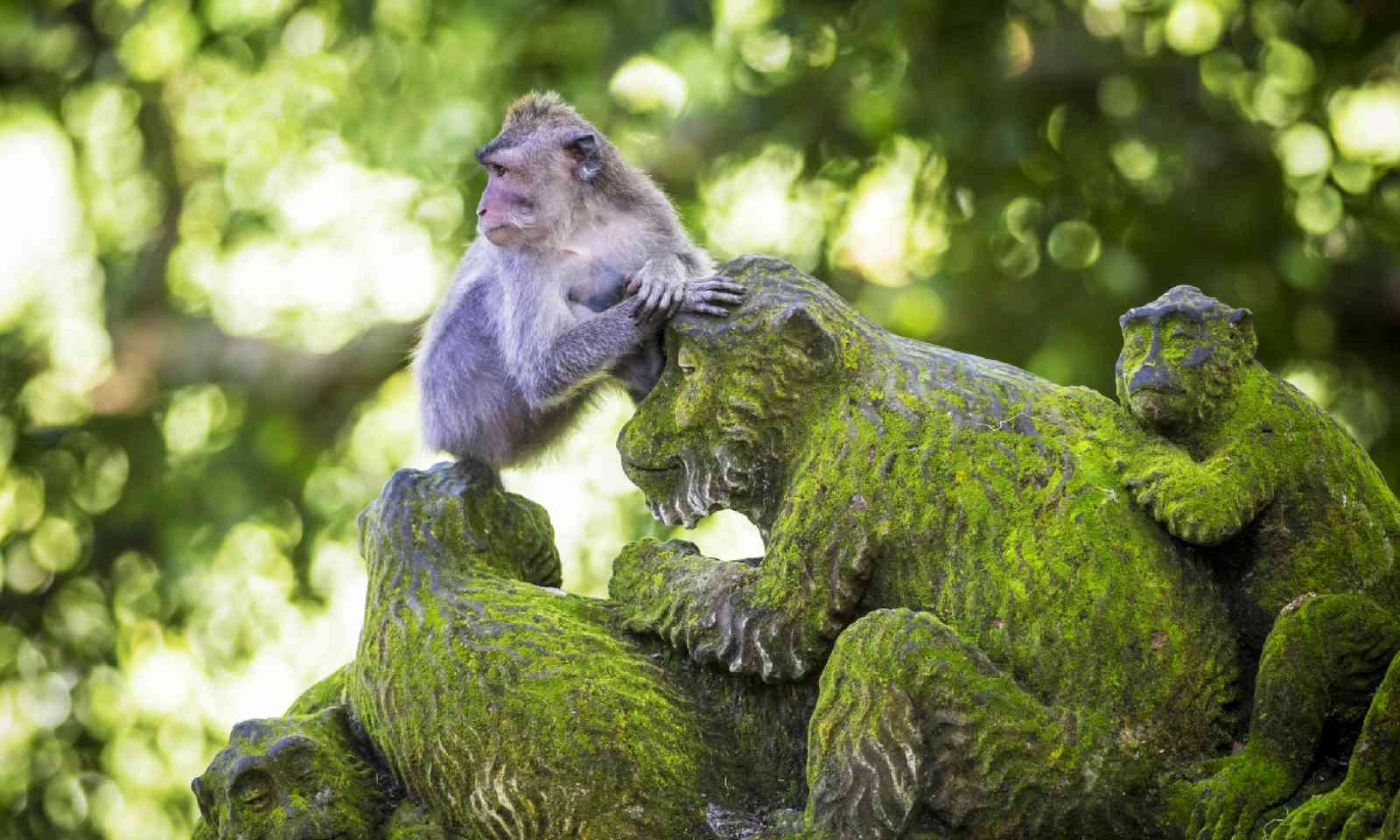 Bali’s spiritual heart is Ubud, an overgrown village of art galleries and museums, dance performances, a great local market and some amazing hotels. From here you can access the active mini-volcano of Batur or sacred Agung itself (the island’s highest peak at 3,142m), then head up to Lovina on the north coast, a low-key beach centre with family-owned homestays and a coastline of sheltered dark sands.

Track back east to Padangbai, from where fast boats connect Bali to the Gili Islands. These idyllic islets have transformed from backpacker budget to boutique chic in no time. Their appeal is unchanged, though: white sands, turquoise sea, coral reefs and no motorised transport to disturb the peace. They’re prime scuba and snorkelling territory, with a clutch of professional dive schools and seas bustling with turtles. Get here quick before hip hotels totally replace bamboo huts. 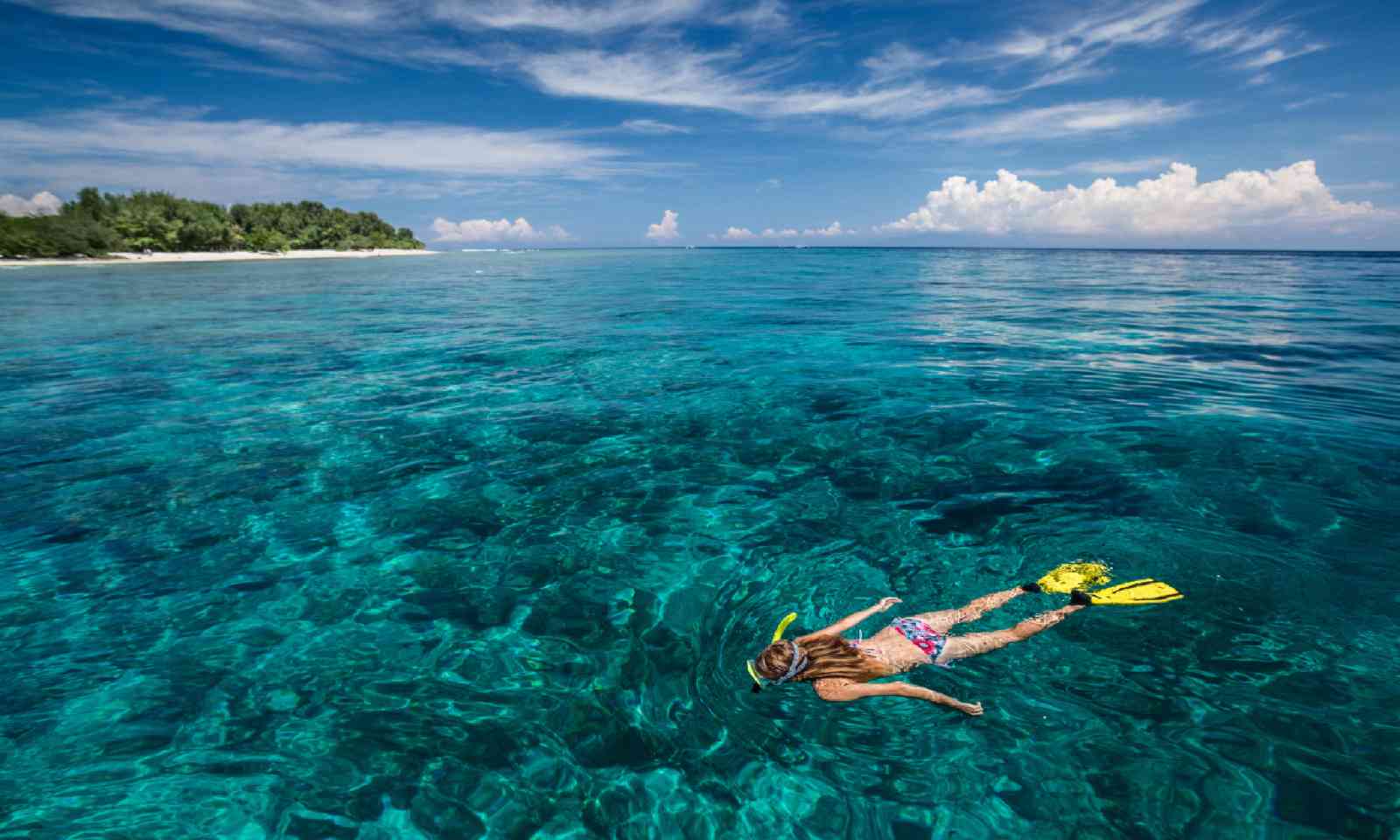 Snorkelling in the Gili Islands (Shutterstock)

On neighbouring Lombok, mighty Rinjani volcano – its jagged 3,726m profile looming over the north of the island – is sacred to both Hindus and mystic Muslims. Rinjani offers the region’s premier trek, scaling the sides of a giant cone to the lip of a great caldera, then hiking into the crater itself past the smoking mini-cone of Gunung Baru to a sacred lake. Pilgrims from as far away as Java journey here to make offerings at this spellbinding place.

Lombok’s unspoilt southern coastline consists of a dozen or so magnificent bays pounded by the Indian Ocean. This is prime surfing terrain, though there are also a couple of good swimming beaches, including idyllic Mawan, with clear blue seas and a crescent of fine sand.

East of Lombok the Indonesian chain loops towards Australia’s Top End. This remote, diverse region, known as Nusa Tenggara, is peopled by Muslims (both strictly orthodox and resolutely mystic), Catholics, Protestants, tribal groups and a smattering of Chinese and Hindus.

Gateway to these islands is Flores, a rugged island peppered with yet more active volcanoes, tribal villages and one truly exceptional site. Kelimutu is an extraordinary volcano with three crater lakes of wildly different hues, presently ink-black, chocolate brown and jade green, though their colours change according to shifting mineral content; flights from Bali serve Maumere, a couple of hours by road from Kelimutu.

To the west, the hill town of Bajawa makes an ideal break along the cross-island highway; the surrounding hills are dotted with Ngada tribal villages – Bena has a wonderful collection of thatched houses and megalithic tombs – and gorgeous hot springs.

Continuing west via Ruteng (good hiking trails) you hit the coast at Labuanbajo. This little port has a scruffy allure, with a high street dotted with losmen (guesthouses) and dive schools, and some exquisite offshore islands: Kanawa and Serayu have simple bungalows if you want to play Robinson Crusoe. 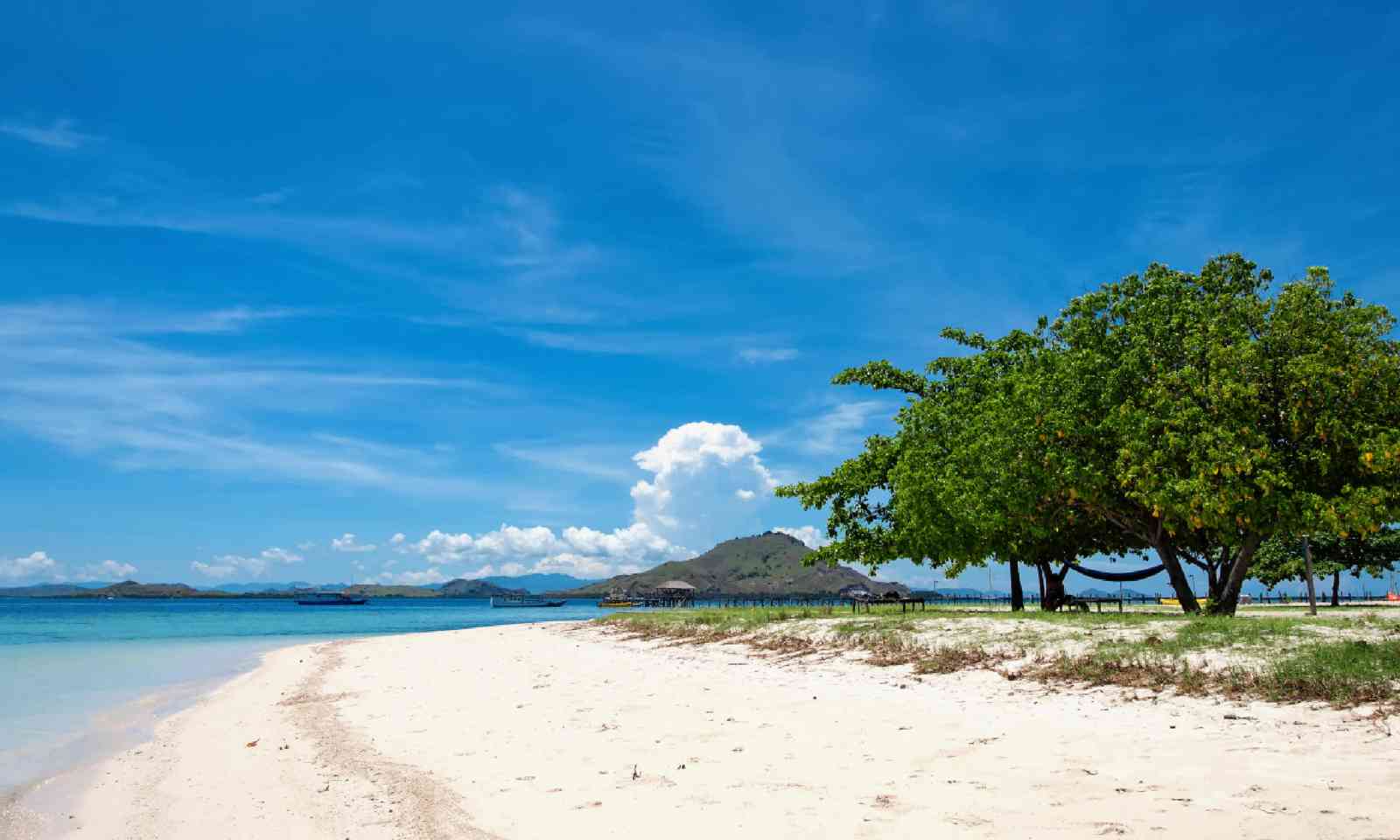 Labuanbajo is also the place to set up a dragon trip. These days most boats leave for Rinca, closest to Flores, rather than Komodo island itself. About 1,000 ora lizards inhabit both islands. The whole dragon-hunting experience is delightfully (or concerningly) casual, with just a ranger and a stick between you and the dragons; you’re sure to see several.

It doesn’t sound that enticing: one of the most densely populated places on earth, Java is home to around 130 million people. Yet megacities are only part of the picture, and a decent transport network means Indonesia’s hub island is pretty easy to explore.

Begin in Jakarta: hit the National Museum, then get out quick – the capital is polluted and traffic-choked. Head for Bogor, home to one of the world’s greatest gardens, established by Sir Stanford Raffles when the British briefly controlled Java, with its amazing palms and orchids. 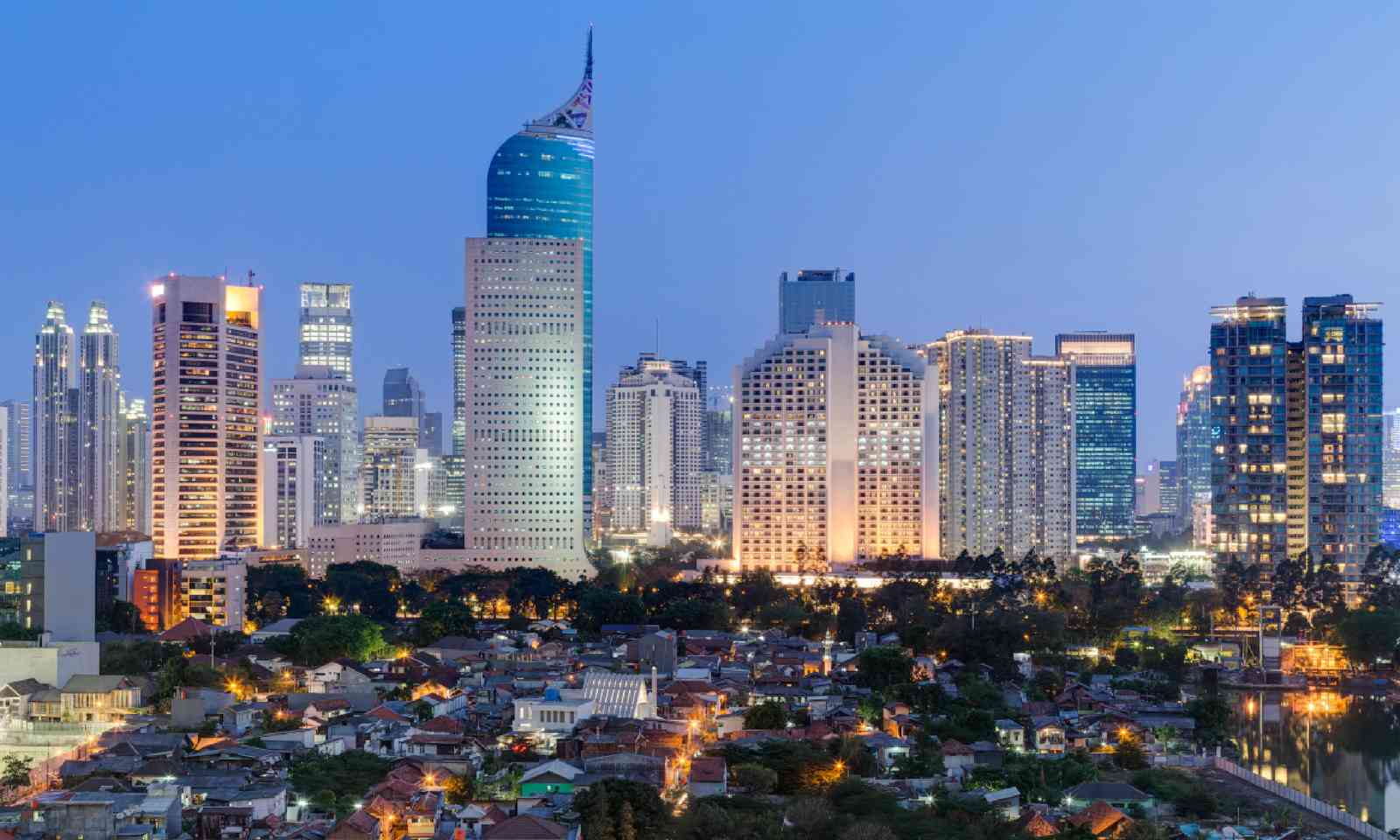 To the east, sleepy Cianjur hosts an excellent homestay programme run by fluent English speakers, allowing you to get to grips with the complexities of Javanese life via visits to schools, farms and everyday conversation.

On Java’s south coast, Pangandaran sits at the centre of swathes of tropical beaches. This is prime surf country: a great place to learn to ride waves by day and feast on seafood after dark. Visit the national park south of town, thronging with fruit bats, and nearby Green Canyon for waterfall showers.

Heading east, Yogyakarta is the heartland of Javanese culture, a city with a strong artistic heritage – it’s the place to enjoy traditional dances, wayang shadow puppet shows, fine museums, royal palaces and art galleries galore. Nearby Borobudur is breathtaking, a Buddhist monument encompassing hundreds of stupas and magnificent reliefs. Prambanan, on the other side of the city, is a cluster of Hindu temples soaring to 47m, decorated with carved stone depictions of gods Shiva and Vishnu. 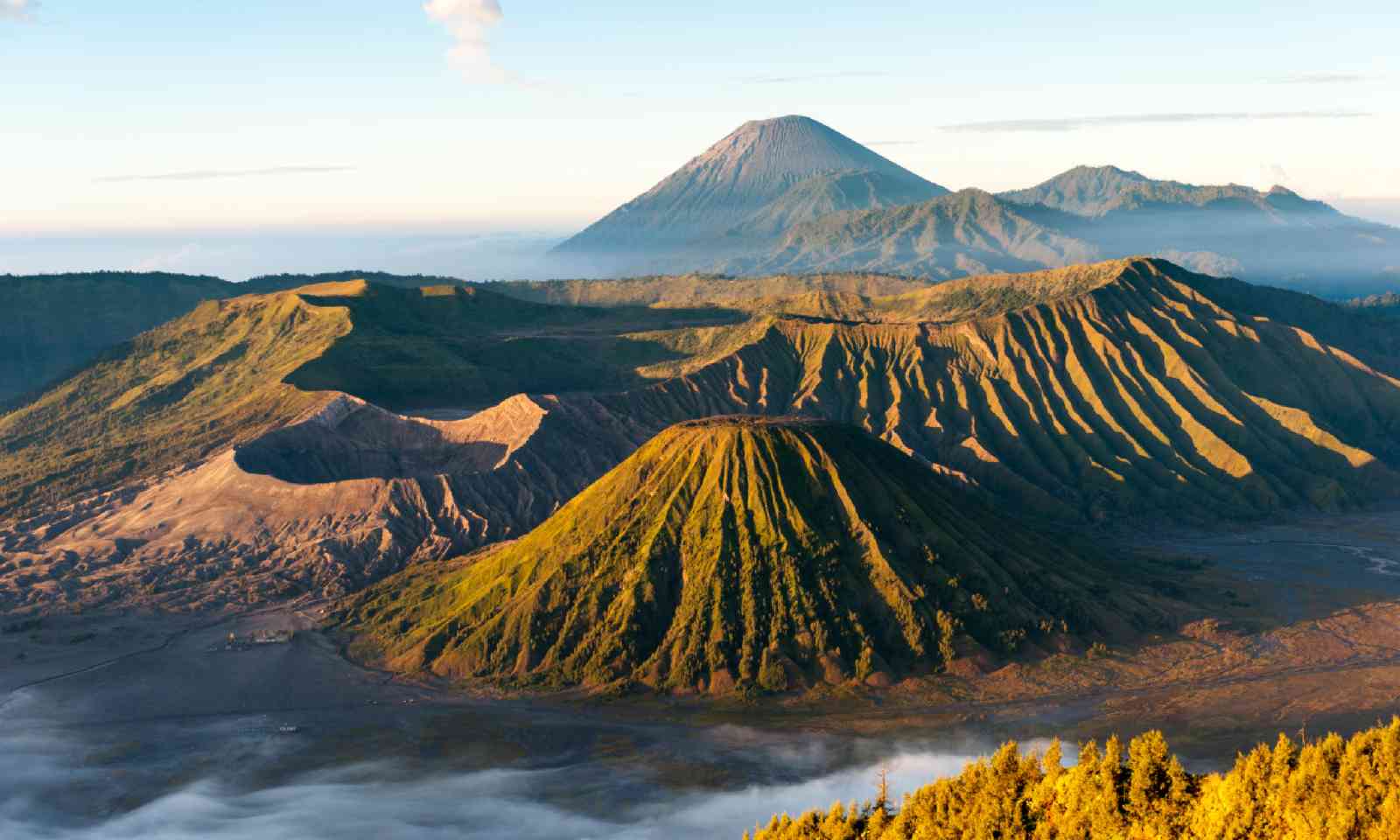 Eastern Java is less populated, drier and wilder. Bromo’s huge volcanic caldera is the big draw. Climb the viewpoint for the best perspective: the belching cone of Semeru (3,676m) sits on the horizon and lava flows are exposed before you.

The final stop is Ijen, another volcano; this one is worked by sulphur miners, who hack out great chunks and lug them back down the cone. It’s quite a scene, with smoke and steam billowing around the edge of the crater, a window on the earth’s core.

Sumatra is vast. The world’s sixth-largest island (it’s over twice the size of Britain) stretches nearly 2,000km from north to south. A chain of volcanoes forms a jagged spine along its western flank, soaring to a height of 3,800m.

Sumatra has rainforest and wildlife (including 600 bird species, elephant, rhino and orang-utan), highland scenery, epic surf and some lingering Dutch colonial character. Though deforestation is a huge problem there’s still magnificent jungle to explore. Most of Sumatra’s most enticing sights are concentrated in the north-west.

The island’s main city, Medan, is the gateway for Bukit Lawang, home to an orang-utan rehabilitation centre. Several thousand of the ginger apes swing through the nearby forest; you’re sure to encounter them at the feeding station, or on a jungle hike into neighbouring Gunung Leuser NP.

In nearby Tangkahan Forest Reserve you can spot monkeys and birdlife, and go tubing in a pristine river. Trips north to Aceh province, which is recovering well after the 2004 tsunami, are an option from here.

Berastagi, an old Dutch hill station, is the launching point for tours of traditional Karo Batak villages, and for tackling the highly active Gunung Sibayak volcano. To the south shimmers Lake Toba, the world’s largest volcanic lake and a sublime place to relax surrounded by mountains. The Batak locals are Christians, so tucking into spit-roasted suckling pig and Bintang beer while catching some live music (they’re a tuneful bunch) is on the agenda.

You’ll cross the equator (where buses always stop for photos) en route to Bukittinggi, a pretty market town with a temperate climate and a crop of Padang restaurants serving the spiciest, most chilli-saturated food in Indonesia. Bukittinggi is also the base for ecotourism adventures to Minangkabau villages (their houses look like upturned boats), nature reserves and the delightful crater lake of Maninjau.