Land of the gods: Trekking on Baffin Island, Canada

Discover an island where the formidable Mount Thor looms large – the pinnacle of one of Canada's greatest, yet gruelling, hiking routes. Lisa Young faces up to the challenge...

Who could resist the lure of a mountain called Thor? Not me. Just its name – the Norse god of thunder – gives a hint of this wild, formidable peak. Its sheer 1,250-metre face is the tallest vertical cliff in the world, leering over the desolate Baffin Island landscape with a massive natural overhang. In photographs it looks awesome, terrifying – just like its namesake.

Trekking on Baffin Island, in the outer reaches of Canada, is certainly no walk in the park. Its mountains are named after Norse gods and realms: as well as Thor, here you’ll find Asgard (one of the Nine Worlds of Norse mythology) and Odin (Asgard’s wise but brutal king).

It’s a desolate land, yes, but also rich in poignant beauty. I feel an affinity with Arctic Canada and have visited often; when you go, you know you are one of a handful of the world’s population to have ever stepped foot there. But Mount Thor – and its fearsome neighbours – had eluded me yet.

The Auyuittuq Getaway Hike – a 9-day, 70-km journey up a glacial valley on Baffin Island – offered the opportunity to change that.

The Akshayuk Pass is a 97-km, ice-free trough that cuts through the mountains between Cumberland Sound and the Davis Strait. It was once filled by glaciers that cut out the valley’s deep U-shape.

I decided to tackle it in a group expedition: no previous backpacking experience was required, but reasonable fitness was essential. We were a group of five, aged from 40 to 75: two Brits and three Canadians. Reaching Mount Thor had long been a dream for us all. 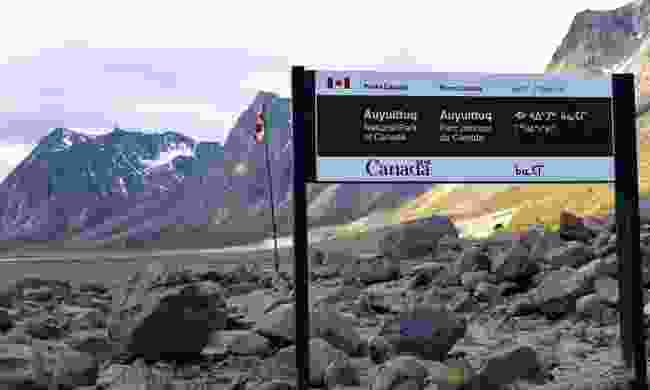 A bottle of bear spray

My journey started in London and involved four flights – to Toronto, to Ottawa, to Iqaluit, in Nunavut territory, and, finally, in a flight-delaying gale, to the remote hamlet of Pangnirtung, a small Inuit community of around 1,350 inhabitants on the outskirts of Auyuittuq National Park. Small, brightly painted houses have replaced a nomadic lifestyle.

There, we registered with Parks Canada and had an orientation session. We also did the necessary repacking. Most of the stuff we had brought came out of our backpacks to make room for food, tents, sleeping bags, cooking utensils, fuel for the stove – and bear spray! We had been told we were unlikely to see bears, but, nevertheless, we were heading out of our comfort zone and into theirs.

Including minimal personal gear, each backpack weighed around 28kg. I could barely lift my bag, and my camera gear added to the burden.

To get to the head of the trek, we loaded our packs onto a small boat, which transported us 31 km to the end of a fjord and the mouth of the fast-flowing and very cold Weasel River.

We had to throw our packs from the boat onto the boulder-strewn shore and then scrabble after them, before clambering over about 2km of rocks to a camping spot called Overlord, where we spent the first night. 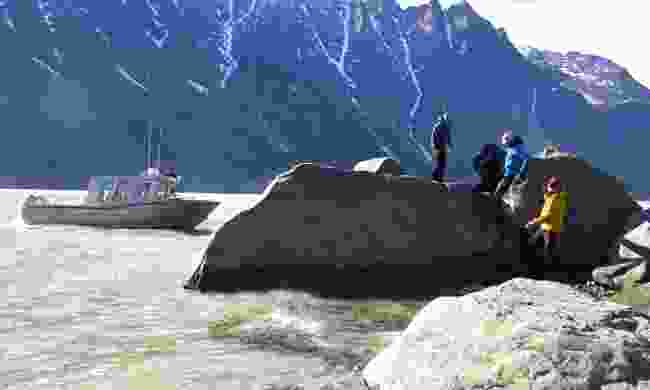 The start of the trek to Mount Thor (Lisa Young)

Adventures in the midnight sun

The first few days were spent hiking up towards the top of the Weasel River Valley – a very gentle incline. Above the tree line, where nothing much grows, it was immensely peaceful. The scenery was immense, with glacier tongues tumbling over the tops of mountains, and a carpet of spring flowers.

It was August, with 24-hour daylight, and daytime temperatures averaging around 12°C, with night-time lows of perhaps 4°C. Nonetheless, it can snow at any time of the year – so it was reassuring to note the route’s emergency shelters, which are equipped with radios.

There was little wildlife – just a few Canadian geese, the odd Arctic fox and sometimes a hare hopping across our path. We stream-hopped across the rock-strewn terrain, beneath vast mountains, with the milky-coloured Weasel River flowing rapidly by. It was easy to feel swallowed up in the landscape, insignificant in the scheme of things.

Throughout the adventure, food was cooked on an outback stove – the likes of spaghetti with dried meat and a sauce, or rice and tortillas. We drank from streams of fresh, glacial water, cold to the touch, but sweet and pure. 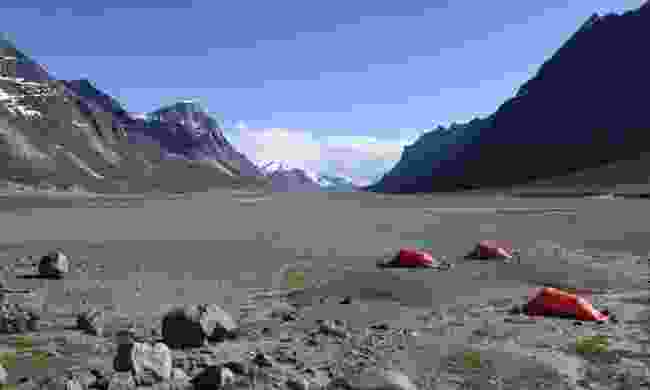 Tents set up for the second night, with views looking down the valley to where we started (Lisa Young)

The weather changed constantly – from blue sky and sunshine to whistling wind and tumbling snow – and the wind chill made things even colder.

We were told that polar bear incidents are actually incredibly rare. The real danger is the river crossings, where the flow can be strong enough to knock you over. Drownings are a much bigger concern than polar bears.

We passed landmarks with evocative names such as Crater Lake and Windy Lake. Our crossing into the Arctic Circle was marked by a traditional stone inuksuk (an Inuit reference marker).

At one point, we came across a gigantic landslide with boulders the size of houses. Up and over was the only way. We eventually cleared the slide, and, in the howling wind and cold rain, we looked for a place to camp. We were within sight of our goal: Mount Thor. 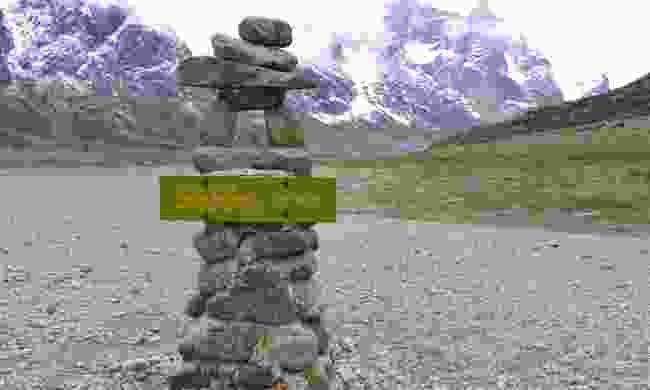 That night, we struggled to pitch our tents. They rose in the wind and were comically hard to pin down. I woke at around 2am because of the howling wind threatening to take our tent away, but there was something weighing it down, moving across the fabric outside. I nervously unzipped the tent, bear spray in hand, to find that a foot of snow had fallen and our tent was weighed down, chunks sliding off the fabric. There was no bear – just a small, fluffy lemming, watching me curiously.

The following morning, we woke early to a view of snow and cloud. Thor was completely hidden. Disappointment set in – we’d come so far to see this famous rock face, only for it to be concealed by fog.

But suddenly the snow stopped, and – miraculously – the sun came out. The huge snow-topped peak was resplendent in light so bright and clear that you could see every nook and cranny. Mount Odin (the park’s tallest peak) and Mount Asgard basked in the sunshine too.

The sight of its sheer cliff face inspired all sorts of emotions: it looked vast and magnificent, but also daunting and menacing. 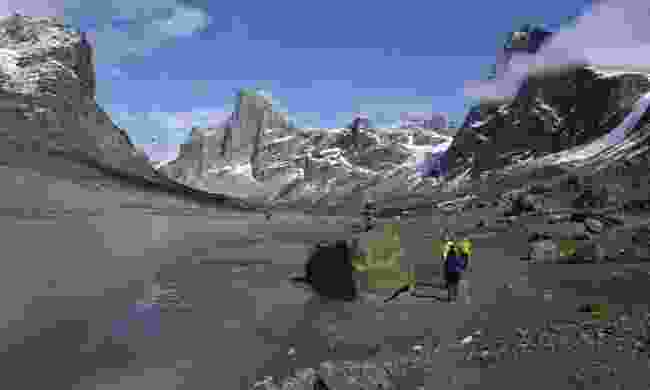 Geologists believe that around 1,500 years ago the valley was frozen over. The valley was most likely cut by ice flowing from the Laurentide Ice Sheet and that Mount Thor was cut in half by glacial erosion, giving it such a sheer face.

As we walked away, the window of good weather shut abruptly. Thor and his companions were gone.

The way back was less straightforward than the outward journey. It sounds simple to follow a valley up, then down again, but snow had started to fall again in earnest. We spent two nights snowed in at our next camp, North Sandcastle, sitting in our tents and holding them so they didn’t blow away. The weather chased us all the way back to South Sandcastle, where we’d camped on the second night.

On the last leg, we splashed our way across a maze of streams and rocky ground until the familiar boulders came into sight, telling us that we were close to the shore.

Finally, we reached the water, but it was low tide and hard for the boat to reach us, so we had to be ferried to it one by one in a small tin boat.

Although the trip took planning, determination and more than a few plane rides, it was definitely worth the effort. Who knows how long this place will stay pristine? Go now, while Thor is in full glory, unfettered by crowds – a truly unique Arctic experience. 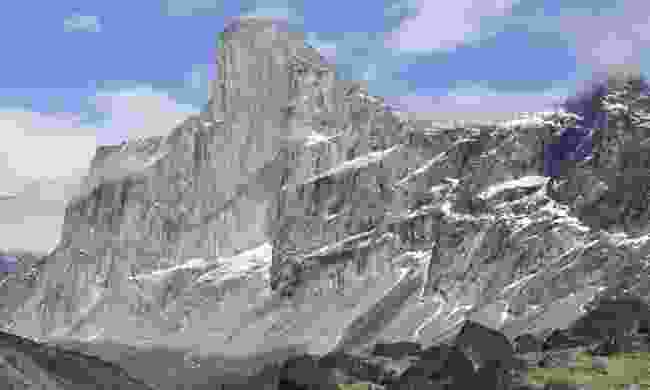 Mount Thor in all its glory (Lisa Young)

The author travelled with Black Feather, on the Auyuittuq Getaway Hike: 10 days camping and hiking, not including flights. Flights can be arranged by Black Feather, in partnership with Flight Centre.

Fly from the UK to Toronto with an overnight at Toronto Airport and an early flight the following day to Ottawa (1 hour). Take a connecting flight to Iqaluit (2.5 hours), and a final flight to Pangnirtung (1 hour).