A land full of dreams: Overcoming fear in Sarawak

Malaysia's biggest state is home to the Iban - the most feared of Borneo's headhunters. But with times changing, can travellers still find an authentic Iban experience among the traditional longhouses?

The old Iban shaman had seen a lot of magic in his 93 years. Behind us, in the slatted light of the longhouse's communal platform, a cluster of smoke-blackened heads hung sulkily from the rafters, as if in whispered conversation. I tried to reconcile the shrunken old man beside me with the once feared warrior who, even today, is famous throughout the region as the last of the headhunters.

Unding Anak Libau's life story was written indelibly in blue ink across his shrivelled body, which was almost entirely covered in interwoven tattoos. His shoulders were predictably marked with the bunga terung flower that commemorates the Iban initiation into manhood through travel. And as he told his story and that of his small community, a picture formed of a way of life that was hanging on by a thread.

Malaysian Borneo's indigenous Iban make up some 30% of the population of the state of Sarawak, where their reputation as fierce headhunters held right up until the 1960s. Those days are gone, but while some traditions fade, others have stuck fast, from their skill with crafts and textiles to the communal longhouses many still live in. 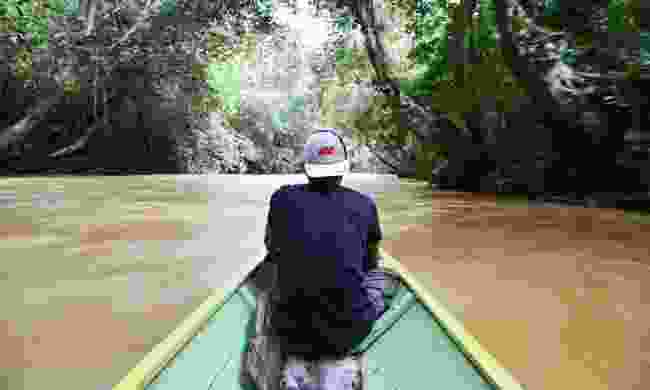 For travellers, these longhouses are a remarkable sight - essentially entire villages on stilts. On my first visit to Sarawak 20 years ago, they seemed the very heart of Iban life. Yet times are changing. I met Unding Anak Libau in the Serubah longhouse, 200km south-east of Kuching, near the main road. Ease of access to the city has brought benefits here in the form of running water and electricity - almost every bilik (family apartment) had a TV - but it also brings a nagging discontentment.

"The young have begun to follow very different dreams," Unding Anak Libau lamented. "Many have left to look for work in the city." Whereas life here was typical of the shifting world that the Iban face, my Kuching-based guide Eric Yap explained he could take me to a more traditional longhouse. But we would have to travel further into Sarawak's interior, along the big rivers that once served as the region's only transport network. The few authentic longhouses that survive these days do so because they have remained relatively inaccessible, yet the tiny number of travellers who make the effort to see them can witness a way of life not seen anywhere else - a disappearing world.

Four hours' drive after leaving Kuching (an hour beyond Serubah longhouse), we were on the banks of Lemanak River. As the motor longboat puttered out into the cappuccino-coloured current, Eric pointed out a diminutive crocodile basking on the bank, and through the occasional gaps in the emerald canopy I could see where the southern hills swept up towards the border with Kalimantan (Indonesian Borneo). It felt like we'd left the city far in our wake. 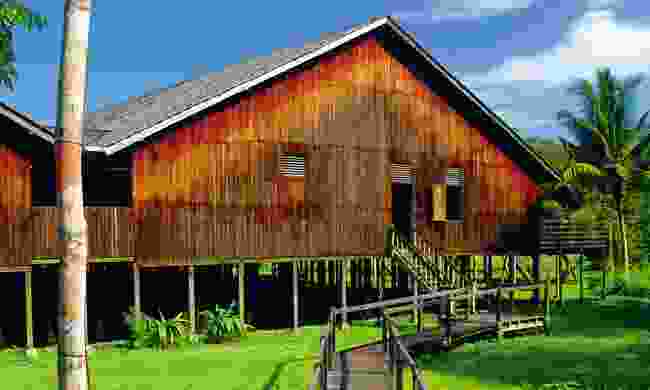 The walkway leading to a traditional Iban house (Mark Eveleigh)

On my first visit to the island I'd hitch-hiked across that border at the start of a six-week expedition into the heart of the great jungle. We became the first Westerners ever to explore the headwaters of the Mandai River, the sacred spirit world of the headhunters and a place where, even today, few Iban dare to travel. It became the start of a lifelong obsession with Borneo that had brought me back many times to the Indonesian side of the island. But this was the first time that I'd returned to Sarawak, and the going was mercifully easier.

Forty minutes after we'd clambered into the boat, we eased around a curve to catch our first sight of Ngemah Ulu, a timber longhouse raised on rickety stilts two metres above the jungle floor. We kicked off our shoes and climbed up to the flimsy bamboo outer platform, cluttered with tools, handwoven baskets and hunting dogs.

Explaining that most of the men were away at a funeral, Eric introduced me to the headman's wife, Sitie Anak Isang, who invited us into the ruai (the covered 'main street' of the longhouse). Eric began to unpack the small box of provisions we had brought to share around, and as my eyes adjusted to the shadowy light, I saw that several women were sitting together and weaving intricate bamboo sleeping mats. But these were straightforward, I was told, when compared with some of the patterns they used to make here.

"The women would dream the designs that they'd weave into the ceremonial cloth we call pua kumbu," Sitie Anak Isang explained. "The weaver would then ask the shaman if he thought her spirit was strong enough to withstand the powerful demons on the design." 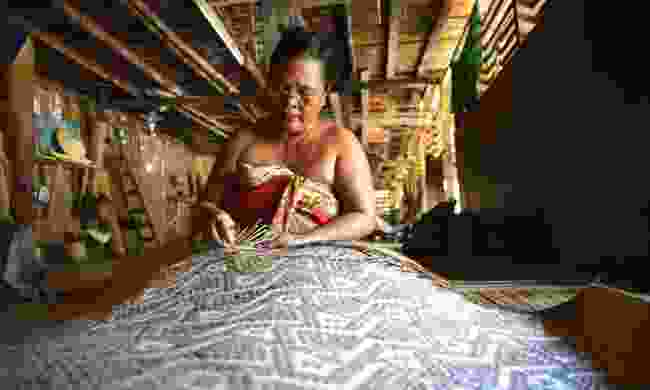 In the past, a truly great weaver would be tattooed on the hands with an insignia that identified her as the equal of even the most celebrated of the headhunters. When the head of an enemy was brought to the longhouse, it could only be received by one of these female spiritual warriors holding a pua kumbu. But times have changed - even here.

Things are more peaceful these days and, as the afternoon wore on, some of the men began to return from the other side of the valley, where they had been clearing land for new rice fields. Julius, the headman's son, had recently returned from the city. Like many of the men, his shoulders were proudly marked with the bunga terung flower.

A tattoo artist I'd met in Kuching, by the name of Boy Iban, had told me of a resurgence in traditional tattoos, as young Iban struggled to "remind themselves of where they had come from". Here, there were no such worries.

It was then that one of the men broke out the tuak (homemade rice wine) jug and, as the cloudy liquor began to make the rounds along the ruai, I was declared honorary waiter. Black magic is an ever-present threat in Borneo's traditional communities, and custom demanded that, as an outsider, I must take a small sip out of the glass before I presented it to each of the drinkers. Naturally, after a couple of rounds, Julius came out of the headman's private room carrying a two-metre-long hardwood blowpipe. I'd shot these many times before, but with the small sips of tuak mounting up, I was as astounded as anyone when, to raucous applause, my first two darts went straight through the bullseye and embedded themselves in the wall. 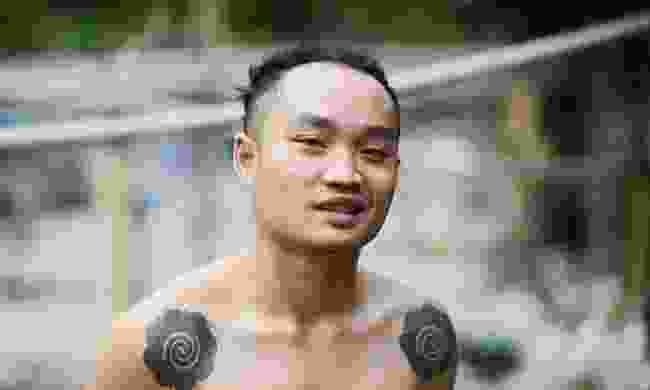 As the jungle night closed in, oil lamps began to flicker to life along the ruai and little groups collected here and there to sit and chat, just as the generations before them would have done. It struck me that such moments are vital to the harmony of a longhouse, and that it was the kind of bonding experience that could never survive in their modern equivalent, not over the white noise of Malaysian cable TV. I felt privileged, knowing few other visitors would experience this.

Finally, Eric's voice called out from the headman's apartment (always in the centre of the longhouse), yelling the Iban equivalent of "Come and geddit!". As is often the way with life in the longhouses, he'd made enough food so that friends, neighbours and family were able to join us to feast on barbecued pork (normally reserved for feast days), blanched fern tips and half a dozen specialities, including a chicken-foot soup that was more delicious than I could have imagined. With a fresh tuak jug we toasted in the traditional Iban way, with three long, loud shouts of "Ooooooh-hah!"

Happy laughter and boisterous chatter filtered up into the shadows where another bunch of skulls gazed down from among the timber beams, as if to remind us how life here has already changed. The reality is that very few travellers currently visit Ngemah Ulu, but community tourism might be the only way in which traditional longhouses like this can continue to retain a pride in the old ways, and in turn allow visitors a chance to experience a world under siege from the twin lures of city wealth and modern comforts.

There remains plenty of hope, though. By showing restless young Iban that outsiders have a genuine interest in their culture - and allowing them to supplement their income through tourism - visits like this can ensure their way of life survives into future generations. In the meantime, it's a chance for travellers to experience something truly unique. At the Ngemah Ulu longhouse I'd had a taste of real Iban life, one that I hope will be waiting for me in another 20 years. 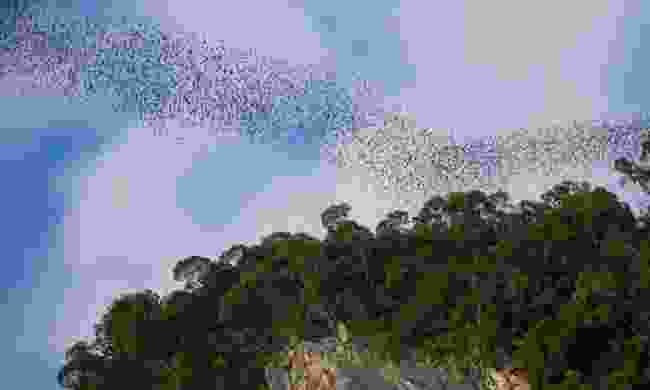 This was once the seat of the 'White Rajahs' - an English family granted the Kingdom of Sarawak in 1841 as reward for helping the Sultanate of Brunei. Today, a stroll along its riverbank in the evening is irresistibly romantic and a good chance to sample street food or visit its Indian Mosque (pictured). Kuching will also host the 21st Rainforest World Music Festival (rwmf.net) on 13-15 July 2018.

The park is home to the world's largest cave chamber - Sarawak Chamber is said to be big enough to park 40 Boeing 747s - while the millions of bats that live in Deer Cave are simply a natural wonder.

Not an immense cave by Sarawak standards, but a rich archaeological site with evidence of human occupation that stretches back some 40,000 years.

The oldest national park in Sarawak is also perhaps the best place in the region to see its amazing proboscis monkeys, with their large bulbous noses - known as 'Dutch monkeys' to the local population.

Semenggoh was established in 1975 as an animal orphanage and rehabilitation centre. It has become so successful that its forests have been repopulated to capacity with released orangutans, making it one of the best places in the world to photograph these wild apes.

Batang Ai is part of a 10,000 sq km trans-frontier sanctuary that stretches from Sarawak into Kalimantan. A dense orangutan population makes this a fine wildlife hot spot but it is also a birder's paradise, with eight hornbill species among countless other avian treasures. 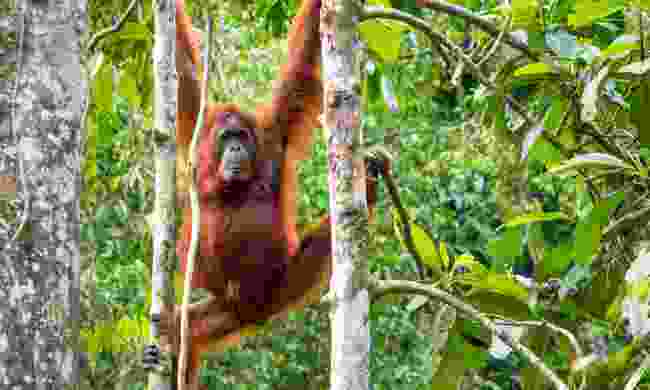 Sarawak (especially Kuching) boasts accommodation to suit any budget. Inexpensive backpacker hostels are available and it is often possible to negotiate for a night's accommodation in the longhouses if you have a smattering of Malay (or help from a guide).

Located at the foot of Mount Santubong, The Village House (Secret-collections.com/villagehouse), is a virtual museum for Sarawak's tribal art.

The stylish Batik Boutique Hotel (batikboutiquehotel.com) is perfectly situated near the river in Kuching; Backpacker's Stay (+60 82 422 566) is a budget hostel just a stone's throw from Kuching's waterfront bazaar.