Wild coastlines, a gritty past and wildlife-rich parks make northern Austrias an unforgettable region to explore – especially on two feet

When it comes to travelling, the phrase ‘see the real country’ is employed far too generously. But for the residents of the northern Spanish region of Asturias, it’s actually more a statement than superfluous travel inspiration. A Christian kingdom established seven centuries before Spain proper (718 AD), it was the only part of the country that resisted the Moorish invasion. And as the saying goes: ‘Asturias is Spain, the rest is reconquered territory.’

But with spectacular deep valleys, fascinating cities, a dramatic coastline interspersed with golden sandy slivers and a history that’s envied across Spain, they had much to fiercely protect. These days, the landscapes and culture of Asturias have remained untouched for centuries, ready to charm and awe the modern-day visitor…

Asturias’ natural drama isn’t just celebrated for being at the root of Spanish culture, but is lauded in its own right and was among the first to be officially recognised in the country. For it’s here, as well as straddling the regions of Cantabria and Castilla y León, that King Alfonso XIII established Spain’s (and the continent’s) first national park 100 years ago in 1918: Picos de Europa.

This wild corner sees nature’s paintbrush at its most creative: cloud-baiting sawtooth peaks cast shadows over forested gorges that vein the park like jade fissures. Rivers and lakes glisten in the sunshine below while wind-prodded wildflowers point the way for walkers treading the trails that weave the park.

Despite Asturias sharing Picos de Europa with its neighbours, its portion of the park is arguably the most attractive. Its minimal crowds are also a big plus, and it means you’re front row for wildlife-spotting. Asturias is reputed to be the last Western European refuge for the Cantabrian brown bear, but the sheer variety of fauna you can see here is just as impressive: chamois and Asturcón ponies are likely spots, and keep your eyes peeled for fire salamanders, crawling over the rocks like a tiny blaze of orange. Glance upwards and canny-eyed birdwatchers can spy golden eagles, griffon vultures and alpine choughs soaring above.

The Asturian section of Picos is significant for more historical reasons, too. At its centre sits Covadonga, reputedly the birthplace of the Christian resistance against the Moors. Today, it’s a popular pilgrimage site and visitors will find a small grotto housing a chapel, the burial site of leader Pelayo and a basilica carved in pink limestone.

But this ground-breaking park isn’t all the nature Asturias has to offer; more than a third of it is protected in one form or another and is rich with wonders. Somiedo National Park is one of seven UNESCO-listed biosphere reserves in the region and another stronghold for the brown bear, which loves slinking across the craggy ground and circling its string of lofty glacial lakes. Oscos-Eo is another, where thick oak woodland thrives in the fluvial basin of the Eo and wild boar, foxes and roe deer paw and hoof their way across the riverine forest.

For further natural highs, head for Las Ubiñas-La Mesa Natural Park and its Peña Ubiña massif, the second-largest limestone mountain chain in the Cantabrian range. Within, Huerta Cave is a magical collection of chambers home to several species of bat, while the beguiling karsts of Puertos de Marabio also thrill. To go truly off-grid, hire a guide and wander Muniellos Forest, the largest oak grove in Spain; you’ll nearly have it to yourself, with only 20 people a day permitted inside. These are merely a handful of Asturias’ impressive roll call of wild wonders; no surprise, then, that the area has been nicknamed the ‘natural paradise of Spain’.

This wealth of unspoilt land is a dream for any visitor to Asturias, but it’s an especially untamed playground for adrenalin-seekers looking to marry epic views with heartpumping thrills. A multitude of walking trails flow through its parks and natural areas and the varied vistas of Picos de Europa are an excellent starting point for any fitness level, with treads ranging from gentle meadow strolls to leg-burning rocky ascents.

A circular wander around Picos’ mirrorlike Covadonga lakes of Ercina and Enol is a fine introduction, and it’s also well worth taking the option of extending your walk up to the King’s Viewpoint, offering sights over untouched beech forest. The cliff-hugging Cares Gorge walk is a knee-knocking weave through deep limestone valleys while the route up to Ordiales Viewpoints passes majadas (summer pasture land with stone farmers’ cottages) and spectacular karsts.

With its sheer faces and craggy walls, Picos de Europa NP is rich pickings for climbers, too, and even the most inexperienced can scramble part of the way up the limestone tower of Picu Urriellu, Spain’s most iconic peak. Come winter, the Cantabrian range that sweeps this area becomes a snowy pleasure dome streaked in ski marks.

“Plenty of the region can be enjoyed with a shot of adrenalin.”

Those who prefer two wheels instead of two feet can also see the best of Asturias. The Bear’s Trail and the Turón Greenway both trace old mining routes, threading leafy gorges and bridge-hopping rivers exactly like the region’s 19th-century coal loaders used to. For those after something more challenging, the Montaña Central circuit zips past pre-Romanesque architecture, enchanting hamlets and wide-ranging verdant valley views. If you’re really hardcore, you can take on (or just admire) the stomach-churningly steep Alto del Angliru, a climb often used in the Vuelta a España road race.

The rich supply of rivers found in Asturias means water babies can get their thrills, too. The ripples of Navia, Nalón, Cares or Sella aren’t physically demanding, and are perfect for a leisurely paddle in a canoe or traditional pirogue. Pit-stopping along the way affords the chance to energetically embrace the landscape in other ways, such as canyoning in rocky crags or ravines, or simply relaxing in cooling pools like Olla de San Vicente along the River Dobra.

Whether surfing off Asturias’ pristine beaches or paragliding high above fine natural vistas, plenty of the region can be enjoyed with a shot of adrenalin.

Asturias isn’t all about the wilderness. Its trio of cities have their charms, too. The capital, Oviedo, combines an Old Town of prettily webbed backstreets with plazas and crumbling honey-coloured palaces, while a completely refurbished new district buzzes with café chatter and shops. Thanks to Asturias’ preserved Christian history, many of its ancient religious buildings still remain. Its stunning jewel is San Salvador Cathedral, first founded in 781 AD and now expertly fusing together myriad styles added across a millennium, including pre-Romanesque, Gothic and Baroque. It’s not alone, with San Tirso church and the pair of hilltop churches, Santa María del Naranco and San Miguel de Lillo, dating back to the Asturias reign. Behind the cathedral lies the Museum of Fine Art, doubly impressive for being housed in an eye-pleasing 17th-century palace, but also for its excellent haul of Asturian art. Scattered sections of the city’s old medieval walls encircles Oviedo’s old quarter, another reminder of the region’s incredibly long history.

Head north to the coast and the largest city in Asturias, Gijón. It’s had a remarkable transformation, softening its industrial reputation as the region’s biggest coal port and becoming a buzzing hub where lively locals populate its beaches and harbour. The Cimadevilla headland is home to the quieter fishing town that Gijón originally spilled out from. At its tip lies the Cerro Santa Catalina hill, topped by castle ruins and Eduardo Chillida’s concrete sculpture Elogio del Horizonte, which has become something of an icon in the city now. However, you can’t discount its lovely selection of beaches – the perfect place for sipping the city’s favourite tipple, cider.

The third city in Asturias, Avilés, has been similarly reborn. It’s managed to shake off its pollution woes to show off its remarkably beautiful historic centre. A knot of streets and plazas charm every visitor, with the central Plaza de España fronted by a pair of quaint 17th-century buildings. The city’s new symbol is the Niemeyer Centre, the only building by architect Oscar Niemeyer in Spain. But it’s early spring when Avilés comes alive, as its Mardi Gras-style carnival rolls into town, with locals donning costumes of varying artistic wonder and wackiness. 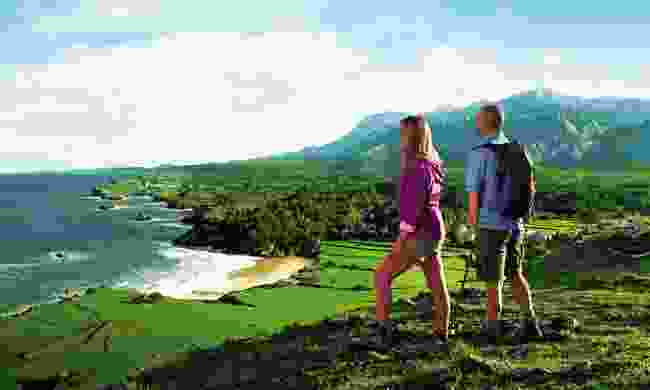 More than 200 beaches fringe the watery edges of Asturias but the diversity in its coastal offerings is astonishing, leading it to be dubbed the Costa Verde, or the ‘Green Coast’. At Playa de Cuevas del Mar, water laps impressive stone arches and sea caves pock the rocky cliffs, with the distant Asturian mountain range forging a fine backdrop. Peculiar rock formations carpeted in lush greenery surround you at Playa de Gulpiyuri, while Playa del Silencio does what it says on the tin, inviting you just to sit (or swim) and soak up this untarnished coastal swathe.

But the diversity found on its edges is true of the whole of Asturias, a land packed with compelling history, natural drama, wildlife and adventure. It’s the perfect blend for every traveller. You could say Asturias is where you see the real Spain but it’s much more than that – it has a heart and soul of its very own.