There are loads of lovely places to just flop on the sand – but where’s the fun in that? Here are the South-East Asian beaches that offer a bucket load of adventure

Bako is Sarawak’s best bits in microcosm – all the state’s seven vegetation types are found here, on a chunk of land brimming with wildlife and frilled by mangroves, rocky headlands and pristine beaches. It’s also criss-crossed by 30km of walking trails, enabling exciting hikes between deserted sands. 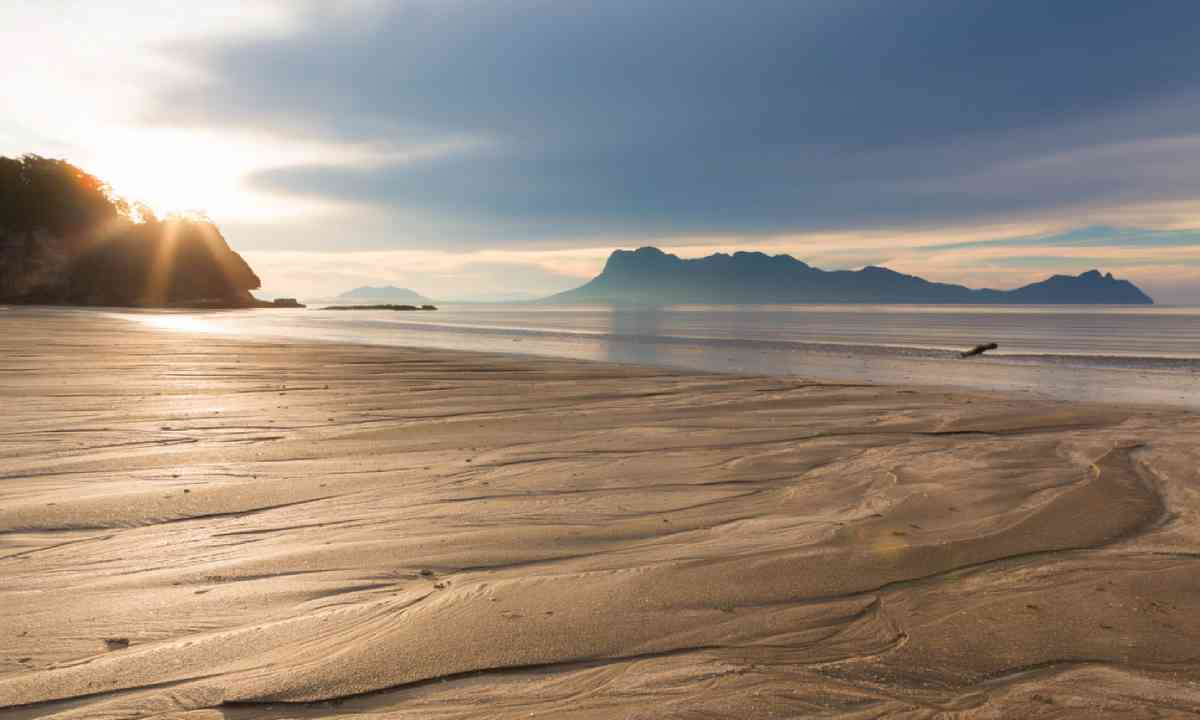 A 2.5km route from park HQ at Telok Assam (telok meaning ‘bay’) passes a riot of fan palms and pitcher plants to reach the cliffs above inaccessible – but beautiful – Telok Pandan Besar, before continuing over an exposed sandstone rock and through shady forest to reach sandy Telok Pandan Kecil.

Think part-romantic Chinese landscape, a smidgen of Halong Bay and a bit of James Bond and you have the bay of Ao Phang Nga, which takes up most of the National Marine Park of the same name. Encompassing some 400 sq km of towering karst, gnarled caves, blue waters and maze-like mangroves, the bay is best explored by kayak: paddling is really the only way to wend between the sunken tree roots, find cliff-backed crescents of sand and duck into hongs, secretive lagoons reached via tunnels eroded in the rock. 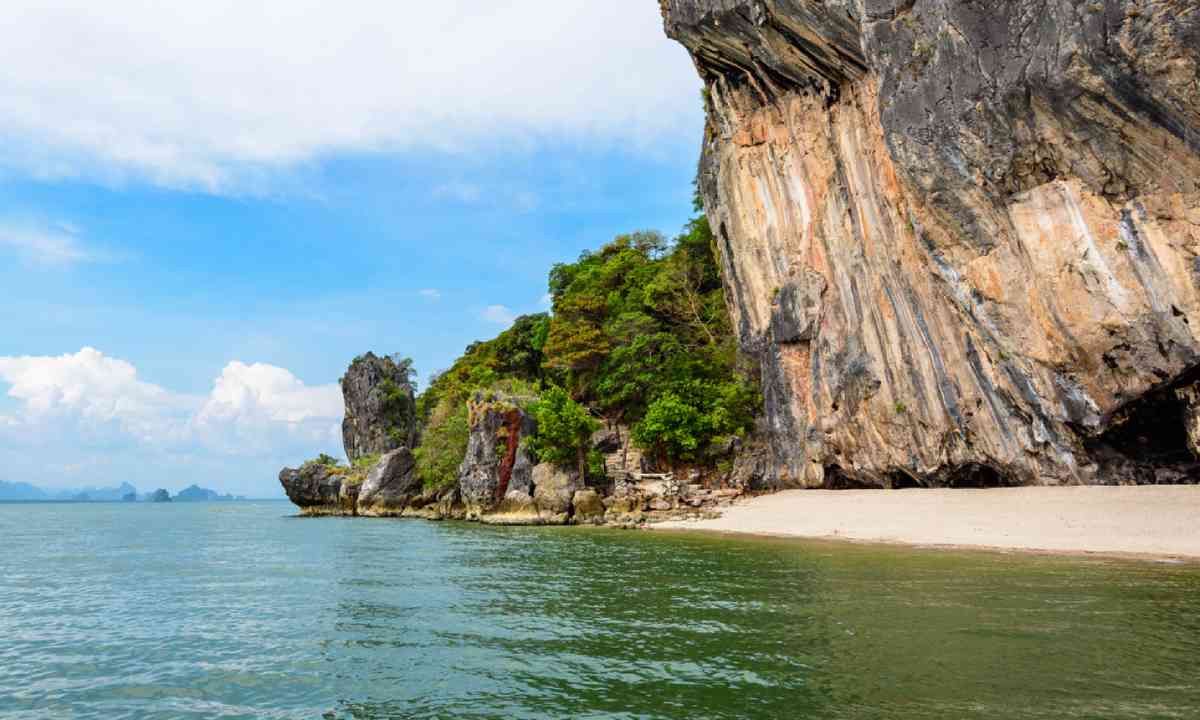 One of Ao Phang Nga’s islands was home to Scaramanga’s lair in The Man with the Golden Gun; unsurprisingly, this is one of the most touristy spots. Instead, stay on the quiet island of Koh Yao Yai, accessible by boat from Phuket and Krabi. The finest beaches here are Hat Lo Paa Raet, where the sand sparkles and coconut palms sway, and Hat Tiikut, backed by casuarina trees.

The beach: Hai Pai
Where to find it: Lan Ha Bay, Vietnam

Want to see some famed Vietnamese coastal karst landscapes? Well, Lan Ha is as lovely as UNESCO-listed Halong, but with fewer people. Technically, this bay on the east side of Cat Ba Island is the southern adjunct of more famous Halong, but fewer boats make it here, leaving Lan Ha’s inlets, 300-odd limestone outcrops, fish-rich reefs and spectacular beaches all the quieter. 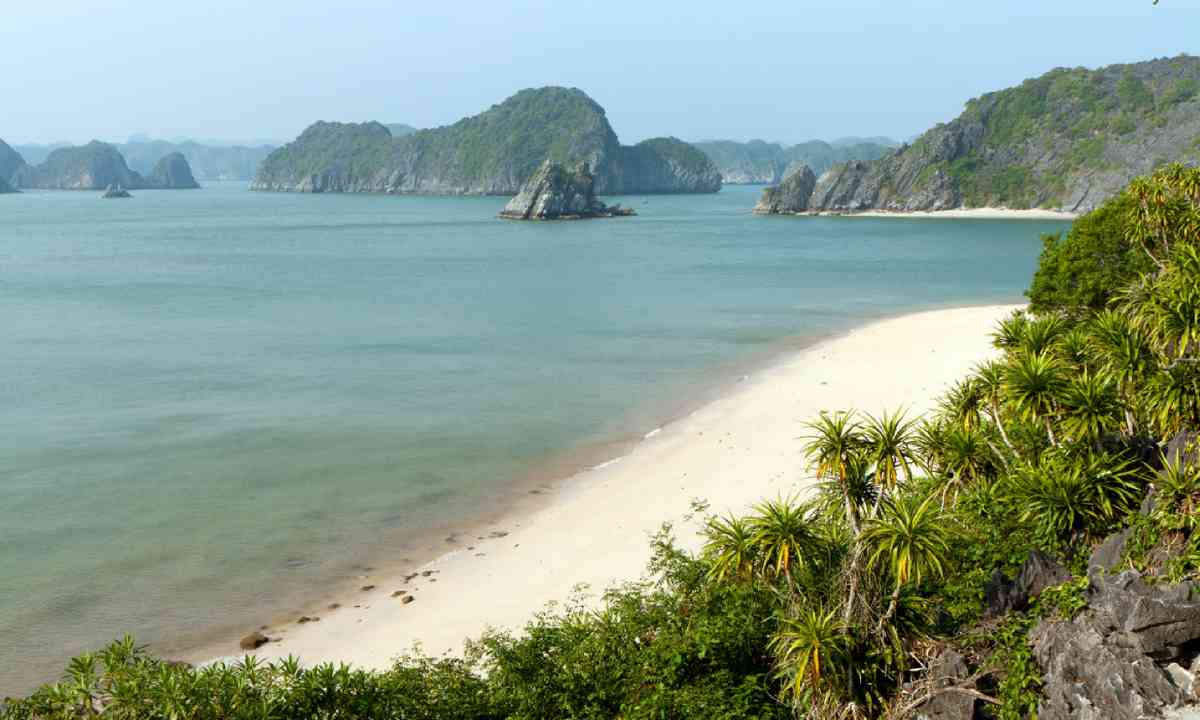 Hai Pai (also known as Tiger Beach) has the requisite good looks – blue sea, yellow sand, picturesque pinnacles – as well as developed climbing routes if you fancy trying to master the karst. It’s possible to camp right on the beach too.

The beach: Mui Ne
Where to find it: South-east Vietnam

Plenty of travellers have discovered Mui Ne. But that’s because the coast around this little fishing village in southern Vietnam, about 200km east of Ho Chi Minh City, is backed by some of the region’s most impressive, Sahara-style dunes. Mui Ne Beach curves for 12km around a bay on the South China Sea; largely low-rise resorts back much of the shore, but the area around the original village, at the eastern end, tends to be quietest. 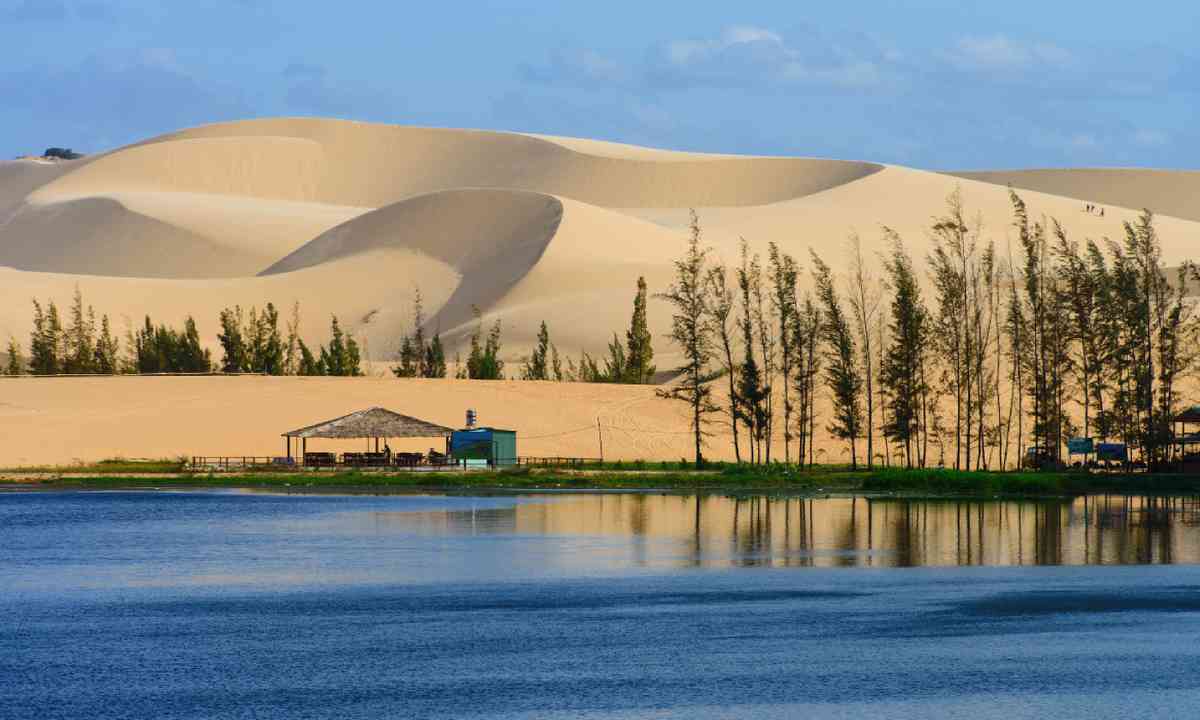 The dunes themselves ripple and roll just behind – the White Dunes are bigger, but the Red are more photogenic and fun to sled down. Indeed, Mui Ne is a bit of an adrenaline hotspot, with the surf swelling from August to December and breezes attracting wind- and kitesurfers from October to April – fun to watch, even if you don’t fancy having a go.

The beach: Balekambang
Where to find it: East Java, Indonesia

Balekambang isn’t necessarily the best beach for solitude – despite this long sandy stretch’s remote location on East Java’s south coast, it can be busy at weekends. But that’s because people come to see its unusual architecture: at one end of the beach, a bridge runs from land-side Wisanggeni Island to the tiny outcrop of Ismoyo Island, around 100m off shore. 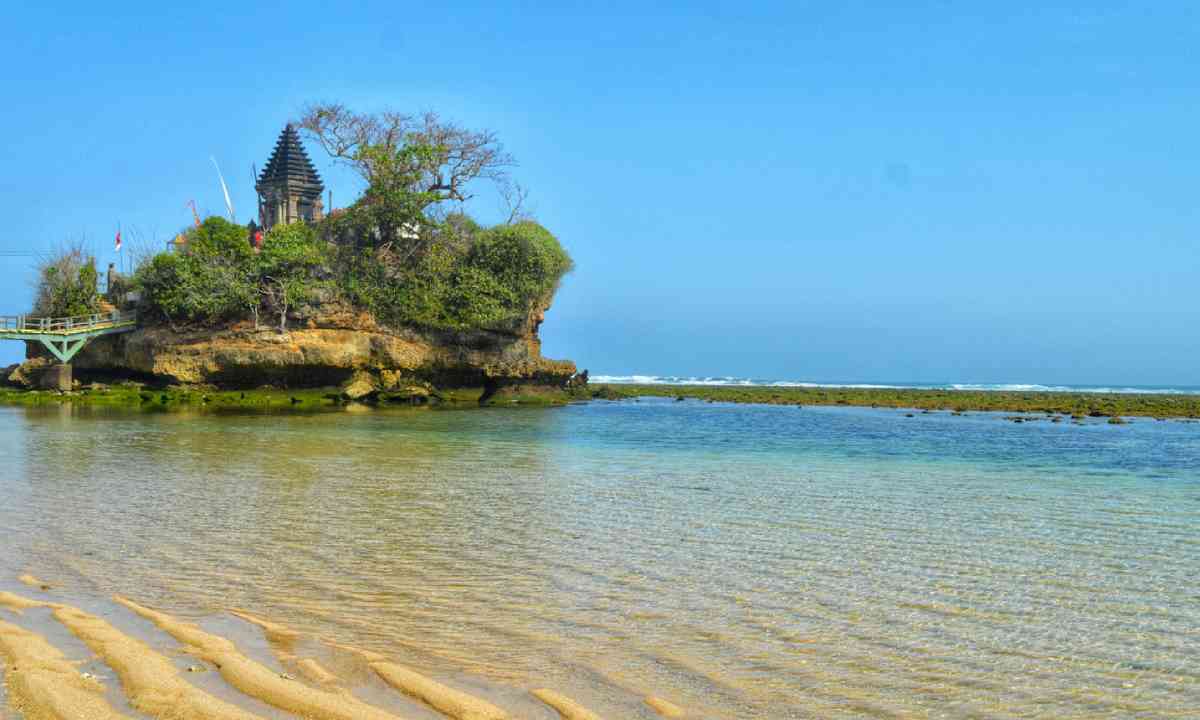 The rock is topped by a Hindu temple, where offerings are made to the sea – especially in the three days before Nyepi (Hindu Balinese New Year; usually in March). Visit the temple and laze on the tree-backed sand before heading inland: the steamy calderas of Mount Bromo National Park are just to the north.

The beach: Secret Beach
Where to find it: Bacuit Bay, Palawan, Philippines

It’s tough to pick a best beach from the many on offer around sublime Bacuit Bay. Off the north-west coast of Palawan, this scatter of karst islets and outcrops, incised by jungly rivers and highlighted by luminous strips of sand, is one big sand-lover’s fantasy. But Secret Beach offers extra thrills. 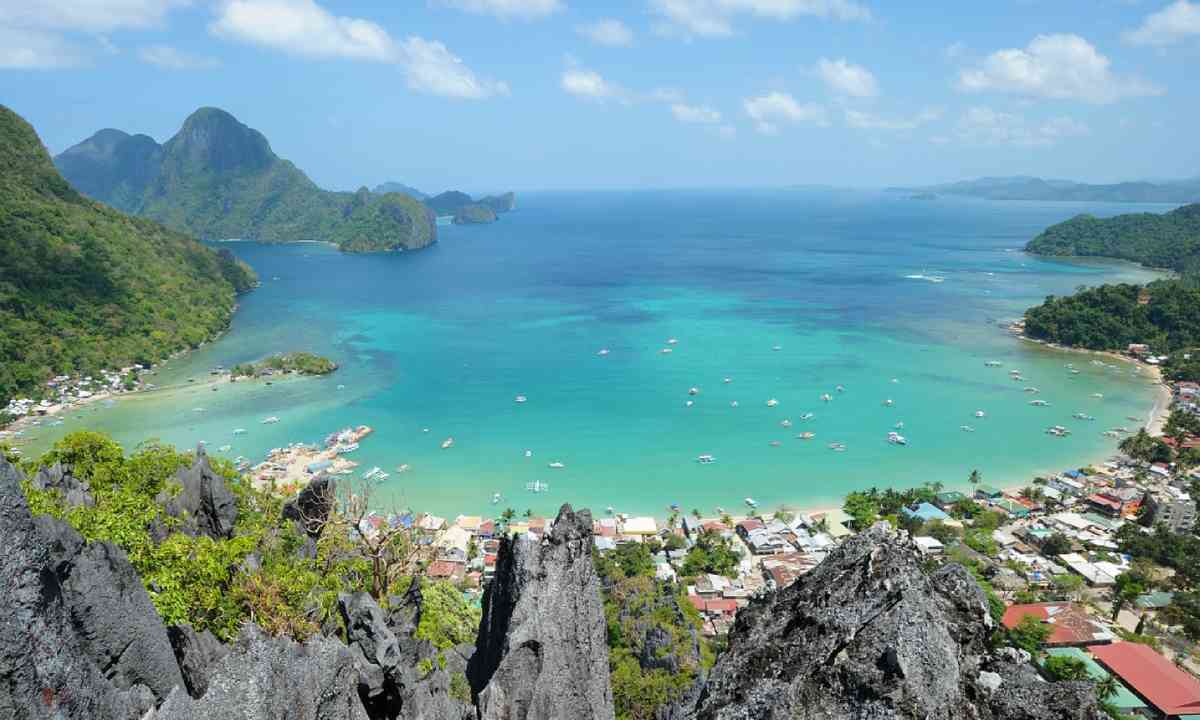 Hidden away on Matinloc Island, enclosed in towering craggy cliffs, this scrap of white fringes an almost inaccessible sinkhole. Almost. You need to take a boat and drop anchor by a tiny crack in the rock, then swim underwater, avoiding the boulder almost blocking the other side, to emerge in a magical fish-filled bowl, where the waters lap rock walls as well as that tiny little beach. It’s best visited at noon, when sunlight streams in.

The beach: Koh Thmei
Where to find it: Ream National Park, Cambodia 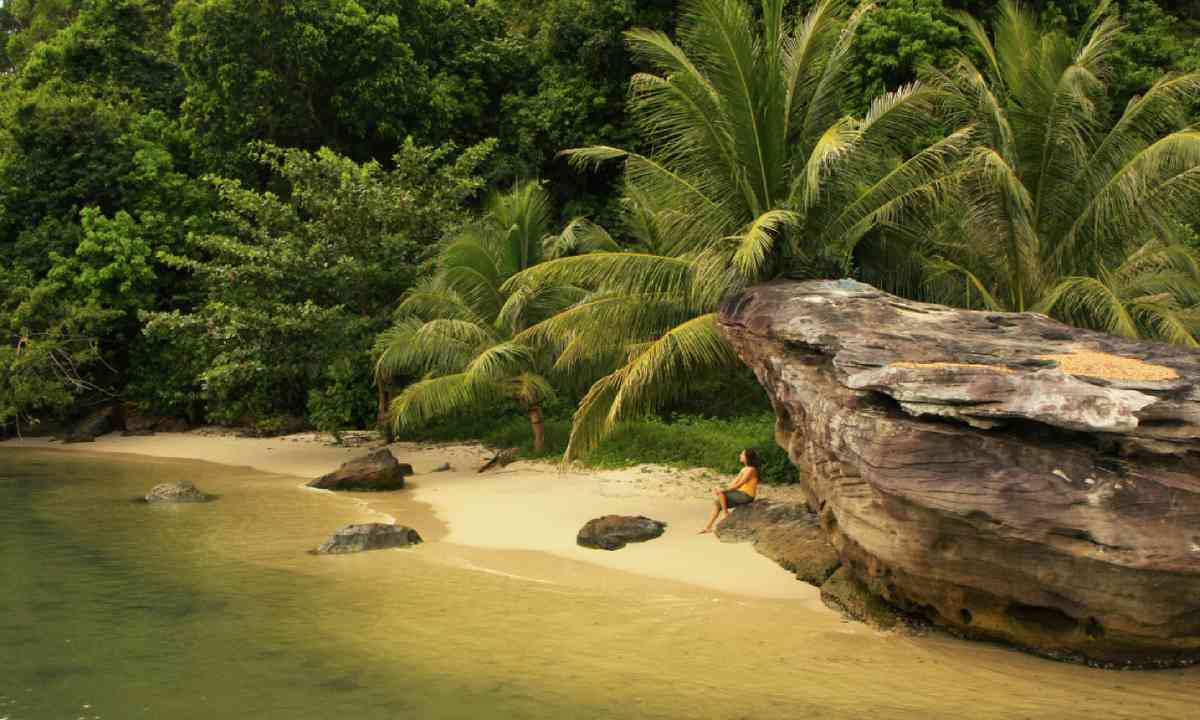 Its simple cabins sit on a fluff of yellow, shell-scattered sand and make a good base for both snorkelling and staring at the skies: around 150 species of birds – including grey-headed fish eagle, white-bellied sea eagle and Brahminy kite – live in Ream. Dolphins are often spotted playing offshore too.

The region just west of Flores is best known its oversize lizards: big, black Komodo dragons maraud on the dry, hilly islands of Komodo and Rinca. But this area, protected within a national park, is also an exceptional place to take to the seas. Pantai Merah (Pink Beach) is a pretty prospect – formed from fragments of red corals, it has an unusual rosy tinge. 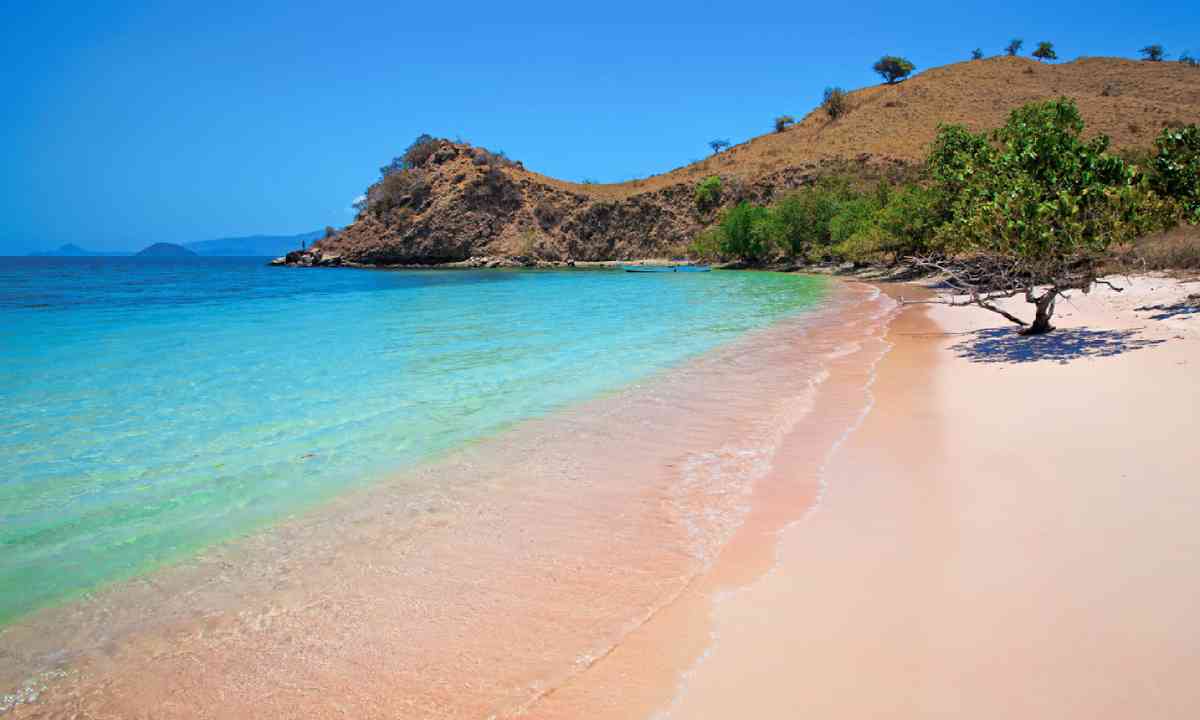 But offshore it’s even more colourful – there is world-class snorkelling directly from the beach, the sand sloping right into a pristine reef of vibrant corals and sponges, teeming with technicolour fishes. These waters also offer chances to see snappers, parrotfish, the occasional turtle, reef sharks, manta rays, dolphins and dugongs.

There are more than 800 islands in the Myeik (Mergui) Archipelago, and goodness knows how many beaches. But the sand fronting the village of Ma Kyone Galet isn’t just forest-fringed and pretty, it’s a prime place for meeting Burma’s Moken – the so-called sea gypsies. The Moken traditionally live their whole lives on the ocean, coming ashore only in the roughest weather, but recent years have seen several hundred settled on Bo Cho. 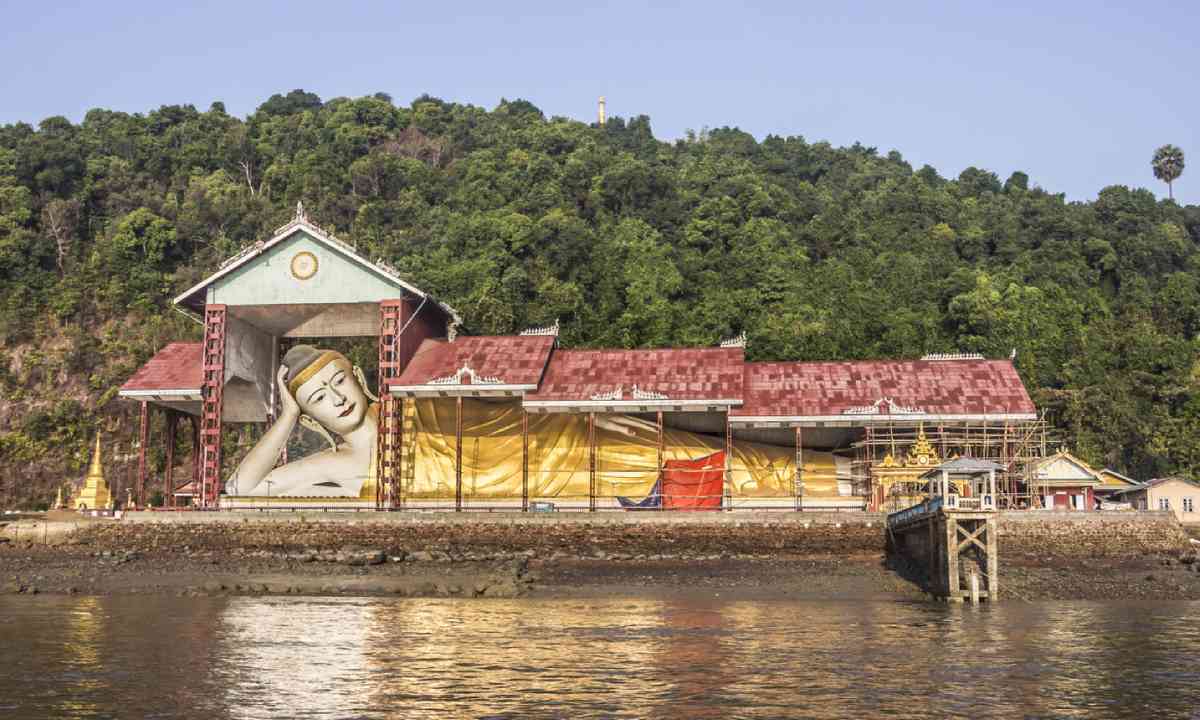 Giant reclining Buddha at the harbor of Myeik (Shutterstock)

Dropping anchor here, you can stroll along the sandy main street, lined with shops and stilt houses; you can walk up to the small Buddhist temple; and you can watch the men bring the catch ashore in the morning before feasting on the freshest of fish for lunch. The best way to get there, and to the rest of the Myeik Archipelago, is on a multi-day cruise expedition from Kawthaung, southern Burma.

This particular sliver of waterfront sits on an island within the world’s biggest crater lake, dimpling the island of Sumatra. As you laze on the pale grains, Lake Toba laps the shore, water buffalo work the surrounding pastures and the rugged edges of the vast caldera lie off in the distance – a compelling view. 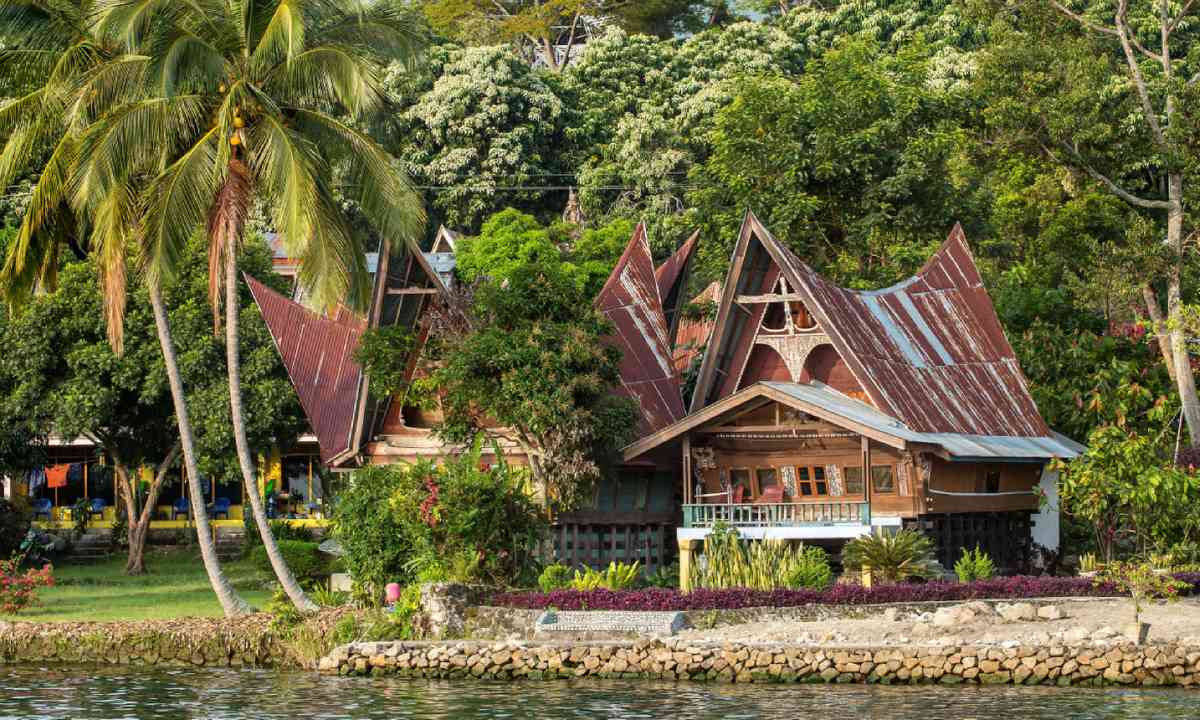 The beach hugs Tuk Tuk, Samosir’s main tourism hub, where boats zip across from Parapat. The village also offers an intro to the island’s Batak people and their culture – a mix of Christian and animist beliefs, puppet dances, stilted rumah bolon houses and cannibalism (phased out in the 19th century). Head south to the traditional settlement of Tomok to see the elaborately painted and gabled houses, neat rice barns and the impressive tomb of a key Batak chief.

The beach: Turtle Sanctuary Beach
Where to find it: Perhentian Besar, Malaysia

Sunshine, salt-white sand, crystal-clear seas... the Perhentian Islands, off the east coast of Peninsular Malaysia, tick the basic beachbeauty box. But on larger Perhentian Besar, a 30-minute speedboat ride from Kuala Besut, there is also the opportunity to join a local community-focused Ecoteer project to help protect the region’s endangered sea turtles. 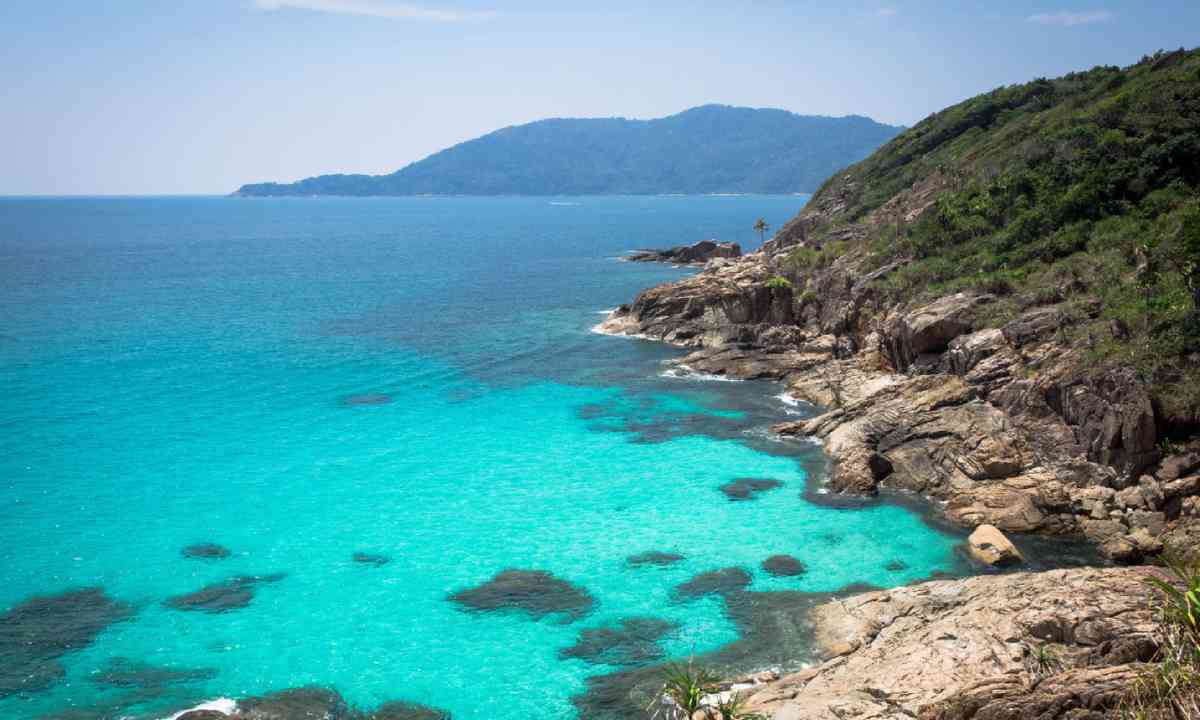 Tasks include night patrols to safeguard females that come onto the beach to nest as well as active daytime research: the seas here offer high-visibility snorkelling, and volunteers collect data on the habits of individual turtles while swimming alongside them.