Art Wolfe: “It’s the greatest spectacle on the planet.”

You’ve photographed wildlife, landscapes and different cultures. Which do you most like working on?

The minute I’m fully engaged in photographing some critter, that’s the most important thing to me. Yet when I’m walking the back streets of Havana in Cuba, finding abstract art in the decay, that’s the most important thing. It’s whatever I’m focusing on. Whatever country I’m in is my favourite country. That shows you how focused and determined and dogmatic I am. You have to be that way.

When photographing wildlife, do you often end up in the dirt?

Yes, I’ve been up to my ass in birdshit. You can’t be delicate about getting the photo. I live fairly cleanly, but once I’m in the bush, it’s all about the image and whatever it takes to get there without putting yourself at risk. Meaning: if you are going to be up to your waist in a swamp, you better make sure there aren’t any anacondas lying under the surface. 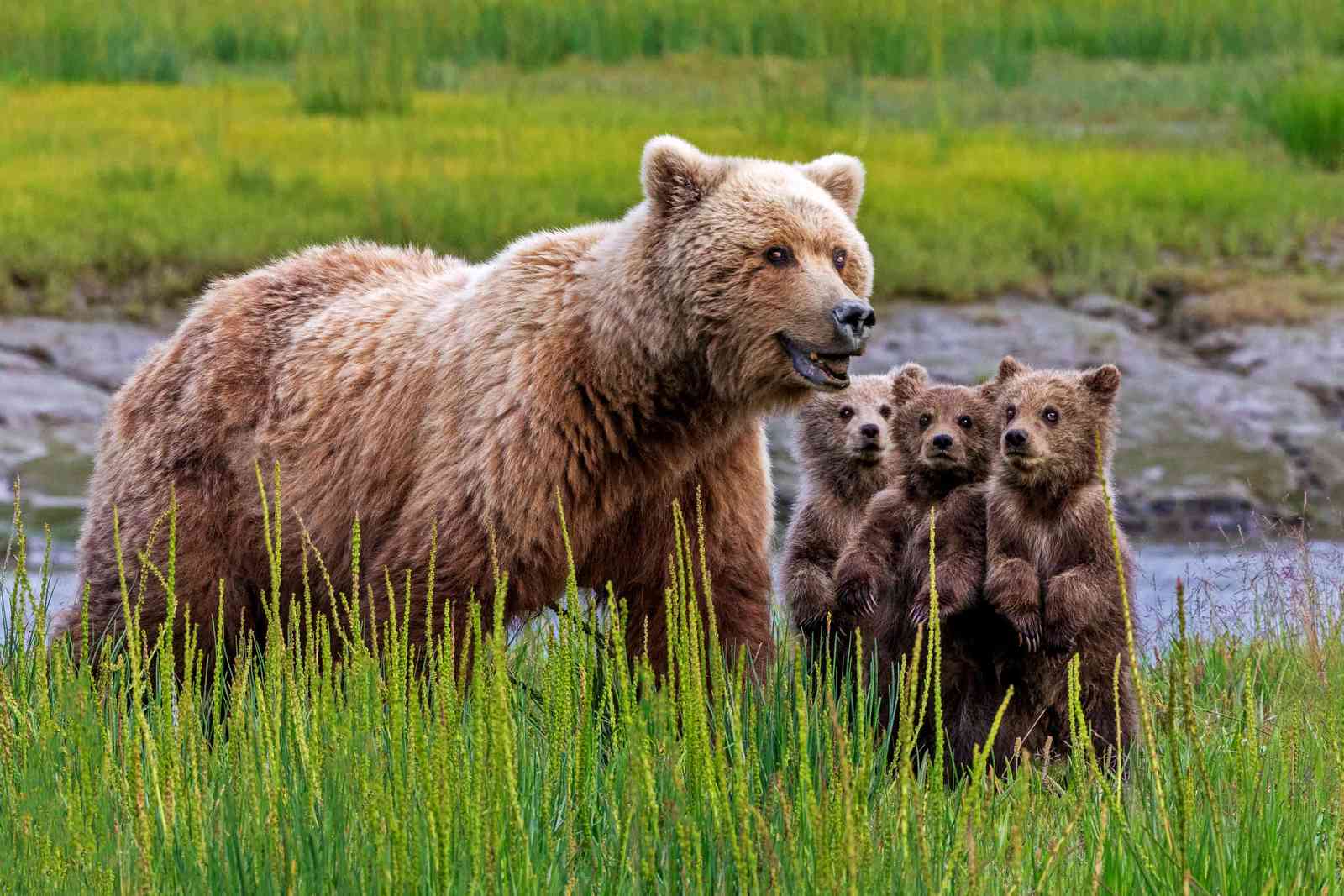 Have you always got that balance right?

The fact we’re having this conversation means I’ve got it right, but it hasn’t always gone smoothly. I’ve been attacked by a few animals, and those occasions were signs of ignorance on my part. I didn’t fully grasp the severity of the animal’s behaviour.

I’ve been attacked by a rhino. Over the years, there have been moose, elk.... Never a bear though, even though I’ve been really close to bears. Bears give you a pretty good indication if they are getting agitated and a smart guy would just back off when that happens.

In your new book Photos From The Edge, you say you were a conservationist and environmentalist before you were a photographer. How do you see the connection between photography and conservation?

Many of my photos over the years have been the centrepiece of campaigns to preserve a habitat or animal. If you're make a living of the natural world, you have to pay back to the natural world. And even if I wasn’t into photography, I would feel compelled to do that, because we all have that vested interest in keeping the Earth as healthy as we possibly can. 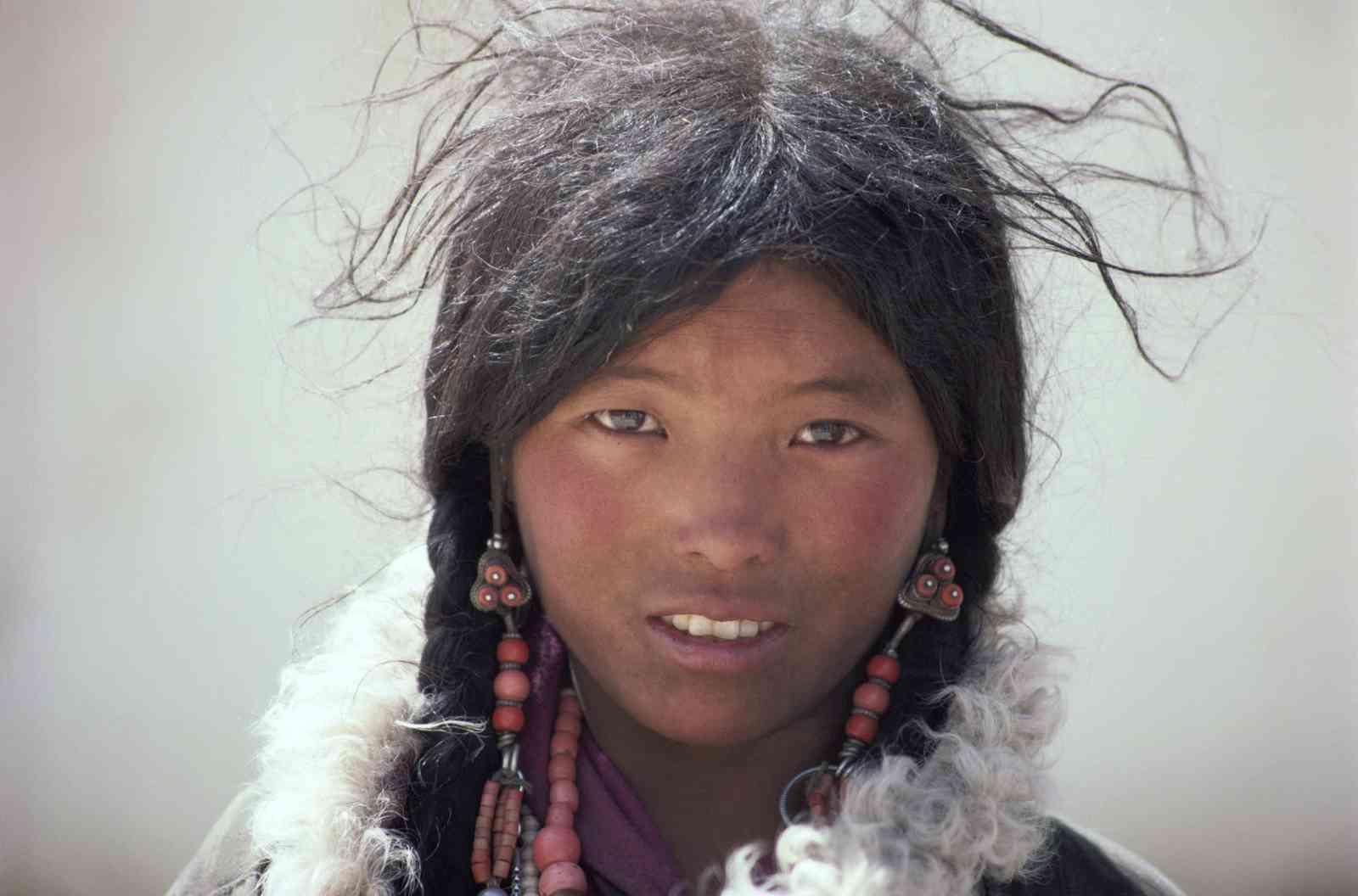 Check out: 18 incredible photos from Photos From The Edge

Do you see photography as a way to record ‘disappearing worlds’, or to stop those worlds from disappearing?

It’s both things. The Western creep of civilisation has got into some of the farthest reaches of primitive culture. I recognised that in 1984, when I was on Everest seeing people en route who’d not been photographed by people from Western cultures. Seeing the villagers of Tibet compelled me to go to the heart of the Amazon and the mountains of New Guinea, and record cultures that were largely still intact, wearing traditional clothing or no clothing at all. In that interim of 40 years since then, it proved to be a wise decision because in many cases I have photographed things that now no longer exist.

But I also like to bring to peoples’ attention to the fact that there are great stories out there of recovery. There are more whales in the oceans currently than there has been the last 50 years. There are more mountain lions in North America than there has been over the last 200 years. The pandas have been taken of the ‘Endangered’ species list and there is a baby boom of tigers happening in India. People need to hear that, so they don’t give up and think the world is heading to hell in a handbasket. 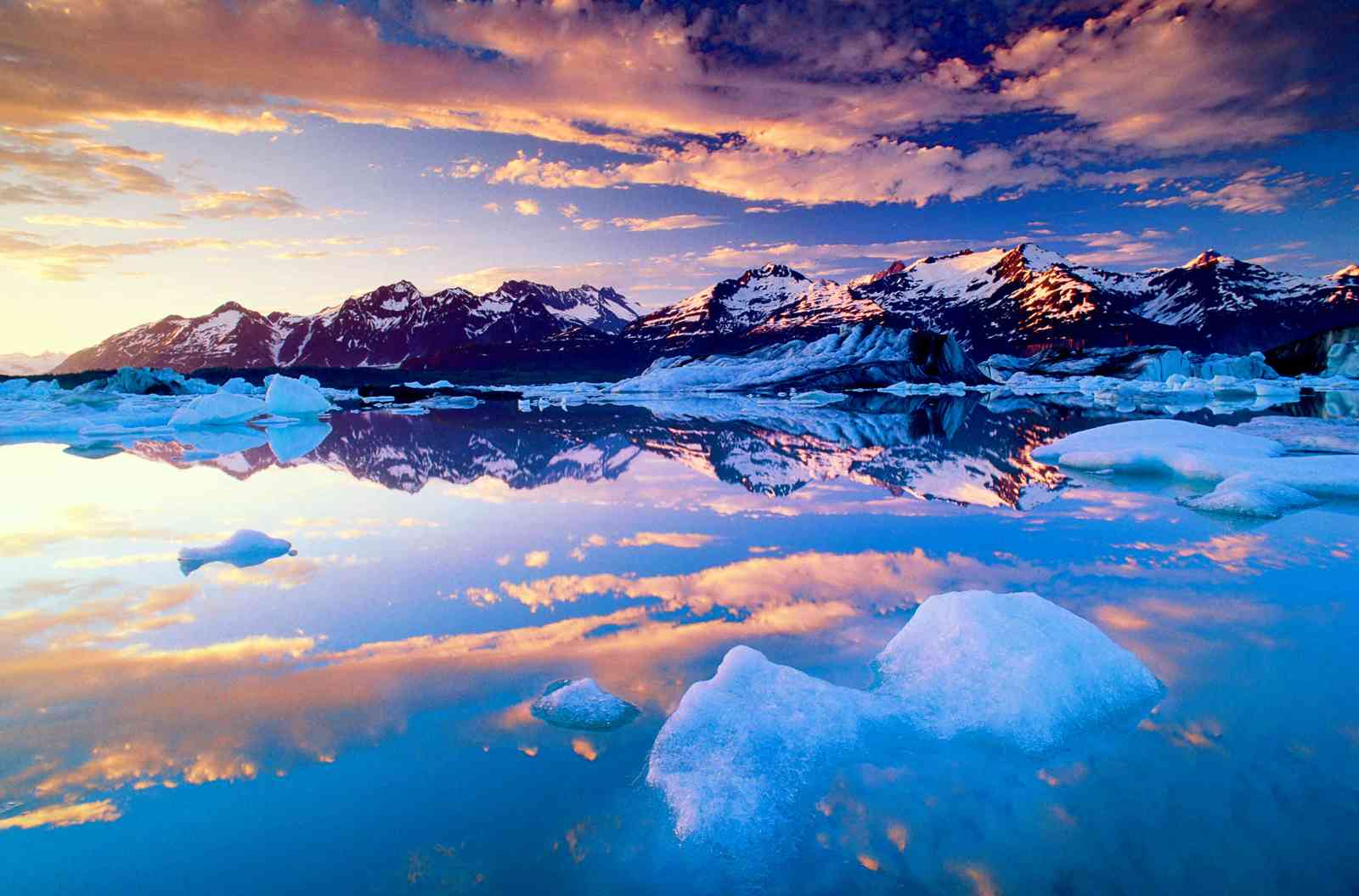 Have you seen solid examples where your photos have caused a change to happen?

One of my images was the centrepoint of a campaign in Canada to preserve a river valley. This was around Lake Alsek in Tatshenshini. It was just a complete intact ecosystem, replete with wolves and bears and all the things that exemplify wilderness in North America. The Canadian government was hell-bent on opening it up, turning it into a copper mine and building roads, which surely would have ruined the environment.

I was taken on a raft trip and I got one beautiful image that became the centrepoint of that campaign, which ultimately became successful. So many people felt compelled to write in to the government about how outrageous that mine would be that they just pulled the plug on it. 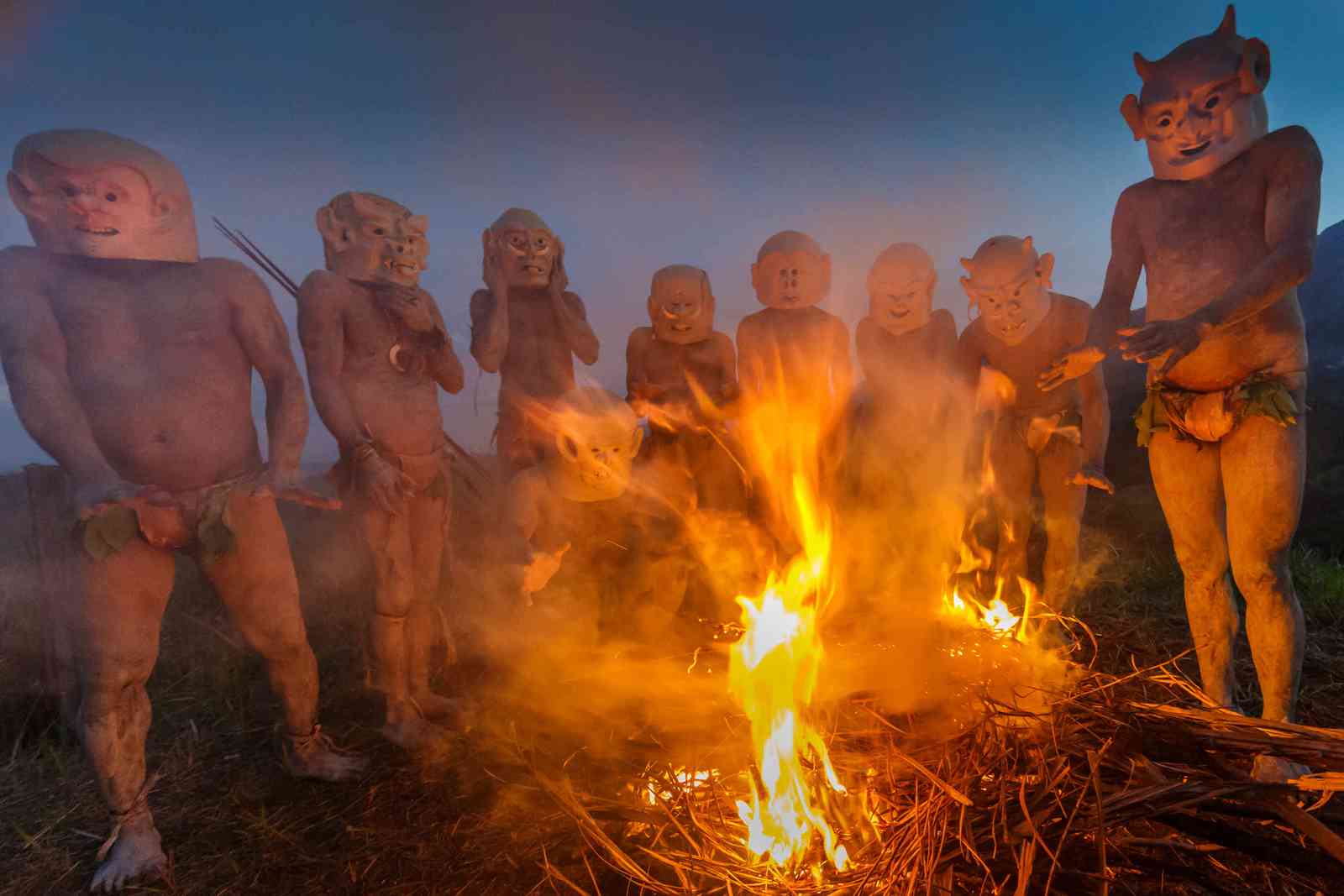 What was it like to spend time with the Asaro mud men in Papua New Guinea?

When I was first there, 22 years ago, in 1990, they wore basically clay helmets with two holes for the eyes and one for the mouth. Today, they’ve got adornment, they’ve got eyebrows, they’ve got designs. We tend to believe that technologically primitive cultures are always going to be that way but they are modern humans, so, like us, they’re constantly changing and evolving their art, their style, their culture.

But it’s my experience that, whether it’s London, Seattle, New York or any country in the world, people are really quite similar. From the perspective of someone who’s travelled as much as any human being, I can say the balance of people on the planet are pretty nice. That fact gets missed in the latest headlines about this bombing or that bombing. Most people are loving, peaceful people. The distinct religion doesn’t matter – people generally are just going to be nice to you. 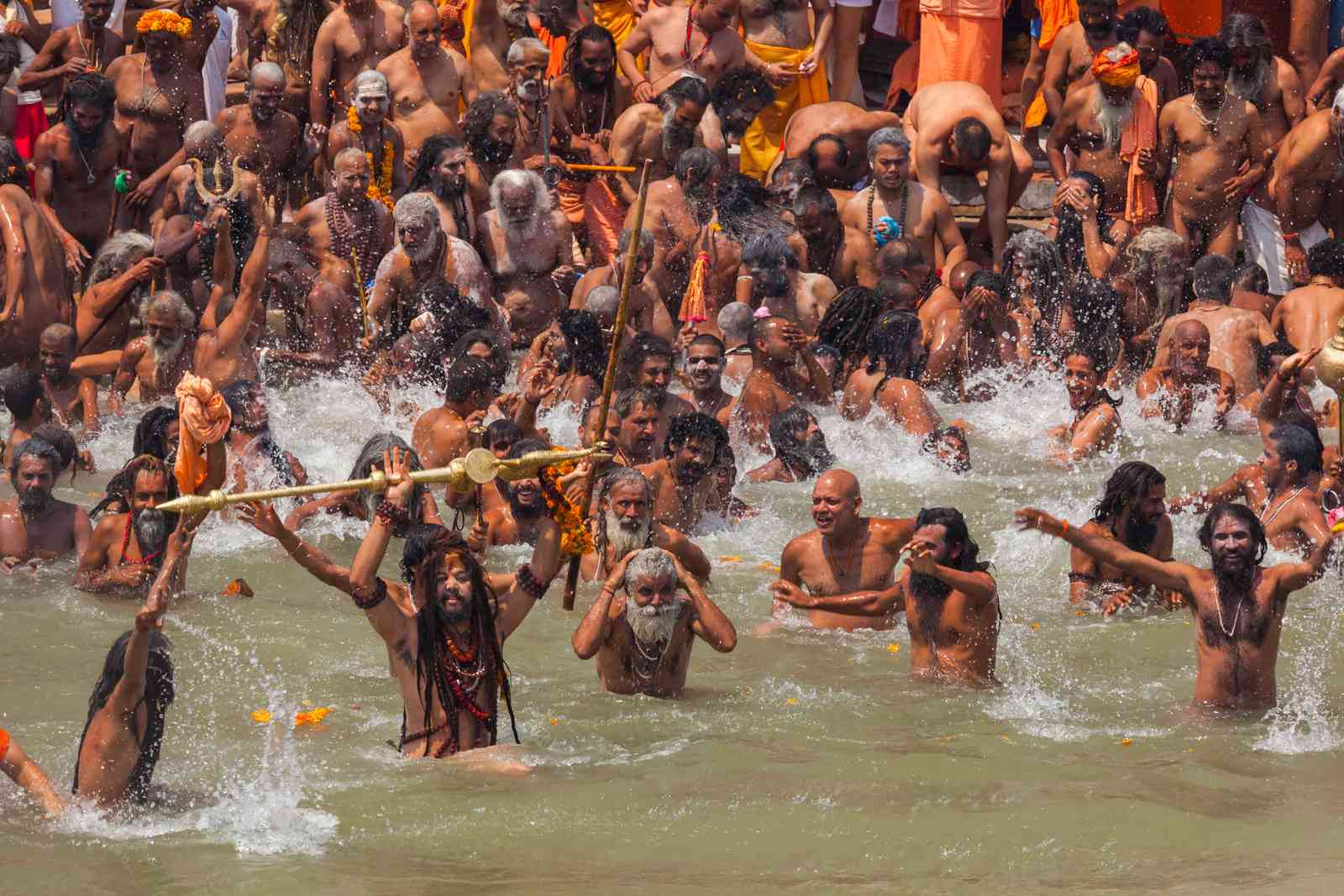 There is no question: it’s the Kumbh Mela in India. It’s the greatest spectacle on the planet because it's the greatest gathering of humans on the planet. On any given day, there will be 10 million people right in your face, so that is a pretty difficult thing to repeat anywhere else in the world.

It’s held every six years and the bigger ones are every 12 years. They are just crazy - it’s like Burning Men on steroids. You get completely naked sadhus walking around covered in ash, and all these people coming in from remote villages throughout India. Some villagers show up holding on to a rope because if they let go of the rope, they’ll be separated from the village and lost, so it’s a real scene. And then you get fire walkers, tightrope walkers, snake charmers, people that have never cut their fingernails. You got a broad stroke of humanity, and that’s what I love.

Culture shock stimulates the imagination and that’s the best thing that can happen to a photographer.

I just spent the better part of the afternoon on the computer ordering an underwater housing for my new 1DX Mark 2 with the idea that in the next book I’m working on, called Wild, there will definitely be a lot of underwater coral reefs. I’m on my way to Norway in January to attempt to shoot orcas underwater.

For me, the thing I love most is to surprise my audience. If they pigeonhole you as well as a wildlife photographer, that’s when I want to bring out a book print on culture. If they think I’m a culture photographer, than I’m going to do a book on abstracts. It’s always about the audience and entertaining them, inspiring them, uplifting them, surprising them. All that is part of being a photographer. 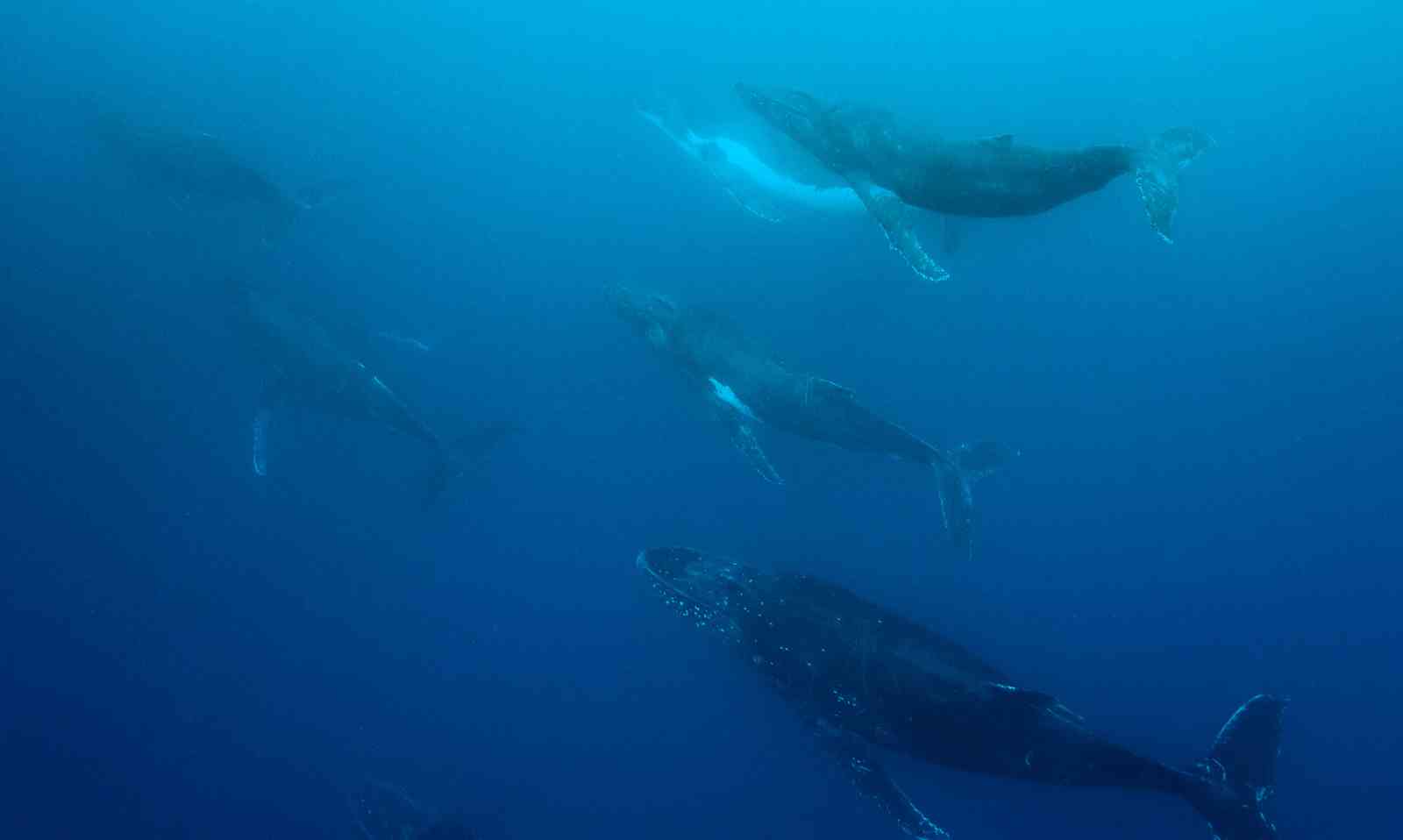 Is part of the appeal of photography the places it takes you to?

Definitely. Two weeks ago, I was on the crater rim on a Nyiragongo volcano in Congo, photographing the worlds largest volcanic lake. It’s amazing and when we got there, there was a vent that opened up and started exploding lava, a river down to the lake.

How do you take something that’s been photographed a lot, like monks or penguins, and give the subject a new spin?

The new spin is always the challenge. I’m on my way to South Georgia Island in November and I’ve been down there so many times. How do you shoot something old with a new perspective? The training I initially had in art and graphic design has always provided some sort of thing to fall back on, to move forward with a new idea.

But I’ve been doing this for 40 years and I can’t wait to get out the door to take the next shot. That’s the magic. And in today’s world, new technology is permitting us to shoot shots that we weren’t able to get five or six years ago so that’s part of the story. 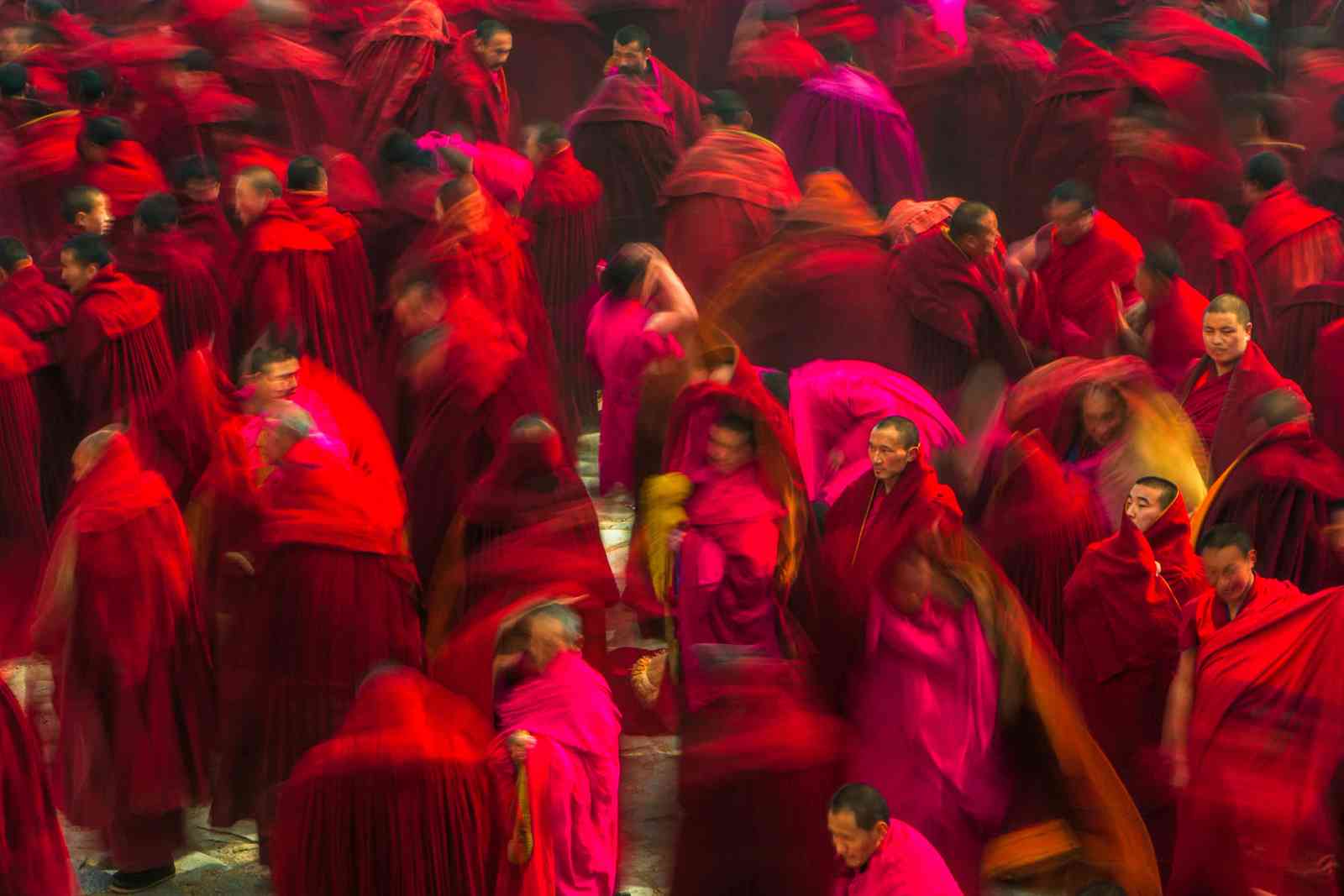 I’d do a book about those guys and call it Dinosaurs. I think the new technology as brilliant and it’s enabling us to shoot things that we could never even imagine before.

If you look at Michael's work, it’s pretty similar in every book he has ever done. I mean, it works for him and his black and white photos are about as good as it gets. It serves him well, but it is still one look. But that’s a different personality. My background is painting and art and always traveling and shooting a broad spectrum of subjects. 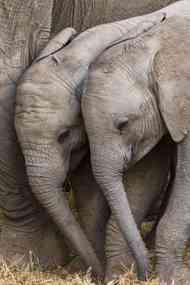 You’ve also been involved with the Remembering Elephants project and book. What are your hopes for that?

Remembering Elephants, along with other environmental groups, are really bringing to the world’s attention how fast poaching has re-infiltrated Africa on a large scale, to the degree that thousands of elephants are being lost every year and going down drastically. Once people realise that, active people, people that will approach their government, put pressure on the politicians. That’s my hope. This is that candle that needs to be lit.

Are elephants special to you?

I first went to Africa in the 1980. My main objective was to climb Kilimanjaro. I saw my first elephant and saw how these seemingly great creatures were so animated, so capable of exhibiting emotion and humour and play. From that very first time I ever saw a wild elephant, they have been one of my very favourite subjects.

Elephants are absolutely never boring. They are always doing something. Until people see them for the first time in the wild, they may not understand that fact.

Wanderlust is currently running a Photo Of The Year competition. Do you have any advice for making photographs stand out?

The first and foremost thing is to get out there and take a lot of pictures. If you’re constantly taking pictures, you can’t help but get better. If you are into anything, whether it’s cooking, writing or photography, the more time and effort you put into it, the better you become.

A lot of professional photographers also teach, so that’s another way of really improving your work: going to lectures and seminars.

It’s not like you’ll receive success in the first year. Taking great photos is a lifelong passion and journey.

Art Wolfe’s latest book, Photographs From The Edge: A Master Photographer's Insights on Capturing an Extraordinary World, is out now. See artwolfe.com for details.

Migrations: Wildlife In Motion by Art Wolfe is out now, published by Earth Aware Editions. See artwolfe.com for details.