Mouthwatering new recipe book Argentinian Street Food celebrates the humble empanada in all its forms. Read on for 3 delicious variations on this filled pastry classic...

It's hard to pin down the precise origin of the empanada, but it was probably inspired by a Spanish dish from the fifteenth century. Merchants and other nomads of the Iberian peninsula would take on their travels an easy-to-carry bread that they filled with a variety of ingredients.

Practical and simple to make, the empanada (from the verb empanar, literally 'to put in bread') has developed into a popular gastronomic item. From Russia to Italy via North Africa and France, the empanada has culinary equivalents in many countries. But France's rissole and Italy's calzone are nowhere near as famous as the empanada.


In Buenos Aires, casas de empanadas are found throughout the city. It's deluxe 'fast-casual' food, gourmet takeaway, cooked using quality ingredients like Argentinian beef, local vegetables, etc. You take it with you and eat it wherever you want, preferably with your fingers...


The empanada has an international reputation and the Argentinians have made it a jewel of their cuisine. From Salta to Buenos Aires, via Córdoba, Mendoza and Tucumán, the recipe varies. Olives, raisins, potatoes, eggs and other surprises, depending on the region, are added to beef, chicken, tuna, cheese, spinach or onions. Tucumán, which claims to be the province with the best empanadas, has even started a world empanada championship!

This recipe makes 20 rounds of dough, 14cm (5½ inches) across . Allow about 30 minutes of preparation time and 2 hours resting time.

1. Cut 325g of unsalted butter into small cubes. Sift 1kg of plain (all-purpose) flour into a large bowl. Add 25g of salt and the cubes of butter.

2. Rub the butter into the flour and salt with your hands until you have a sandy texture with no lumps.

3. Add 35ml of water and combine with the flour mixture using your hands. Add a little more water if necessary. Knead the dough on a lightly floured work surface for 10-15 minutes.

4. Form into a ball. Wrap in plastic wrap and refrigerate for 2 hours. 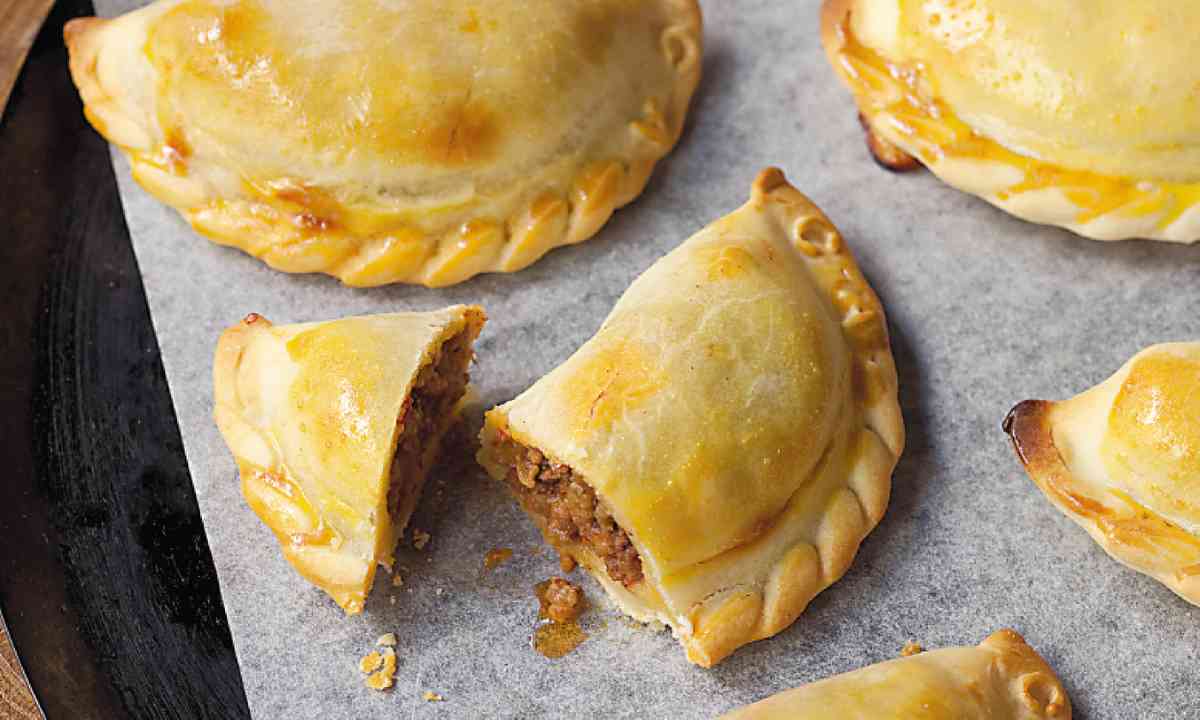 
1. Sauté the onion and capsicum in a saucepan with a little oil over low heat for 10 minutes. Season with salt and pepper.

2. Remove the vegetables from the saucepan and set aside. To the same saucepan, add a little more oil and sauté the meat over high heat. Once the meat has browned, reduce heat to low and add the onion and capsicum. Continue cooking for about 15 minutes, stirring from time to time.

3. Stir in the cumin, paprika and cinnamon and mix well. Let the filling rest for 24 hours in the refrigerator, if possible, for a more intense flavour. Stir the spring onion into the mixture before assembling the empanadas.

4. Preheat the oven to 190°C (375°F/Gas 5). Sprinkle a little flour on the work surface. Roll out the dough to a thickness of 3mm (¹⁄8 inch), and cut out circles with a 14cm (5½ inch) cutter. Using a 60ml (2 fl oz/1/4 cup) ice-cream scoop or measuring cup, form small balls of filling and place one on each round of dough. Lightly moisten the edge of the dough with a little water and fold over into a half-moon shape. Seal the edges. Set aside in the refrigerator if not cooking immediately.

5. Arrange the empanadas on a baking tray lined with baking paper. Brush with egg yolk and bake for 20 minutes, or until golden and cooked. Allow them to cool for a few minutes before serving. 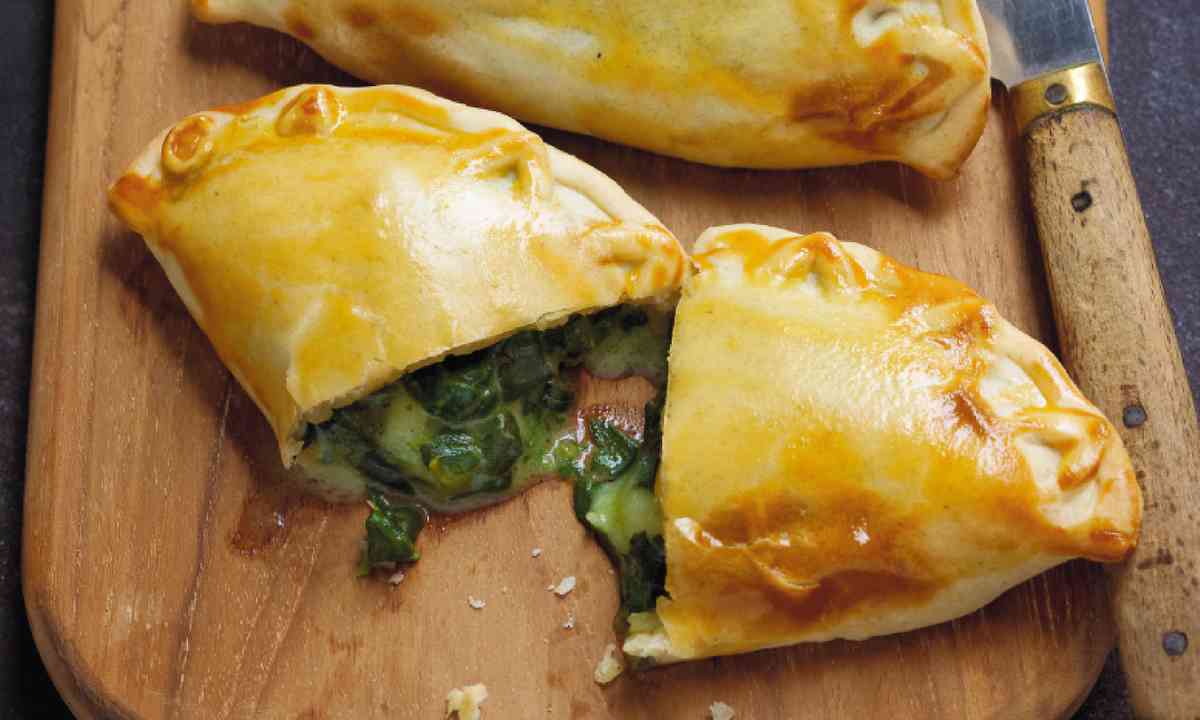 
1. Melt the butter in a saucepan over low heat. Stir in the flour and mix with a wooden spoon. Cook, stirring, for 4 minutes, then add the milk, stirring constantly to avoid lumps. Continue cooking for 10 minutes. Season with salt, pepper and nutmeg. Allow to cool.

2. Cook the spinach in a hot frying pan with a little oil until wilted. Drain thoroughly in a colander and roughly chop. Season with salt and pepper. Set aside to cool. Combine the mozzarella, parmesan and spinach. Add the cold béchamel sauce and adjust the seasoning.

4. Using a 60ml ice-cream scoop or measuring cup, form small balls of filling and place one on each round of dough. Lightly moisten the edge of the dough with a little water and fold over into a half-moon shape. Seal the edges. Set aside in the refrigerator if not cooking immediately.

5. Arrange the empanadas on a baking tray lined with baking paper. Brush with egg yolk and bake for 20 minutes, or until golden and cooked. Allow to cool for a few minutes before serving. 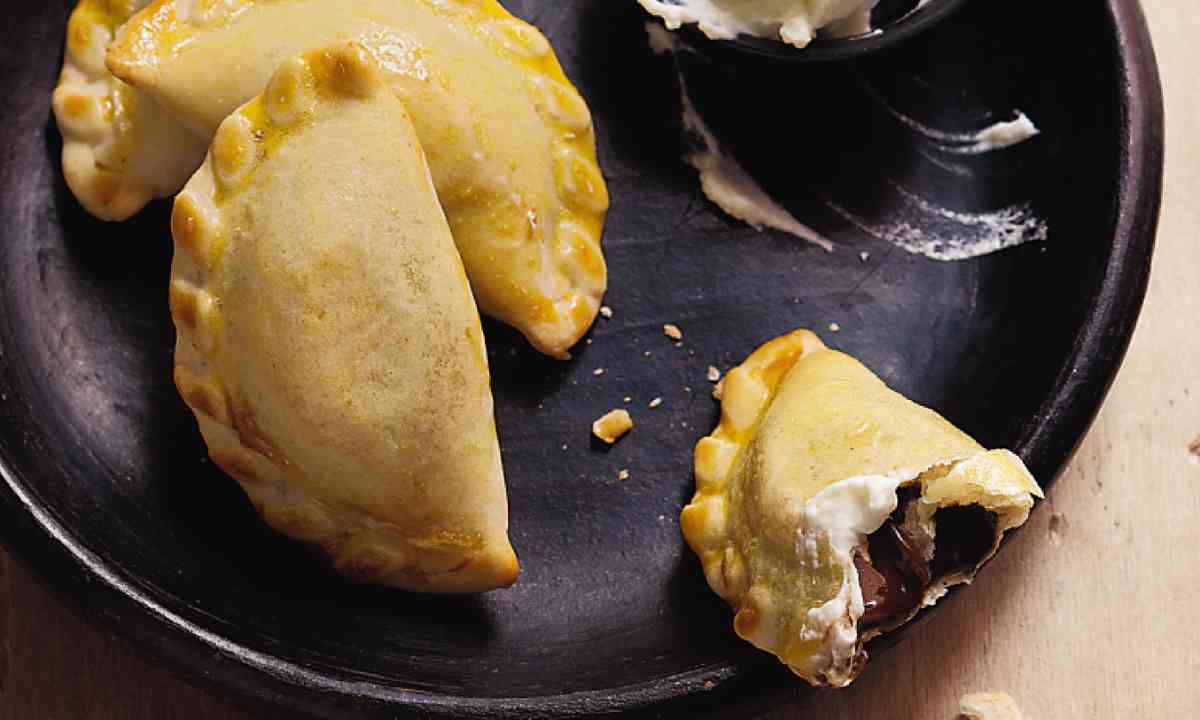 2. On a floured surface, roll out dough to a thickness of 3mm; cut out circles with an 8cm cutter.

3. Top each circle with two teaspoons of dulce de leche. Moisten edge of dough with water. Fold over into half-moon shapes; seal edges.

5. Whip cream and icing sugar until thick to serve with the empanadas.