5 ancient ruin sites to visit in Jordan, beyond Petra

There are many ancient cities to explore in Jordan, beyond the archaeological city of Petra. So, if you've made it this far, venture out to Jerash, Umm ar-Rasas and further afield...

Petra undoubtedly tops the list for visitors to the desert kingdom, as there's no shortage of incredible ruins to see. You could spend a week or more getting lost in Petra's living history.

But if you’ve made it to Jordan, reserve at least a couple of days to explore the many other centuries old architectural treasures dotting the landscape.

Here are five alternative ruin sites in Jordan worth seeing... 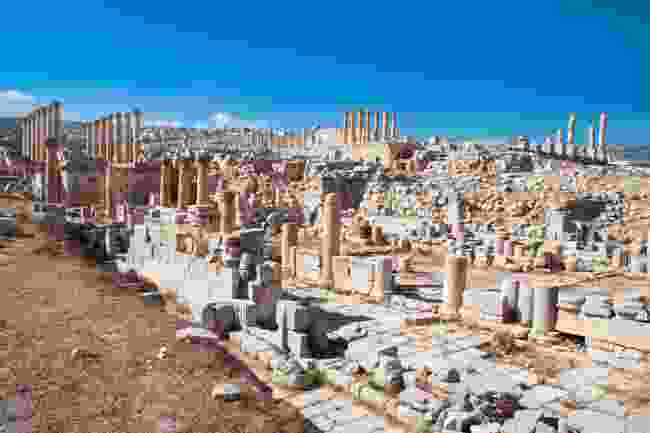 Second only to Petra in fame, the city of Jerash is celebrated as 'the Pompeii of the East'. The site remains impressively intact thanks to excellent architecture, and because it was left untouched for years, after an earthquake caused locals to regard it as cursed.

By all measures a grandiose city, some contend that Jerash represents the best collection of Roman ruins outside of Italy. Comprised of a hippodrome, trading stalls, domiciles, temples to Zeus and Artemis, early churches, water and sewage systems, two theatres, a mosque, a colonnade, a cardo, and more, Jerash affords visitors a look at the fusion that occurred between Greco-Roman and indigenous Levantine cultures.

Though all of Jerash is spectacular, the Nymphaeum is particularly striking. Constructed around 190AD, this imposing tribute to the nymphs is covered in ornate carvings, and once included lion head fountains. When Christianity became the region’s dominant religion, the Nymphaeum was repurposed for baptisms. The large basin in which these rituals were conducted still stands in front of the towering tribute to mythological water sprites. 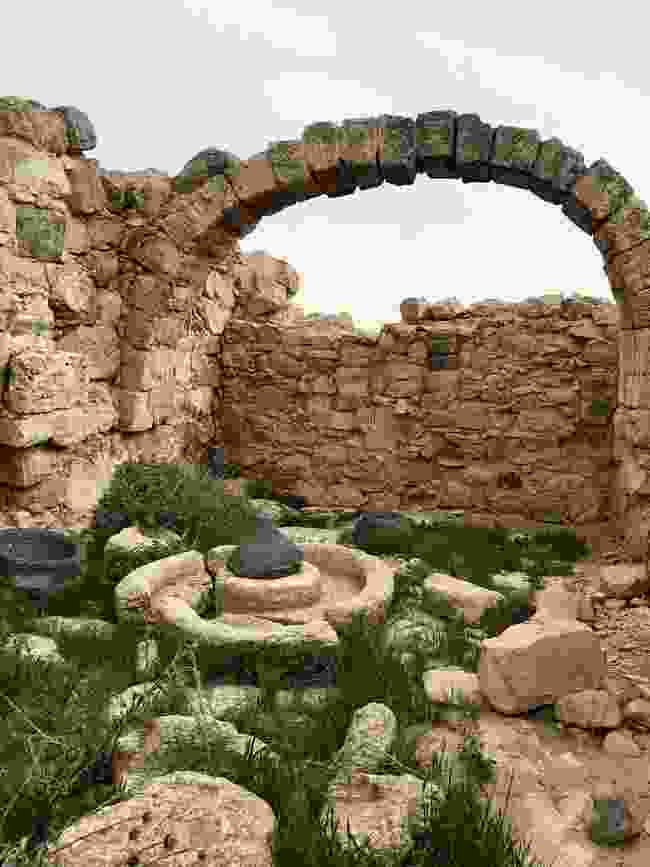 UNESCO World Heritage Site Umm ar-Rasas is a 45 minute drive from Madaba, the famous city of mosaics. Home to 16 Byzantine churches containing some of the region’s best ceramic art, Umm ar-Rasas is largely unregulated and much of it is un-excavated. Despite this, it's surprisingly well preserved, a veritable paradise for history and archaeology enthusiasts.

The Roman, Byzantine, and Umayyad Empires have come and gone, each leaving their mark on Umm ar-Rasas. Strolling around the arches, wells, residences, oil presses, and winery, you’ll spot plenty of exposed pottery shards and the occasional door carving.

While the most visually stunning part of Umm ar-Rasas is the of the Church of St. Stephen’s extravagantly decorated mosaic floor, the most unusual feature of the site is the 15 metre stylite tower, used by hermit monks as a retreat from the world below for a solitary life of prayer, fasting, and contemplation.

The tower is one of the few remaining specimens left in the entire world and thus invaluable evidence to this ascetic practice, which originated in the Levant. 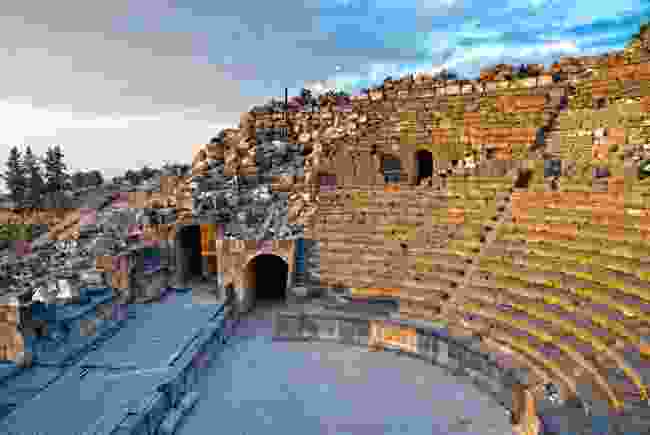 The city of Irbid, Jordan’s 'Bride of the North', is nestled in the verdant hills of the Jordan Valley and boasts another of the kingdom’s archaeological gems: the town of Umm Qais.

Once called Gadara, Umm Qais was one of the Decapolis cities that marked what was then the eastern extent of the Roman Empire. Over the years, it has been controlled by the Ptolemies, the Seleucids, the Nabateans (the builders of Petra), the Umayyads, and more.

Umm Qais contains many of the same structures found at Jerash: a church, a temple to Zeus, trading stalls, domiciles, a theatre, a cardo, and a colonnade. What distinguishes this complex is that some of the stone ruins are made of black basalt, creating an iconic dark and light colour scheme.

If you feel peckish after exploring, there’s a lovely café and restaurant located at the entrance to the site. There, you can dine on elevated traditional cuisine, sip local wine, and enjoy the picturesque view of the Sea of Galilee, Yarmouk River, and Mount Tabor. 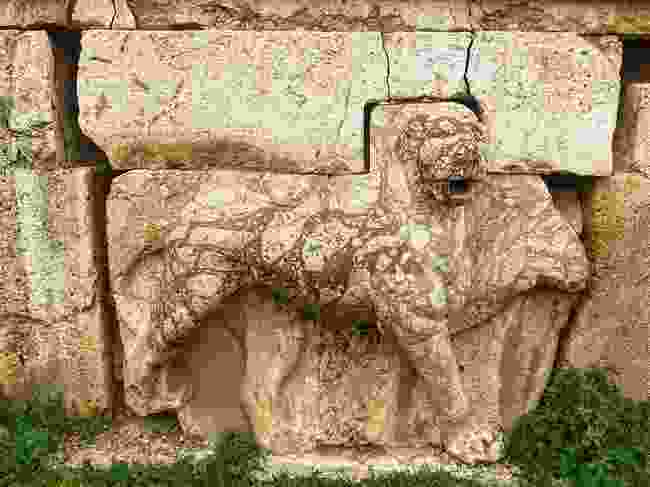 Part of the ancient site hidden away in the village of Iraq al-Amir, Jordan (Rebecca Byrne)

Hidden among hills just outside of Jordan's capital, Amman, is one of the country's best-kept secrets. The village of Iraq al-Amir is home to more than 10 caves that have been inhabited since the Copper Age, as well as the ruins of an Ozymandian castle.

Adorning the entrances to some of the caves, the word toviyah is carved in an early Hebrew script. It means 'love God' and is likely referencing the powerful Ammonite Jewish Tobiad family.

Nearby stands a once opulent castle called Qasr Al-Abd, which was likely built by Hyrcanus, head of the Tobiad family and the governor of Ammon in the 2nd century BC. Though worn smooth by years of rain and wind, lions still protrude silently from the of the castle’s outer walls, just as described in Flavius Josephus’s famous work, Antiquities Of The Jews.

Although the fortress was severely damaged in the earthquake of 362, it has since been partially restored. Surrounded by lush green hills, it’s a perfect place for a quick visit, especially if you’re coming from Amman. 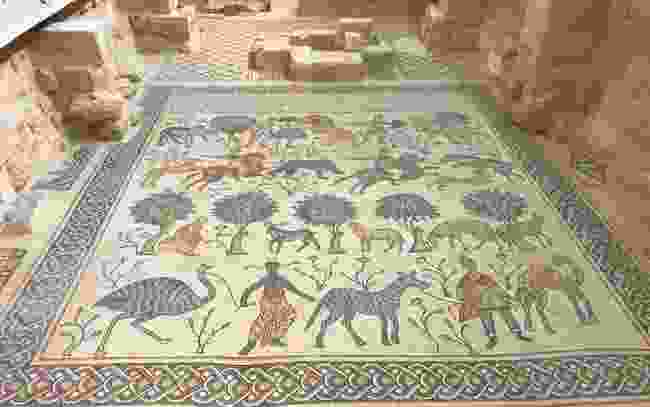 Believed by locals to be the place where Moses died overlooking the Promised Land, Mount Nebo has long been a destination for pilgrims. The remains of an ancient church are on display in a small museum and incorporated into the Moses Memorial Church, which stands on the same ground as its predecessor.

Of particular note is the Baptistry. Its floor is covered with an elaborate mural depicting hunting in the upper half and pastoralism in the lower half. Along with local animals like sheep, the scene also includes a peacock, a zebra, a giraffe, and a lion.

Besides the mosaics and museum, the view from Mount Nebo on a clear day is dazzling. During dry periods, the dramatic terrain resembles a moonscape, with the occasional oasis of plants popping up near springs.

Come March, vegetation erupts on the hills, infusing the area with life. From there, you can take in the Dead Sea, Jericho, and even (in pristine weather) Jerusalem.

The rest of Jordan's ruins - which to explore? 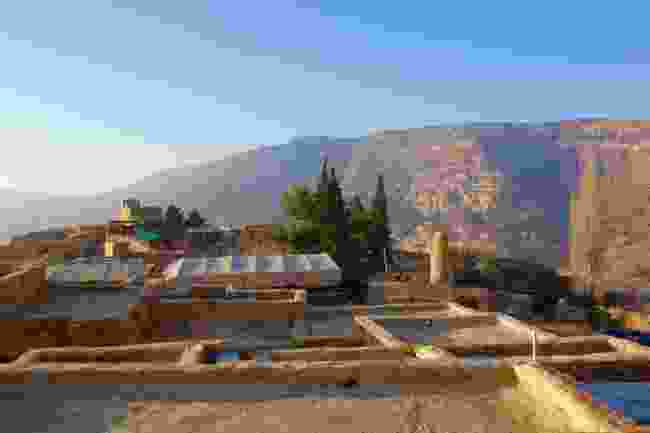 This list isn't exhaustive. Far from it, in fact. Visitors with a few extra days in Jordan should also set aside time for Umm Al-Jimal, Dana Village, and a few of the Desert Castles.

More inspiration for your trip to Jordan