An alternative Inca Trail... in Bolivia

In every issue of Wanderlust, we publish our favourite story from the Experiences page of the myWanderlust website. All of the Experiences are written by Wanderlust readers, amateur writers and travel enthusiasts, who share their stories online with the myWanderlust community. Each month, we select one stand-out piece of travel writing and publish it in the magazine's From The Road section, alongside articles by professional writers and editors.


The taxi’s engine hummed in the cold mountain air. I stood and wondered if I’d be OK with the altitude; not for the first time that day, my heart started to race.

The driver had pulled over to let me relieve myself and I was now seriously doubting what we’d let ourselves in for. A dark lake lay below me, reflecting my mood, its surface rippled by the keen winds whipping off the high peaks to the north. 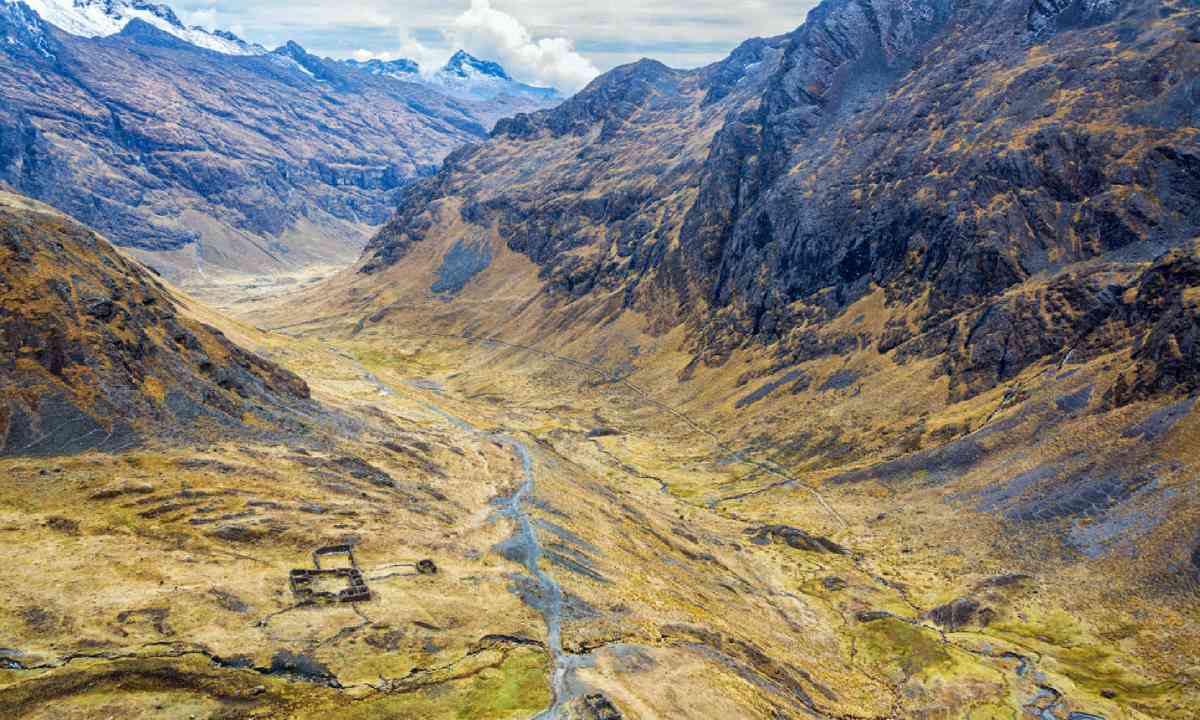 We were already at 4,000m and still had a way to go to the trailhead at La Cumbre, almost 1,000m higher up the road. I jumped back in the passenger seat of the ageing car we’d hailed back in La Paz and we started to climb the last few kilometres to the pass.

We’d opted to kill two birds with one stone and hike down from the heights of the Cordillera Real to Coroico, experiencing one of Bolivia’s most beautiful treks along paved pre-Columbian Inca roads while avoiding a section of highway popularly know as ‘the world’s most dangerous road’.

It had won this accolade on account of its regular fatal accidents, usually involving buses going off the edge and plummeting several thousand feet to the valley floor. There was, of course, the option of tearing down said road on a bike but the idea of missing out on the superlative scenery as it whipped by in a blur surrounded by a bunch of adrenalin junkies didn’t sound appealing, so my girlfriend and I had chosen the trek.

At the pass the taxi pulled away, made a U-turn and began its descent back down to the capital. We were alone with not a living thing in sight. Barren brown treeless slopes punctuated with shrinking patches of snow and ice surrounded us, while billowing cloud blown up from the lowlands swirled and danced.

The air was thin and as we set off we were finding it difficult to catch our breath. At 4,700m this was the highest we’d ever been but thankfully the telltale signs of altitude sickness had not kicked in.

We made our way to a ranger hut about 500m from the road and signed the logbook. As we scrawled our names and details on the crumpled page I had the feeling I was signing out of the known world and about to embark on a journey into the unfamiliar, the ‘other’.

Two couples and their guides had signed out in the past few days but that was it; the crowds that flocked to the Inca Trail and Machu Picchu were, for the moment at least, far, far away.

The feeling of walking into the unknown was further compounded by the fact we’d chosen to do this alone, without a guide, in an attempt to embrace wholeheartedly the spirit of adventure. There would be no hostels or guesthouses, no electricity or running water. For the next three days we were on our own with only the things we carried on our backs.

Looking back, the most physically demanding part of the 70km we covered was that first climb up from La Cumbre to Abra Chucura, a small notch in the hillside above us at almost 5,000m. The wending 2km track, taking us over stony ground and between small ponds, took at least an hour as our overworked lungs and thumping hearts did their best to carry us up to the highest point on our trek.

It was cold and the wind was biting at our faces. On the way we passed a small shrine where some locals were making off erings of alcohol and cigarettes to Pachamama, the goddess revered by the indigenous people of the Andes. As I made eye contact with one of the men and nodded a “buenos días” he passed me a bottle of what was near pure alcohol to make our own offering to the gods.

In light of what we were doing it seemed like a good idea to partake in the ceremony. Bidding our farewells, we eventually made it to Abra Chucura, at the watershed of the mighty Andes. From here it was downhill all the way to the Amazon Basin. 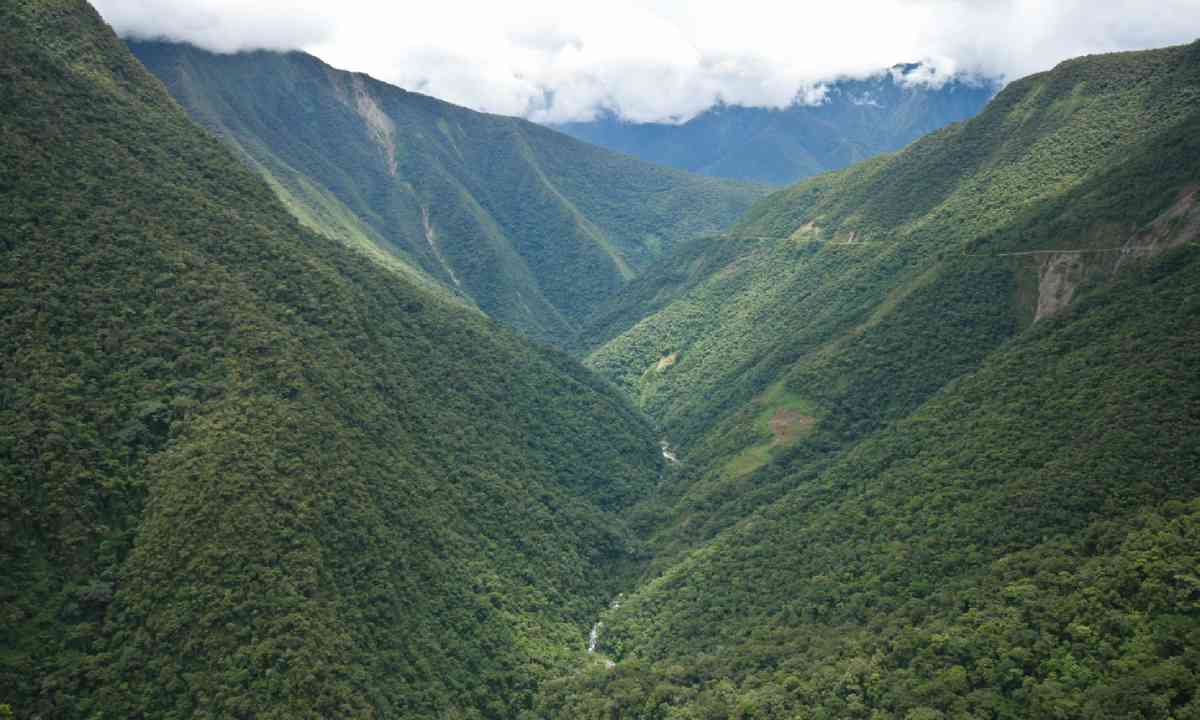 In Inca times the route that lay ahead was one of three important highways connecting the altiplano – a high plateau that covers almost half of all Bolivia – to the lower subtropical region known as Las Yungas.

It’s generally thought that the rock pavements, drainage channels and enclosed walls here are more impressive than similar roads in Peru. Also, these roads are known to have been in existence even before the conquest of the region by the Incas. I stood and pondered: how many people had walked these flagstones over the centuries?

The next few hours were incredible. Mile upon mile of ancient paving dropped out of the mountains as we lost altitude. We passed llama farmers driving their stock up from the valleys below to market in La Paz. Later, a lone man passed us with a huge beam of wood attached to his head with a rope, presumably for a building project. As we went through small settlements children would run out to greet us, smiling through their grubby faces and tattered clothes.

This was a land completely cut off from the outside world. Self-sufficiency was key to survival here, with anything else having to be brought in on foot or by mule. The landscape was changing too – bare rock was turning to tufts of tough grass that in turn morphed into pasture. As morning turned into afternoon, we spotted our first tree. Birdsong met us on the wind and before long we were walking through woods with the sounds of water gurgling as it tumbled alongside us.

By late afternoon we’d reached the 2,825m-high hamlet of Challapampa. We pitched our tiny tent next to the river and soon turned in, exhausted.

Dawn arrived with the sound of a roaring river and birds chattering; the air was still and chilly. We packed away our things, gobbled down cereal bars and set off on a day that was to involve ten hours of hard walking.

The first two saw us slipping and sliding down the paved pre-Columbian road that ran alongside the Rio Chucura to Choro, an idyllic collection of thatched adobe houses huddled on steep, narrow terraces cut into the mountainside. The air was humid and the vegetation was a vivid green, but we were both sweating and losing liquid fast. 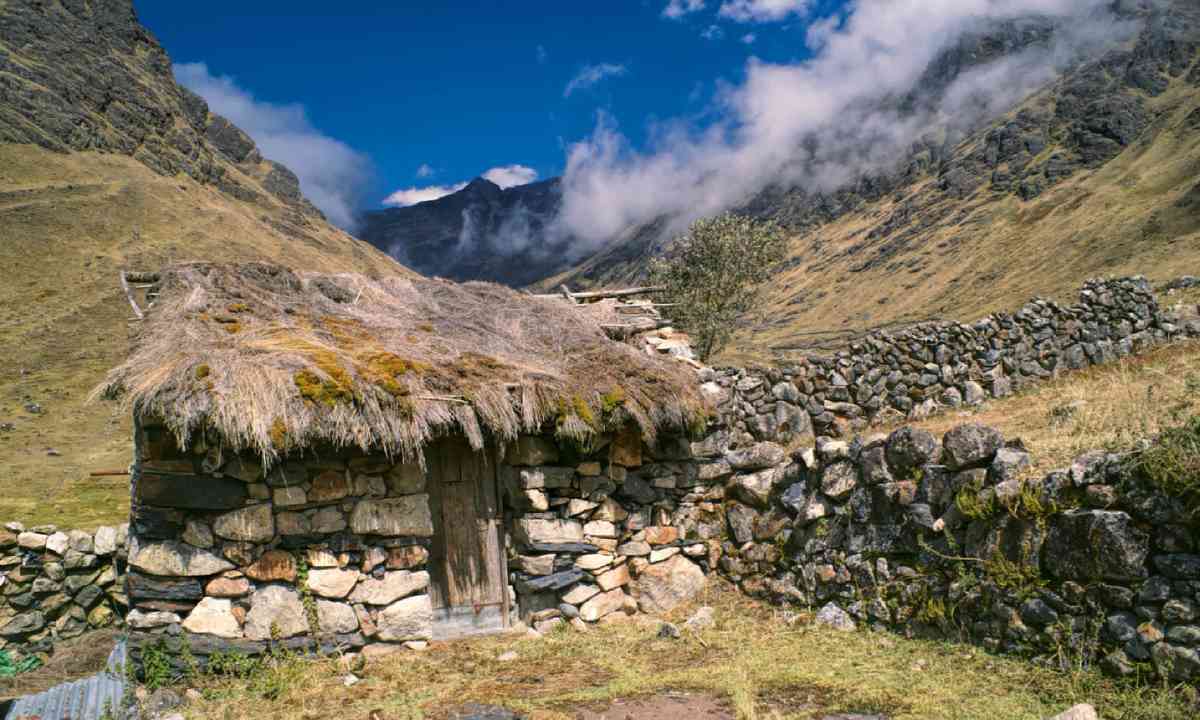 We left Choro, crossing its wooden slatted suspension bridge to turn east where the Rio Chucura met the Tiquimani. The trail now entered a section of dense vegetation where water was scarce.

We were starting to get hungry but our supplies were low. We had to make do with a packet of biscuits between us for the remainder of the day, and we collected and purified water whenever the track dropped down to cross a tributary.

We wound along the valley-side keeping more or less to the 2,000m contour line with regular descents and climbs out of gullies and gorges, fording their respective watercourses. In the afternoon we passed through the tiny hamlets of San Francisco and Buena Vista where dogs nipped at our ankles and chickens roamed free.

People greeted us as we passed their straw houses. Hummingbirds hovered, a sure sign that we were entering a more tropical climate. The light faded, our torches came out and we pushed our way through long head-high grasses wondering if we’d ever make it to our destination for our night’s stop. We finally made it in the deep darkness and pitched our tent.

I’ll never forget the view I unzipped from our tent that morning. Layer upon layer of lush green, forested mountainside backed by a few more layers of serrated sierras and finally, looming over everything at what seemed like the back of the sky, the glacier-cloaked 6,000m-plus peak of Huayna Potosí. 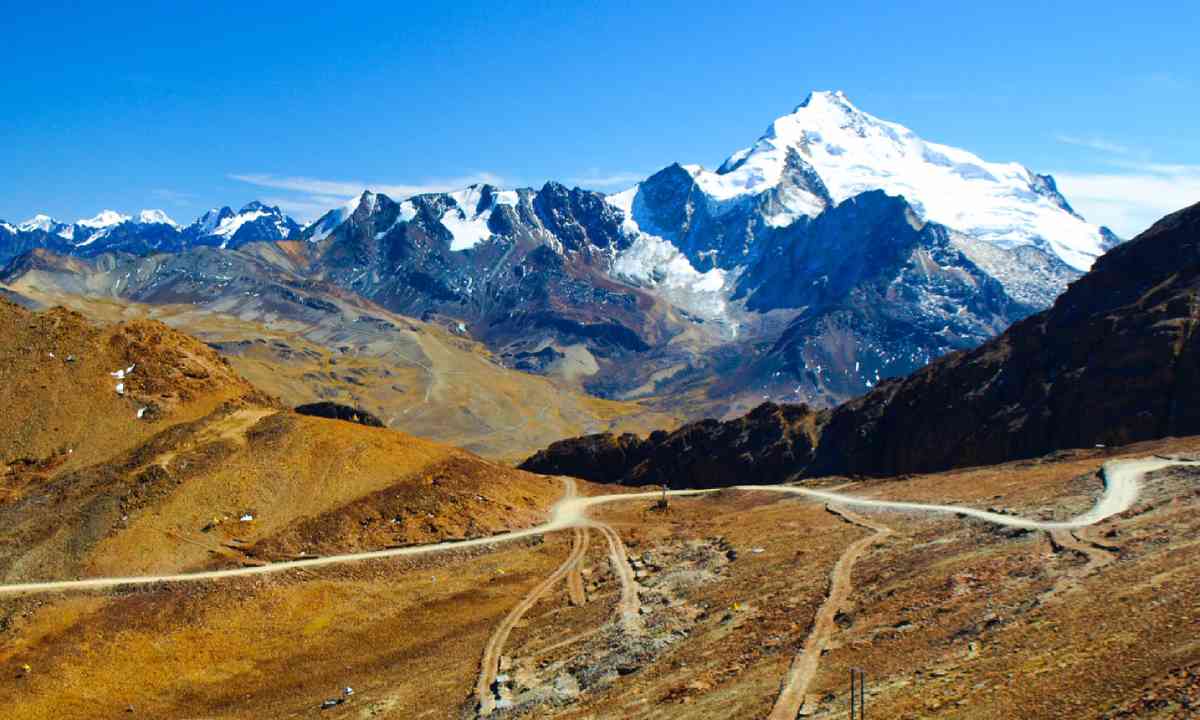 The rising sun behind us lit up each part of the scene in succession before hitting our tent and enticing us out for our breakfast of yet more biscuits. It got hot quick. Before long we were on the move once more and descending to the village of Chairo, the main road and civilisation.

Hitching a ride proved to be incredibly easy and within ten minutes of our arrival in the village we were bouncing and bumping our way along the dirt track that followed the valley floor to Coroico in the back of a pick-up that had seen better days.

Sat on my backpack I reflected on the past three days. We’d avoided a bus ride from hell, yes, but we’d also done so much more. We’d found a pocket of Bolivia that most travellers would never experience, seeing things at a slower pace. This had been different. This had been real. I’d looked deep into the eyes of the country. I’d tasted what it really means to travel and I wanted more.