“Look at that. It’s what people expect the Scottish Highlands to look like and they consider it beautiful.”

I followed the gaze of Innes MacNeill as he pointed along the valley to what was indeed a classic Highlands view. On the flat grassland near the river was a pastoral scene of grazing cows, while the steep sides of the glen were rugged and bare, denuded of trees.

A few hours ago I would have called it beautiful but I was now seeing the landscape through different eyes. I tried to imagine it as it would have been a thousand years ago or more. There would have been forest, home to a wide range of wildlife, including wolves, bears and elk. But, head ranger Innes explained, the original forest was cut down over a period of hundreds of years.

I was staying at the Alladale Wilderness Reserve, about 90 minutes north of Inverness. Formerly a hunting estate, its 23,000 acres were bought in 2003 by Paul Lister, who was – and still is – determined to rewild a piece of Scotland and restore its biodiversity. 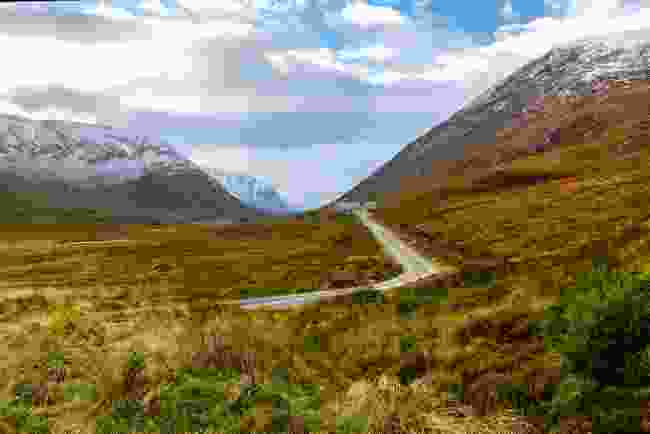 A key part of the rewilding is to plant trees. “We’re just short of planting a million trees here, but it’s a drop in the ocean,” Innes said. “We’re not trying to turn back the clock. It’s more a case of future-proofing the landscape.”

Scotland’s trees were principally cut down to be used for boat building or to clear grazing land for sheep. Then, in the Victorian era, large hunting estates became fashionable. The combination of that, plus lack of natural predators, resulted in deer numbers exploding, meaning in turn that there was no chance for trees to grow.
Guests staying at Alladale can book a guided 4WD tour – a kind of safari, Scottish-style. As we drove through the valley, Innes frequently stopped to point out the work he and the team have been doing here. We were following the River Carron and I asked whether there were any plans to reintroduce beavers. “No, not yet. We’d love to of course, but you need trees for beavers. It will be a long while until the habitat is suitable for them.”

Looking at the river, I could see what he meant. There were plenty of young trees but no mature ones. “We have a programme of riparian planting; trees such as alder, willow and hazel,” he said. “Trees are important for rivers as they attract insects and provide cover. Warm rivers are not good for Atlantic salmon. And, with declining numbers, they need all the help they can get.”

We went through gates and entered an area where tree planting had been taking place. Parking the vehicles, we took a walk through the glen, crossing and recrossing the river on stepping stones. A cuckoo provided an echoing soundtrack but on this warm morning the air also hummed with insects. As we turned up a hillside, we passed a thicket, home to a family of chattering wrens, and startled a female black grouse who shot out and flew into a tree. It felt alive, unlike the barren hills we’d seen earlier. 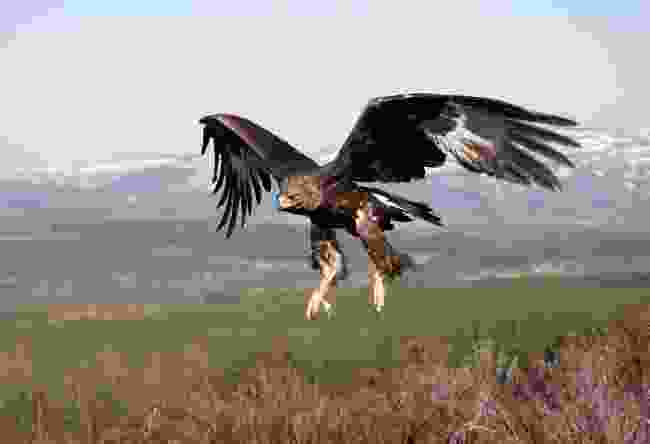 Alladale is home to a breeding pair of golden eagles, which have raised several chicks here (Alladale)

“These are some of the most northerly Scots pines in Scotland,” said Innes, “and we also plant hazel, hawthorn, rowan, juniper and aspen, depending on the soil and the position. There are ten of us who do the planting. We don’t want to plant in straight lines; it has to be natural. We’re just waving a magic wand as best we can.”

I had been surprised to see fencing bisecting the hillsides on either side of us. “Paul hates the fences,” admitted Innes. “But it’s all deer fence, necessary to protect the trees. They will be up for the next 20-plus years.”

There are around 550 deer here now, only 25% of the number that were present in 2003. “It was very overgrazed,” Innes said. “We do have to cull them; it’s the only way, there being no predators.”

Ah, yes, predators. Paul Lister has made many a headline over the years by advocating for the reintroduction of wolves into Scotland.

The man himself greeted us at the Lodge as we pulled back up, bouncing with restless energy. “Did you see the white-tailed eagle?” Paul asked. “One just soared by over there.”

We had missed it but were thrilled to see red deer stags grazing to the side of the house, clearly unperturbed by the presence of humans.

“If you want to see red squirrels go down there in the morning,” Paul gesticulated to the front lawn where large bird feeders hung.

Over a lunch of gloriously fresh produce, all sourced locally and mostly from the estate’s aquaponics project (including the fresh trout), Paul explained how the red squirrels had been successfully reintroduced to Alladale and neighbouring properties. Camera traps had revealed other native animals, such as pine martens, appearing naturally in the forested sections of the estate too. “It proves,” said Paul, “that if you provide the right environment nature will find it.”

One native species that does need a bit of help though is the Scottish wildcat, and a captive breeding programme is being hosted at Alladale. We walked down to a series of enclosures, home to several individuals that have been tested for genetic purity. In one, four kittens played. They looked like domestic tabbies – until they hissed. Then you realise these really are wild cats. 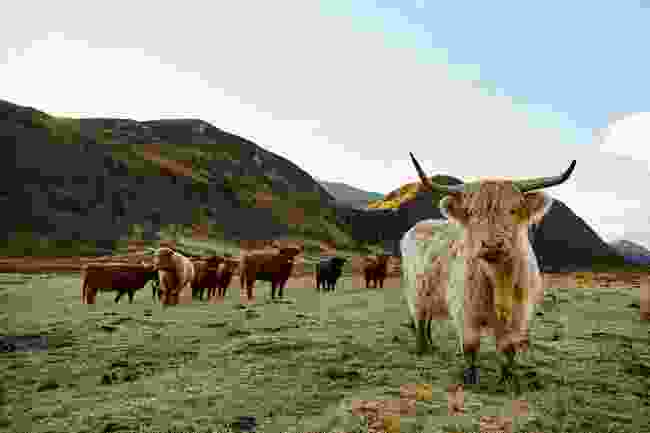 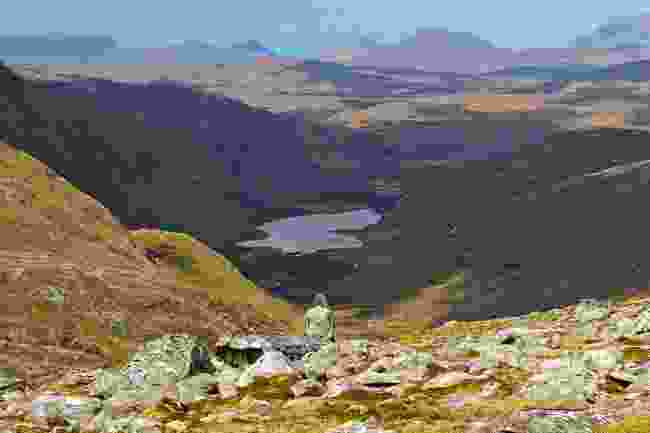 But it is for his desire to reintroduce wolves that Paul has become best known. “Wolves had long been on my radar as an apex predator and I thought it would be great to have them back in Scotland,” he told us. “I wanted somewhere large enough to hold ten to 15 wolves. Look how successful it has been reintroducing them into Yellowstone. But I can’t see it happening here, not in my lifetime anyway. Now, reintroducing lynx, that may be more acceptable...”

If people ask Paul what his purpose is in life, he says it is “connecting people with nature”.

Tourism is important to the reserve both as a way to achieve that goal and also as a form of income. A stay in one of Alladale’s beautiful properties isn’t cheap but it has immeasurable benefits. “Some people just have their PA book it and don’t really understand what we are,” laughed Paul. “But they hopefully leave with a much greater understanding and appreciation for nature.” 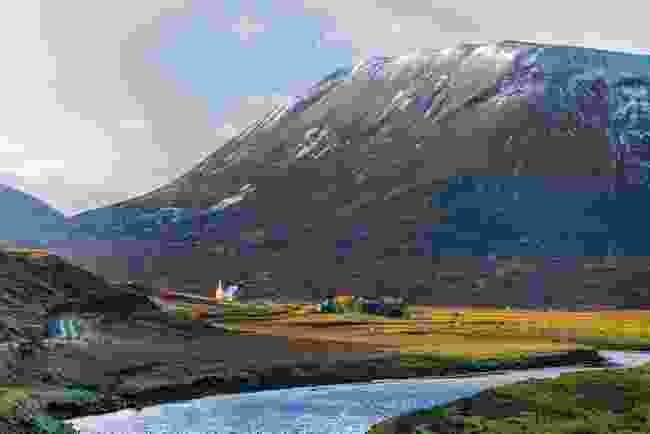 Just before I visited a female executive had stayed a week on her own out at Deanich Lodge, probably one of the most remote properties in the UK and with no phone signal or WiFi. She wanted to truly get away from it all. Innes was concerned to realise that she didn’t know the basics, such as how to light the lodge’s woodburning stove. But all went well; she said it was just the recharge she needed and that she would certainly be back.

The next day I visited Deanich Lodge myself. The one self-catering property on the reserve, it’s billed as a bunkhouse but is far from basic, with central heating, a kitchen and tasteful living room. Former landowner Sir Charles Ross reputedly shot a stag from his bathtub here – just one of the legendary tales of the estate’s former occupants.

Deanich sits in an epic landscape; a broad, windswept valley where golden eagles soar and with views of snow-capped peaks even in summer. But there are plans underway to rewild. “Planting trees here is a challenge as you can imagine,” said Innes. “It is so open and exposed. But it will look very different in a hundred years.”

I’ve never before been anywhere that I dearly wished I’d be able to go back to in 100 years. Or even 50. However, in this case I regretted that I wouldn’t be around long enough to see those changes. I also felt a sense of optimism for this pocket of Scotland – Alladale really is about making a more positive future. But, for now, I just wanted to hide away at one of Alladale’s lodges for a week in perfect solitude. 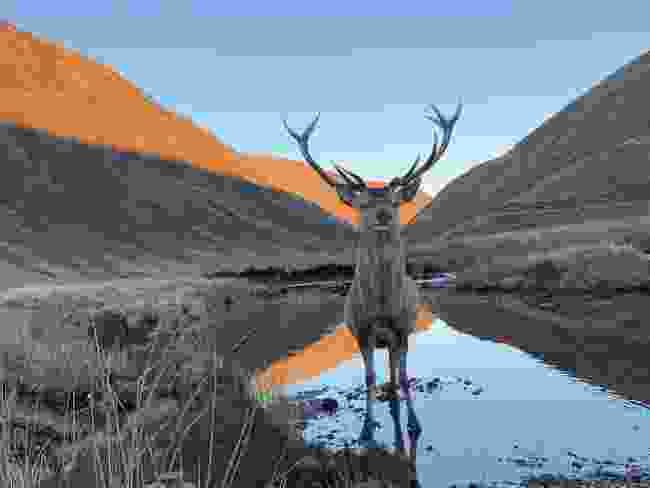 Red deer stags have big, branching antlers that increase in size as they age – they can grow up to a metre wide and weigh as much as 15kg (Alladale)

Alladale is in Sutherland, north Scotland. It is a 90-minute drive from Inverness Airport; cars can be hired at the airport (Alladale has a preferred partnership with Aberdeen 4x4) or taxi pick-up can be arranged.

Ranger-guided 4WD tours and hikes give an insight into the rewilding work of the estate and are highly recommended. Mountain bikes can be hired and are an ideal way to explore. Alladale also makes a good base for exploring northern Scotland; activities such as whisky distillery visits, dolphin-watching and canoeing are possible.

Alladale has four properties for exclusive use. Three are fully catered; Deanich Lodge is self-catered. A week at Deanich costs from £2,750 for up to eight people (additional people cost extra, sleeps up to 18); a week at Ghillie’s Rest (pictured below) costs from £2,950 for two, fully-catered. Various courses and retreats are held here and some wildlife tour companies offer stays.

The best things to do and see in Scotland

25 of the best wildlife adventures in Scotland