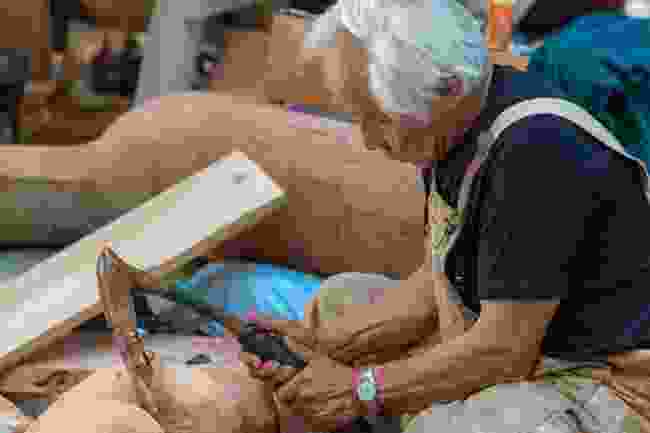 The relatively warmer temperatures and abundance of cedar trees in the Inside Passage in the south east of Alaska mean the tribes based in that region – the Tlingit, Haida, Eyak and Tsimshian – are credited for most of the state’s totem poles.

Nathan Jackson, an 82-year-old Tlingit also known as Yéil Yádi (Raven Child), carves totem poles from a shed in Saxman Totem Park. His craft has also been displayed in Washington DC’s Smithsonian National Museum of the American Indian, London’s Horniman Museum and Zurich’s North American Native Museum, and his work earned him a National Heritage Fellowship, the USA’s highest award in folk and traditional arts. He adds, ‘I use chainsaws, axes and scythe-like adz, but earlier ones were made from jade.’ 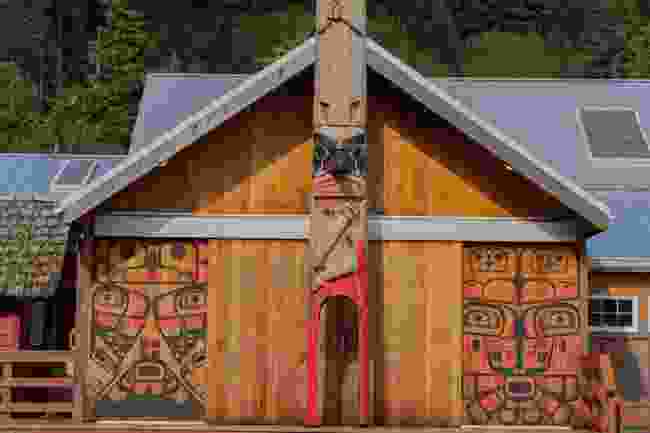 It’s a common misconception that totem poles are sacred. ‘The totem pole isn’t bowed down to,’ says Nathan.

Ken explains the main purposes of a pole. ‘A house post is already carved before a longhouse is built; they’re part of the construction. If you were from the Wolf clan and you wanted to stay with Wolf people, you’d arrive in a village by canoe and look for a house post with an elaborate carving of a wolf. Sometimes there wasn’t time to put in a house post, so later people would create a false house post which was decorative only, it wasn’t part of the structure.

‘A mortuary pole is a larger pole. It’s hollowed out so a box can slide into it. The remains of an upper status person, and perhaps some of their jewellery, were put inside the box. A memorial pole is in memory of someone; there are no ashes inside.

‘You also have ceremonial poles for special events such as marriages. A ridicule pole meanwhile would have been commissioned by a chief, perhaps because someone owed him a debt. In those days there were no lawyers to pursue your lost money, furs or fish, so debt was serious. If you caused the debt you’d have to attend a ceremony to be shamed in front of everyone – people would come from miles. You carried that ridicule till the pole fell to the ground. It could last generations.’ 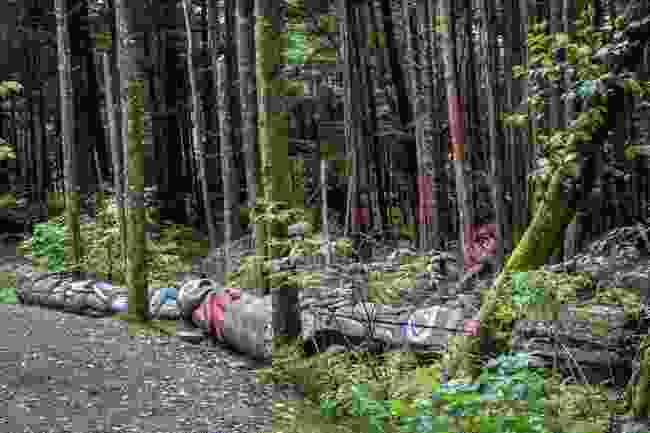 ‘Totem poles originate from the early 1700s,’ says Nathan. Alas, many of the oldest poles no longer exist.

‘Some go back so far they were transferred to different people,’ explains Ken. ‘And a lot fell over and decayed; they weren’t maintained, so people just forgot about them. If you got 100 years out of one that would be something.' 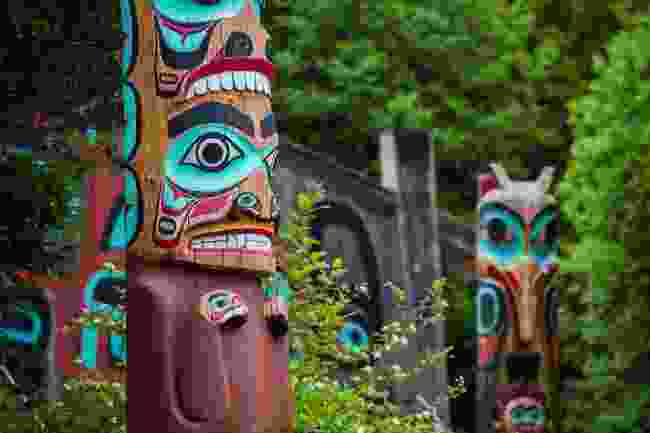 Some totem poles were not painted. Of the ones that were, they were traditionally painted with just a few colours. ‘The Haida people only used two colours, whereas the Tlingit used three,’ explains Nathan. ‘Blue came from copper – it was scraped from where copper bleeds out from rock – brick red came from volcanic ash and charcoal made black which was used to paint eyebrows, hair and beards.’

‘Totem pole carvers would pulverize charcoal with fish eggs to make an oil-based black paint to would bring out the eyes or feathers of a pole,’ explains Ken. ‘Barn-brown or red came from berries. You needed lots of berries for a 30ft pole; you couldn’t change the colour half way through – that would be like going to a hardware store and getting the wrong colour! When British sailors showed up [in the 1770s], they had blue tablets to rejuvenate their dungarees so blue was introduced to the Tlingit, Haida and Tsimshian world. To the native people, the blue tablets were like magic.’ 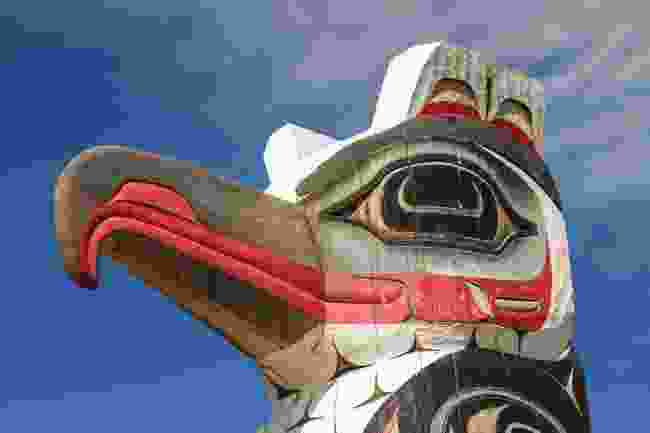 A carving of a bird (Shutterstock)

It was common for Tlingit, Haida, Eyak and Tsimshian to carve native wildlife, so many feature bears, wolves, eagles and ravens. Totem poles also depict mythical creatures, as well as plants such as berries.

6. A pole's meaning was explained in a ceremony 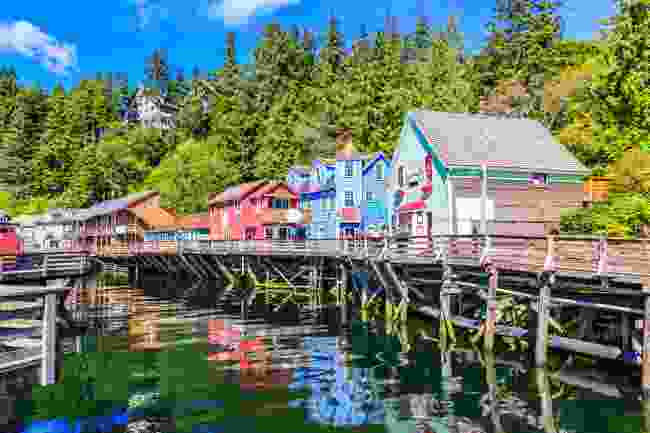 ‘The carver would know the story behind a pole and whoever commissioned it would know,’ says Ken. The meaning behind a ceremonial pole was explained in ‘pot latch’ ceremonies, during which the poles were raised to honour births or weddings. ‘The chief would organise accommodation and special food for his guests such as halibut and fish eggs,’ Ken adds. ‘The ceremonies would go on for days.’

‘Lots of people helped raise a pole with ropes in to a hole which was then filled with rocks and soil,’ adds Nathan. ‘They’d say “hey ho” as they pulled. After accomplishing the feat they’d sit around, chatting and feasting.

Once a pole had been raised, the story behind it was passed on orally through families. ‘A lot of our history is passed on by mouth; it’s not written down,’ explains Nathan. ‘Grandchildren would ask their grandpa “what does this represent?”. The youngest would be told the story of a pole and later on the grandfather would check what they remember.’

7. You can see totem poles in and around Ketchikan 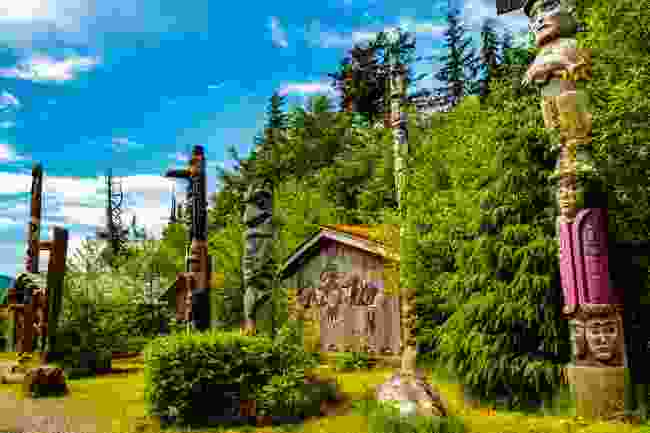 Visit Ketchikan to see restored totem poles outdoors among spruce and cedar trees at the 11-acre Totem Bight State Historical Park. You can also see new ones being made at the 40-acre reserve Alaska Rainforest Sanctuary. To see one of the world’s largest collections of unrestored 19th century totem poles, visit the town’s Totem Heritage Centre, which is home to poles taken from Tlingit and Haida villages from Tongass Island and Old Kasaan Island. You can also see restored totem poles outside at Saxman Totem Park, a Tlingit village established in 1894 near Ketchikan, where Nathan is based.

The Wanderlust guide to the best of Alaska