Obstinate animals, terrible flatulence and death-defying crossings; author Adrian Hall goes in search of musk ox in Greenland, in the world's largest fjord - and it doesn't go to plan

3 mins
Having been made redundant, English author Adrian Hall joined an expedition to Milne Land, a remote island in Greenland’s Scoresby Sund, the world’s largest fjord, to search for wildlife. Here, he recalls a doomed photo shoot with a musk ox...

Glancing up, I noticed I had fallen some distance behind the rest of the group and that they seemed to have started a game of hide and seek, all crouching just below the prow of the next ridge crest. I marched at double time up the slope to find out what was going on, complying with Jim’s “keep down” signal (a slow motion patting-a-dog-on-the-head action) as I approached.


To our annoyance, the musk ox has changed stance to present us with a stunning visage of his arse.

Throwing myself theatrically to the floor with rather more noise and ingestion of grit and local flora than intended, I inquired why we were cowering behind a rock. Jim informed me that a lone musk ox was grazing just the other side in a particularly photogenic fashion. I peeped over the top and, sure enough, there he stood in all his shaggy magnificence, seemly oblivious to our presence. And he was an absolute whopper. 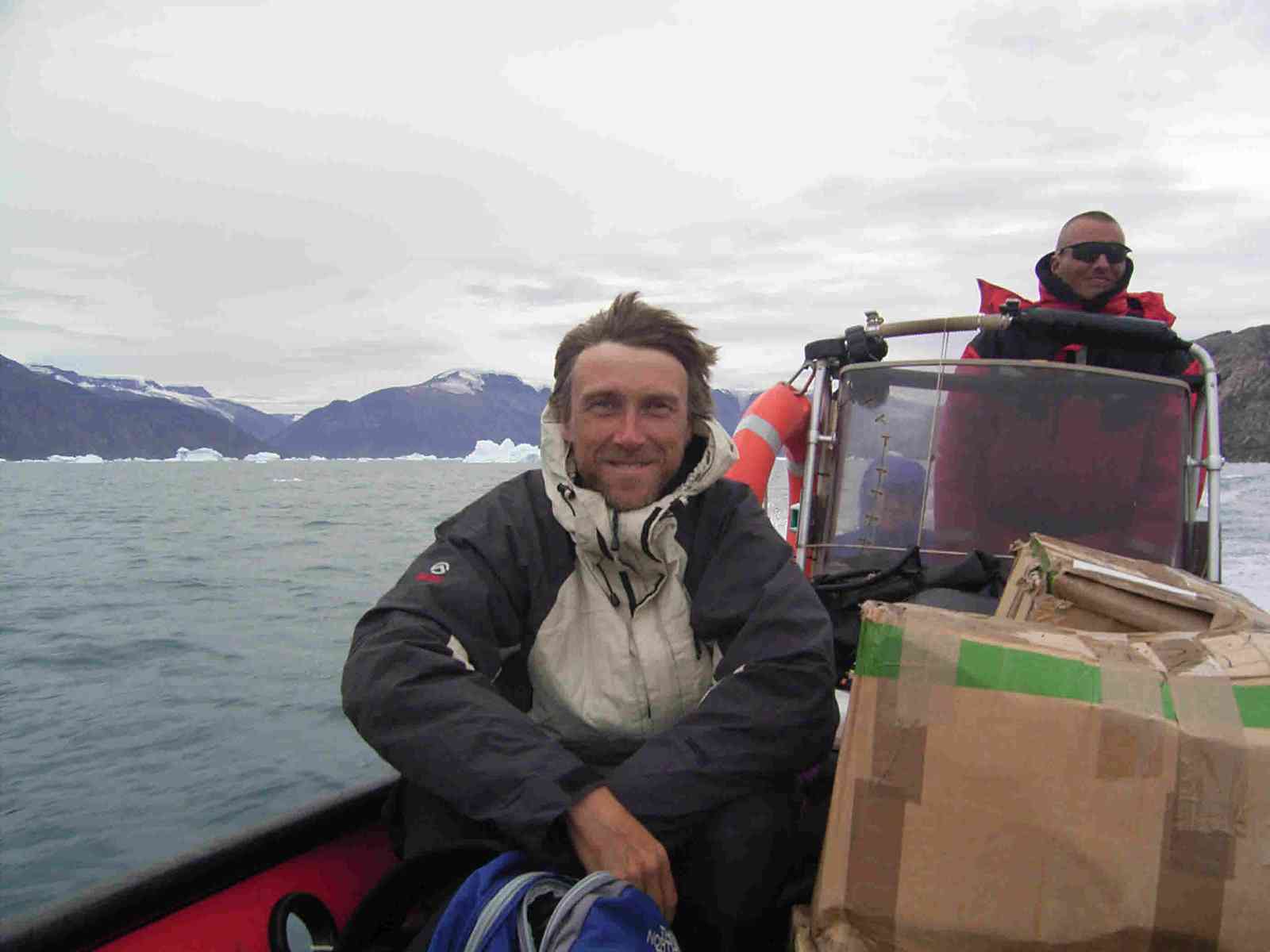 Cameras were hurriedly extracted from packs. When all were ready, in a scene that would not have been out of place in a Carry On film, five heads slowly popped up above the rock that had concealed our presence. To our annoyance, the musk ox has changed stance to present us with a stunning visage of his arse - not quite the National Geographic cover shot we were collectively hoping for.

We waited for him to turn back round - profile would be good, head on would be better - but he resolutely refused to budge, instead intent on wolfing down every miniscule leaf within munching distance of his woolly face.

Fidgeting had started to break out in the photographic ranks, bums were numbing and cramped, folded limbs needed to be extended. The level of noise emitted from our rocky hide was rising and, predictably, Shaggy finally got wind of our presence. He suddenly stood bolt upright and turned his head until first one and then two beady eyes were fixed on our position.

There seemed to be some delay in his decision-making process, ruminating on what course of action to take. After lengthy thought, his considered opinion, it turned out, was to bugger off sharpish; he galloped 100 feet or so up the slope whereupon he decided that that was quite enough exertion for the time being and resumed his grazing. 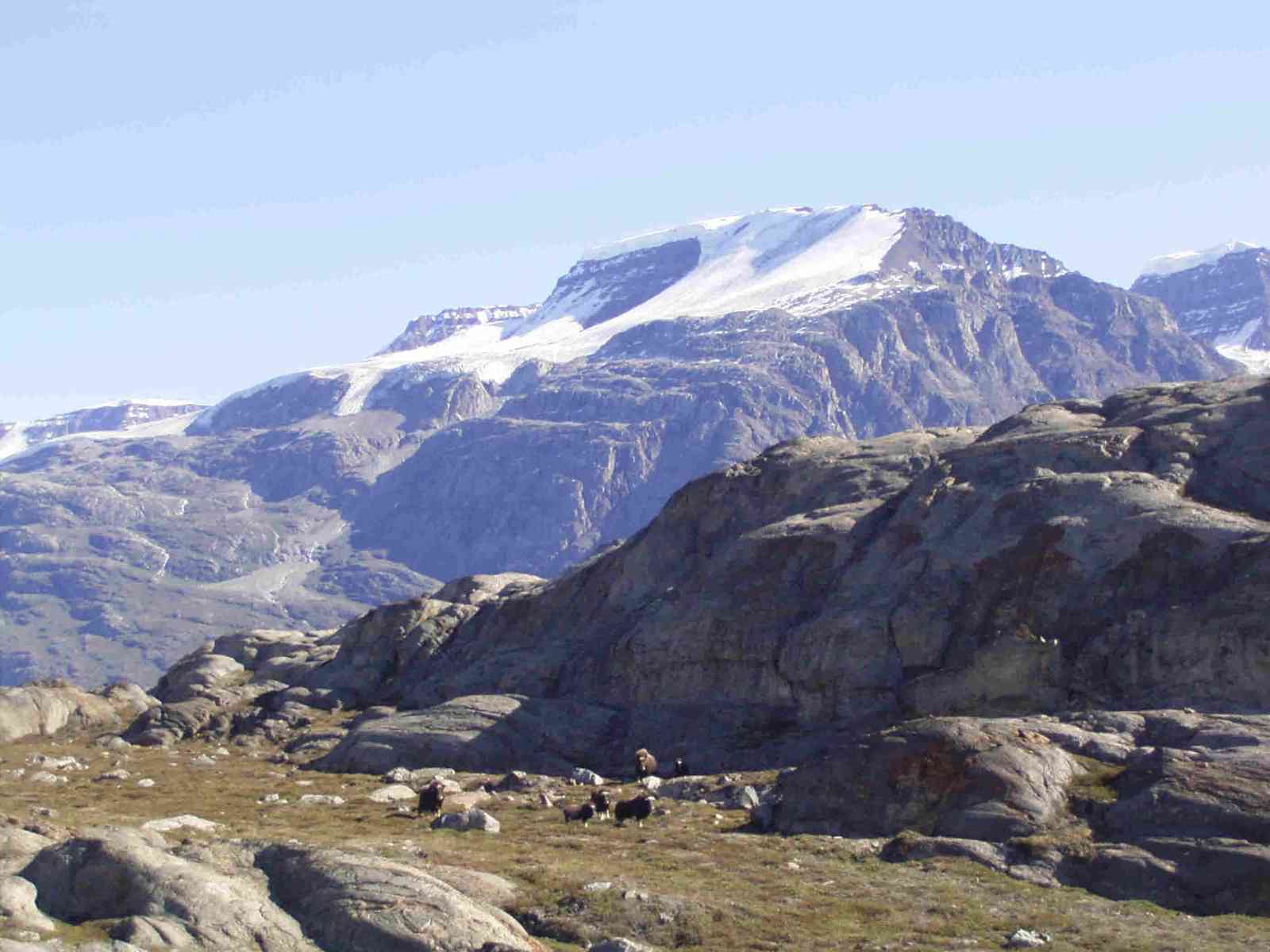 The big photo shoot hadn’t quite worked out as we had hoped. However, we were not to be beaten that easily. We decided that, as musk oxen were probably not the sharpest knives in the draw, if some of us remained visible in our current position the others could sneak up on Shaggy safe in the knowledge that he hadn’t carried out an accurate headcount of pesky irritators. The basis for this assumption was that, being a cloven-hoofed beast, his counting skills may be limited.

As Jim and Doug were keenest to get good pictures, they volunteered for the advance party, leaving Sandy, Tom and myself to mount an heroic rear-guard action - or, technically, sit in the sun eating sweets.

The hunter/photo-gatherers set off in a wide arc, using the ridge crest below us for cover, checking periodically that they had not strayed upwind of their quarry. They managed to creep within 20 feet and were laying, cameras poised, when Shaggy gave flight again. Signalling that the hunt had, however, been successful, they retraced their steps to re-join us.

Over further snacks, we speculated on the potential for bringing along the rifle next time to supplement our rehydrated dinners with prime rump of musk ox. Although our target practice from the first day would hardly have instilled the fear of God into the fauna of the area, Jim’s sternly disapproving looks did nothing to quell our meaty fantasies and, indeed, the topic of conversation switched to what musk ox might actually taste like. Beefy, lamby and even venisony were suggested.

To give added context to the debate, Doug retrieved a packet of beef jerky from his rucksack and offered its contents around. It was only later that night, in the cramped confines of my tent, when I learnt that the terrible price to pay for this much-welcomed source of protein was flatulence of terrifying ferocity.

My crazed desire for meat somewhat sated, we resumed our hike. Shaggy was still grazing a couple of hundred feet away, although unfortunately pretty much directly in our intended path. Jim cautioned us that lone bulls are unpredictable and that we should afford him a wide berth.

It is a general truism that musk ox prefer to move uphill away from any perceived threat or danger. To give Shaggy first dibs at the moral and physical high ground, we adjusted our course to keep slightly down-slope from his current position. At first, he disdainfully ignored our presence, refusing to even look in our direction, with the air of a car driver refusing to acknowledge the presence of a fellow road user wishing to join the stream of traffic.

But musk oxen, like us, do not relish the invasion of their personal space. At a distance of about 50 feet, Shaggy decided that his line in the sand had been crossed and off he lolloped. So it continued, our merry band following an alternatingly miffed and munching musk ox in a gentle traverse of the slope. 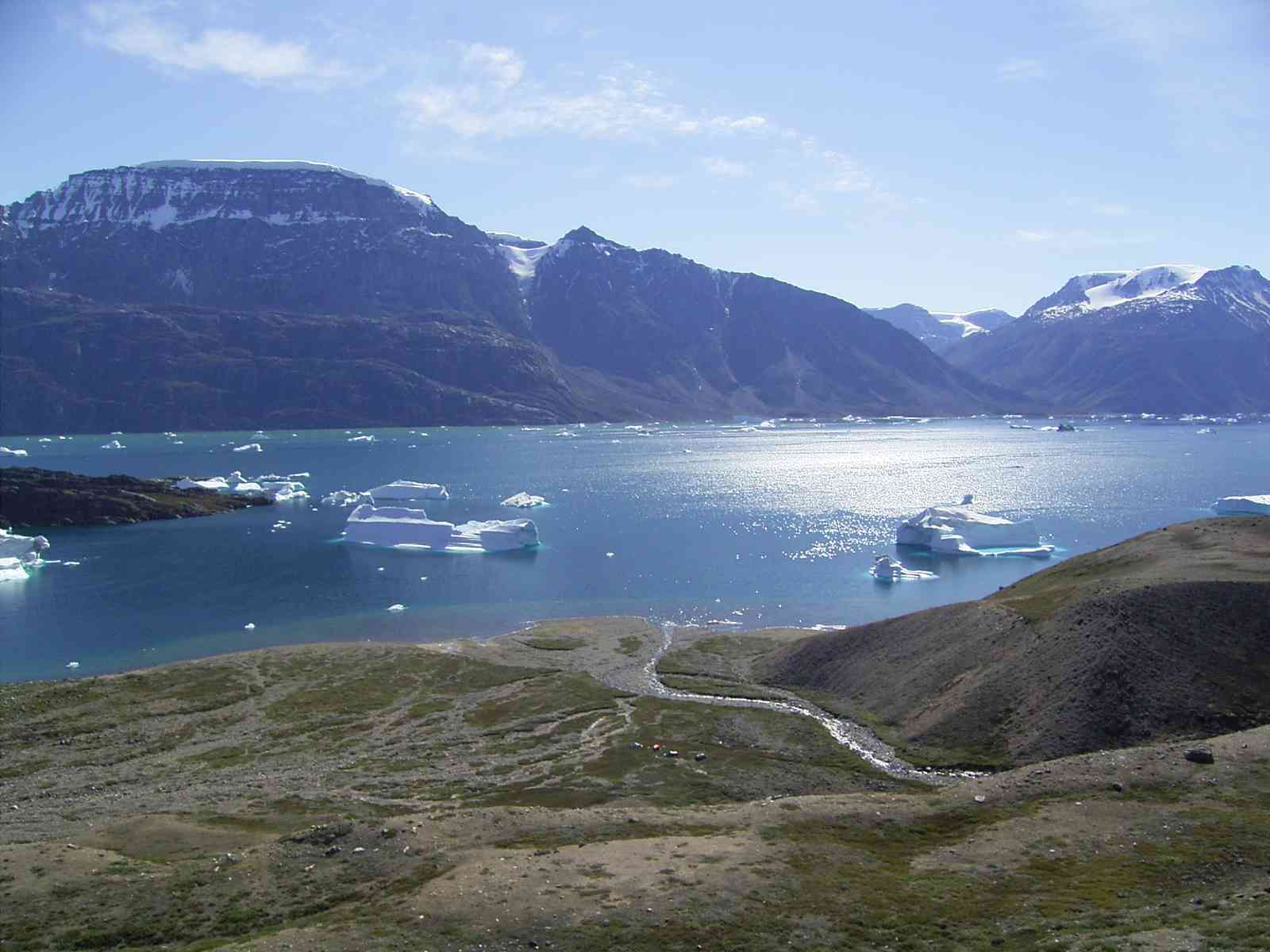 Eventually, even obstinate Shaggy realised that he would run out of slope sooner or later, and could either stand his ground or, in a decidedly pragmatic move for his species, let caution be the better part of valour and switch his direction of retreat to downhill. We stood and watched him go, finally finding a suitable spot at which to resume feeding in a picturesque mini-amphitheatre, neat rows of rocks surrounding a lush green stage.

As we continued to walk parallel to the coast, the slope began to steepen noticeably. Within minutes, we had reverted back to the tried and tested ‘old chestnut’ of following a musk ox path. This worked admirably until we rounded a spur and the path abruptly vanished. On reflection, perhaps the term vanished is not entirely correct. More accurately put, the dusty track miraculously changed into a solid rocky ledge of worryingly narrow width. What was all the more alarming was the fact that the green slope had been replaced by a bloody great cliff with a sheer drop-off, I would estimate, about 300 feet straight down into the fjord.

Looking up, the brown rock wall continued for some considerable distance. We stood in silence and looked at the ledge, at each other, and back at the ledge. Jim, an experienced mountaineer, made a detailed examination and assured us that the ledge was perfectly safe, suggesting that he cross first. He was probably cheered by the fact that no one tried to oust him from his position at the front of the queue.

At about four feet in length and perhaps a foot in width, the ledge presented no barrier to Jim. One assured step on and one even more confident step off made it look all too easy. Once on the gentler slope on the other side, he removed his pack and took up a position to aid our crossing. On the list of ‘things I find scary’, a morbid fear of plunging to certain death from a great height ranks in a fairly lofty position. That said, I certainly had no intention of revealing my barely suppressed qualms, and when Jim asked who was next, I stepped forward.

I looked down at the waves breaking at the cliff’s base far below, looked at the Ledge of Death, and looked across at Jim, who was doing his level best to look reassuring. With a final thought of never seeing my family again or Norwich City lifting the FA Cup, I took a deep breath and put one foot on the ledge. Slightly gladdened by the fact that it didn’t crumble beneath me, the other foot was brought over to join the party.

I was now standing - perhaps cowering would be closer to the truth - in a position that would have had an Acapulco cliff diver soiling his Speedos. Looking around me, I spotted a stout-looking length of gnarled root that I grabbed hold of. A gentle tug suggested it was attached somewhere to something. I looked down, unfortunately, between my feet, to the hundreds of feet of nothingness between me and an indefinite spell in Davy Jones locker.

“Christ. Get a grip,” I admonished myself with as much resolve as I could muster. Reaching out, I grasped Jim’s proffered hand and took a further step to join him on the far side.

Once safely across, I took a seat to watch the others and re-stiffened my upper lip that was probably showing the odd tremble. Sandy was next to cross, then Tom and finally Doug. Each followed the same set of steps pioneered by Jim. Each one mouthed oaths mid-ledge, admittedly some with more creative use of profanities than others. And each vowed that we would certainly not be taking this route on the return journey back to camp.