A long weekend in Essaouira, Morocco

Sea breezes, super souks, sand, the smell of fresh-grilled fish – there are so many reasons to pick Essaouira for your next long weekend.

Essaouira (‘essa-weera’), a port on the Atlantic coast between Agadir and Casablanca, 160km west of Marrakech, is Morocco at its most relaxed. It’s long been a cultural mix of Arabs, Berbers, Jews, Africans and Europeans, and it’s attracting ever-increasing numbers of visitors.

People are drawn by Essaouira’s 18th-century UNESCO-listed, rampart-encircled medina; by its whitewashed, blue-shuttered houses; by its thuya wood workshops and art galleries; by its postcard-pretty harbour and enormous swathes of golden sand. Also, the omnipresent gusts of wind, known locally as the alizee, create the perfect waves for windsurfing and kitesurfing. 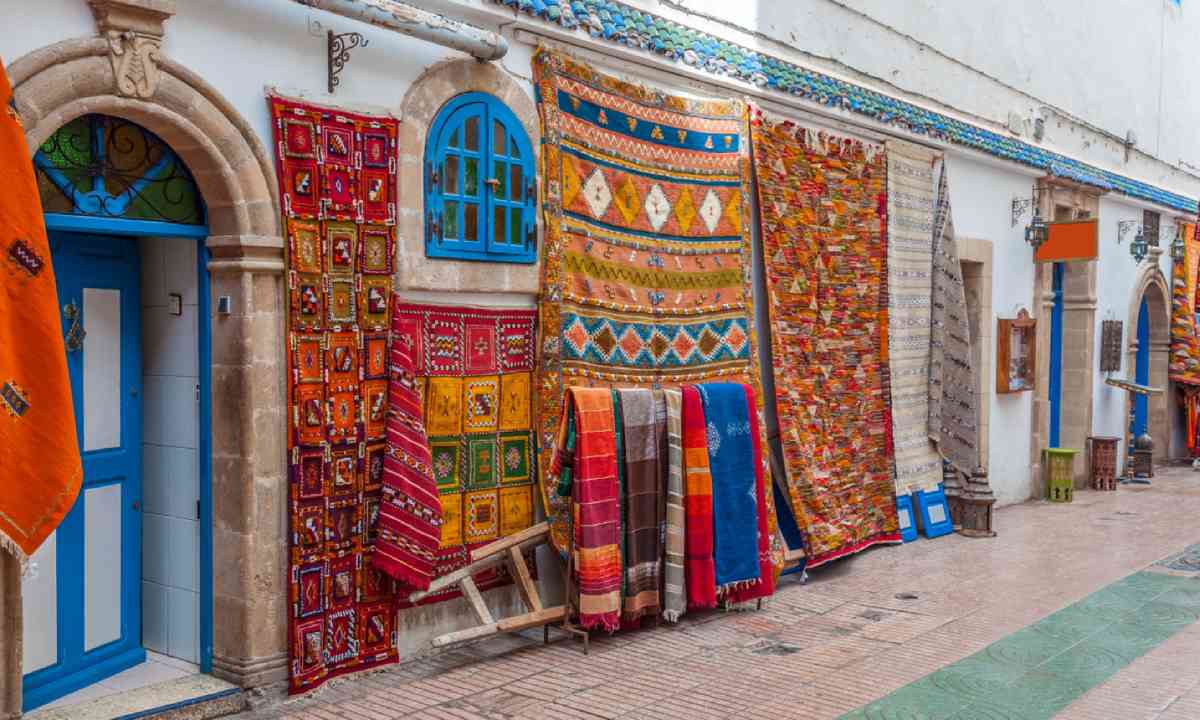 Travellers to the city are nothing new. The Phoenicians set up an outpost here in the seventh century BC and Romans used the purple dye extracted from the bay’s mollusks on their imperial togas. The Portuguese – who knew it as Mogador – used Essaouira as a trading base for gold, spices and slaves, and built fortifications to protect it from marauding buccaneers. The spice trade lives on in the ancient souk; the mesmerising gnaoua rhythm you hear around the medina was created by the descendants of African slaves.

During the 19th century, Essaouira was the only Moroccan port south of Tangier that was open to European trade, which attracted British and Jewish merchants. The city’s fortunes declined during the years of the French Protectorate, when the port was moved to Casablanca, and further still after independence in 1956 with the exodus of the Jewish community.

Still, Essaouira attracted celebrity visitors. Churchill loved the light; Orson Welles filmed part of Othello on the ramparts. Cat Stevens and Frank Zappa strummed their guitars around a beach bonfire here, and locals remain convinced that Jimi Hendrix’s Castles Made of Sand was inspired by the ruins of the Borj El-Berod watchtower – even though he wrote the song before his visit.

There’s a thriving arts scene, and the colourful works of the naïve school of painting are world renowned. Music lives on in festivals: classical Les Alizés (April); the gypsy and flamenco-based Festival of the Atlantic Andalusias (October); the exuberant Gnaoua Festival (May), during which many of the concerts are free.

In fact many of the city’s charms are free: dip into an alcove in the fortifications and gaze across the ocean or stroll down to the harbour to watch the boat builders and fisherman in action. It has been a working port far longer than it’s been a hangout for artists and surfers, and its souks are still as much for locals as for tourists. It’s too windy to turn into Agadir; it could become a Moroccan St Tropez. But for now it’s still Essaouira.

When to go: Year-round, although spring and autumn are best for warm weather and fewer people. The weather is often at its best in September, when the winds are lighter and the sea is calm and still warm. Accommodation can be scarce during the popular Gnaoua World Music Festival.

Getting there: Essaouira is approximately three hours from Marrakech by bus; less by car or taxi. There is an international airport just outside the city. 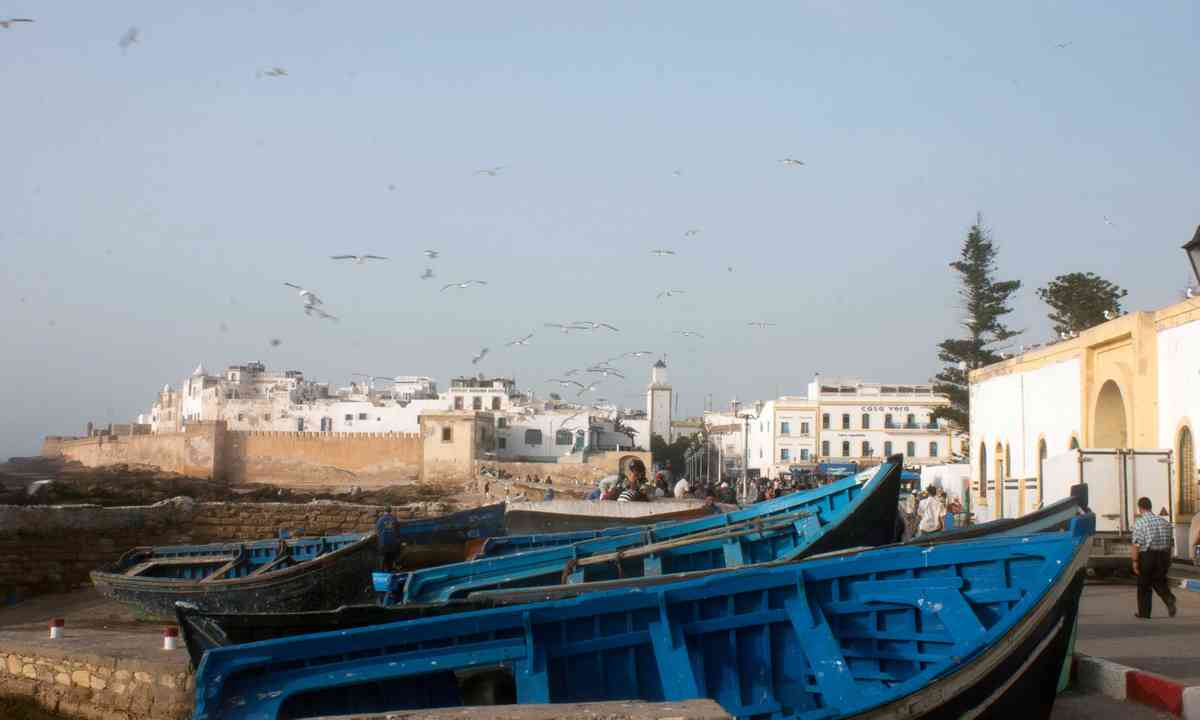 Getting around: The city centre is compact and walkable. The easiest way to explore the region is by bus, grand taxi or guided tour. You can also hire bikes.

Where to stay: Splurge at the sumptuous L’Heure Bleue, with its rooftop pool, hammam and private cinema. Dar les Sirènes is a riad turned chic B&B. If you want to rent your own riad, contact Castles in the Sand.

Where to eat: Essaouira has no shortage of eateries. Try Elizir (1 Derb Agadir Medina) and the Taros Café, which has a boutique, gallery and library, as well as a rooftop bar.

Day one: Meet the Medina

Start in the medina at Place Moulay Hassan. Head north up Rue de la Skala to the Skala de la Ville, where you can walk atop the ramparts.

To the south of the square is the picturesque port, where wooden boats bob and leathery fisherman mend their nets. Between the port and square are grillades de poissons, wooden shacks where fresh fish is grilled in front of you and served with bread and salad – ideal for lunch. If it’s not too windy, head to the beach to see an entertaining mix of tourists, locals, hawkers, camel drivers and football matches. Take a boat trip to Mogador Island nature reserve, home to abundant birdlife, including Eleonora’s falcon.

Return to the medina to explore the souks at the junction of avenues Mohammed Zerktouni and Mohammed El-Quouri, picking up an ice cream at Dolce Freddo (Place Moulay Hassan) en route. Shop for thuya wood, co-operative argan oil, raffia sandals and silver jewellery. Check out the local art at Galerie Damgaard before heading back to the ramparts for a sunset stroll and a sundowner at the rooftop bar of Taros Café. 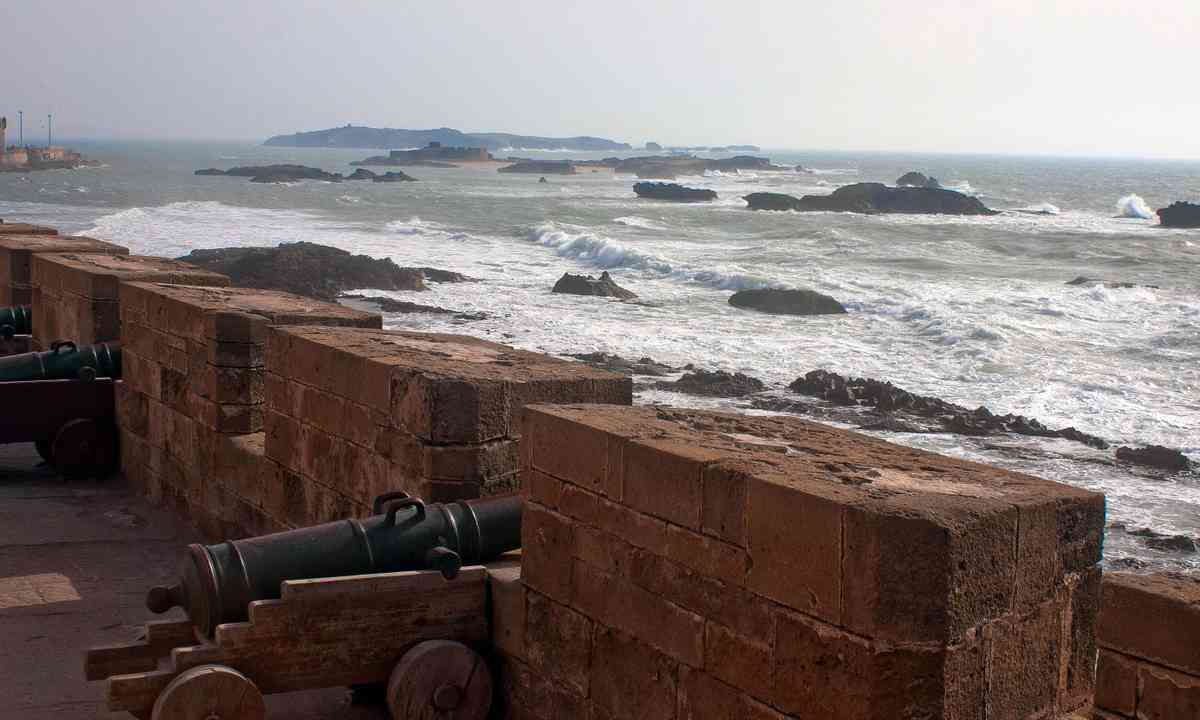 View from the fort in Essaouira (Simon Chubb)

Take a Moroccan cooking workshop with Chef Mouna at l’Atelier Madada. Learn to rustle up some classic Moroccan dishes from what’s available in the market that morning; perhaps zaalouk, a smoked aubergine dip, and lamb or chicken tagine. Or take the Oriental pastry workshop to learn the difference between local sweet treats such as msemen and baghrir.

Morocco has a long history of wine-making so continue the foodie theme at diminutive Les Domaines du Val d’Argan, 20km from Essaouira. It is the only vineyard in the south and produces around 120,000 bottles a year. After a walk through the fields, eat at the restaurant, which has wonderful views over the countryside. The vineyard also sells organic olive oil and argan, the Moroccan super-oil.

Alternatively, head back to the beach to have a go at windsurfing and kitesurfing (April-October) or, in the winter months, surfing. Explora offers lessons for all levels or you can hire the gear. Lesson times depend on the winds.

Take a taxi to Diabat, a sleepy village just south of Essaouira (though some big resorts are being built). Here, Equi Evasion runs horse and camel trips, from one-hour rides along the beach – home to the ruined Borj El-Berod watchtower – to week-long treks. Legend has it that Jimi Hendrix holed up here with some hippies for a few weeks in 1969 – Café Hendrix has newspaper cuttings that swear to it.

If you feel the need for more action, you can quadbike along the great swathes of beach around Essaouira, go dune jumping and explore local villages. Explora offers quadbiking; there are full-day excursions, stopping off for a picnic lunch, for more experienced quadbikers. You can also rent a bike and cycle south to the laidback beach town of Sidi Kaouki, popular with hardcore surfers.

If you’d rather stretch your legs, take a guided walk from Essaouira. Ecotourisme et Randonnées offers half- and full-day hikes; these follow narrow trails through villages and argan-nut farms or fishing communities, dunes and deserted beaches, teaching about local life, flora and fauna en route.