Lunar like a local: Your guide to the best Chinese New Year traditions

We unravel a lucky eight of the best Chinese traditions so you can celebrate the Lunar New Year like a local. Colourful, touching and intriguing, these traditions are the key to an unforgettable experience 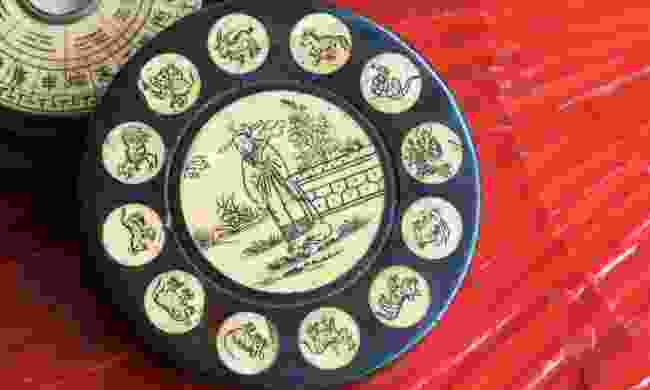 According to Chinese mythology, the order of the animals of the zodiac, and the corresponding names for the years, were decided by a swimming race across a fast flowing river. The devious rat secured victory by hitching a ride with the ox and leaping from the animal's back to reach the other side first. Shortly behind the ox came the tiger, while the pig finished last.

The horse came a respectable seventh, robbed of sixth place by the snake which sprang from its fetlock inches from the finish line. Spare a thought for the cat, pushed into the water by the rat and left to drown; it failed to earn a place in the Chinese calendar. Cats and rats have been enemies ever since. 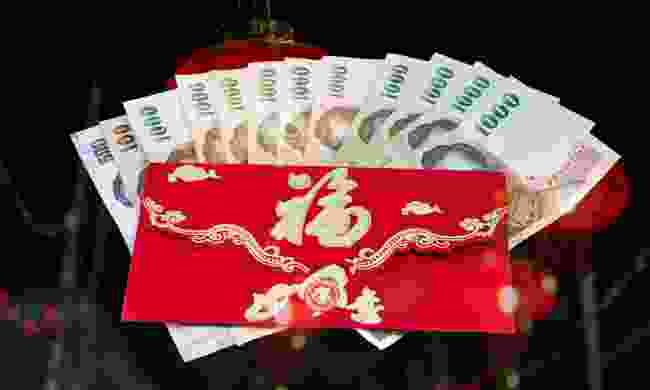 With its associations of joy and good fortune, the colour red is of special significance to the Chinese. Red paper envelopes containing gifts of money are traditionally given to children at New Year and during the 15-day Spring Festival that follows. Like the drums and the sulphurous firecrackers which contribute to so many New Year celebrations, red is also believed to frighten away wrathful demons.

According to  Chinese mythology, a fearsome, sea-dwelling monster named Nian, who terrorised the villages of China at the beginning of each year, turned tail and fled at the sight of an elderly man in a red robe, never to return. Often trimmed with gold, it is the colour of choice for the elegant lanterns and cut-paper decorations that bring a flush of colour to Chinatowns around the globe. 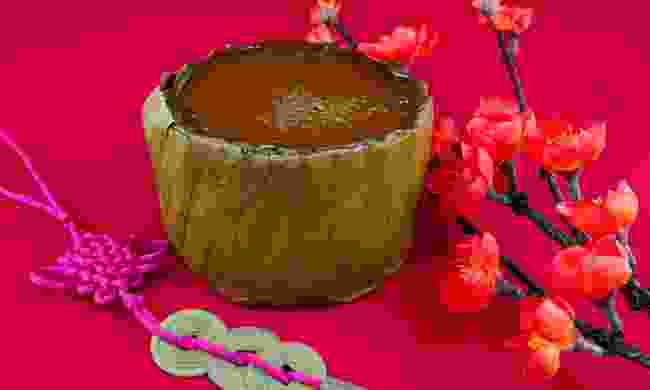 While many, more traditional, communities choose to abstain from eating meat and other rich foods in the days leading up to festival, New Year itself is a time for feasting. Whole fish are often served, the head and tale symbolising a good start and end to the coming year, while slender noodles represent long life. In southern China, families make lucky niangao, a New Year cake made from sticky-sweet rice flavoured with coconut milk.

In the North, it's traditional to make delicately-crimped dumplings (jiaozi). Shaped like the silver and gold ingots used as currency under the Ming dynasty, they are believed to bring prosperity. Many other dishes and ingredients are deemed auspicious because of their names. The Cantonese word for lettuce is close to that for 'rising fortune' and crisp lettuce leaves are often used to wrap pieces of stir-fried chicken and succulent prawns.

4. Of gods and ancestors 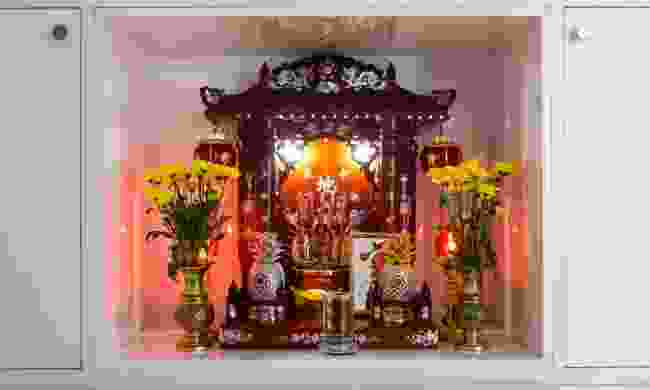 Every New Year, Buddhists and followers of Taoism ensure that their sacred statues and household altars are scrupulously polished and freshly decorated. Many burn paper effigies of figures like Zao Jun, god of the kitchen, who is believed to act as a messenger to the heavenly kingdom, reporting on the family's activities. These ethereal beings are often bribed with libations and offerings of sweets to ensure that their reports are complimentary!

The Spring Festival, is also a time for visiting relatives and for offering prayers on behalf of ancestors, accompanied by the lighting of fragrant joss sticks. 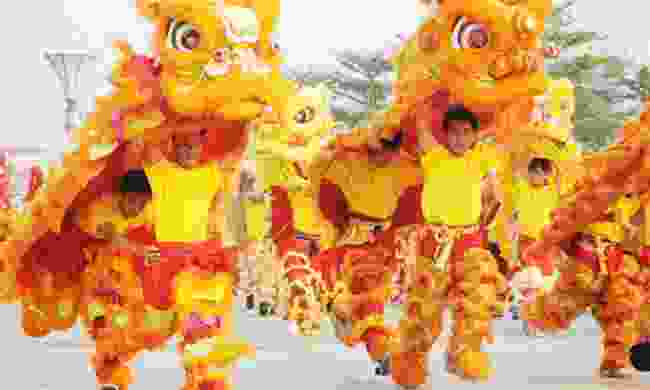 The origins of New Year lion dances and of the curious horned lions themselves, are shrouded in the mists of Chinese legend. Not be confused with the benevolent dragons that provide the climax to New Year processions, held aloft on poles and operated by  long chains of people, lions are operated by a pair of dancers, often martial artists. They are believed to chase off evil spirits and to bring good fortune to the community.

Lucky lettuces, accompanied by gifts of money, are traditionally hung for the lions, which perform feats of acrobatics to pluck them from the lintels of shops and houses, showering onlookers with a flurry of torn leaves. 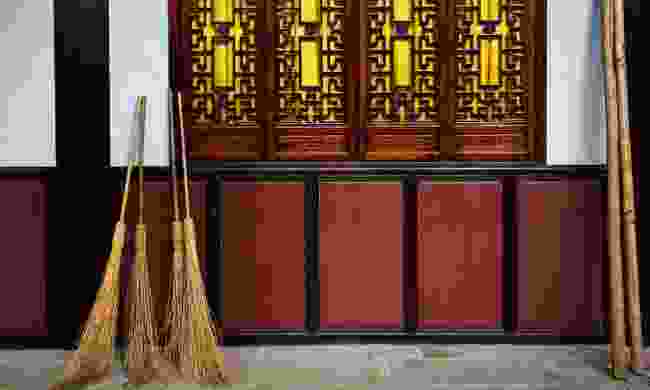 In the hope of sweeping away misfortune and inviting in luck, it is customary for Chinese families to give their homes a thorough clean in the run up to the annual festivities. On New Year's day itself, dust pans are locked away so fresh luck can't be brushed from the house.

The festival is also a time for settling debts and returning favours, with many Chinese sending presents to colleagues and associates. Buying new clothes is symbolic of a fresh start, but be wary of booking any New Year hair appointments. Cutting your hair at New Year is the route to misfortune, 'hair' being a close homophone for ‘prosperity’. 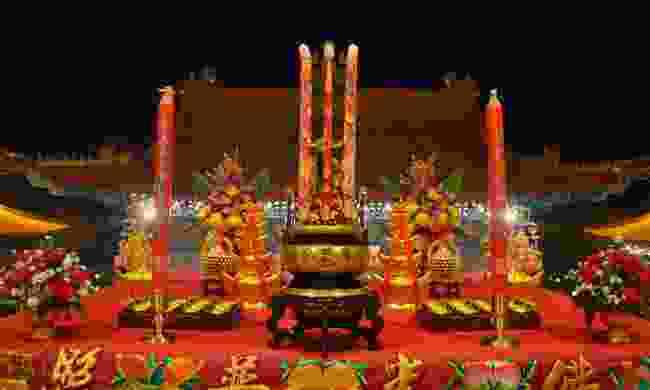 Offering to the Jade Emperor (Dreamstime)

Of particular significance to Hokkien Chinese, the eighth and ninth days of the Spring Festival are devoted to celebrating the birth of the Jade Emperor, the ruler of heaven. Families take part in ritual prayer and make offerings of food and incense, while business owners traditionally invite their employees to dinner.  In many Hokkien communities, worshippers burn mounds of gold paper and offer gifts of sugar-cane.

According to legend, the Hokkien people avoided extermination  at the hands of an invading army by hiding out in sugarcane plantation. They emerged on the Emperor's birthday and resolved to thank him every year for ensuring their preservation. 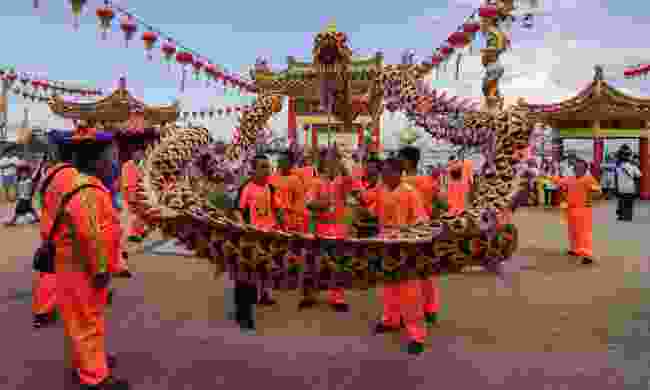 On the 15th, and final, day of the Spring Festival, the young women of Penang on the Northwest coast of Malaysia, partake in one of the more bizarre New Year traditions. Thousands of people turn out on the city's waterfront and watch as the maidens throw oranges into the sea in the hope that it will secure them a husband. Symbolic of abundant happiness, oranges and tangerines are popular gifts at this time of year.

Other Chinese communities mark the end of the festivities by making elaborate paper lanterns which symbolise letting go of the past and embracing the year to come.