A foodie break in Athens, Greece

Europe’s most controversial capital has more on its plate than economics. For a flavour of this classical city, embark on a food tour...

Crisis, what crisis? Walking the beguiling streets of Plaka, the oldest neighbourhood of Athens, one sees bustling cafes and restaurants, crowds of eager tourists perusing the menus. But, even here, close to the remains of the Roman Agora market, the occasional building sits empty and graffiti, much of it politically inspired, covers many walls.

Out away from the tourist zone, there are more signs of empty buildings. “There were banks here... but they have gone,” said my guide on a walking tour. “But streets die when they are full of banks – now people are here for shops and cafes.” Look around and you see – superficially at least – a vibrant city.

Athenians are determined to enjoy themselves, some defiantly smoking in bars, despite the ban. Athens is rich in culture, the cradle of democracy. We all know that, but it is still a pleasant surprise to see the constant reminders of its glorious past, whether glass in pavements, looking down on ancient remains, or turning a corner to see another glorious ruin. But Greece has a rich food heritage too and that is more relevant than ever. 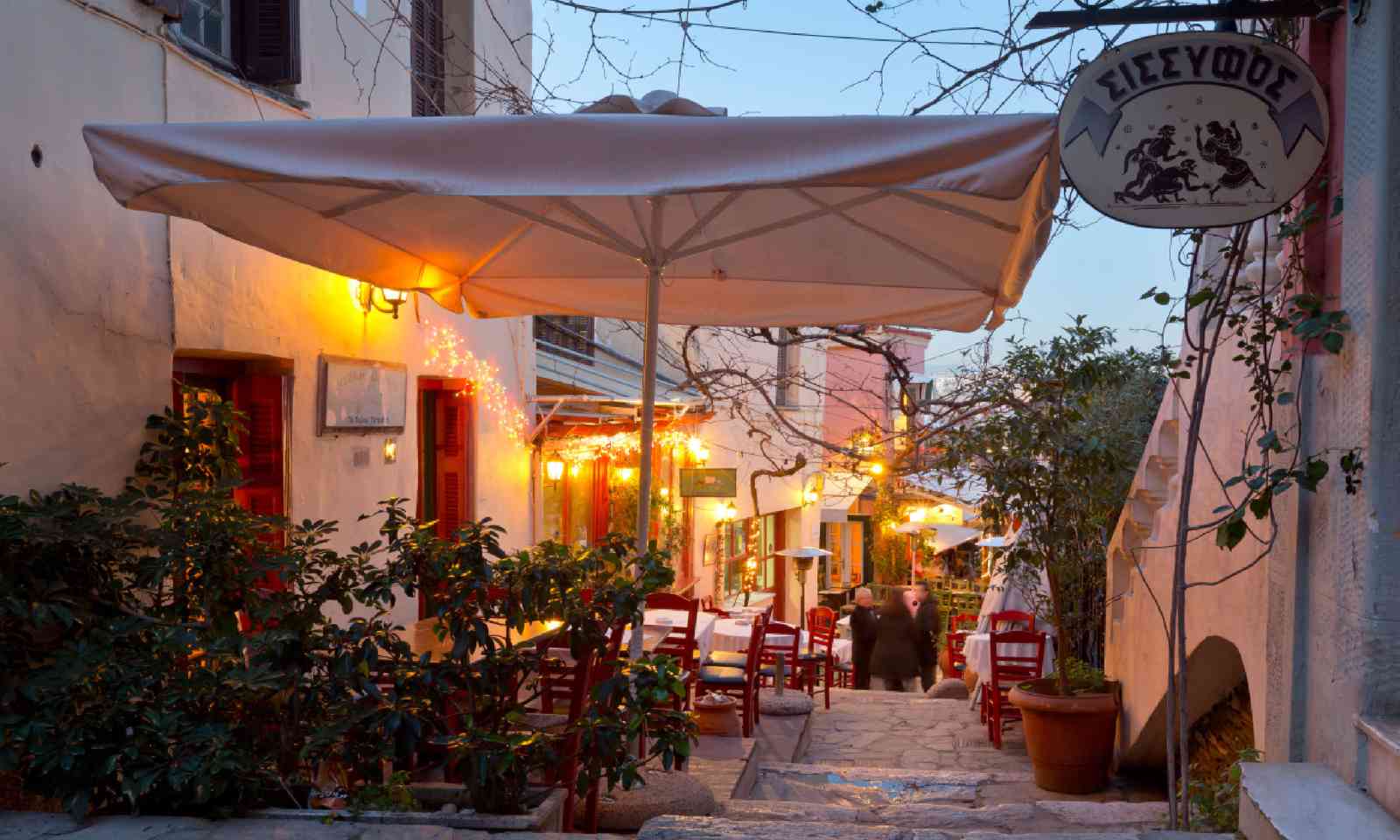 In much of Western Europe and the USA there’s a swing back to seasonal and fresh produce, but that’s a philosophy that has never gone out of fashion in Greece. So yes, the famous fastfood chains do exist, but they are a relatively rare species. What’s more, there is a now bit of a gastro revolution too with chefs innovating and giving the traditional dishes a contemporary twist.

As many a Greek will tell you, “The most important ingredient is good company!” But if you are on your own, you’ll still relish the care taken over food. With Athens home to people from all over Greece, you will often find food from other regions, as well as recipes from migrant groups (such as pastourma, salted air-cured meat, introduced by the Armenians).

Breakfast is simple, and many Athenians may just have koulouri, a ring of chewy bread coated with sesame seeds. Greeks eat more olive oil per capita than any other country in the world, and every table will have it on. Starters (mezedes) are meant to be shared, so will normally be placed in the middle of the table. Vegetarians can eat well from meze dishes alone.

The most common cheese is feta but look out for others; touloumotyri is a sheep or goat’s cheese, stored in an animal skin. Saganaki is pan-seared cheese named after the pan it is cooked in. Lamb is the most common meat, with goat, beef and pork found too. Expect a large range of fish including squid and octopus.

If trying a traditional Greek coffee, note that it is ordered by level of sweetness – sketo (no sugar); metrio (a little sugar); glyko (very sweet). 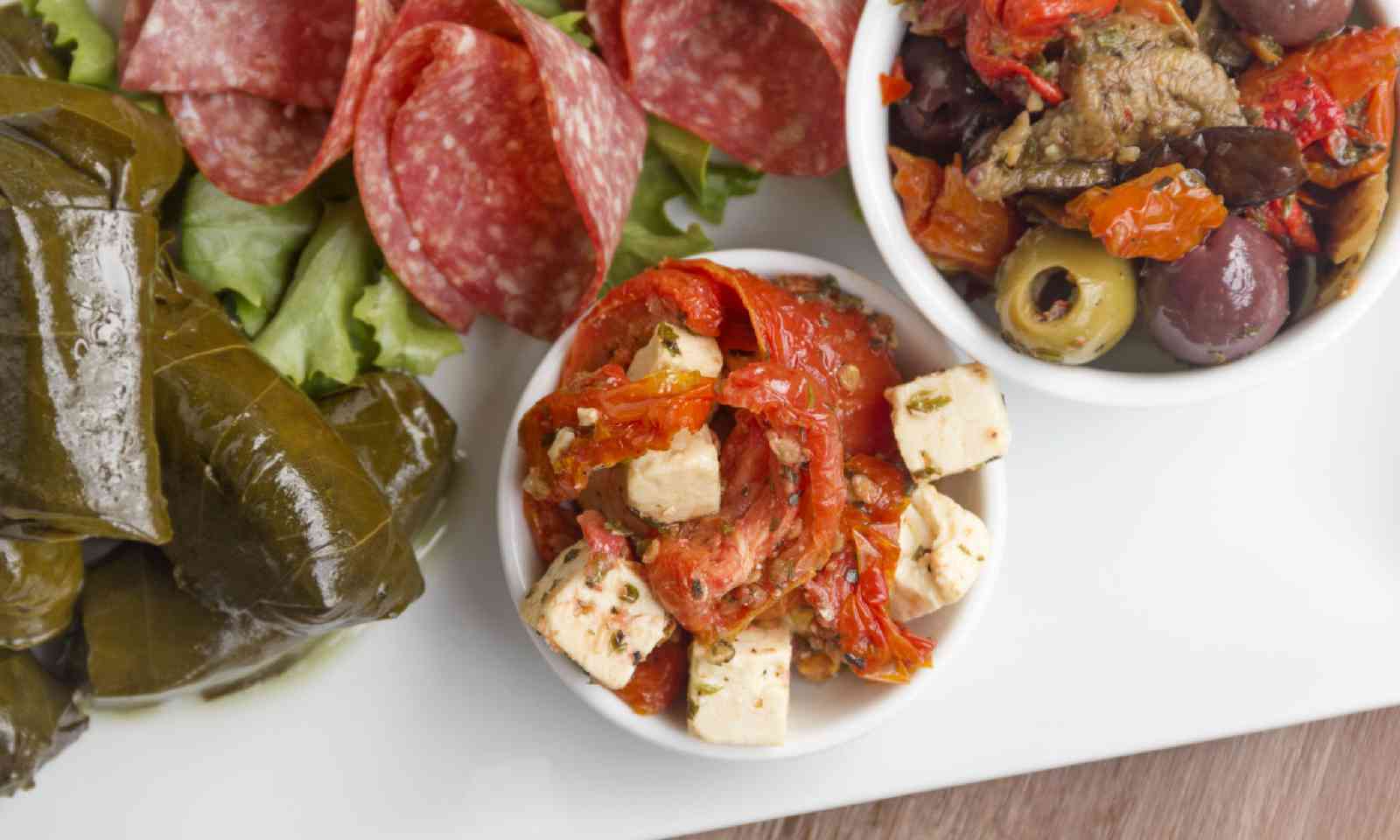 Where to stay: Hera Hotel is in Makrygianni, well situated close to the Acropolis. Some rooms have Acropolis views, as does the terrace bar and restaurant. Doubles from €130 (£93) B&B. AVA Hotel, luxurious boutique hotel in Plaka; all executive suites come with Acropolis view. Doubles from €185 (£132). City Circus eclectic ‘boutique hostel’ in the Psirri district, offers everything from 8-bed mixed dorms, to deluxe private rooms. En suite doubles from €60 (£42).

Where to eat: Mani Mani (down the road from Hera Hotel) Regional produce from Mani in the Peloponnese is used in innovative ways. Tzitzikas kai Mermigas (‘Cricket and the Ant’) has two locations, one of them just a block from Syntagma Square – popular and non-touristy modern Greek taverna. Acropolis Museum: On Friday nights the popular museum cafe stays open until midnight, offering a gourmet experience with views of the floodlit Acropolis. Service can be disengaged, but the food is good and the view magical.

The Acropolis dominates the Athens skyline – get there as early as possible (8am! Breakfast on a koulouri en route) to visit the Parthenon, before the coach parties descend. From here, take a stroll along the pedestrianised Dionysiou Areopagitou, and visit the sites on the southern slopes of the Acropolis (separate ticket required) and the Agora, the ancient marketplace and meeting point of the city.

After all that culture, find a leisurely bite to eat in the Plaka; the picturesque area might be very touristy but in a good way. The terrace of Xenios Zeus makes a good lunch spot, with its large menu of authentic Greek specialities. Or on popular Mnisikleous, a stepped street of cheek by jowl restaurants, seek out cosy Yiasemi Cafe.

Refreshed, head to the new Acropolis Museum (€5 [£3]), home to the artefacts found on the Acropolis. If visiting on a Friday night, the restaurant at the museum is open until midnight, and offers one of the world’s best views. Otherwise, head to one of the rooftop bars or restaurants of the Thissio neighbourhood, many of which have good views too. 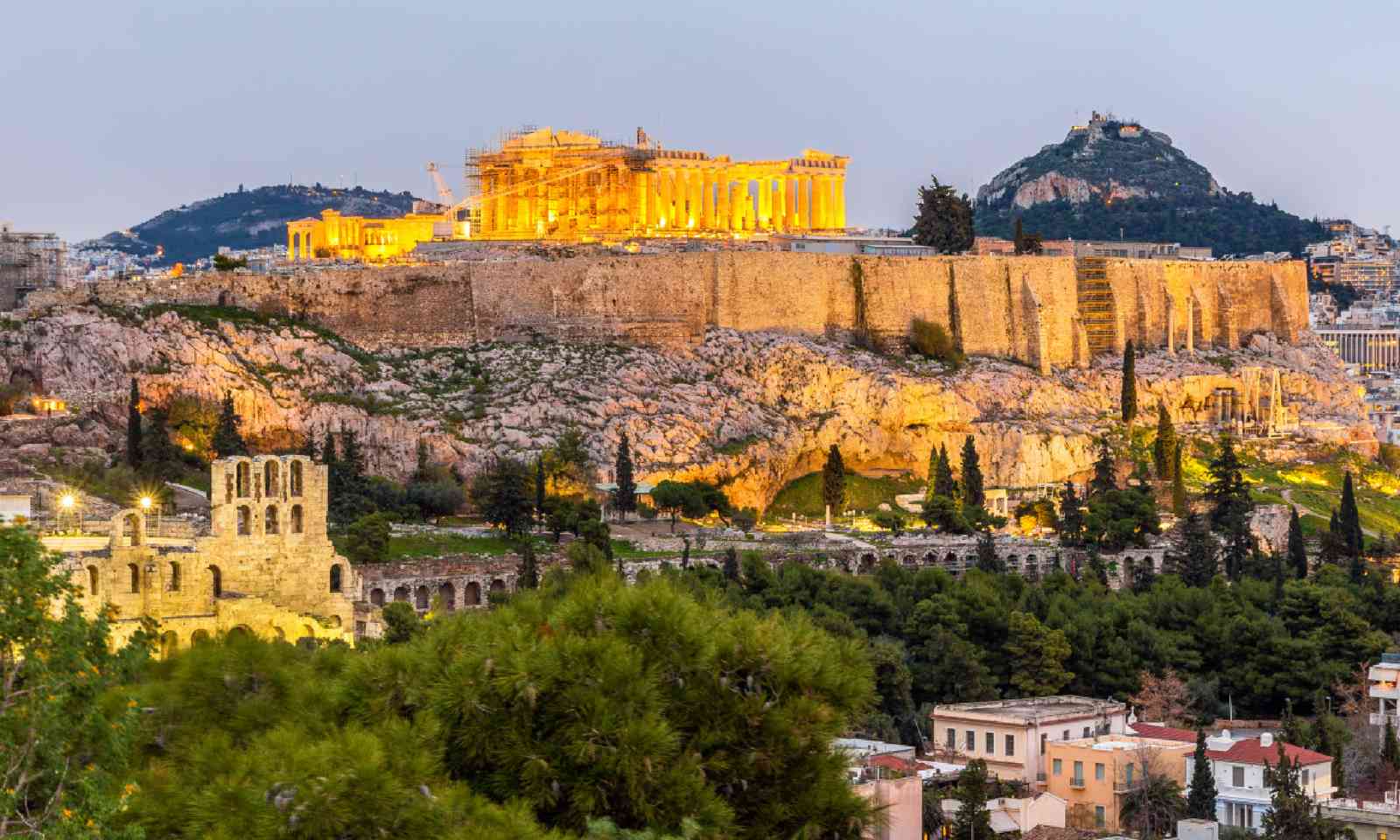 Join a Taste of Athens tour from Urban Adventures. This half-day walking tour visits independent delis and shops, as well as the Central market for meats and fish.

You may well finish off with lunch at Diporto, a simple cellar taverna with no printed menu, and barrels of its own retsina wine. But if you have a sweet tooth (and the space in your tummy to fit it), then head into Krinos on Aiolou Street for loukoumades – Greek doughnuts.

You won’t be far from the Museum of Gastronomy, with a restaurant menu that complements the changing exhibitions. Burn off some calories by walking to any of the sites you missed yesterday, eg the Areopagus, ‘The Hill of Ares’, once the site of the Council of Nobles, and also famous as the site of one of St Paul’s most important sermons. Dinner in style at one of the city’s new wave restaurants, such as Aleria, Mani Mani or Cookoovaya. 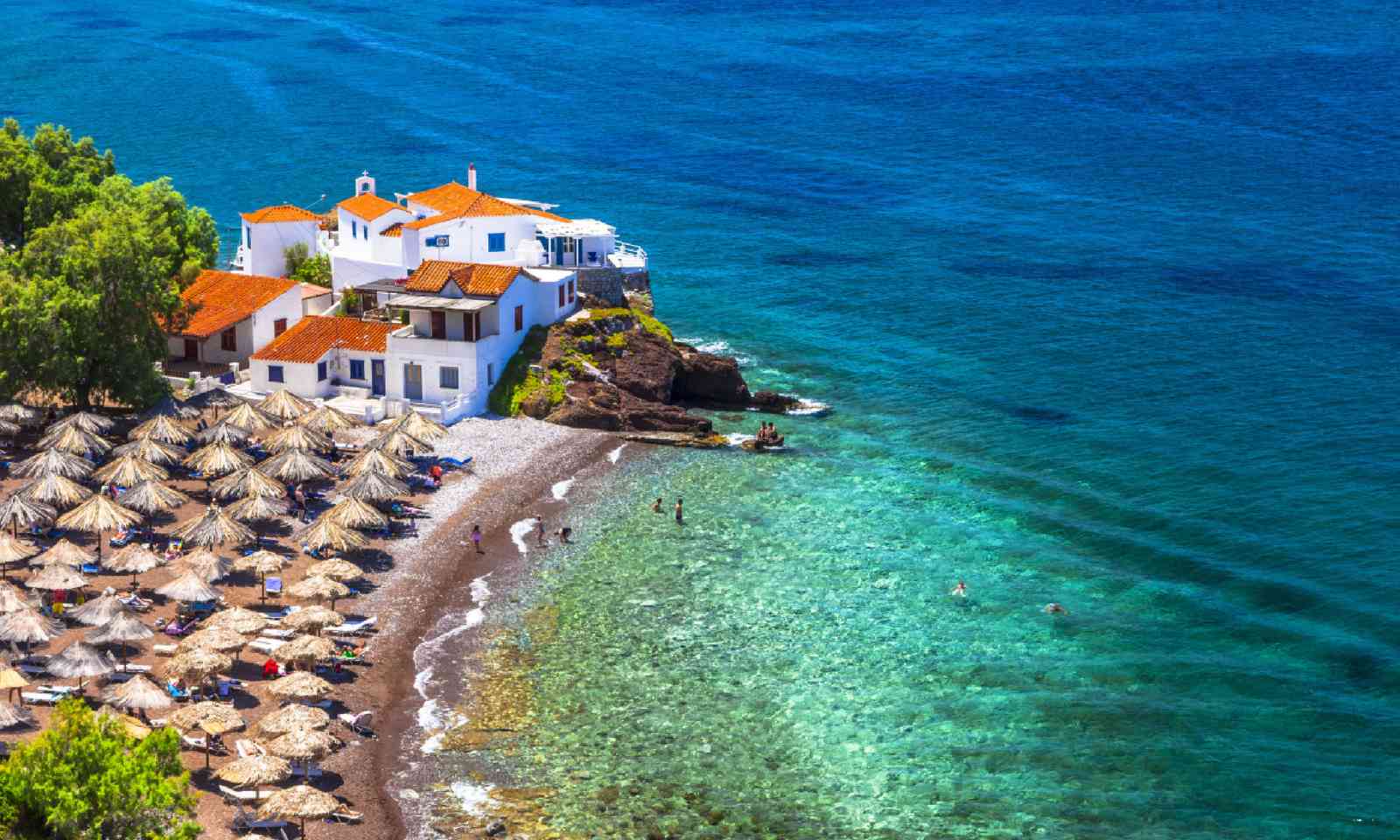 Day 3: Round things off

Get out of the city for some fresh air and a seafood lunch. You could take a tour or public transport along the Athenian Riviera; a popular excursion is to Cape Sounion, home to the Sanctuary of Poseidon. Otherwise, head to an island. Book your return and outward ferry tickets at the same time – as ones coming back in the evening are fuller and you don’t want to get stranded for the night.

Take the metro to Piraeus and then a ferry or hydrofoil. The charming island of Hydra is traffic-free, but the ferries get booked up in advance, especially at weekends. You’ll probably have more success getting to Aegina, the nearest island to Athens, and famous for its pistachios. Meander the waterfront and back streets before a leisurely lunch.

Tsias is popular with Greek visitors, and offers the classics. Try the day’s fresh fish or the prawn saganaki. Kappos Etsi lacks a sea view but offers food with a more contemporary twist in its delightful courtyard.

Back in Athens, round off the day with a glass of vino at one of the city’s bars. Wine Point is near the Acropolis and offers 200 wines. By the Glass in Syntagma does what is says on the tin, with a range of sizes available.