9 things to do in Ethiopia

World class treks. Rare wildlife. Other-worldly monuments. Where to start? With our guide, of course...

1. Meet the locals in the Omo Valley 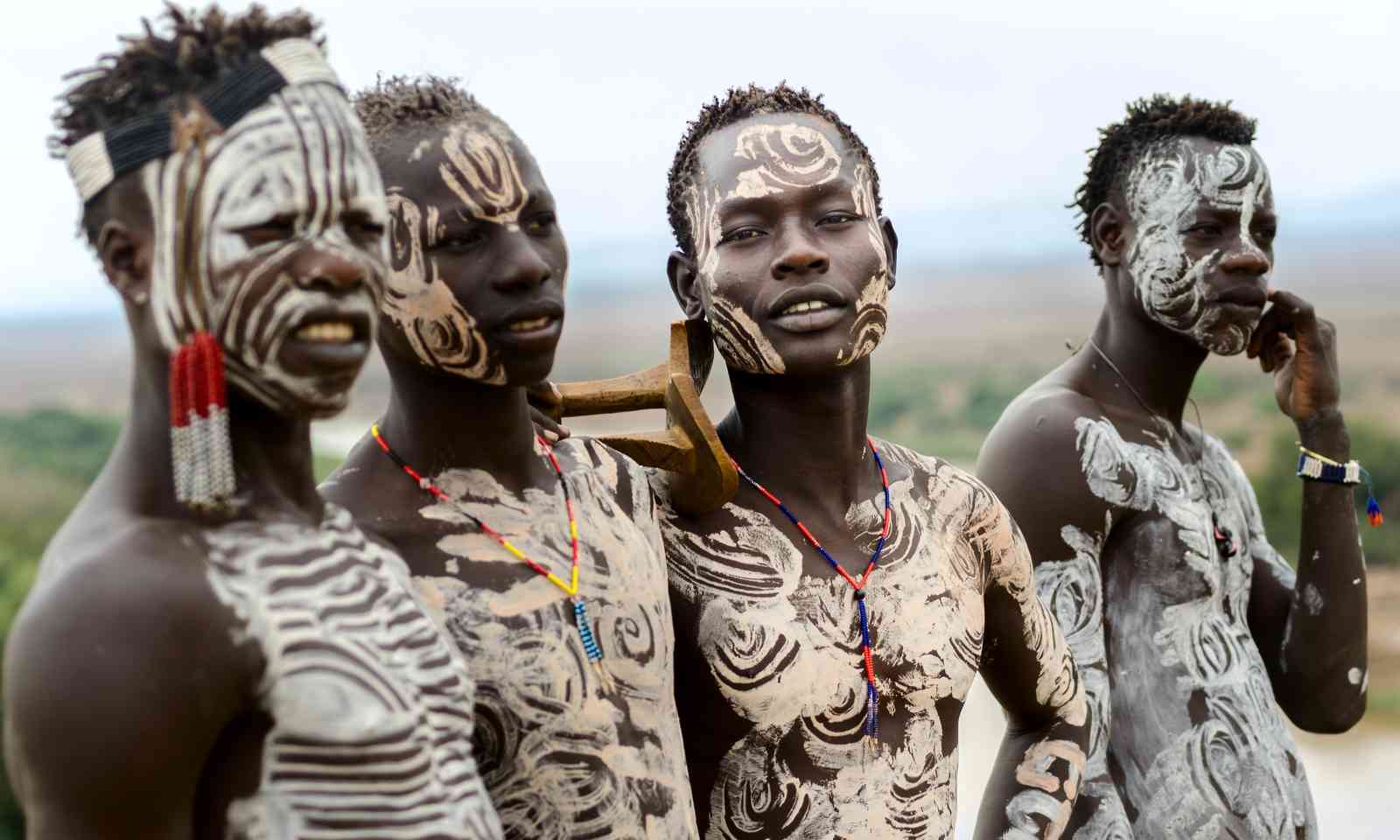 Spanning the border of Ethiopia and Kenya, in a remote enclave of the Great Rift Valley, lies the Omo Delta – a forgotten corner of Africa. Here travellers can glimpse the continent as the early explorers found it: an Africa peopled by exotic tribes proud of their traditional lifestyles and ancient customs.

Central to these pastoralist cultures are their herds of cattle and goats: people dress in clothes made from animal skins; blood mixed with milk is a staple drink; and a man’s wealth is judged by the size of his herds.

If you’re lucky, you’ll witness a Hamer bull-jumping ceremony, a seminal moments in a Hamer man’s life, where he runs naked over the backs of tethered bulls four times to mark his transition to manhood.

2. Make a fuss of drinking coffee 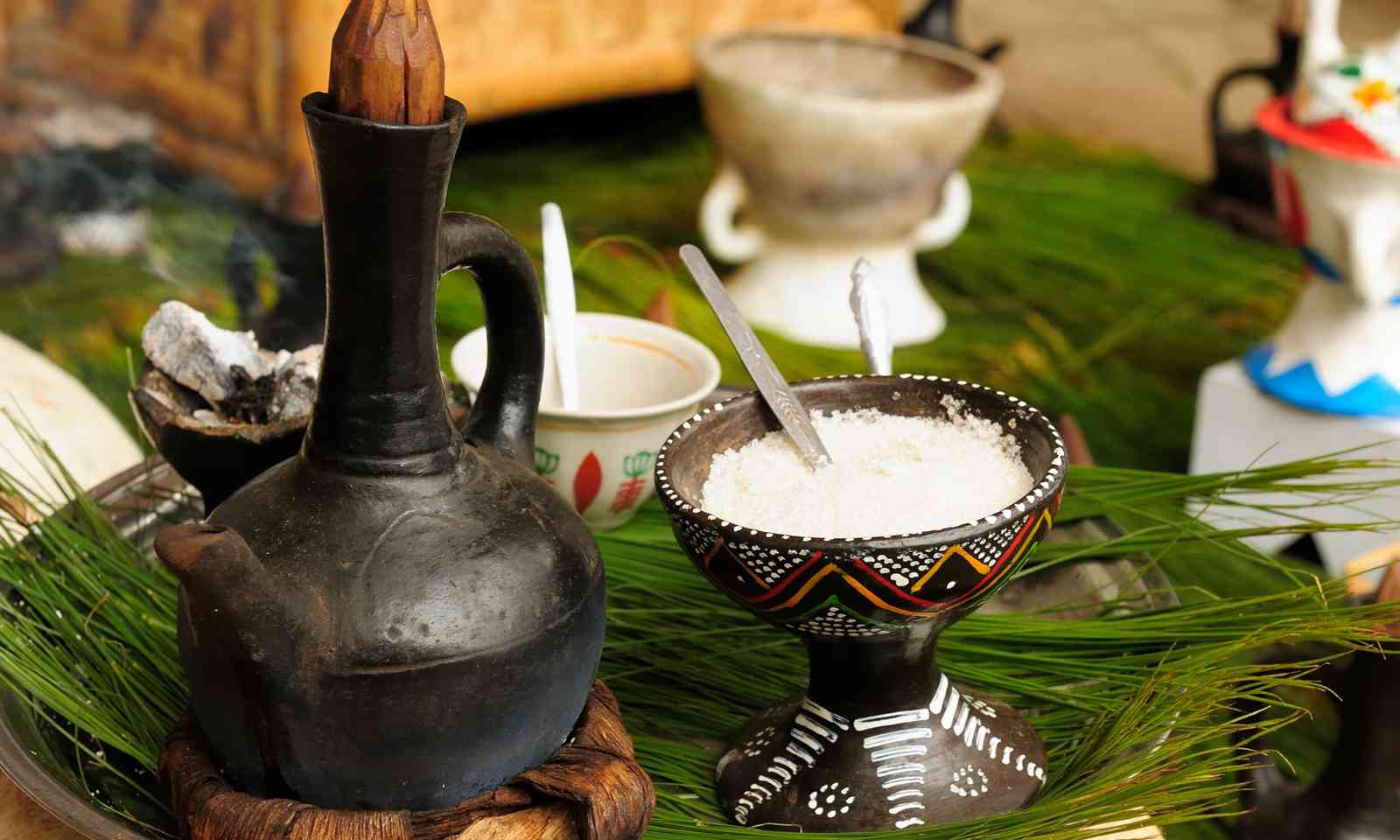 Coffee is an integral part of social and cultural life in Ethiopia. Indeed, Ethiopian folklore insists that coffee beans were discovered here around 800 AD when a goatherder noticed his flock becoming livelier after eating the red berries. It is almost certain that you will be invited to a coffee ceremony during your stay.

The ceremony is performed around a rekbot, a shelf-like box where the coffee is prepared and served. The beans will be roasted and ground in front of you and then mixed with spices in an ornate clay pot called a jebena. The coffee is poured in small cups from a height of one foot and served with a small snack like popcorn.

Be warned: You’ll be expected to drink three rounds of coffee. That’s how many it takes for your spirit to be transformed.

3. Marvel at the stone churches of Lalibela This rural town in north east Ethiopia is famous around the world for its monolithic churches, carved from "living rock." Just as Michelangelo cut away all the marble that wasn’t David, so these stone carvers had to remove all the rock that wasn’t a church.

The 11 rock churches of Lalibela are Unesco-listed and remain a place of pilgrimage for Ethiopia’s Orthodox Christians. The most famous – and most beautiful – church is the church of St George, carved in the shape of a cross. As you approach, it looks like a simple carving in the rock. But when you reach the edge and look down you appreciate the craftsmanship involved. 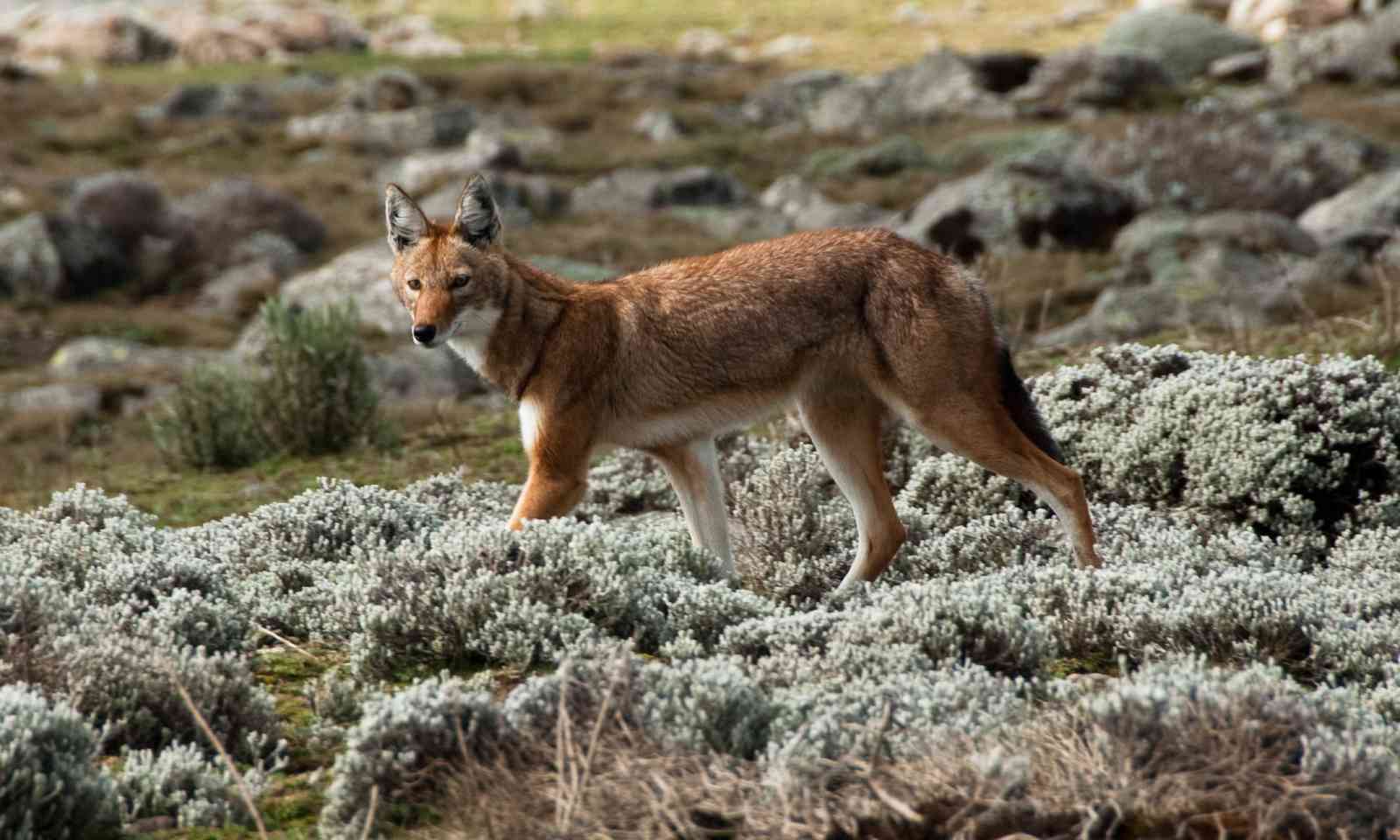 With its bright russest coat and black stripes on its tail and nose, the Simien wolf of Ethiopia is one of the prettiest in the world. It is also one of the rarest, with less than 500 left in the wild.

The Sanetti Plateau, sitting high in Bale Mountains National Park, offers the best chance to see them. The wolves survive here amongst the heather and the cloud forest because it’s too cold and inhospitable for locals to build homes. However, a new lodge – and conservation program – have made it easier for you to spot them.

5. Trek in the Simien Mountains 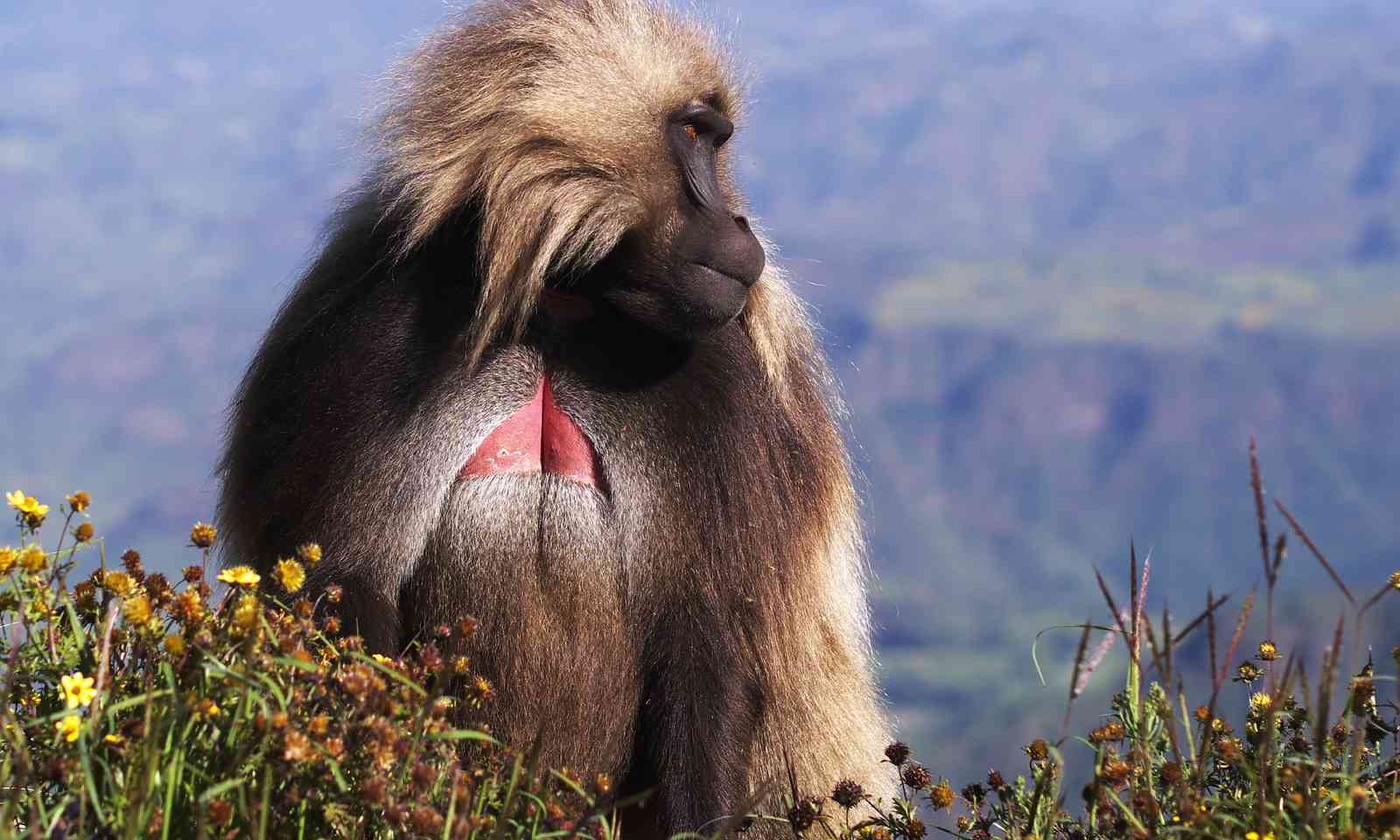 The Simien Mountains National Park is a designated a Unesco World Heritage site and it’s easy to see why. Well worn trails lead you along an escarpment 3,500m high covered in gleaming yellow meskel 'daisy' flowers like an alpine meadown, before dissolving into an enormous plateau defined by the movement of the locals and their flocks since time began.

Venture to the edge of the precipice and there, 2,500 metres below, is the Tekeze River, a shimmering piece of silver thread and the lifeblood of the cattle, mules, donkeys, goats, sheep that make this lush plateau their home. Keep an eye out for the thick-coated gelada baboons that live on these rocky cliffs. Watching them squabble and forage one these precarious footholds is one of the most unforgettable sights in Ethiopia. Injera is the staple of Ethiopian cuisine and an acquired taste. It is made from teff, a wheat-like grain grown in the highlands of Ethiopia, pounded into flour, mixed with water and yeast, then left to ferment for a few days. In the countryside, the women cook the pancake-like bread on large, round, clay cooking plates called mogogos, in much the same way as a crêpe.

Injera has a distinctive, almost bitter taste. It is served with dollops of tibs (strips of fried beef), doro (chicken stew) and piles of carrots and spinach cooked with garlic. Everyone eats together, sitting in a circle tearing off strips and helping themselves to the injera in the middle.

It’s the most sociable way to eat in the world. And a highlight of any visit to Ethiopia.

8. Seek out the holy waters of Lake Tana Lake Tana is Ethiopia’s largest lake and the source of the Blue Nile. There are 20 centuries-old monasteries on Lake Tana’s islands, and some such as Ura Kidane Meret allow female visitors. Each is decorated with distinctive, brightly coloured murals depicting biblical events, holy precursors of today’s cartoon strips.

Just a few kilometres down the road, the river plunges down the impressive Tis Isat waterfall, which is a particularly captivating sight during the wet season. Both the lake and the walk around the waterfall make for good bird-watching excursions.

9. Sneak a peek at the Ark of the Covenant 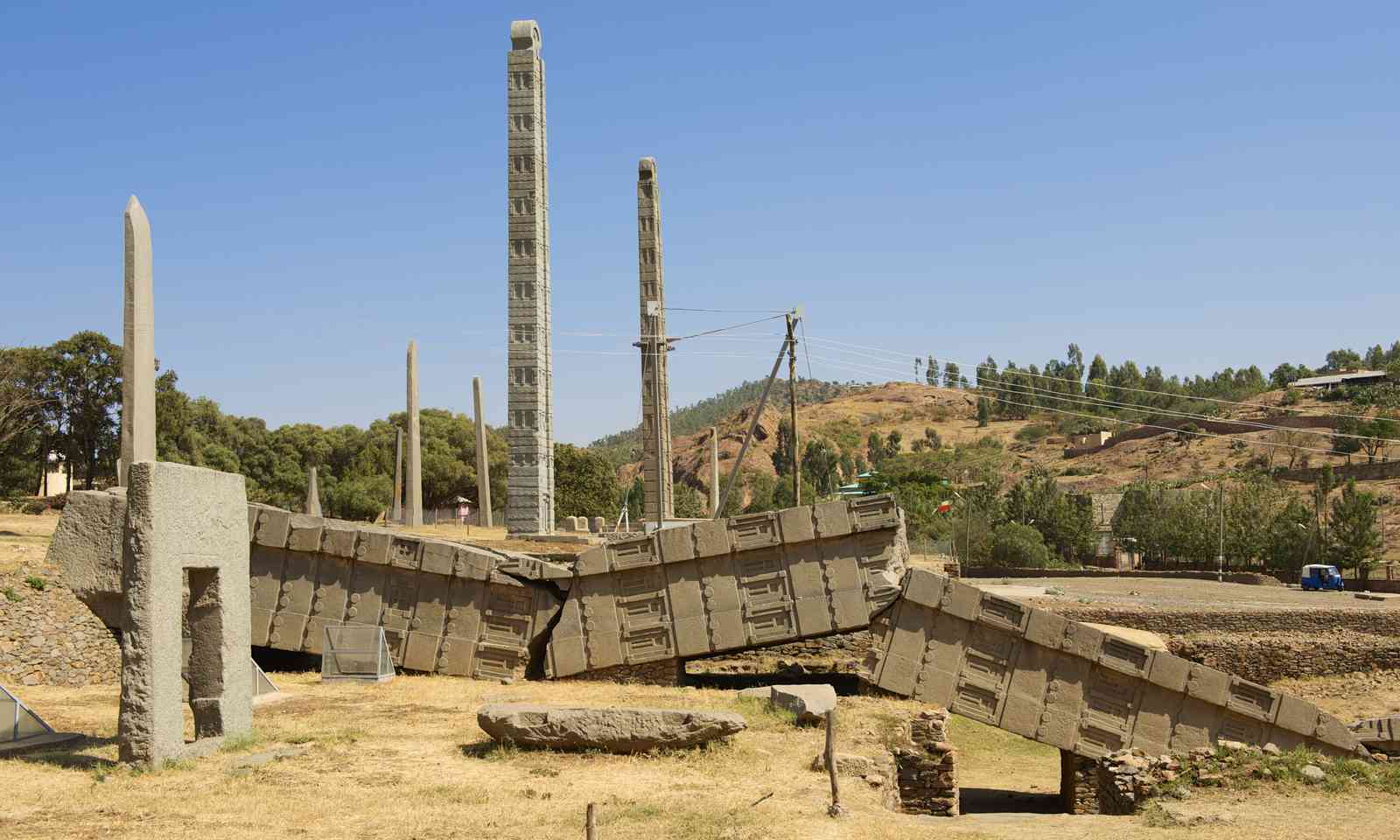 Hollywood would have you believe that one of Christianity’s holiest relics resides in a nondescript warehouse in America, thanks to the daring deeds of Indiana Jones. Ask any Ethiopian, however, and they’ll tell you that it is safely tucked away in Aksum, in the Church of our Lady Mary of Zion.

The church sits amongst a remarkable thicket of some 75 vertical memorial stones, or stelae, huge 2,000-year-old monuments to imperial power. And, sadly, you won’t be allowed into the inner sanctum of the church to see the Ark of the Covenant.

Time your visit right, however, and you’ll spot the Ark’s guardian, the only living man to have seen it, making his way to the entrance under a canopy of umbrellas held by intricately-dressed priests.

The Wanderlust guide to Ethiopia

Ethiopia: The land that time forgot