8 of the best things to do in Jordan

Petra is a given. But there are many more reasons to visit this biblical country than the city that gives Jordan its fame, with the stars of Wadi Rum and diving in the Red Sea being just a few of them…

1: Have every emotion heightened at Petra 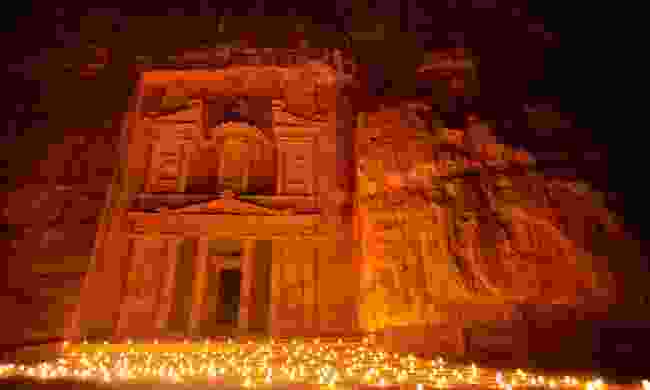 The Treasury at Petra lit up by candles at night (Shutterstock)

Monumental but also astonishingly intricate. The tombs etched into the pink-hued cliffs of Petra are still, and probably always will be the absolute highlight of Jordan. Squeeze between the alarmingly narrow rock canal of the towering Siq, appreciating its worn Nabataean carvings and strange erosion. Around a mile later, you’ll emerge at the literal light at the end of the tunnel – the Treasury. The most popular and mesmerising sight in Jordan glows out from the pock-marked cliffs in which it stands, basking its colonnaded facade in the sunshine.

Ascend to the Monastery, the Treasury’s bigger, hill-hidden sister. Next explore the royal tombs. The most eye-catching of these is the Urn Tomb, whose shadowy archways, one cluster stacked on the other like clenched teeth, will leave you open-mouthed.

The High Place of Sacrifice offers the best views. From here, what seemed indescribably huge from the ground is now moused by the mountaintops you stand among. For an even more emotional experience see Petra at night, when as many candles seem to illuminate the Treasury as stars brighten the sky. 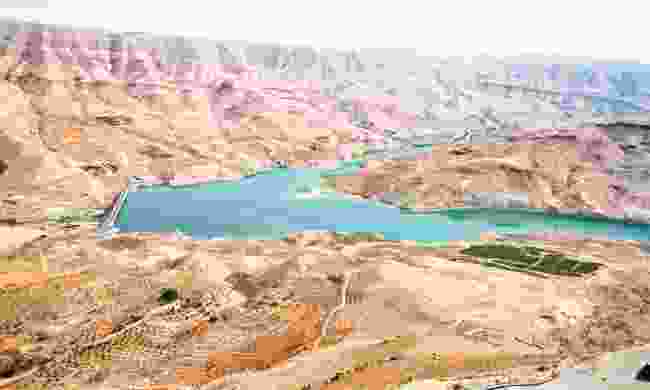 Spanning more than 600km across eight regions, the Jordan Trail fluctuates between rugged, arid, and sometimes green-drenched landscapes. The whole route from Umm Qais to the Red Sea at Aqaba will take you over 30 days. But it’s awe-inspiring magnitude can be captured by just walking certain sections.

Starting in Zarqa will give you the pleasure of crossing the Wadi Mujib. With its marble run-like roads, patches of green, and the azure streak of water flooding its depths, it more than deserves the title of the Grand Canyon of Jordan.

Perhaps the most impressive section is Dana to Petra. This offers stunning mountain views, glorious countryside, and passes the Dana Biosphere Reserve. Keep a look out for rare species such as sand cats and the Syrian wolf. You may also see the Bonelli’s eagle circling above. The last few hours of this section from Little Petra to the Royal Tombs at Petra is a scenic way to dodge the crowds.

3: Camp out under the stars of Wadi Rum 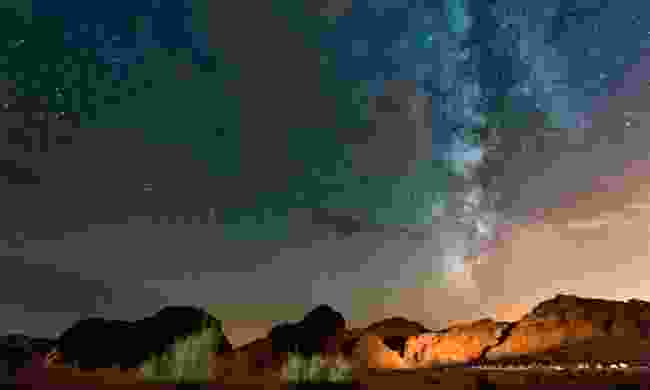 Blazes of orange and red sands, smatterings of stripe-embossed rocks, and clusters of alarmingly green bushes: being in Wadi Rum can often feel like you’re on an alien planet. Staying in a Bedouin camp is the best way to explore this powerful, dangerous but also strangely peaceful desert.

Known for their friendliness, the Bedouin people will happily teach you about their lifestyle. Feast on an authentic meal of Zarb, where juicy meat and flavour-absorbed vegetables are barbequed underground. Listen to their captivating stories before drifting off under a sky pierced with stars.

Daytime Wadi Rum makes for an adventurous setting. Ride a camel, trek up mountains, and race around on a quad bike. For the best views take a hot air balloon to see the sands, soft dunes, and mountains sprawl out beneath you.

4: Get caught up in the cultural capital 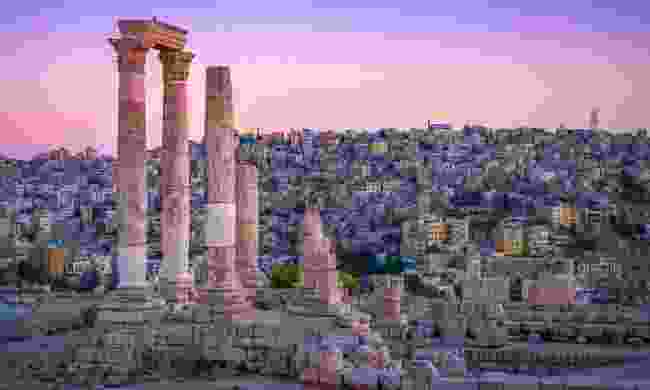 Amman is more of a mosaic of adjoining villages than one entity. Downtown is a constant rumble of traffic and bustling people. Its highlight is the Roman Theatre where the seats are chiselled out of the mountain. Go to the top for stunning sunset views.

Contrast Downtown with a stroll through peaceful Jabal al-Weibdeh. Visit the National Gallery of Fine Arts which contains more than 2,000 pieces of contemporary art, mostly from Middle Eastern and African artists.

The most ancient part of Amman, Jabal al-Qal’a is also the most jam packed with visitors. Translating as ‘Citadel Hill’, the best ruins here are the Roman Temple of Hercules, the Byzantine Church and the Umayyad Palace. The peak of the hill is one of the highest points in Amman, offering spectacular views over this beguiling city. 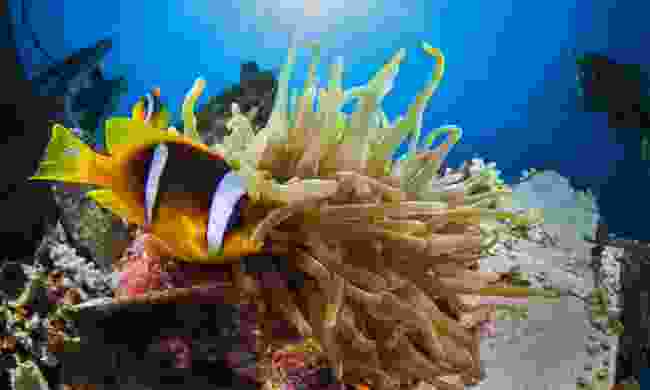 Serene, sea-breezed Aqaba is the perfect place for a float in the Red Sea. With its huge stretch of palm tree-lined white sands and azure waters gently lapping at the edge, you’ll struggle to find a more postcard-perfect setting.

Join a cruise to get further out on the water. Venture to Pharaoh’s Island, off the coast of Egypt for an alternative snorkelling spot. Another popular option is the glass bottom boats, where you can see the vibrant coral life beneath without wetting a single toe.

The best way to see the marine life is undoubtedly by diving in. Float past fascinating fluorescent fish, seahorses, turtles, and the odd wreck, sunken and coral strewn on the seabed. Thought to be the most photogenic option for exploration is the Cedar Pride which lies stranded between Rainbow Reef and the Japanese Gardens. 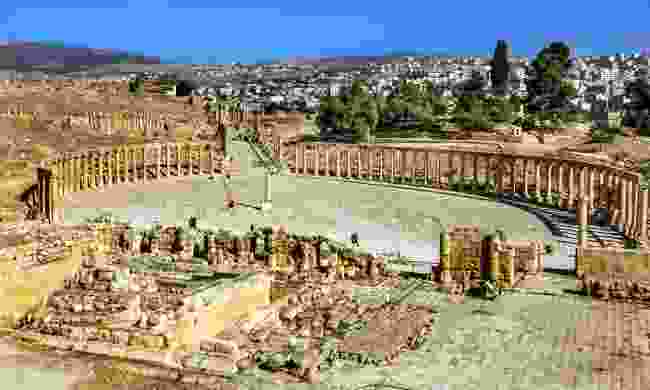 The collonaded forum in the ancient city of Jerash (Shutterstock)

Looking like they could crumble into dust at one touch, it’s astonishing the ancient ruins of Jerash are still standing. In fact, they’re the largest and best preserved of their kind in Jordan. The 13m-high Hadrian’s Arch guards the entrance. Walk through the door-less archway to start your journey through the times of the Roman Empire.

Seeing it all in detail can take days but the highlights can be covered in just a few hours. Visit the Hippodrome, the smallest stadium of its kind but certainly not lacking in magnificence. Watch a chariot race here to see horses’ hooves and wooden wheels kicking up dust.

Another highlight is the forum whose columns follow the curve of the paved floor like a giant domino run. Next to this is the neatly cobbled cardo maximus. Stroll this road that spans almost the entire length of the city, trying to imagine it crowded with people and with chariots careering past. 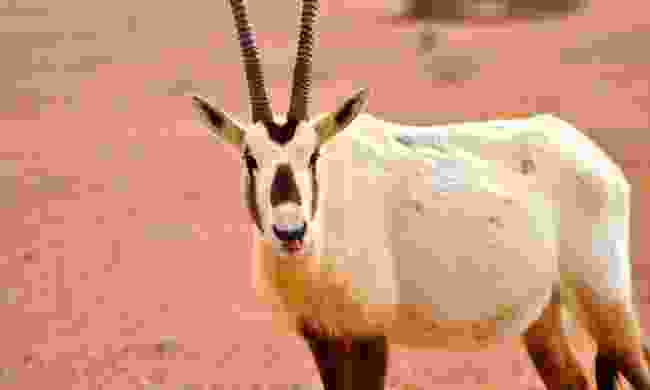 Once extinct in the area, the Arabian oryx now roams once again in Shaumari Wildlife Reserve (Dreamstime)

If you’re hoping to steal a glance at some of the Middle East’s rarest animals, head for the Shaumari Wildlife Reserve. At just 22 sq km, this is a small park that undertook a big task: to breed endangered animals and those that had become extinct in the region.

A symbol of the reserve’s success is the Arabian oryx that became extinct in Jordan around the 1920s. However, a breeding programme in the USA means this white antelope once again roams the region. Join a safari and cruise along the arid landscape looking out for the majestic creature as well as gazelle, striped hyena, jackal, and wolves.

Nearby is the Azraq Wetland Reserve. This green-cloaked park hides walkways where visitors can peak at the variety of birds that find refuge here. These include local, migratory, and the occasional rare species of bird.

8: Make your own reading of the Madaba Map 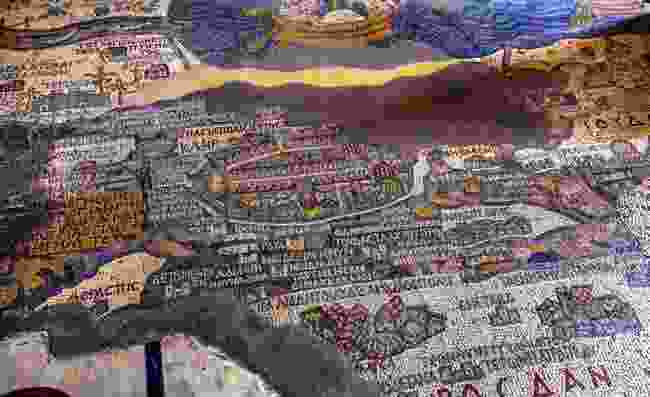 Whether looking from a mountaintop at the golden-domed mosque surrounded by sun-faded buildings or studying a mosaic up close, you’ll immediately be struck by the beauty of Madaba.

The most impressive mosaic decorates the floor of St George’s Church. Only a quarter of it survives but the Madaba Map remains the oldest and most important one of the area. Marvel at the minute stones, whose assortments of colours have been carefully arranged to shape rivers, seas, and roads. Time has even been taken to embellish the map with tiny palm trees.

For more of these vibrant and eye-catching mosaics, wander the Madaba Archaeological Park. Various churches display colourful creations of animals, plants, and mythological creatures. Don’t miss the magnificent piece that almost carpets the floor of the Church of the Virgin Mary, showing hunting scenes garnished with circles, diamonds, and swirls. Enter the Hippolytus Hall and study the pictures closely to uncover the Greek tragedy of Hippolytus depicted in the mosaic.