7 things you must do in Bhutan

The last of the Himalayan kingdoms, there’s nowhere on Earth quite like Bhutan. Here’s how to get underneath its skin: exploring its monasteries, tackling treks and finding ultimate happiness... 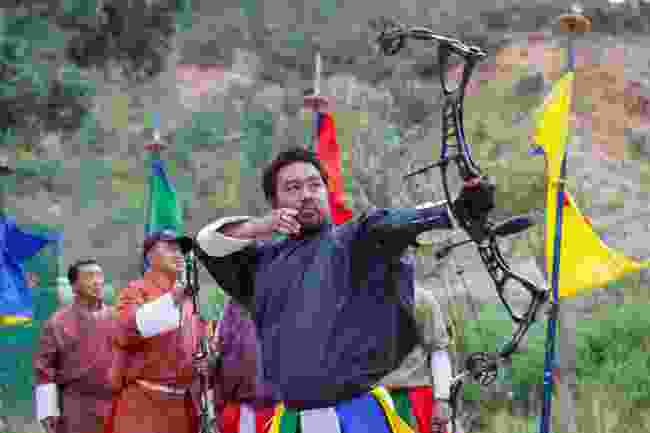 Archery is Bhutan’s national sport and its passion. On hills, across fields and in stadiums throughout the country, you’ll find multi-coloured throngs of men in their patterned ghos (traditional robes) taking turns to shoot arrows at a tiny sliver of a target positioned a whopping 140m away.

Around them, residents of the neighbouring village heckle, and cheerleaders – groups of women singing and dancing in circles in their finest silk outfits – offer words of encouragement to their team and derision to the opposition. This boisterous cheering, singing and dancing from the female spectators on the sidelines is just as entertaining as the match

Every village in Bhutan has a field for archery, with Changlimithang Stadium in Thimphu the kingdom's premier archery field. 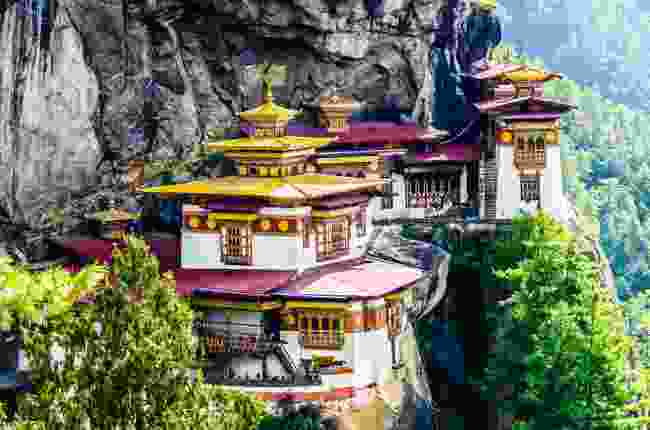 Clinging to a sheer cliff face, 900m above the Paro Valley, Taktsang Lhakhang (Tiger's Nest Monastery) is Bhutan’s Machu Picchu, its Taj Mahal – the cliff-face that launched 1,000 postcards. It features in every brochure, book and website about the country, but thanks to Bhutan’s restrictions on visitor numbers, it doesn't feel overrun.

Of course, that could also be down to the lung-bursting trek up a steep, rocky track to reach it. This vertiginous cliff, only 10km north of Paro, was chosen as a meditation site by Guru Rinpoche who, according to legend, arrived here on a flying tiger.

The temple has been rebuilt twice, after devastating fires in 1950 and 1998, and you’ll have no choice but to arrive on foot. But the view across the valley to the temple, and the quiet aura of contemplation within, ensure that a visit to the Tiger’s Nest is a highlight of your visit to Bhutan.

3. Search for a yeti (and other elusive creatures) 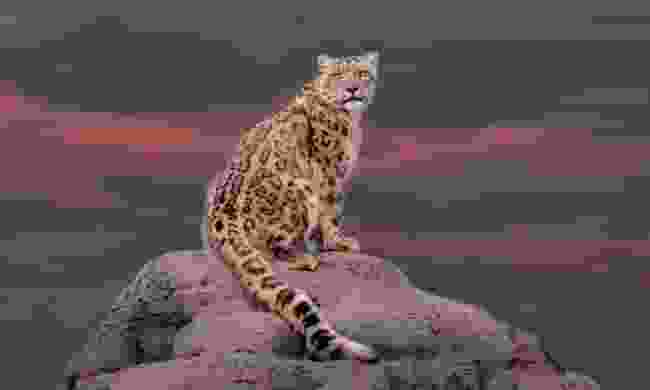 A snow leopard in Bhutan (Dreamstime)

As befits a Himalayan kingdom cut off from the rest of the world for centuries, Bhutan has its fair share of myths and legends.

The most famous is the yeti, or migoi to the locals, and despite the likes of Reinhold Messner declaring that what people are really seeing is a Himalayan bear, the creature has a strong hold on local culture. Every villager has a tale about a close encounter with a big, hairy migoi and advice on how to escape one.

Indeed, Bhutan has a National Park dedicated to the preservation of the yeti, a remote 740-square-mile wilderness in the east of the country called Sakteng Wildlife Sanctuary. Your chances of seeing a yeti are still pretty slim, but the park is also home to other endangered species, including red pandas, snow leopards and tigers, so there's no shortage of other elusive creatures for you to track down.

4. Dance with monks at a Tsechu festival 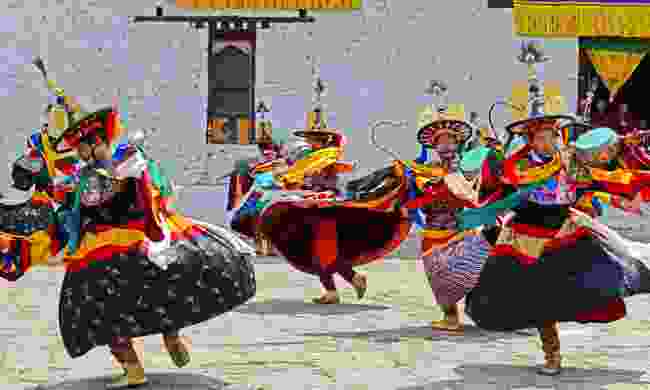 Ask any Bhutanese local what the highlight of their year is and they will tell you it’s tshechu: a large social gathering held on the tenth day of any given Tibetan lunar month, depending on the region.

It is a time of brisk trade and ceremonial dances, as well as a chance to catch up with friends from remote and outlying villages. Paro Tshechu, held every Spring in the Paro Dzongkhag, is considered the most spectacular and colourful.

The highlight of any tsechu is the Cham dance, where monks don fearsome masks and elaborate costumes and perform energetic routines to raucous traditional music. Each dance has a moral message, particularly with regards to showing compassion for sentient beings, and is considered a form of meditation, albeit a lively one.

The unfurling of a giant thangka or throngdrei, marks the end of proceedings and the point at which revellers gather to receive blessings before heading home again.

5. Get to the bottom of a phallus fixation 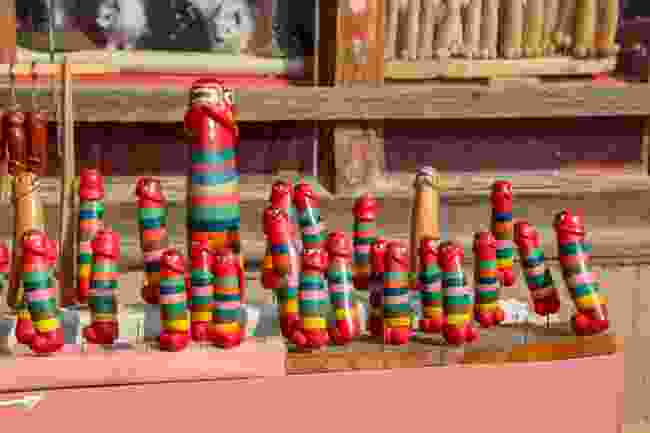 The tiny village of Sopsokha in the Punahka region of Bhutan is not for the easily shocked. Nearly every building is adorned with a giant phallus.

Some are unadorned. Others are decorated with ribbons. But as the village is on the path to Chimi Lhakhang, a monastery dedicated to Drukpa Kunley - Bhutan’s favourite saint, monk and poet, who also referred to his penis as the ‘divine thunderbolt’ - they are everywhere.

In such a devout and moral country, the fixation with phalluses seems strange, particularly when you consider that it is women who inherit property in Bhutan and the men who move to their wife’s village.

But something about this intemperate and irreverent monk, who taught lessons through farting and subdued ogresses by turning his penis into a thunderbolt, appeals to the Bhutanese psyche. At the very least, it'll provide titillating content for your Instagram feed.

6. Trek into the unknown 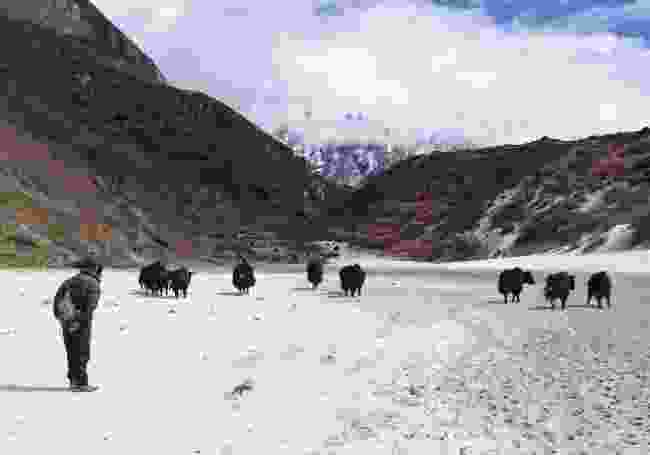 Snuggled up against the some of the world’s highest mountains, and free from the tourist hordes that descend upon Nepal, Bhutan is the gold standard for trekking in the Himalaya.

From gentle treks through ancient rhododendron forests to a challenging, 25-day hike that traverses half the country, Bhutan offers something for trekkers of all levels.

The Jhomolhari Trek is Bhutan’s most popular and follows an ancient trade routes through Jigme Dorji National Park to fantastic views of sacred 7,314m Jhomolhari Peak on the Tibetan border. The Bumthang Cultural Trek avoids the high peaks and offers instead a timeless succession of picturesque temples, monasteries and traditional villages. And birdwatchers will love the Gangte Trek that focuses on spotting black-necked cranes.

If time and money are no object, you’ll want to tackle the notorious Snowman Trek. A mini-expedition through the remote Lunana district, it is considered one of the world’s toughest (and most expensive) treks. It will see you scale peaks as high as 5,320m. 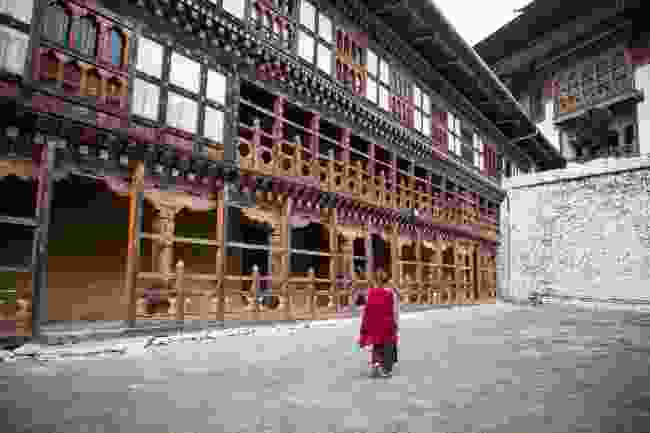 Bhutan is famous throughout the world for focusing on a better quality of life, rather than a better set of trade figure. The then-King Jigme Singye Wangchuck called it Gross National Happiness back in 1972.

And it is a concept that the country’s leaders have tried to adhere to, as they attempt to steer Bhutan into the future without sacrificing what makes it so special.

For the visitor, it is a chance to contemplate a different approach to life and society, where happiness and well-being of all people is the ultimate purpose of governance. It’s a philosophy that manifests itself in different ways. Whereas the Himalayas have been largely deforested in other countries, 75% of the trees remain here.

The result is a world that is strangely familiar but patently different. And one bound to get you asking yourself how you can increase your own GNH.

Interested in Bhutan? Explore trip options through our Trip Finder

Learn more about Bhutan and its neighbours:

These are the best treks through Bhutan

The 13 best treks in Nepal (for every type of trekker)