From beaches in the Isle of Skye to museums in Bolivia, dinosaurs are easy to find – if you know where to look. Peter Moore tracks down dino footprints, fossils and theme parks around the world... 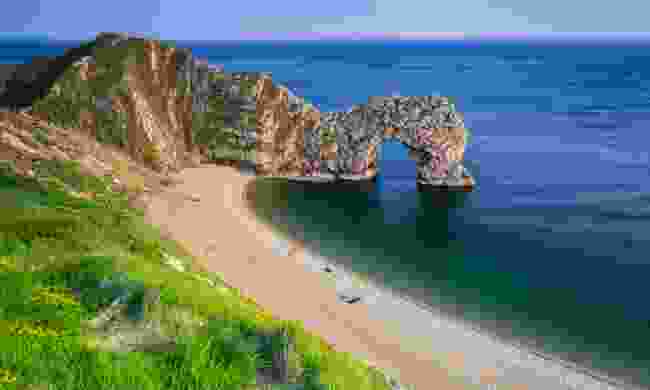 Durdle Door, on the Jurassic Coast of Dorset (Dreamstime)

The Jurassic Coast stretches for 95 miles between Exmouth in East Devon and Studland Bay in Dorset, and is England’s only natural World Heritage site. The sedimentary layers here host the stories of 185 million years of Earth’s history, and fossickers and scientists alike are constantly unearthing Jurassic-era treasures.

Away from the crumbling cliffs, the area’s prehistoric past is celebrated and preserved. Exmouth Council has just unveiled a collection of dinosaurs throughout the city. And in Kimmeridge, a state-of-the-art museum known as the Etches Collection, features a ground-breaking collection of Jurassic Coast fossils.

The museum is home to the extraordinary fossils found by local collector and expert Steve Etches. Over 30 years, Etches discovered, collected and researched over 2000 late-Jurassic Kimmeridgian specimens.

Using the latest CGI technology, the museum ‘immerses’ visitors in this world – a sometimes terrifying underwater struggle to live and survive – and brings the creatures to life as if they were modern day animals. 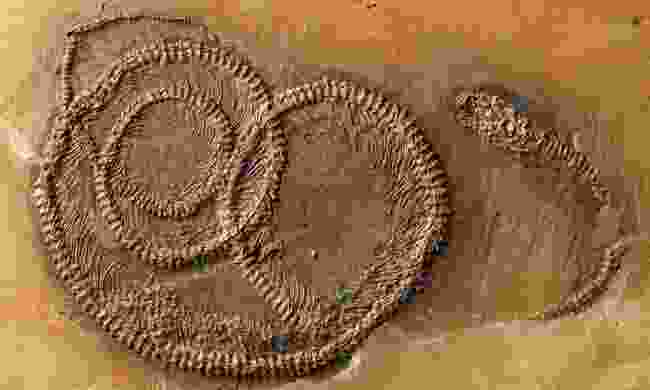 Tucked away in the Odenwald region near Frankfurt, the Messel Fossil Pit is a rare window into the Eocene period and, in particular, the evolution of mammals. Once a volcanic lake surrounded by tropical forest, the oil shale here has revealed such a host of prehistoric treasures that it has been declared a UNESCO world heritage site.

A visitor and informaton centre opened on the edge of the pit in 2010 and houses a collection of the site’s most intriguing finds. One of the most popular is the remains of a prehistoric horse called Eurohippus, small enough to fit in a shopping bag.

The pit is still offering up treasures. Paleontologists recently discovered a perfectly preserved 'fossil food chain' – a snake with a lizard in its stomach, which in turn had a beetle inside its stomach. 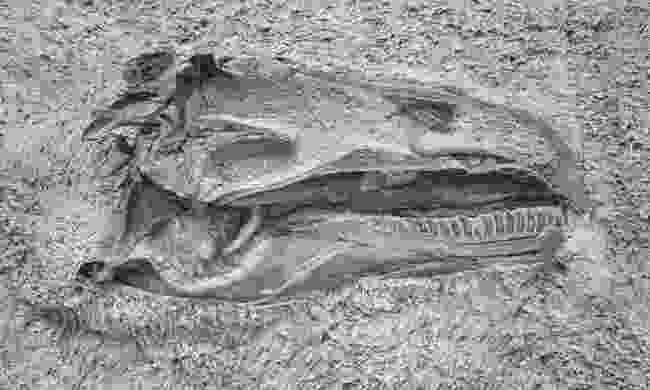 Millions of years ago, when the USA's southwest was not as dry and inhospitable as it is now, a sandbank at the point where the Green and Yampa rivers meet became something of a dinosaur graveyard.

Carcasses of dinosaurs from all along the rivers washed up and got stuck here, preserved for all eternity when the sandbar turned to rock. That ‘Wall of Bones’, a tilted layer of rock containing over 1,500 dinosaur fossils, can be viewed at the Quarry Exhibit Hall in the Dinosaur National Monument on the Utah/Colorado border.

The wall contains the remains of Allosaurus, Diplodicus and Stegosaurus, and there are knowledgeable rangers on-hand to help you tell one from the other.

If you’d like to see life-sized dinosaurs, set in the land they once called home, drop by Moab Giants where you can walk among scarily-real models on their dinosaur trail. 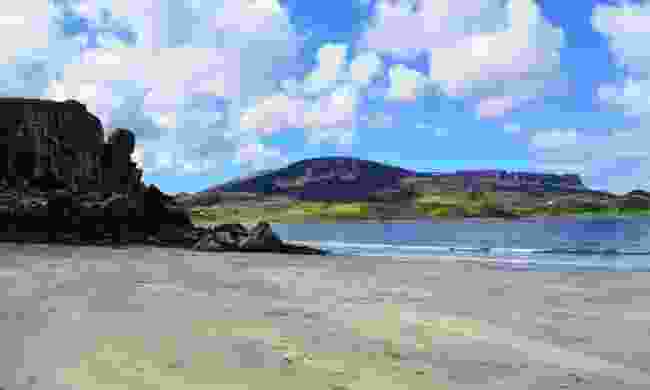 At low tide on Staffin Beach on the Isle of Skye you can literally walk in the footsteps of dinosaurs when the receding sea reveals prints left by tiny dinosaurs 165 million years ago. Should you miss the tide, the Staffin Museum nearby has casts of the prints, as well as dinosaur bones and other fossils from the areas as well.

In 2015, more fossilised dinosaur footprints were discovered just south of Duntulm Castle. Again, only visible at low tide, these were made by sauropods – a group of huge long-necked dinosaurs that included the brontosaurus. They date from the Jurassic Period and make up the biggest trackway in Scotland, prompting the Isle of Skye to declare itself the Dinosaur Isle of Scotland. 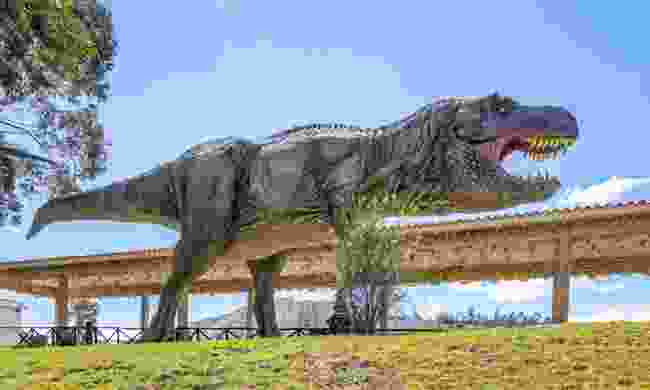 Just south of Sucre, in a quarry owned by Bolivia's National Cement Factory, lies an extraordinary sight. Here, amongst giant earth-moving machinery, is a huge limestone wall covered in thousands of dinosaur footprints. Bizarrely, the footprints seemingly lead from the bottom, up the vertical wall and over the top.

Scientists believe the footprints were made by a baby T.Rex, flanked each side by its parents. They hadn’t defied gravity. The muck in which they walked solidified and went vertical when plates deep beneath the earth crashed together.

At the top of the cliff, you’ll find the Cretaceous Museum, home to 24 life-sized dinosaur models and a viewing platform that reveals the sheer magnitude of the world’s largest collection of dinosaur footprints. 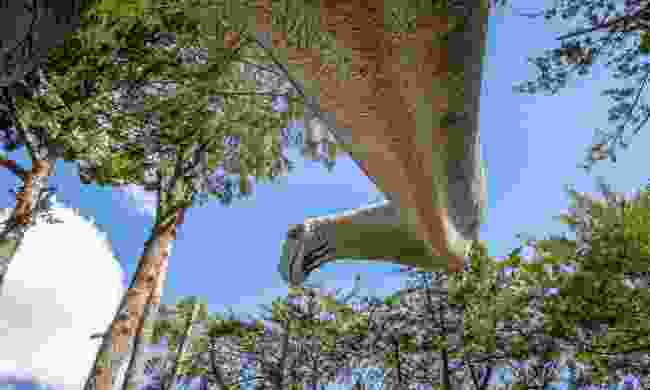 Dotted at sites across the world, dinosaur footprints are relatively a dime a dozen. A geological survey undertaken in 2016 in the village of Vallcebre, near Barcelona, found the impression of a dinosaur’s scales, formed 66 million years ago when it lay down in the mud.

Scientists believe the fossil probably belongs to a large herbivore sauropod (they discovered footprints close by). The fact that the fossil dates from the sedimentary rock period proves that it was one of the last dinosaurs to live on the planet. 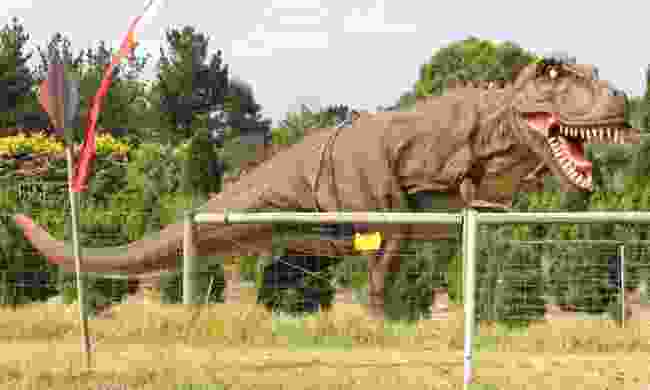 A lifesize dinosaur chained to a fence in Australia – after all, we wouldn't want it storming through the city! (Dreamstime)

The trail also takes in other important sites in Australia’s prehistoric history. At Lark Quarry Conservation Park, 110km south of Winton, you’ll find the only evidence of a Dinosaur Stampede on the planet.

Closer to Winton, you’ll find the Jump-Up Lookout, home to Banjo the Australovenator and the Age of Dinosaurs Museum, featuring the largest collection of Australian Dinosaur fossils in the world.