From a cat cafe in London to a whole city dedicated to cats in Malaysia, here are seven attractions from around the world that cat lovers won't want to miss

Not a monument to Andrew Lloyd Webber’s long-running musical, but instead the Cats Museum in Montenegro is a quirky venue dedicated to all things feline. If you want to see a 18th century postcard with a cat on it, or a cat-themed stamp that could be used to send it, this is the place for you. There are even lurid posters advertising pulp fiction from the 1930s, each one featuring a cat, of course. 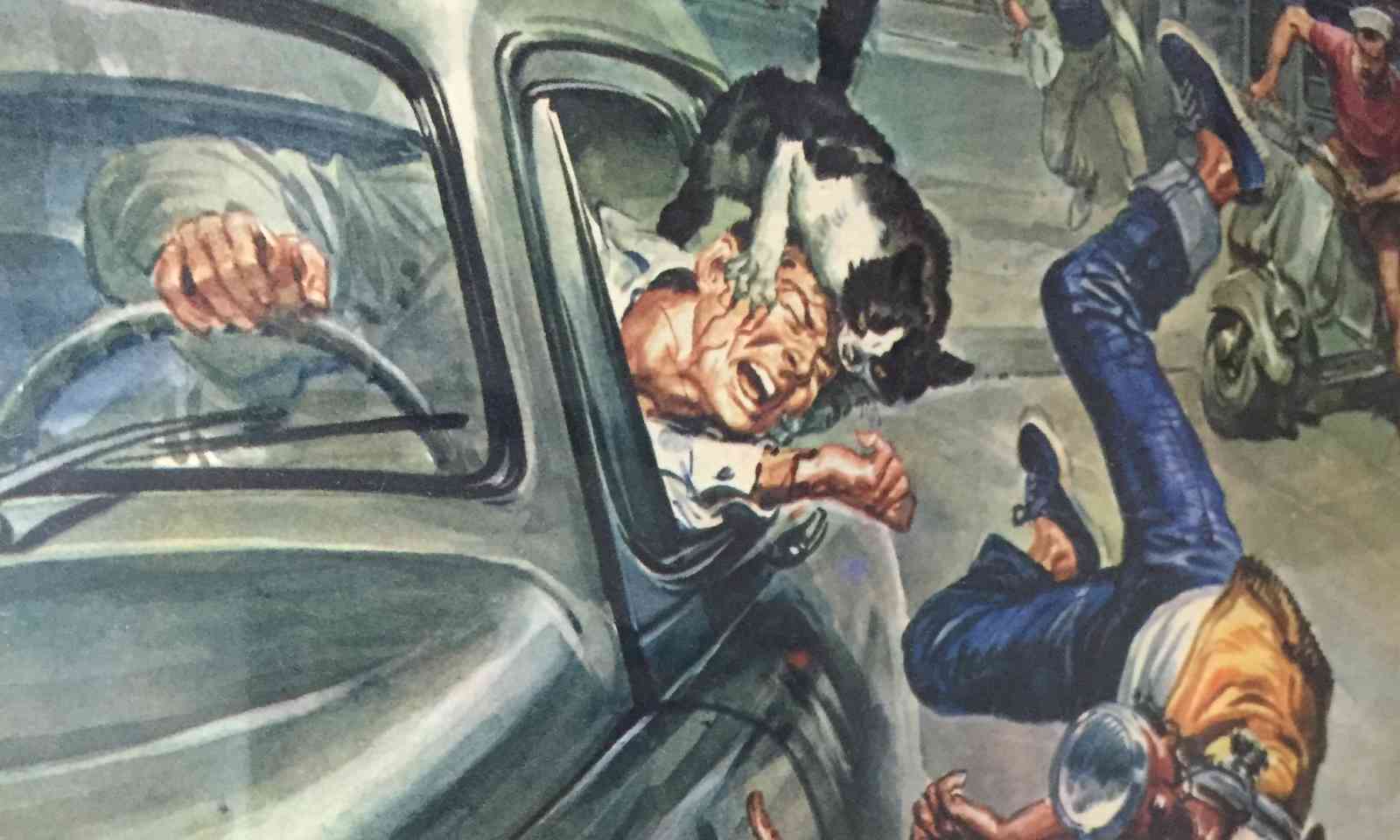 Tucked away in a tiny square in the old town of Kotor – a town that claims the cat as its symbol – the museum was set up by the Countess di Montereale Mantica to house her sizeable collection of cat memorabilia. It only costs a Euro to enter, with all funds used to help care for the city’s sizeable collection of street cats.

Moored on a canal in Singel, just down from The Doors coffee shop, this houseboat is a sanctuary for the homeless cats of Amsterdam – a place for them to sleep and eat until they are rehoused to loving new homes. 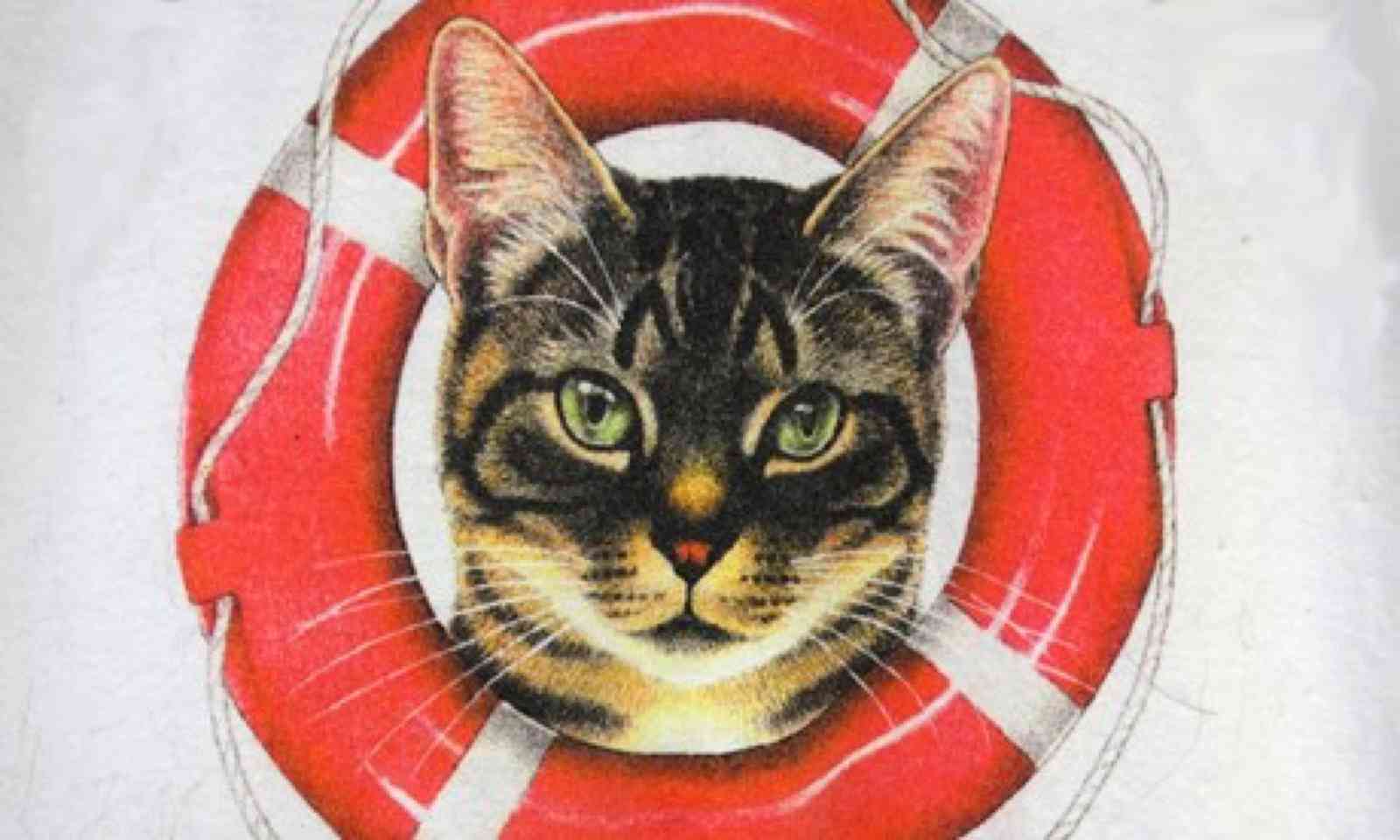 Entry is free, but any donations for the running costs of the boat are appreciated. Be warned: some of the long-term residents are ‘characters’ and not adverse to taking a swipe at unsuspecting visitors.

Ciorani is not an attraction, as such. It's just a tiny village tucked away in the southern reaches of the Carpathain mountains in Romania that is overrun by cats. Indeed, with four cats to every human inhabitant, Ciorani has officially been recognized as the ‘World Capital of Cats.’ 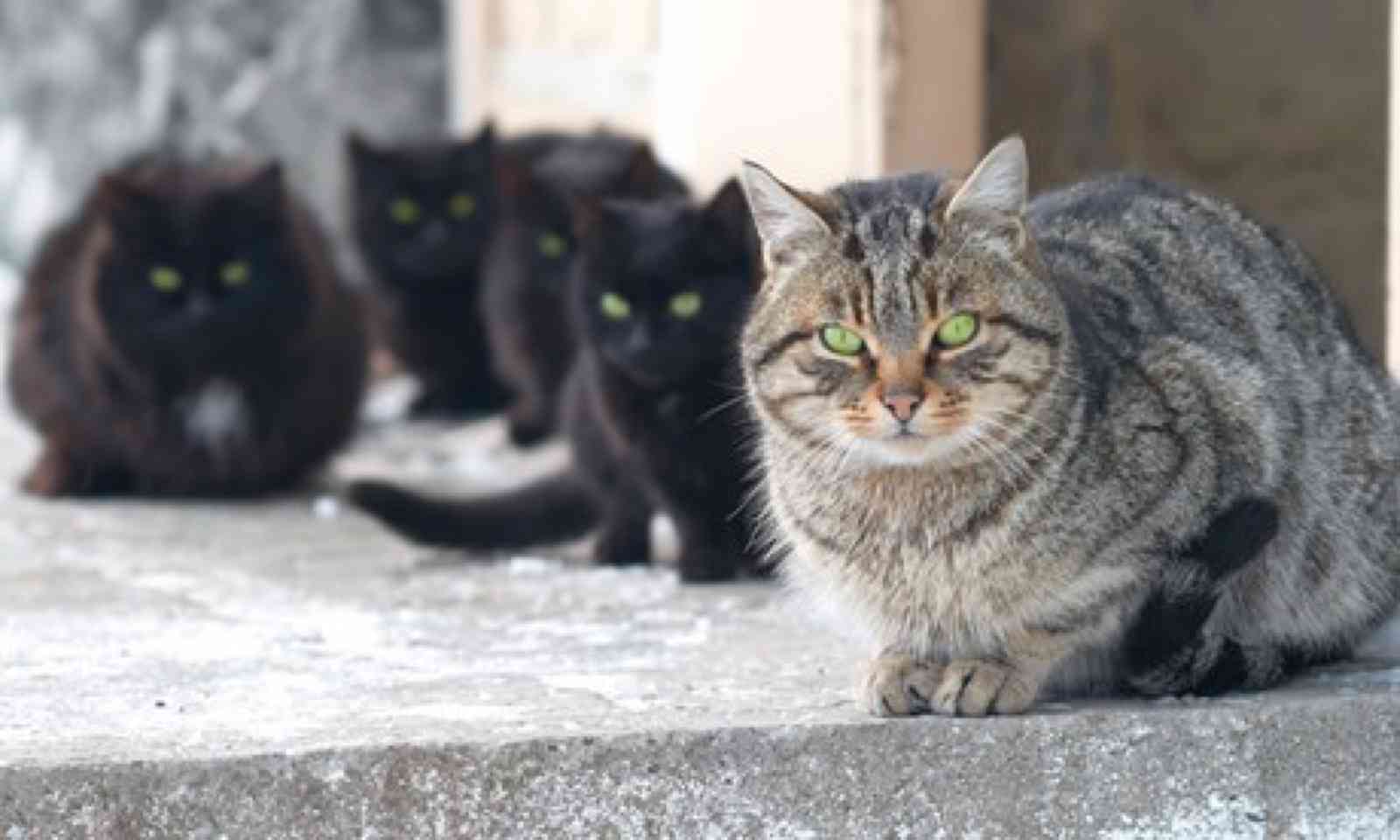 A group of cats, possibly in Romania (Shutterstock.com)

Once you’ve seen the cats, there isn’t much else to do. Thankfully, the vineyards near Focşani aren’t too far away, so you can spend time over one of the region’s Gothic Merlots and contemplate what life would be like in a place where the cats are king.

Created to be a quiet calm refuge in the midst of busy London – for both humans and cats – Lady Dinah’s Cat Emporium in Shoreditch works on the principle that it is impossible to look at a sleeping cat and feel tense. Hence visitors get to enjoy High Tea as a collection of happy rescue cats lounge languidly or stroll aimlessly among the guests. Unlike some cat cafes around the world, Lady Dinah’s only have nine cats, believing that any more would create a tense and non-harmonious environment. A cat carer is on hand to tell you which cats are playful and like a cuddle and which ones are more stand-offish. There is a small cat welfare cover charge included in the cost of High Tea. Each visit is limited to 90 minutes and booking is advised.

Your opinion on this tiny temple, tucked away in Tokyo’s sleepy Setagaya Ward, will be influenced entirely by your feelings on maneki neko, the ubiquitos  ‘beckoning cat’, seen in the windows of Japanese restaurants around the world. If you think he’s cute, you’ll love it. If you think there’s something vaguely threatening about his unblinking stare and relentless clockwork arm, it is a place of nightmares. 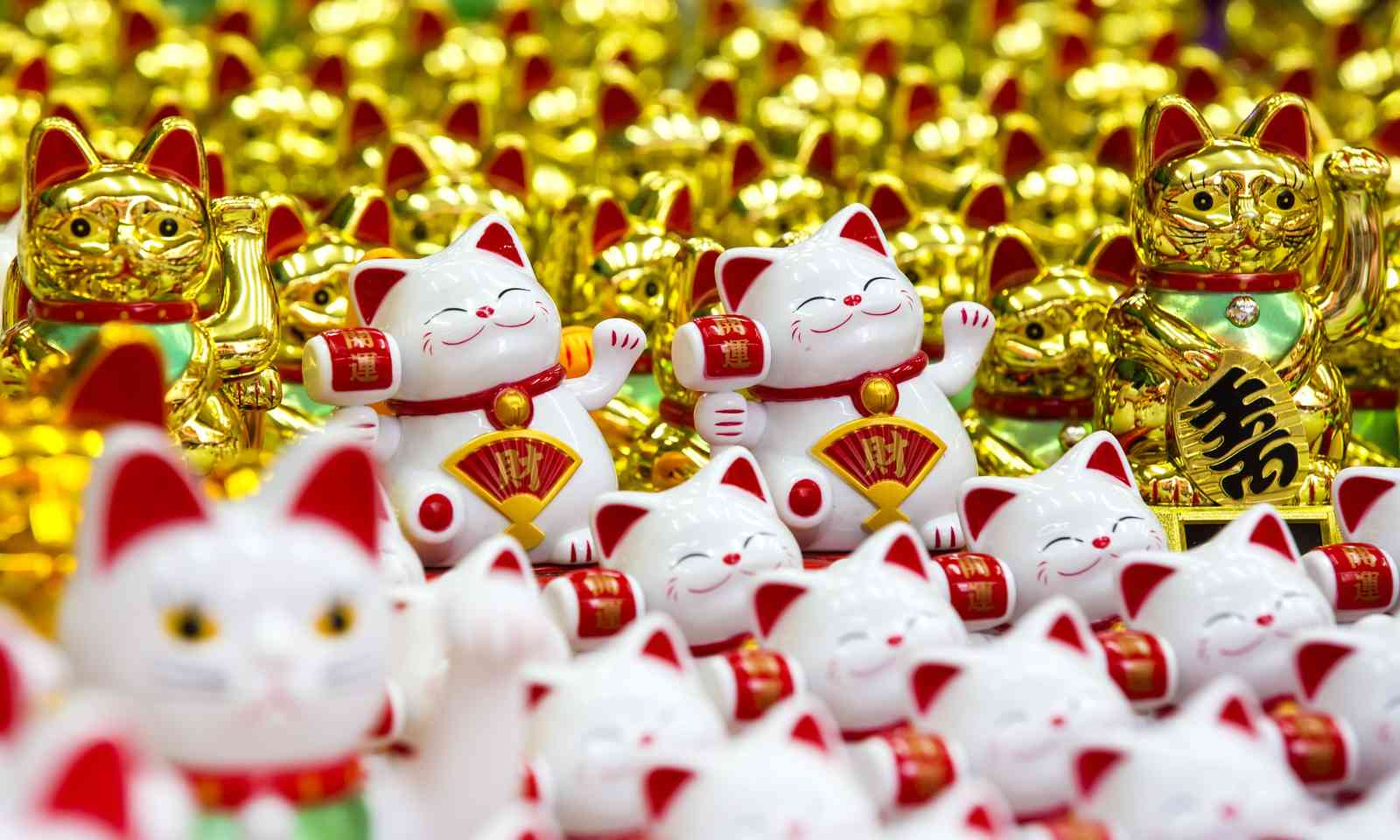 Built on the site where the original maneki neko beckoned a passing feudal lord to shelter from a thunderstorm, Gotokuji has become a place where people offer replica figurines as a sign of gratitude. The Japanese must have a lot to be thankful for – they are stacked high and wide in every nook and cranny. They're even on the ema boards, where you can write and hang your wish for it to come true.

Named after a local fruit called ‘Cat’s Eye’, the Malaysian city of Kuching in Sarawak, Borneo, has embraced its tentative feline heritage to become the world’s first cat-themed city. You cannot swing a cat without hitting an oversized cat sculpture or similar feline-themed piece of public art. 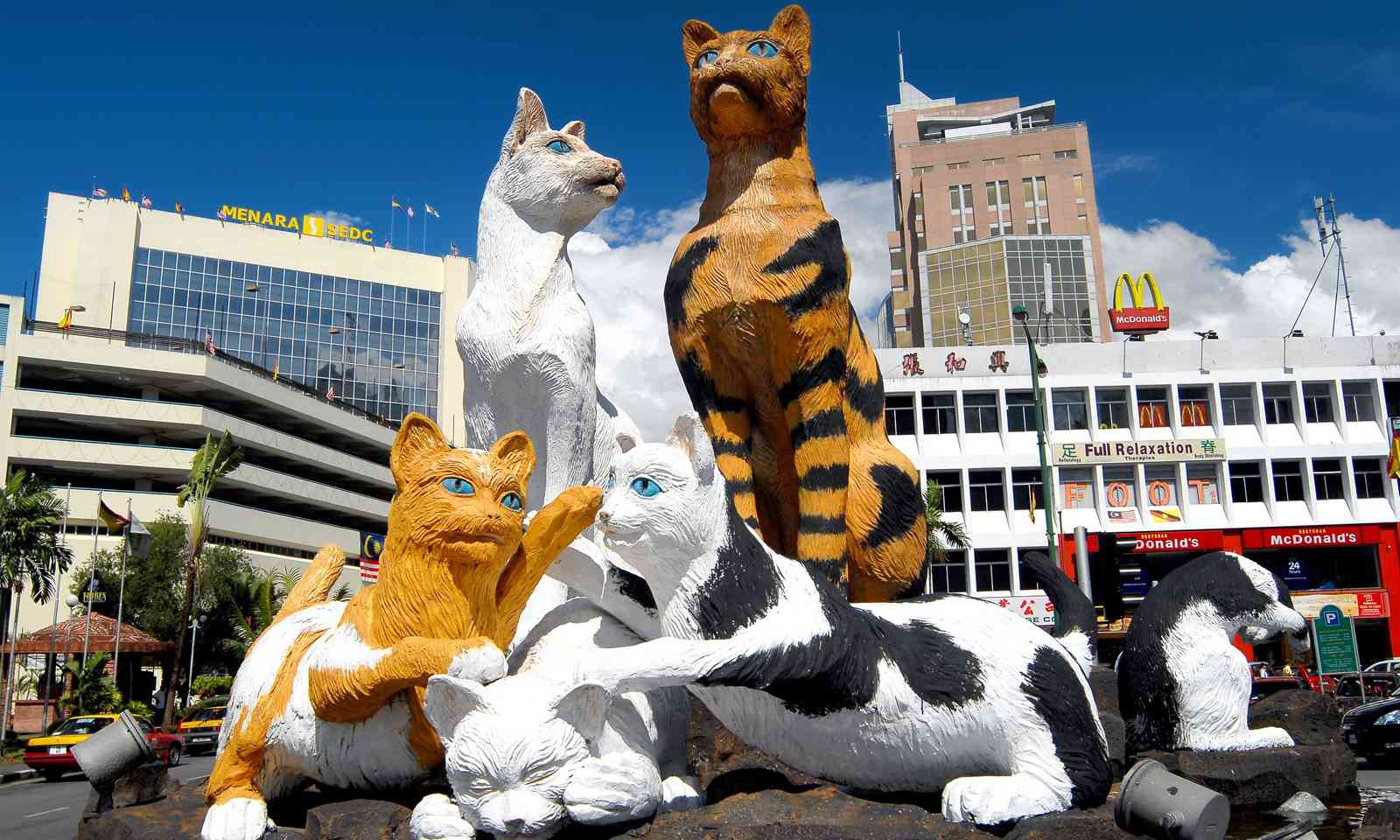 There’s a Cat Museum, of course, reached through the gaping jaws of a giant cat and home to 2,000 artifacts, including an Egyptian mummified cat. And a cat café, Meow Meow Café, where you are served two meals, one for you, the other to feed to the resident cats. The local radio station is called CATS FM and there’s a research centre that focuses solely on cat-based religions and cat history.

Hard-living author Ernest Hemingway was a man’s man. He liked drinking. He like fighting. But he adored cats. He was so smitten by kittens that he called them ‘love sponges’.  His unashamed favourite was a six-toed Maine Coon named Snowball. 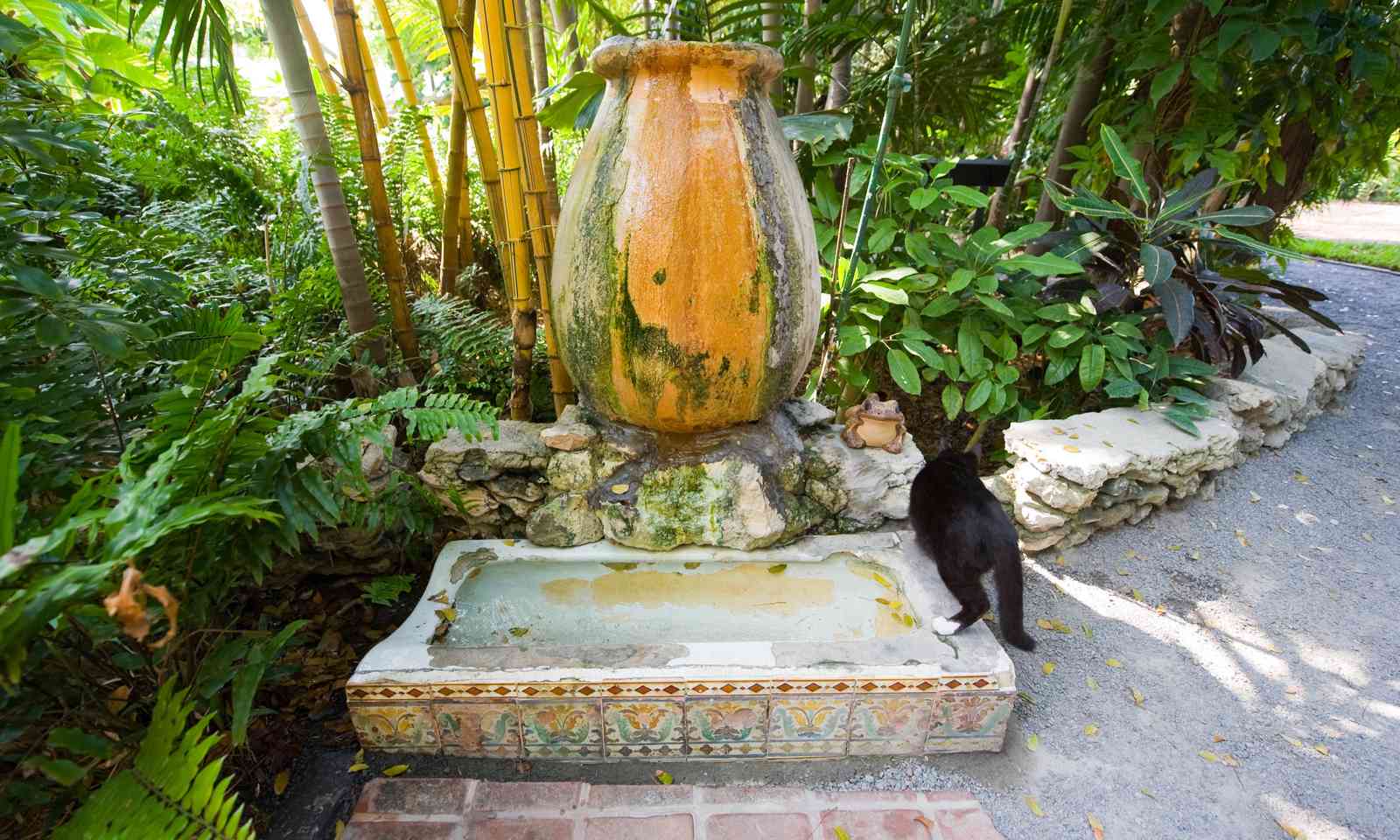 Dozens of Snowball’s descendants still live on at Hemingway’s estate in the heart of Old Town Key West. Now a historic museum, Hemingway stipulated in his will that they were not to be moved, and now they wander around the grounds as if they own the place.

Make sure you check out their preferred drinking fountain. It’s an old urinal that Papa Hemingway lugged after a night on the tiles at his favourite bar.

Main image: Japanese lucky cat on top of a temple in Tokyo (Dreamstime)