5 things to do in Dakar

The Senegalese capital is a riot of colour, sound and smells and the epicentre of modern African history. Here’s how to get underneath the city’s skin.

Dakar is not exactly mountainous. Just two pimple-sized mounds known as the Deux Mamelles (two breasts) decorate a city that mostly runs flat to the coast. Out of one of these rises the largest monument in Africa, a 49-metre-high copper behemoth, and yet nothing divides local Dakari more. 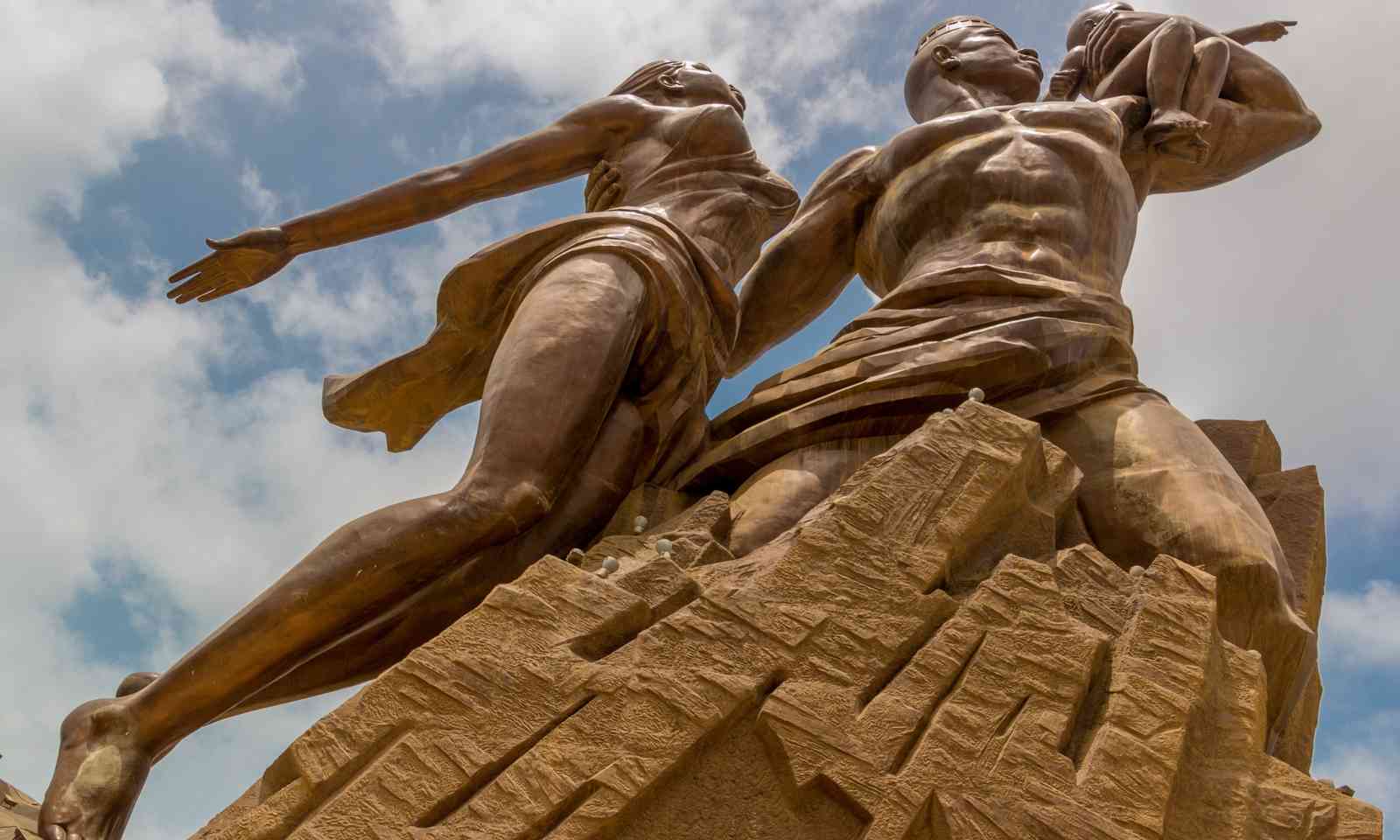 The monument was the brainchild of former Senegalese president Abdoulaye Wade and took eight years and around 30 million euros of public money to build. “It is still quite controversial,” blushed our guide. Yet for all the controversy and its rather sexed-up Stalinist feel (it was constructed in North Korea), it remains breathtaking in its size and sheer ambition.

From the outside, the monument depicts a heroic-looking couple clutching a baby. A 6,500CFA (£8.30) fee gets you inside, and while there’s not much to see exhibit-wise, the trip up to its 15th floor is unmissable. From there, a 360-degree window (which forms a band atop the head of the male figure) brings the dusty sprawl of central Dakar into focus as you squint through the eyes of giants. Unforgettable.

Getting there: A taxi from within Dakar to the Monument de la Renaissance Africaine will usually cost (after bartering) between 1,500 and 3,000CFA (£2-4).

The shadow of colonial rule and the brutality of the slave trade casts a pall over Dakar, in particular its UNESCO-listed island of Gorée. Back in the 18th century, more than 20 slave houses darkened its streets and, while many have been left to ruin (and opened to wanderers), any visit here should begin at La Maison des Esclaves where the sobering story of life in these places is told with real power, as you glimpse through its famous sea-facing doorway – the last sight of home many Africans saw as they were taken to the slave ships. 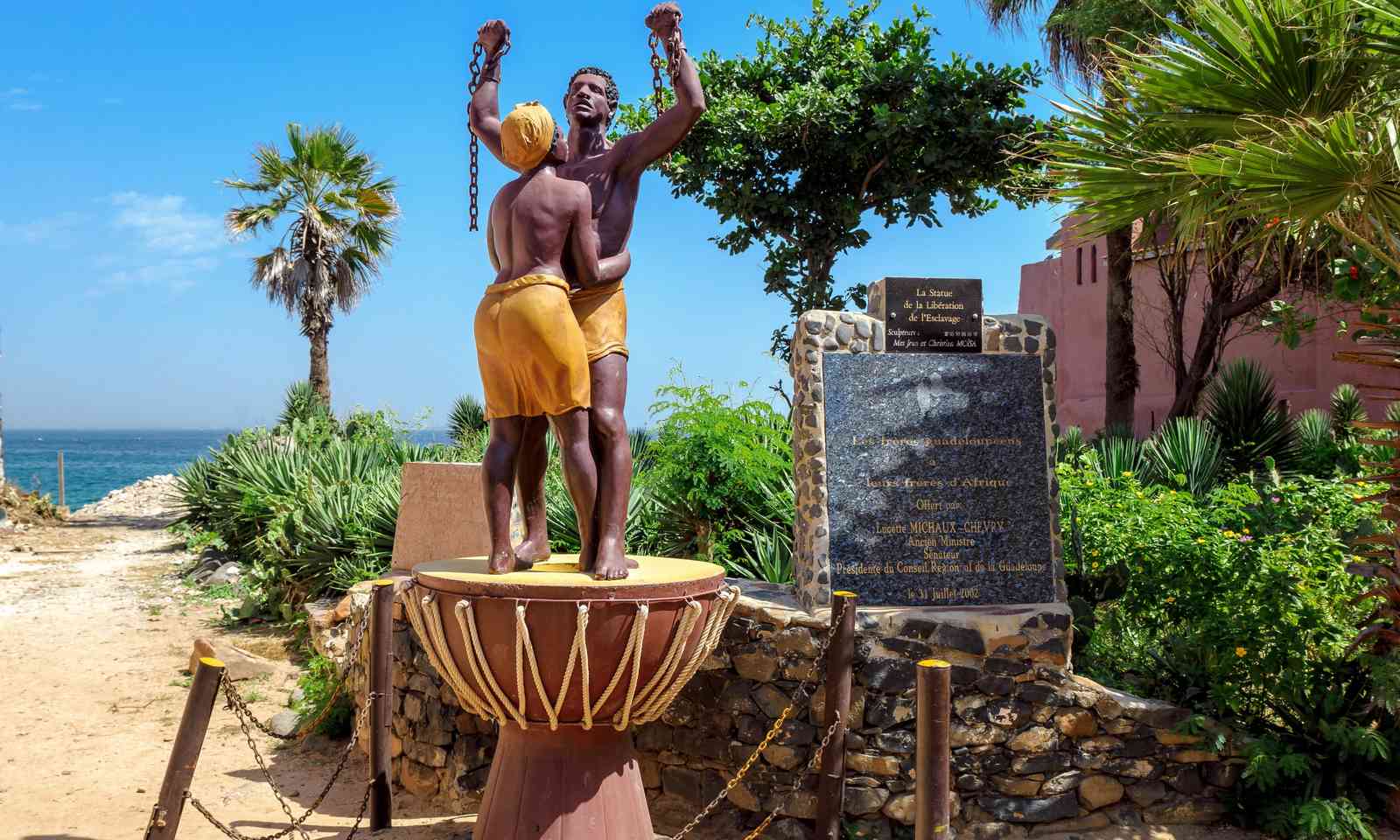 Elsewhere, strolling the crumbling colonial architecture of Gorée is addictive. Artists border the paths leading up to its Castel (built by the Dutch in the 17th century), with its huge guns added during World War II and now left to rust in the hot salt air.

Explore side-streets and squares, wandering the abandoned ruins of old hospitals, dispensaries and residences, many of which afford stunning hidden views. But the best of these is reserved for the circular fort of D’Estreés; climb its steps to glare out across sun-kissed waves or back over the crumbling colonial facades below.

Getting there: Ferries sail regularly from Dakar port to Gorée from 6.15am and take around 20 minutes. Tickets cost 10,200CFA (£13) per person.

While the famed Paris-Dakar Rally has ground to a halt in recent years, life at its former finishing post of Lac Rose continues as usual for the workers along its shores, as they heave huge baskets of salt from their colourful pirogues. But there’s more to these waters than industry alone.

The saline content in the lake can be as high as 40% (more than in Jordan’s Dead Sea), which means you simply can’t sink. Bobbing atop its waters, legs and arms splayed, is mandatory, and if you arrive for late afternoon you can enjoy the lake’s other party piece: when conditions are right, the water’s algae starts to bloom and the whole thing turns a shocking pink colour. It’s akin to floating in a giant, warm raspberry sorbet.

As you submerge your body, any cut and scrape will really sting, reminding you that ten minutes bathing is enough. Salt harvesters protect themselves from the corrosive salt by covering their bodies in oil and shea butter, but the lake’s ‘dipping zone’ has fresh running water to wash yourself with afterwards, so try to stay around there.

Getting there: A 40-minute taxi-ride will take you from central Dakar to Lac Rose; expect to pay around 20,000CFA (£25) to hire a driver to wait and bring you back.

Local legend says these tiny volcanic islands, off the south-west coast of Dakar, are home to the spirit that protects the capital – certainly the sight of the huge Spanish trawler that beached on its rocks some three years ago is ample reminder of the perils of ignoring such powers.

Make your visit on a Tuesday or Thursday and you even can join the local Dakari who visit to make sacrifices at the baobab tree that lies at the centre of the main island (Sarpan). But, for most visitors, the chief attractions here are more natural than spiritual. 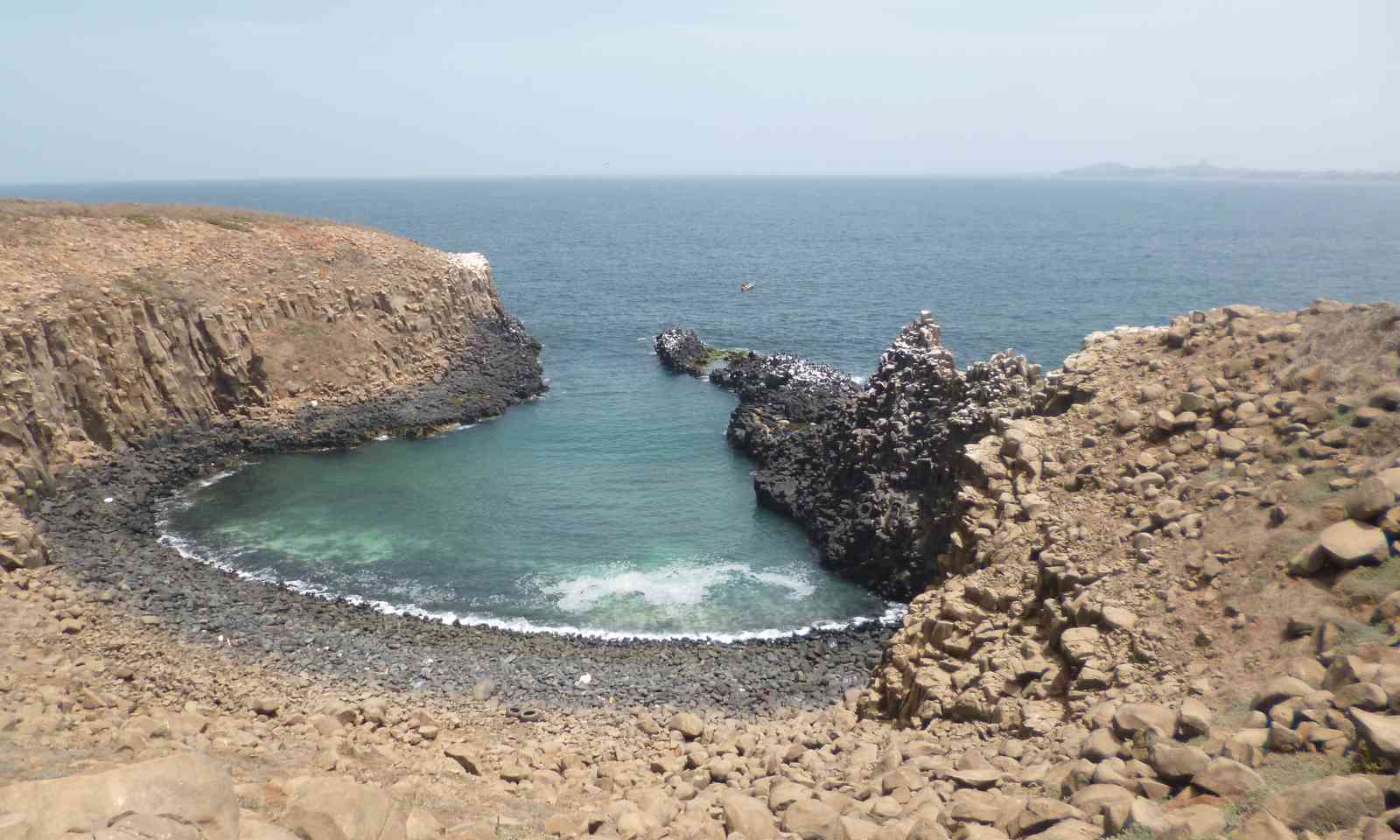 Today, the islands are run by Senegal’s National Park Service as a wildlife sanctuary, with ‘agents’ doubling up as guides and guards (illegal fishing is an ongoing issue). Boats unload day-trippers in the bay of Sarpan, where a natural swimming pool makes for some fine snorkelling.

From there, trails circle its cliffs, passing sprawling dwarf baobabs and black-scorched outcrops of volcanic rock that swarm with birdlife, from giant white pelicans and gangs of dive-bombing cormorants to the rare red-billed tropicbird. A wild, idyllic escape.

Getting there: Boats to Îles de la Madeleine depart Dakar’s National Park Office from 9.30am and take around 10 minutes. Visits cost 7,500CFA per person (includes permit, guide and boat), with stays during the week limited to a maximum of four hours (all day at weekends).

Nightlife in Dakar is not known for its modesty. Hip-hop levels of bling are de rigueur in many places, as are gaggles of tightly-clad girls all skittering on skyscraper heels, but it has to be experienced. Nights are soundtracked to the pounding rhythms of mbalax, Senegal’s ubiquitous dance-Latin-funk-reggae hybrid, which bursts from every stall, taxi and window, lending the city a rhythm of its own. 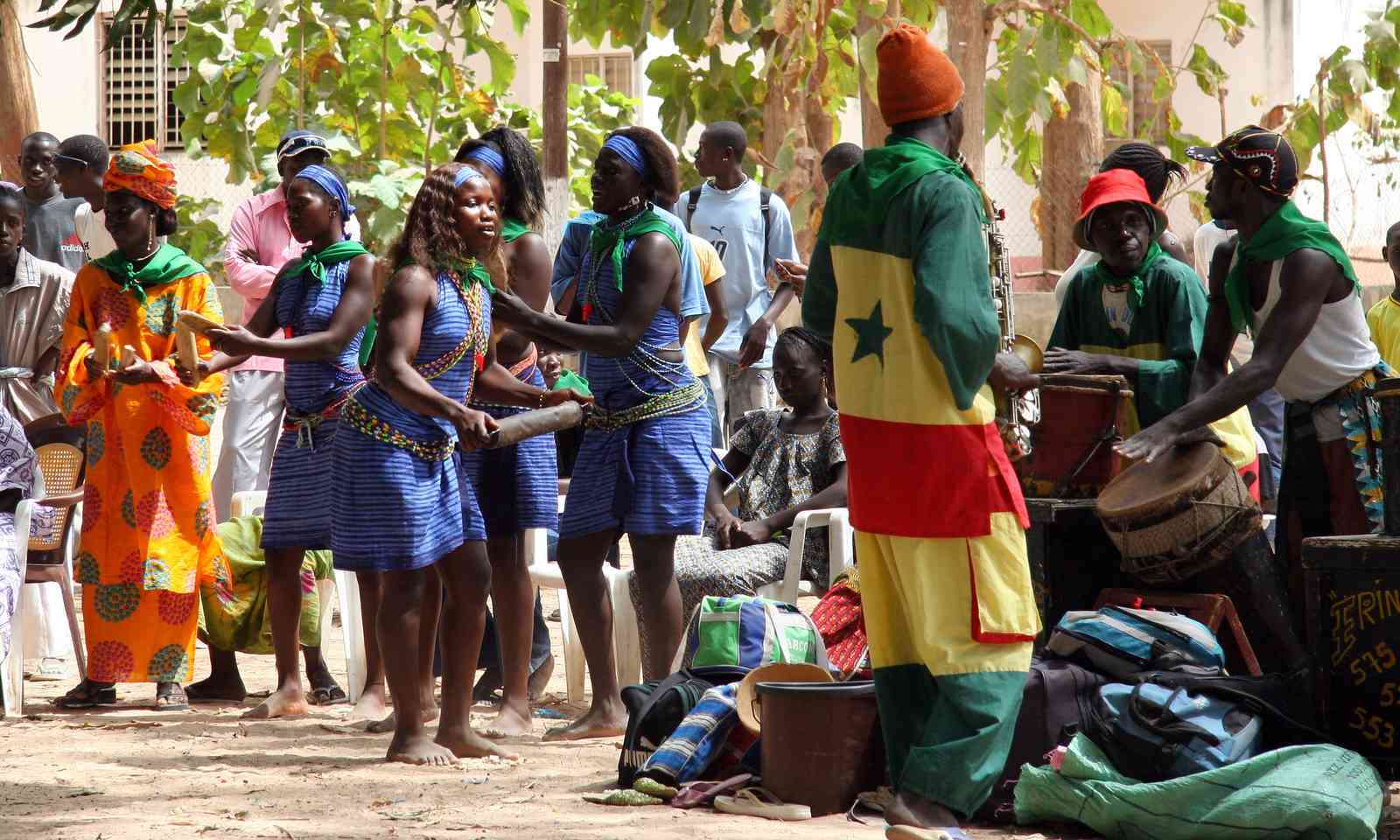 Music on the streets of Dhaka (Shutterstock.com)

You’ll find a lighter introduction at Just 4 U (Ave Cheikh Anta Diop, Point E); this garden restaurant is home to regulars Orchestra Baobab and even, on occasion, Dakar’s favourite son, Youssou N’Dour, who has his own famously glitzy club, Thiossane (Rue 10), in which he performs at weekends.

At the showier end of the scale, K Club (Route des Almadies) is the kind of place where rappers share overpriced bottles of liquor with footballers: pure excess and utterly unashamed. Leave your judgement at the door and just soak in the atmosphere, then scuttle home in the wee hours for a breakfast of pastries at the city’s beloved patisseries alongside everyone else.