The Muslim holy month of Ramadan begins tonight, but if you're in the United Arab Emirates you can still explore its capital

The month of Ramadan is a time for spiritual reflection, self improvement and increased devotion in Abu Dhabi. Emirati Muslims fast during the hours of sunlight, working hours are decreased and they are encouraged to read their holy book, the Quran. However, as 70 per cent of Abu Dhabi's population are expats, there are still some daytime activities available. And at night, when the Ramadan fast can be broken, the place comes alive. Here are five things to do in the capital.

1. Visit the beaches along the Corniche 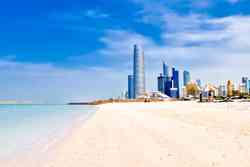 The beaches along the Corniche, Abu Dhabi (Shutterstock)

Abu Dhabi’s beachfront promenade – known as the Corniche – is bordered by parks and gardens on one side and fine white sand on the other, which attract 40,000 visitors every month.

Summer temperatures can hit 45°C, but if you go around 5pm – about two hours before the sun sets and the beaches close – you’ll avoid the midday heat.

There are beaches dedicated to families and singles and a free public one. There are more than 1,100 free parking spaces with a five-minute walk.

You can also cycle along the seafront, stopping to rest at smoothie shops, cafes and restaurants. While many of these are closed during the day during Ramadan, some open after sunset. 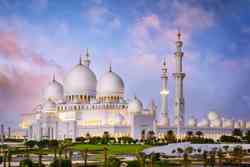 During Ramadan there is no afternoon tour, but you can still join free tours from 10am. Around 30,000 flock to the mosque every night during Ramadan for a free iftar – a nightly feast – which starts after sunset. 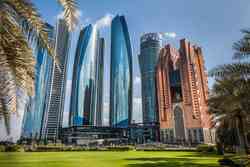 If 30,000-strong queues at Sheikh Zayed Grand Mosque don’t appeal, you can join iftars at hotels and restaurants across the city whether or not you have fasted during the day. Most are served as a buffet or set menu. Li Beirut at Conrad Abu Dhabi Etihad Towers is among the best.

An iftar usually begins with dates and Arabic coffee followed by soup, rice and salads – but pace yourself, as platters of grilled meat comes next. Iftars are an opportunity to try traditional Emirati dishes such as roasted camel, tagines and lamb ouzi (spiced lamb and rice). 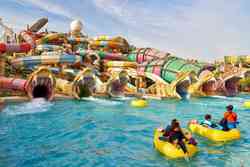 The UAE’s first waterpark, on Yas Island, covers 15 hectares. The park has 43 rides and slides including the world’s longest and fastest tornado water slide, the region’s first looping water slide and the world’s first interactive water and laser roller coaster. 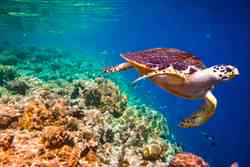 The waters around Abu Dhabi are teeming with life, so look out for Arabian angelfish, barracudas, dolphins and hawksbill turtles. Top sites include the reef off Saadiyat Island, close to the city, and off Sir Bani Yas Island, three hours’ drive south of the capital.

Ocean Dive Center runs diving trips to coral reefs, artificial reefs and wreck barges throughout Ramadan. It caters to all levels, guiding dives to depths ranging from 8m to 17m. Most packages include equipment hire and drinks.

Beth & Gaz are from Yorkshire, England. They blog at enjoythejourney.org.uk