5 of the world's scariest Halloween hangouts

Fancy an extra frisson of fright this Halloween? These five scary spots around the world will send shivers down your spine...

Known as La Isla de la Munecas by the Mexicans, this small island, hidden within a network of canals south of Mexico City, is sure to give you the creeps. Almost every tree on the island has mutilated dolls hanging from the branches, making you feel as though you're being watched from every angle.

The story behind these creepy scenes starts with a hermit called Don Julian who moved to the island, where he spent the last 50 years of his life. Don Julian was haunted by the spirit of a girl who drowned in one of the canals and collected dolls and scattered them around the island to calm the tormented spirit. Don Julian was found dead, after drowning in the same canal.

Visitors to the islands have claimed that the dolls whisper and you must offer a gift to them once stepping foot on the island to appease their spirits.

The underground vaults of Edinburgh are said to be home to many spirits, and paranormal activity here is high. The vaults themselves were once used for storage, but were soon abandoned due to leaking walls. A population of poverty, disease and prostitution soon took over and many squatters were left to rot on the damp floors.

The vaults are home to a mixture of Edinburgh's oldest ghostly residents, from Mr Boots, a nasty piece of work who pushes people's shoulders and whispers obscenities in their ears, to Jack – a small boy who tugs trousers and throws stones around the echoing tunnels. Recordings of old Scots Gaelic have been taken in the vaults and a cobbler has been photographed reclining in a corner.

A night in the vaults is not for the faint-hearted, however, people have come out with inexplicable bruises and injuries, as well as experiencing the fright of the lives.

Aokigahara, better known as Suicide Forest, is a sea of trees at the base of Mount Fuji where over 500 people have wandered in, never to be seen again. The trees in this popular suicide spot are so thick, that wind does not pass through and even at midday the floor is shrouded in darkness. 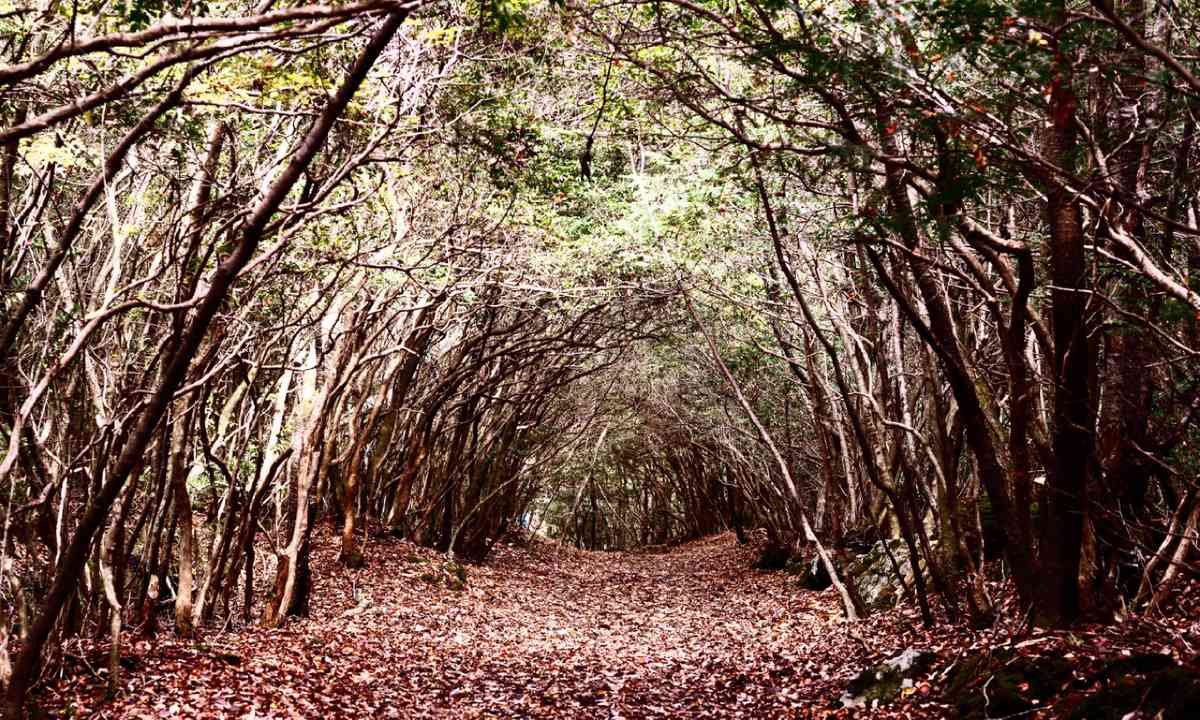 The Japanese government have taken it upon themselves to do an annual sweep of the forest for dead bodies. In 2002, 78 were found. According to Japanese superstition, if a dead body is left by themselves after suicide, the Yurei (Japanese spirit of the dead) will howl and scream continuously. These ghostly white forms are often seen flitting between trees by unsuspecting visitors.

For anyone who does decide to take a trek through Suicide Forest, beware, compasses are said to rarely work within the forest due to massive underground iron deposits. Or paranormal activity, we'll let you decide.

Enter into this small chapel in the suburbs of Kutná Hora and you will soon discover why it is named, The Church of Bones. The interior is adorned with between 40,000 – 70,000 human skeletons dating back to the 1200s, artistically arranged and sculpted in 1870 by František Rint, a local woodcarver, whose name hauntingly remains inscribed in some of the bones. 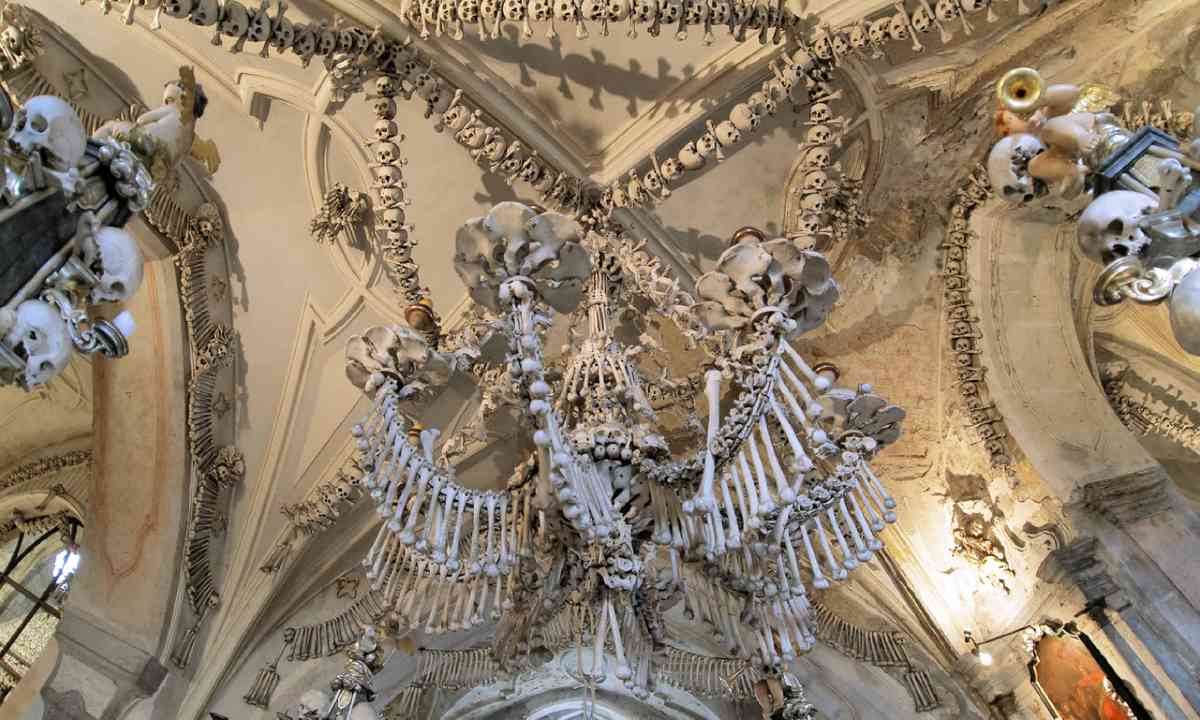 Chandelier made of bones and skulls in Sedlec Ossuary (Shutterstock)

Looming forbiddingly over the centre of the church hangs Rint's most astounding creation – a chandelier boasting an impressive structure and composed from nearly every bone of the human body.

The ceilings of the ossuary are draped with rows upon rows of skulls and bones, while in the corners of the church stand six towering bone pyramids. In addition to this, you can find a family coat of arms – intricately created entirely of bone – large bone chalices and skull candle holders.

This is an eerie gallery of the dead that is not for the faint-hearted or those with a weak stomach. Thousands of mummified bodies and skeletons line the walls of these catacombs like paintings, dressed in an array of outfits and positioned to look like they have lives of their own. 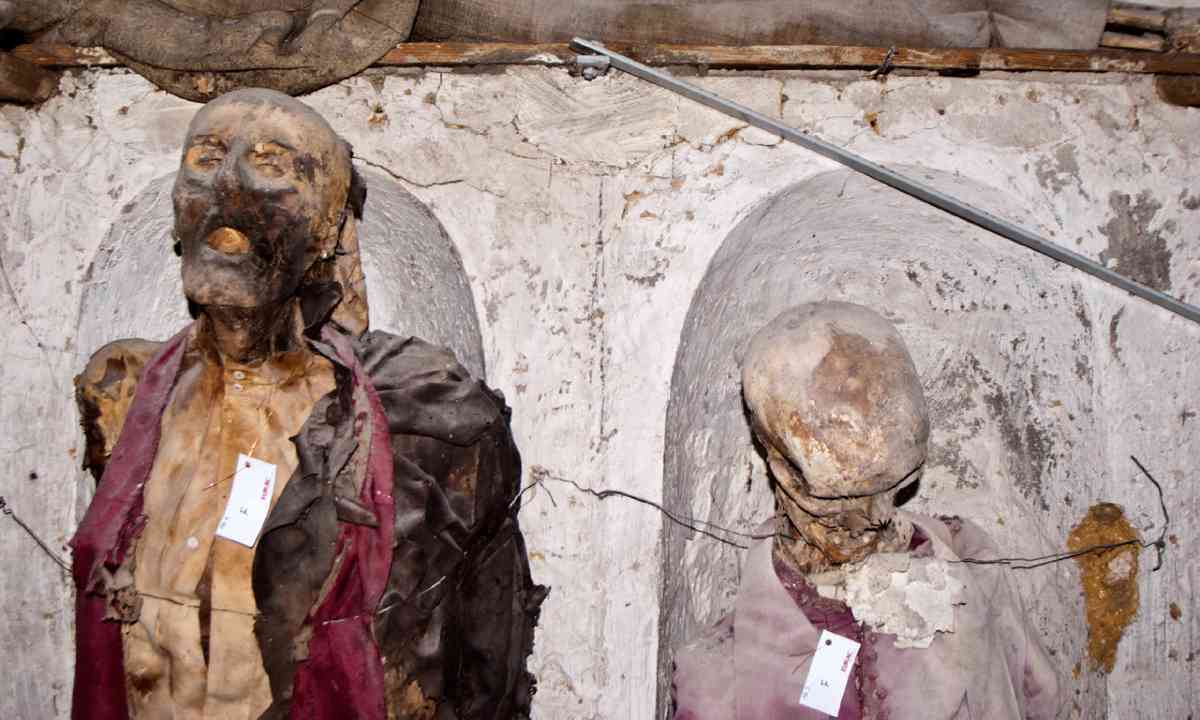 Catacombs of the Capuchins (Shutterstock)

For a bit of a shock, make sure you locate Capuchin's Sleeping Beauty, pristinely preserved behind glass, you'd be forgiven for thinking that she's just taking an afternoon nap – except she died from pneumonia in 1920.

The catacombs were started in the late 16th century when monks ran out of space in the cemetery. The climate in the underground space turned out to have perfect conditions for preserving bodies, so much so that some of the oldest skeletons still have skin and hair.