Ireland's rugged West Cork coastline has always felt like a land apart. Author Annemarie Neary reveals how – and where – to get under its skin

One of the most beautiful West Cork coastal villages, Baltimore is home to ‘The Algiers Inn’ whose intriguing name refers to an episode in the late seventeenth century when many of the town’s inhabitants were stolen away by Barbary pirates, never to be seen again. Nowadays, the same waters are host to flurries of kids learning to sail in little bath-tub Opis.

An ideal vantage point on all the maritime bustle can be found outside Bushe’s and Jacob’s bars on the Waterfront. Here, as in most parts of coastal West Cork, menus focus on chowders, mussels, crab, and the region’s excellent cheeses and cured meats. 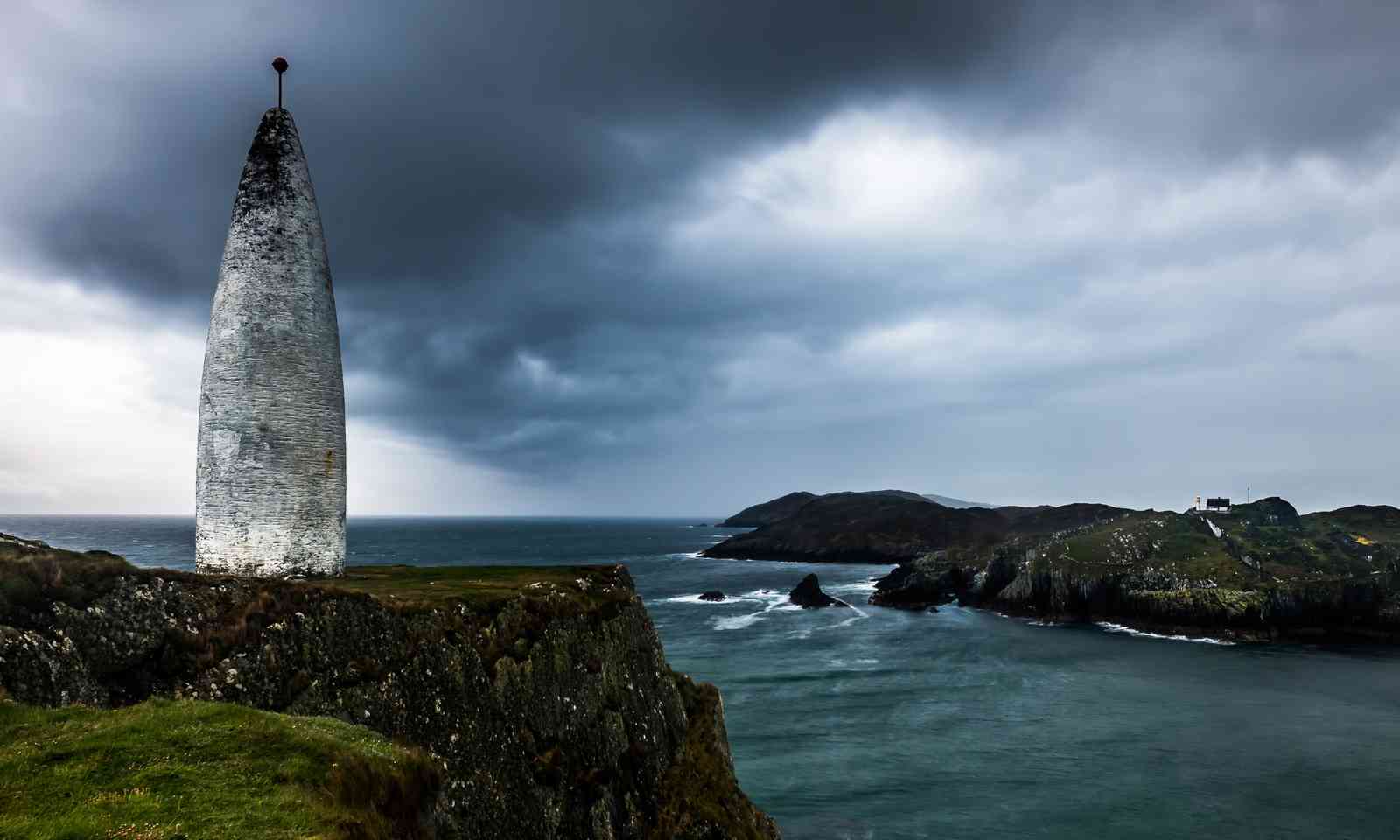 Walk off lunch with a walk out to the Beacon, known locally as Lot’s Wife, for superb ocean views. For those seeking more excitement, Whale Watch West Cork run trips out of Baltimore to the Atlantic side of Cape Clear, the deepwater territory of minke, fin and humpback whale; there is also deep water sea angling on offer locally, including wreck fishing and shark fishing.

Close to Baltimore, Lough Hyne is a much-studied saltwater lake that is connected to the sea by rapids and hosts more than 70 protected species of fish and sea urchins. This is a perfect spot for wild swimming between the two piers and perhaps a session in the mobile sauna that visits from time to time. Diving is allowed with a permit.

For those who prefer to stay on the surface, Atlantic Sea Kayaking run night safaris where, in peak summer season, participants can experience the phenomenon of bioluminescence, an evanescent pale blue glow on the black water, caused by the presence of phytoplankton.

After exploring the lake itself, take to the high ground to view one of West Cork’s most stunning features, the island-studded seascape of Roaringwater Bay.

Ferries operate from Baltimore to the largest populated islands, Sherkin and Cape Clear, but there is no substitute for your own small craft. Most of the islands lie in sheltered waters close to the mainland – a sailing dinghy or a simple boat with an outboard will do, either of which can be hired on a modest day rate in Baltimore or Schull.

Moreover, since most of the islands have been abandoned to cattle put out for summer grazing, no one is likely to be upset by picnickers or wild campers so long as they clear up after themselves. 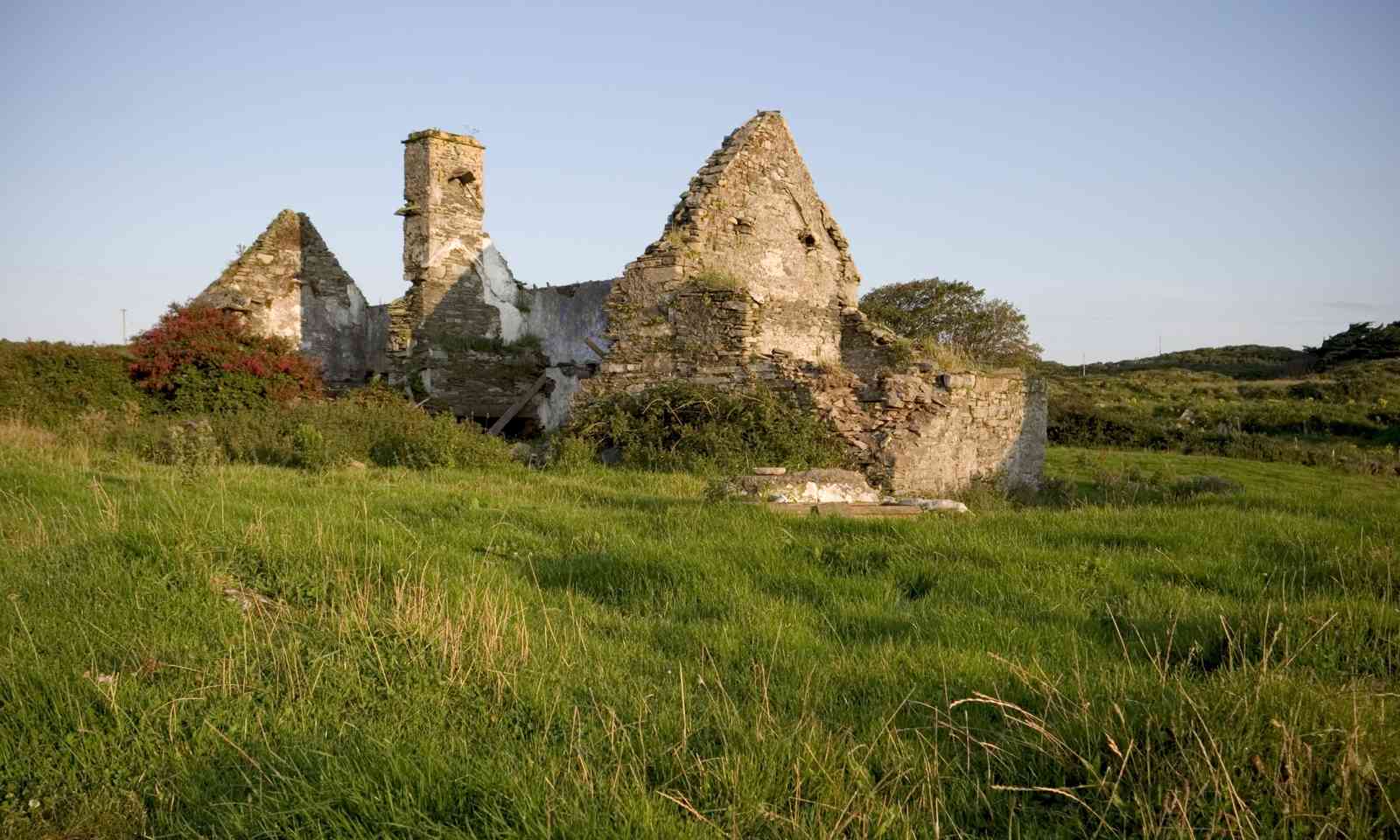 The unpopulated islands are beguiling places, with clusters of ruined houses the only reminder of past lives. On Hare (Hehir) island there is a small year-round community and the Island Cottage cookery school and restaurant, which serves an excellent, no-option set menu with soufflés a speciality. This can be reached in 10 minutes or so by ferry from Cunnamore Pier.

The character of Cape Clear, located 8 miles offshore, is somewhat different from that of the inshore islands. Once the last ferry leaves, there is a real sense of having left the modern world far behind.

For those who’d like to wake up here, there are rental properties, at least one B&B, and a small hostel, not to mention the well-appointed yurts and tepees that overlook the impossibly beautiful South Harbour. 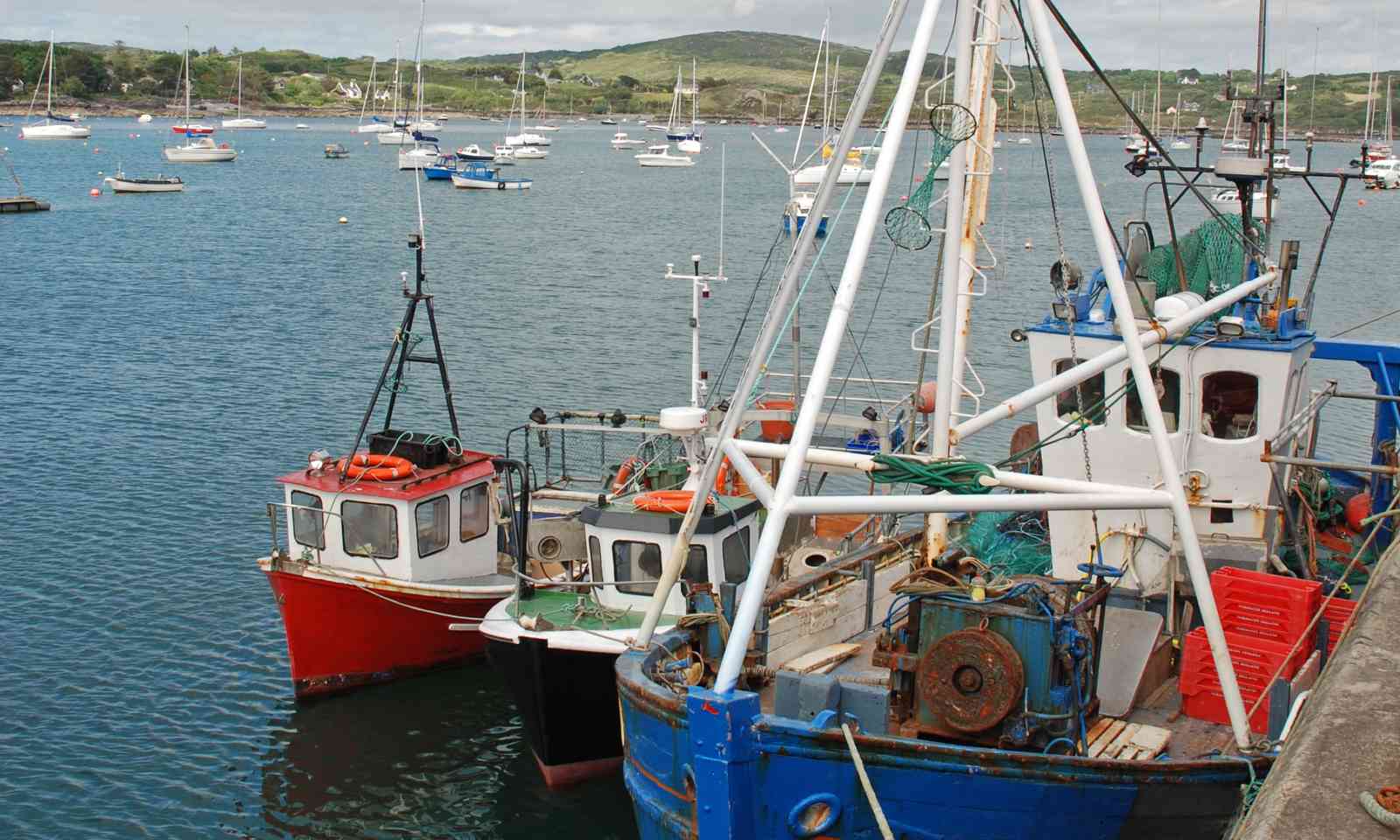 This is a Gaeltacht (Irish-speaking) island, and people come here to learn the language at one of the two summer schools, to visit the storytelling festival that takes place in September, to watch for migratory birds, or to participate in sailing and rowing events over the summer months.

But it’s also a wonderful place just to spend some quiet time, in the shadow of the Fastnet Rock and its lighthouse. A small museum on the island commemorates the tragic Fastnet race of 1979 when 15 crew were lost in a sudden and particularly ferocious storm.

Travel back from Cape to the little town of Schull, itself  well worth a visit – true to West Cork’s reputation for quirkiness, it boasts the Republic’s only planetarium. In the summer months, when it is bustling with visiting families, activities centre on the harbour and pier where there is an excellent seafood café, L’Escale.

The famous Colla Ring walk hugs the coast road, before rising to offer stunning island views, and loops back down into the village. Schull is also home to some of West Cork’s most famous cheeses – Gabriel, Desmond, and Gubbeen.

Start with a crab sandwich at O’Sullivan’s bar overlooking the water at Crookhaven, once an important staging and warehousing point for transatlantic shipping, now a tiny village with scarcely a trace of past glories.

Take a bracing hike up the dramatic Brow Head, Ireland’s most southerly mainland point, where Marconi carried out the experiments in wireless telegraphy that ironically brought an end to Crookhaven’s role in international shipping. Get there before the Star Wars: Episode VIII cast and crew, who are rumoured to be shooting there later this year. Next stop, Barleycove beach, whose dunes were created by a tsunami following the Lisbon earthquake of 1755, via its pontoon bridge and boardwalk, before landing up at Mizen Head with its spectacular bridge over wild seas and its lighthouse, now an excellent interpretative centre.  Not far away, on the road to Bantry, Blair’s Cove at Durrus has top quality accommodation and food.

A little further along, on the even less populous Sheep’s Head peninsula, stop off at The Tin House at Adrigole, whose eccentric interior and lush waterfront gardens make for an ideal pit stop after a hike on Three Castles Head, the peninsula’s crowning glory.


5. Glengariff and the Beara Way

Garinish Island is an entirely different beast from any of the islands in Roaringwater Bay. This is the epitome of planning and cultivation. The entire island is given over to a series of fantasy landscapes designed by Harold Peto in the years from 1910 with a clock tower, a Grecian temple, a Martello Tower, and an Italianate villa. It is situated in sheltered Glengariff harbour, just a 15-minute boat ride past a colony of basking seals.

For a contrasting approach to landscape design, visit The Ewe, also in Glengarriff, an innovative sculpture garden built into the mountain above the town. Designed with great imagination and wit, it combines games and art with abundant environmental awareness. Jewellery-making workshops are available at certain times of the year. 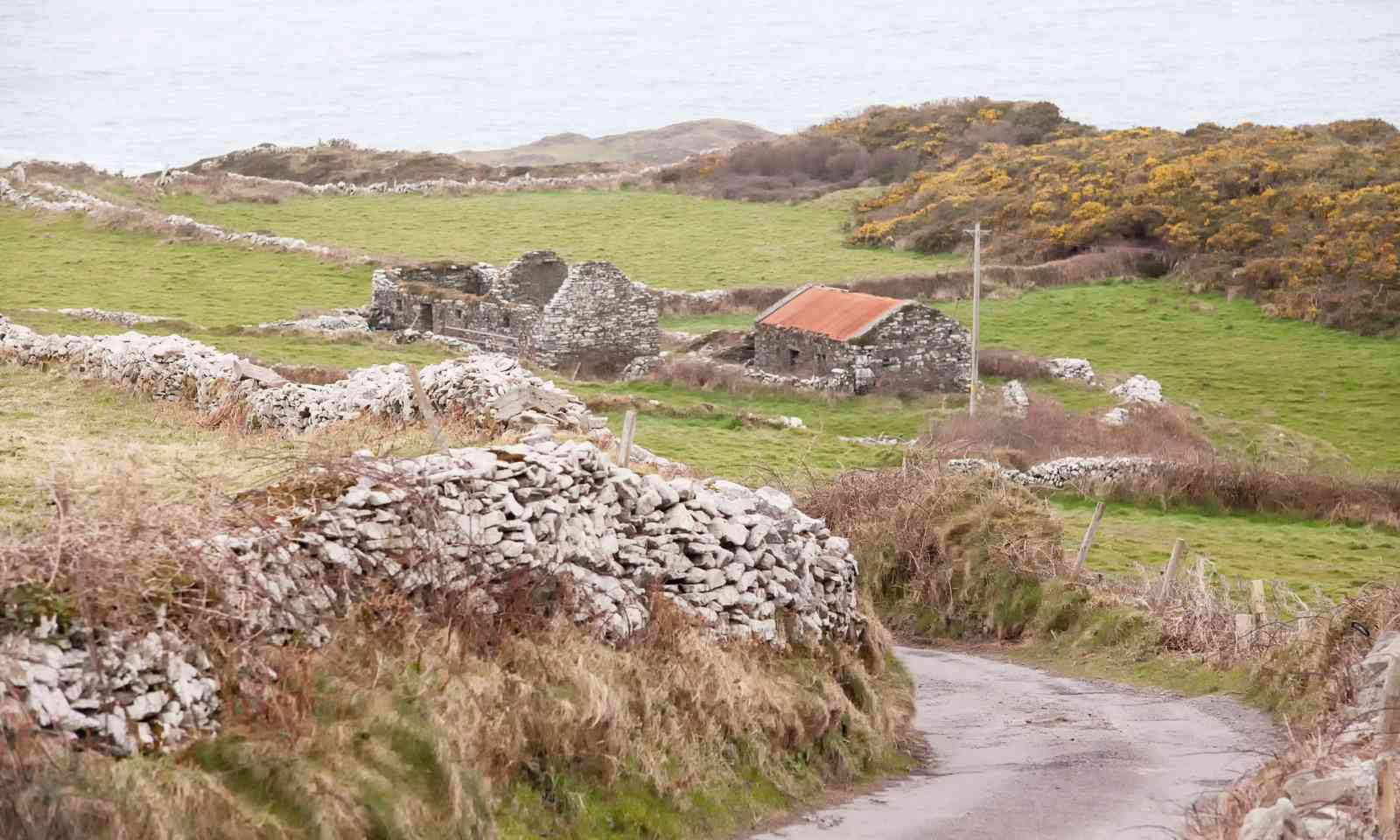 Glengariff is the gateway to the jaw-dropping Beara Way, a 206km circular route through magnificent scenery peppered by prehistoric sites: standing stones and burial monuments. There are many marked trails, and plenty of overnight accommodation around the former copper-mining villages of Allihies & Eyerie. Should you get to the end of the Beara Peninsula, don’t miss the trip out to Dursey Island in Ireland’s only cable car (and the only one in Europe over open sea) on the principle that sometimes it’s better to travel than to arrive.

Annemarie Neary's latest novel, Siren, is a psychological thriller set in post-conflict Ireland You can order your copy now on Amazon.