Danny MacAskill – Scottish trials cyclist and stunt biker – picks his 5 favourite mountain biking destinations around the world. Plus, check out his latest video Wee Day Out... 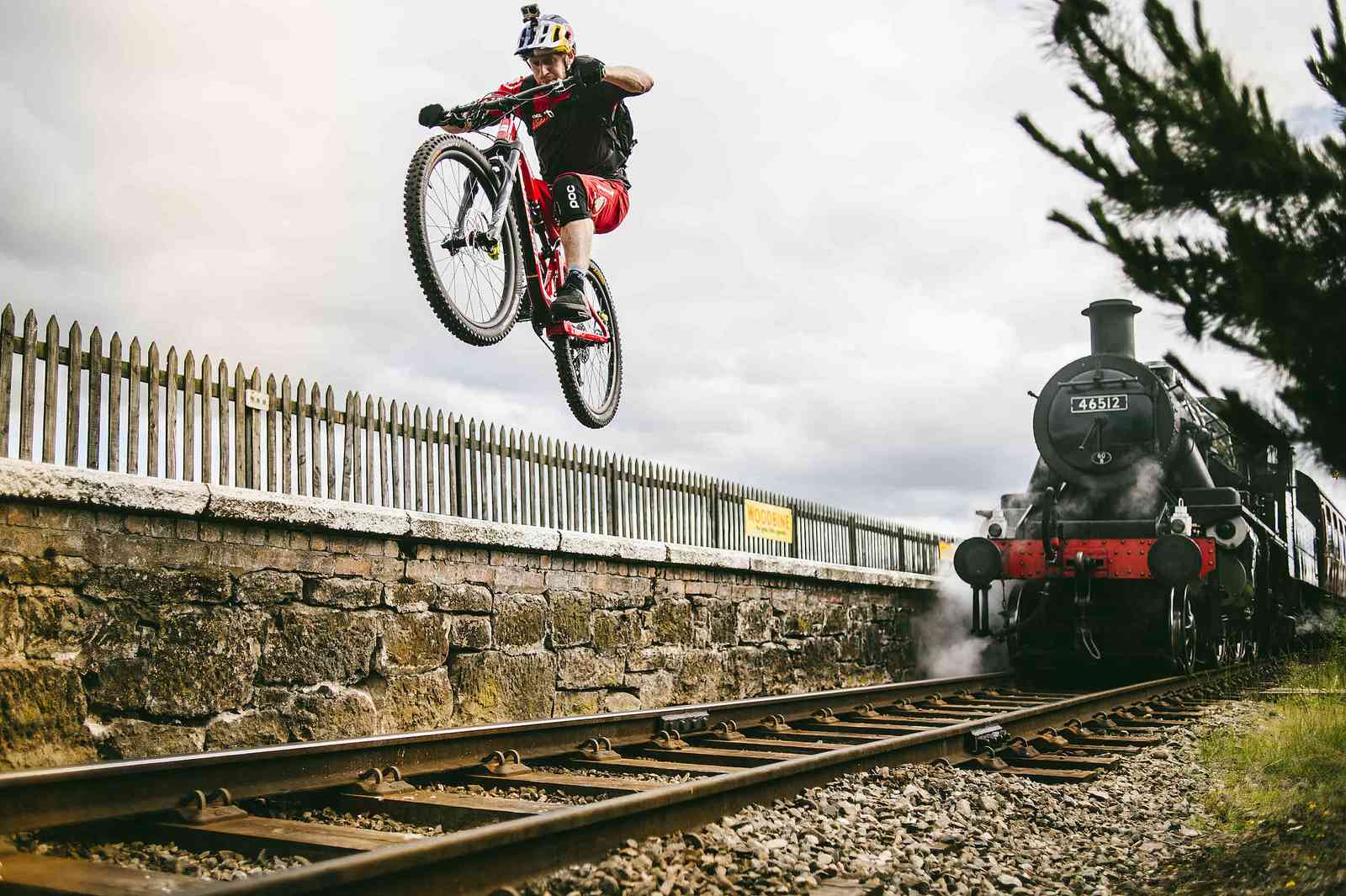 Scotland is home and the place I know best. I love riding in Scotland. The thing I love about Scotland is that you get this variety of riding.

My preferred locations within Scotland are Aberfoyle, which is around an hour’s drive from Glasgow. That’s where I ride a lot and that’s more steep, natural tech stuff. Dunkeld is, in my opinion, the next up-and-coming spot in Scotland. My friends are building trails there. It’s for someone with a little more expertise and somewhere where you can get stuck into some really cool trails.

I’ve been biking in Scotland for over a decade, and I’ve definitely seen a huge rise in the specific trail centers around the Borders. You have some really cool trails there that are easy to access for all levels.

I’m from the Highlands of Scotland, and that’s definitely got great riding. You’ve got Aviemore and the Torridon Hills, which is one of my favourite places. The terrain up in the Torridon mountains is big; the mountains and munros are a bit more rolling than they are on Skye, with softer edges on the hills, but with amazing paths that goes through the glens and up and over the passes of the Torridon hills.

I also love the Isle of Skye, which is close to my home. It’s somewhere I didn’t ride a lot until I was a bit older, but that’s really where you can do your two or three day bothy adventures and feel like you’re really getting away from everything. Skye, I think, has some of the nicest views in Scotland.

Scotland’s got a kind of romance to the landscape. You can turn a corner and it’s got this variety to it every time, and the landscape changes across the country, the Borders or around Edinburgh and Perthshire up to the Highlands where it gets more bleak and dramatic. 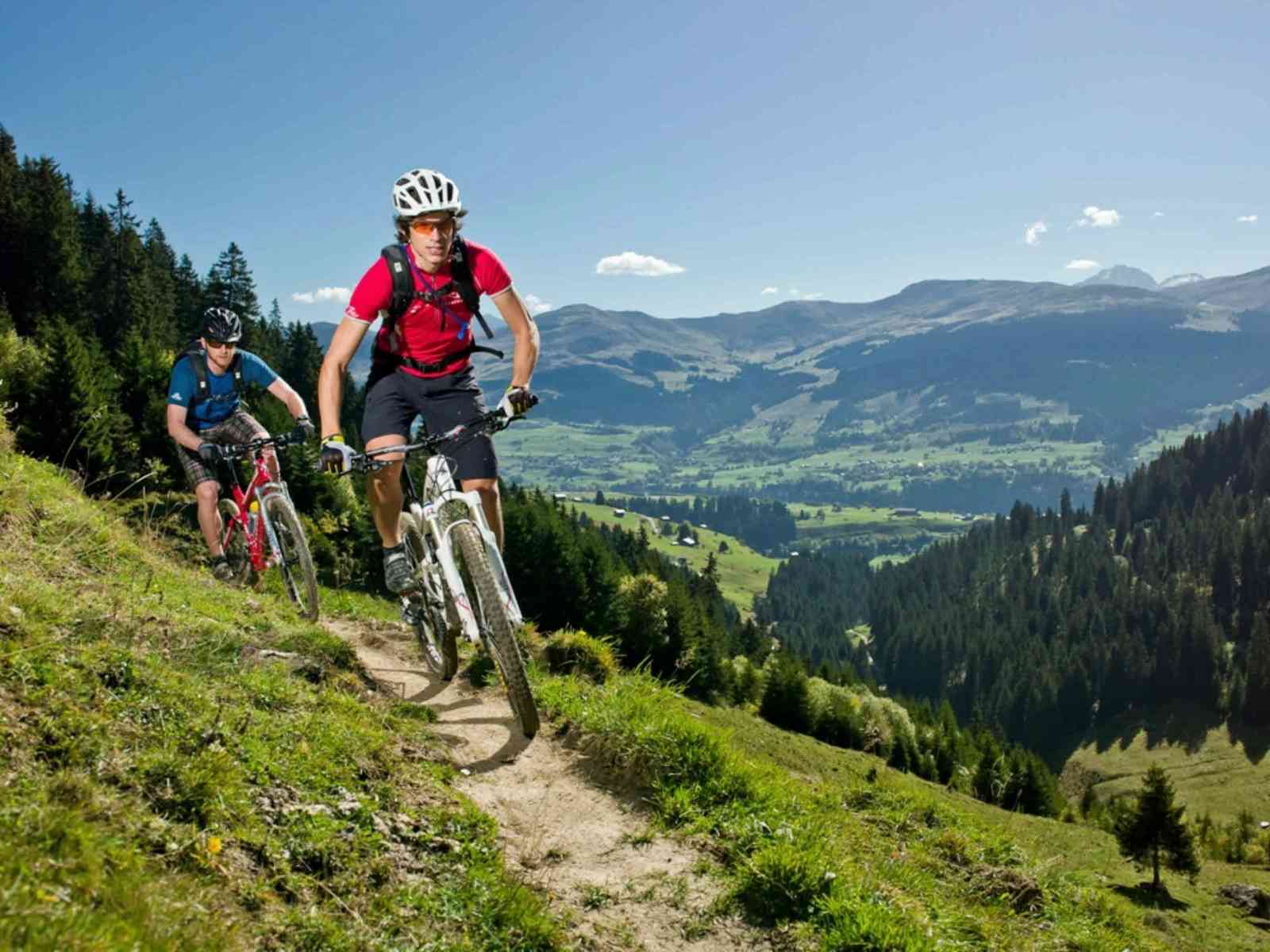 I’ve been spending a lot of time recently in the Graubünden region, in the east of Switzerland. Switzerland is very famous for it’s incredible scenery. The scenery is mind-blowing. I often found myself making comparisons to Scotland.

You have places like Davos, Laax, St Moritz…, and the mountains around these areas are just spectacular. It’s the Swiss Alps, and there are some of the Dolomites in the area.

The access to the trails is amazing. They’ve got trails all over the region and they’ve got an amazing infrastructure of lifts, so you can get up onto the tops. And when you’re on the tops, you can do these magical rides, where you stay up high and traverse from peak to peak - it’s not just straight descent. You can get straight descents if you want but there are really some cool loops and other stuff you can do there.

Another cool thing about the Graubünden region is that they have a way more relaxed system with the trail use. In other parts of Switzerland, it can be far more strict and you can only ride on certain tracks. But Graubünden is dual use. It’s best if you get up early to go and do it, so the tracks are clear. It’s a lot of fun. They have the flow trails and downhill tracks and bike parks, but I love the more natural paths out there. It’s amazing. You can do, like, an hour’s descent. 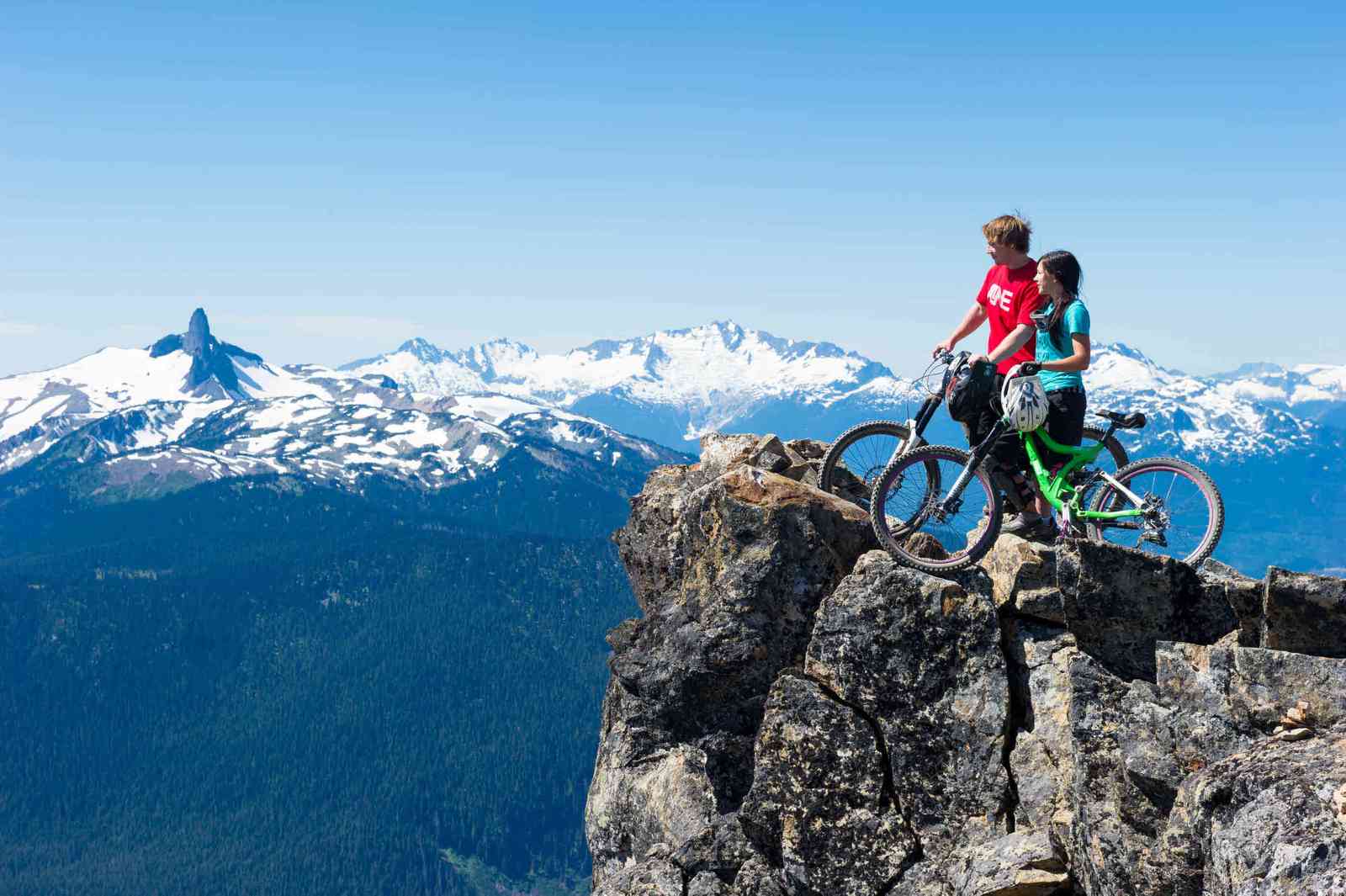 For anybody’s that’s ever got into bikes, this is one of the ‘must go to’ destinations in the world. The north shore of Vancouver has some of the legendary free ride trials in the woods, just north of the city. It’s famous for the beginning of the Freeride movement of mountain biking. There’s an amazing network of trails, from stuff that anybody can ride to some really extreme stuff. That’s an amazing place to go riding

If you go an hour and a half north of there, you’ve also got Whistler. Whistler’s got an amazing bike park; it’s a world famous bike park that’s got everything. But if you’re prepared to pedal (and more and more people are), there is also a huge network of trails you have to pedal up to get your descent. There’s a really amazing network all around there up around Whistler and also Squamish. It’s got some of the best trails in the world.

There’s wildlife in the area too. You might come around a corner and see a black bear on the trail. 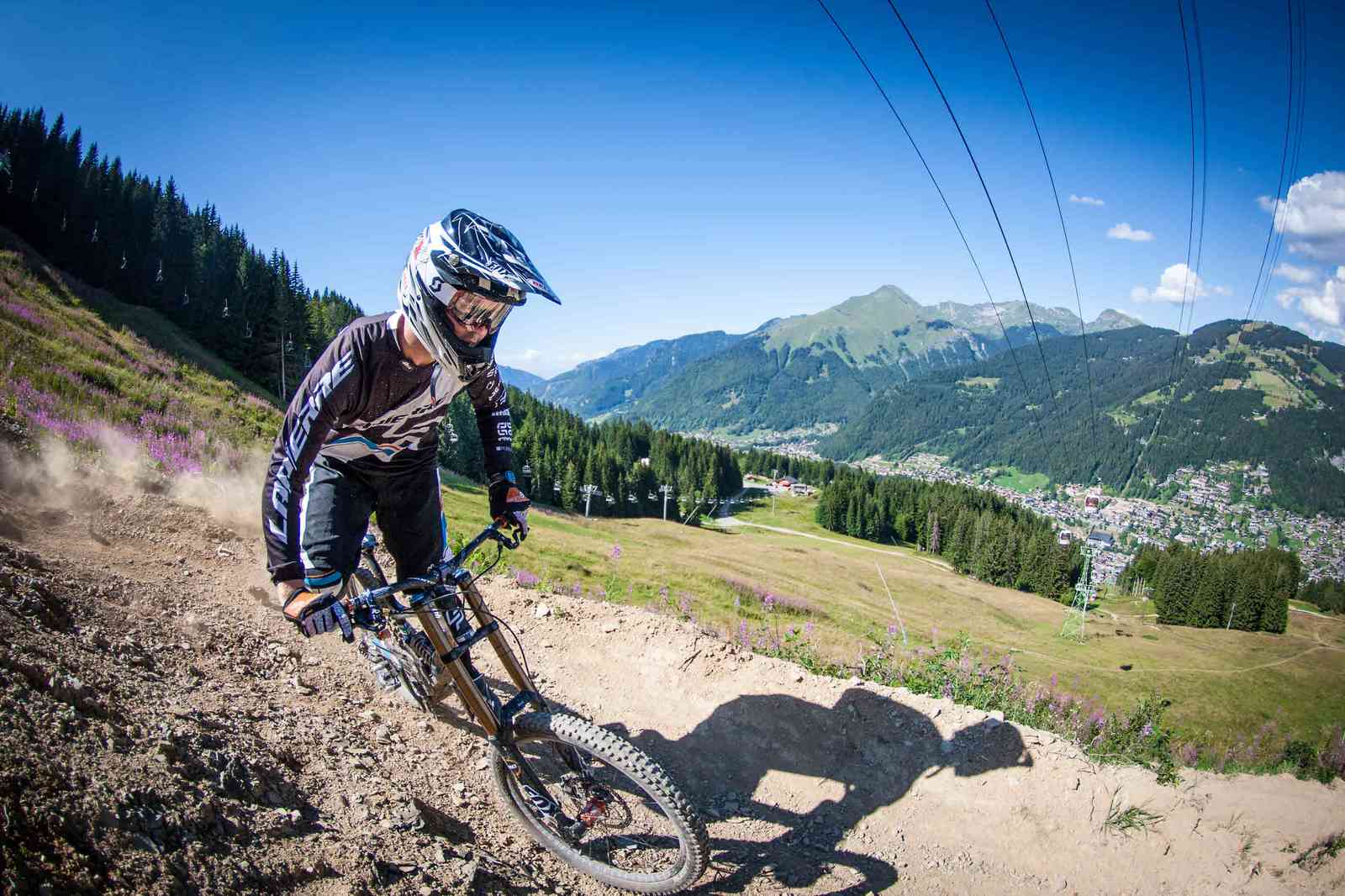 Mountain biker on the slopes of Morzine

Some of the best times I’ve had on a bike were probably in Morzine in France. It’s quite a common mountain biking place to get to from the UK, in the same way Chamonix has UK ties.

Morzine is definitely the kind of bike park destination that you go to for a week’s holiday with friends. It’s in the French Alps. You fly into Geneva, and it’s about an hours drive to get there.

Morzine is really good fun. It’s a bit like a taste of Whistler, but over in Europe.

You’ve also got places like Les Gets in other parts of the valley. I explored the area a bit. We cycled across to Les Gets. There are marked trails in the area and also local’s trails in the woods, which are my kind of scene, with steeper, loamy, rooty kind of stuff. 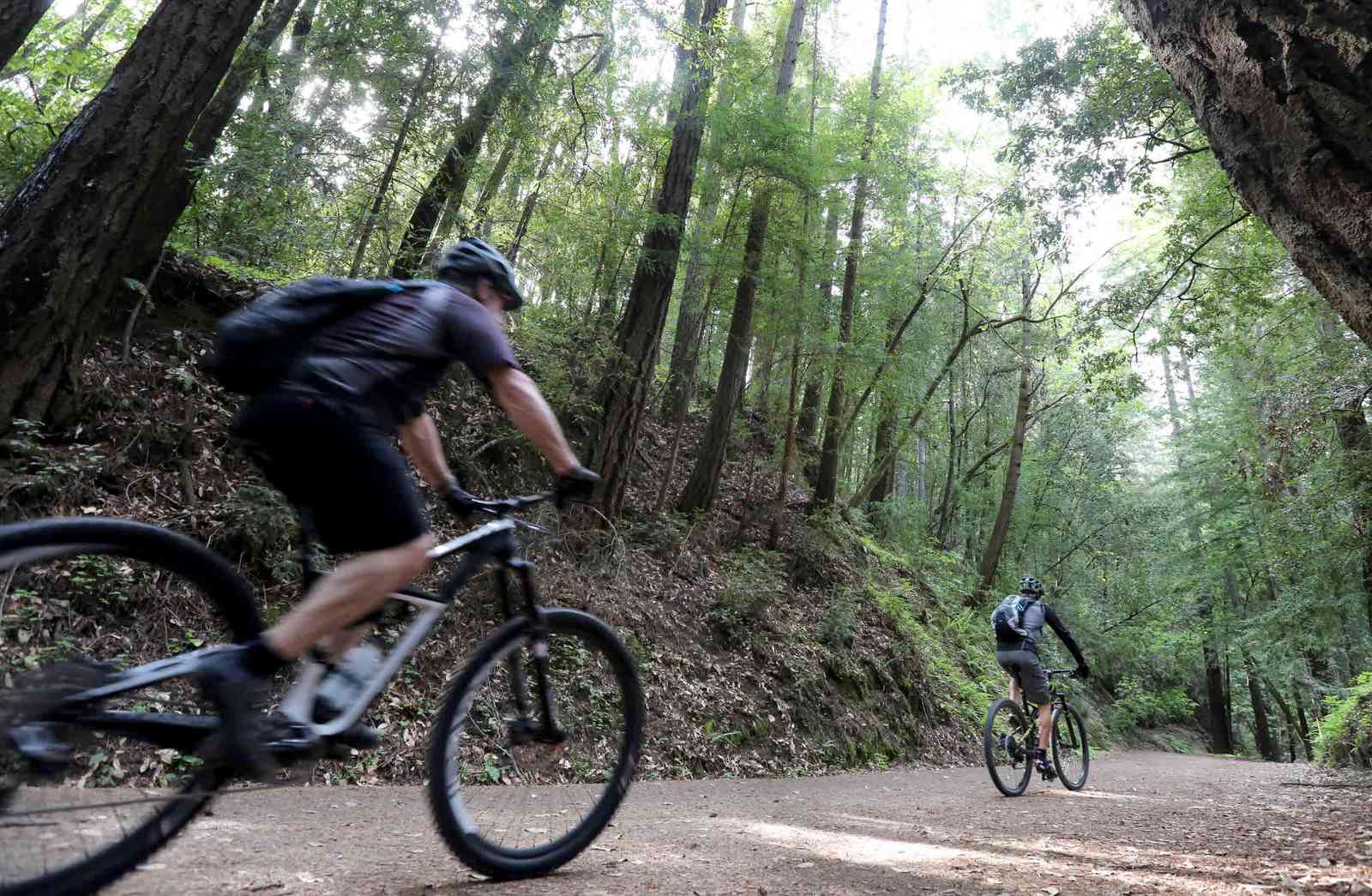 I’ve been riding the Campus Trails above Santa Cruz in California, and they have to be up there as some of the best. I’ve been out there riding twice in the last year.

The trails around Santa Cruz are great fun. They have a similar feel to places like Whistler, but they get a lot less traffic. There are definitely no lifts here. It’s a case of pedaling up. But above Santa Cruz, you’ve got redwood forests, which are really cool to be riding in. You’ve got wider, fairly well-built trails, but they’ve still got that loamy feel, rather than being dusty or rocky. It’s mostly been built by locals. The forests with the redwood trees are huge, and trails can be more than a foot wide. They are just magic terrain for riding bikes.

You can spot wildlife. You get mountain lions and other kinds of wild beasts in the woods.

It’s just an hour and a half north of there. Compared to southern California, where I’ve also been riding a lot, I like it because it’s not as arid. It’s much more lush and green, and they do get rain, so it keeps the trails a nice consistency, so you’re not just riding around in a dust bowl. You remember the film Bigfoot and the Hendersons? Once you’re in the woods you feel like you’re in that kind of terrain. You can imagine Bigfoot rooting around among these trees. 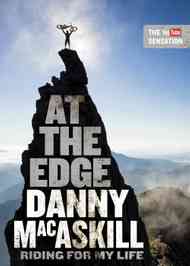 At The Edge: Riding For My Life by Danny MacAskill is out now, published by Viking (Hardback and eBook, £14.99). See www.dannymacaskill.co.uk for more details.