Bring a taste of Central Asia into your home with these 4 traditional rice recipes.

Plov, a steaming pilaf that is cooked in layers, is served almost everywhere in Central Asia. Today, there are literally thousands of variations throughout Central Asia and the Caucasus.

At its most basic, plov is rice, onions and carrots with either lamb or beef, but in reality it is much more than that. Early travellers to Central Asia often returned home with lively tales of epic plov feasts. Explorer and professor of oriental languages Arminius Vambery, wrote in his book Travels in Central Asia in 1864: 'My only wonder is that they could support the heavy plov.'

Chefs use a lot of intuition to tell when the plov is ready. They can smell the aromatic meat and feel the heat coming off the rice. During the Soviet era, women took over most of the cooking, but master plov chefs, known as oshpaz, are often male. At weddings, birthday parties and during holidays the most skilled oshpaz can serve hundreds of people from a single kazan. An oshpaz is recognised not only for his skills but also his wealth, for the grandest kazan can cost several month's wages.

In Samarkand – a city sometimes scented by plov – the dish is decorated with quail's eggs and is traditionally eaten on Tuesdays and Sundays. The lagan is placed in the middle of the table and the plov served in layers – first rice, then vegetables and finally, the meat. Cooked correctly, it is beautifully aromatic and melts in the mouth.


Buttered rice under a Shah's crown 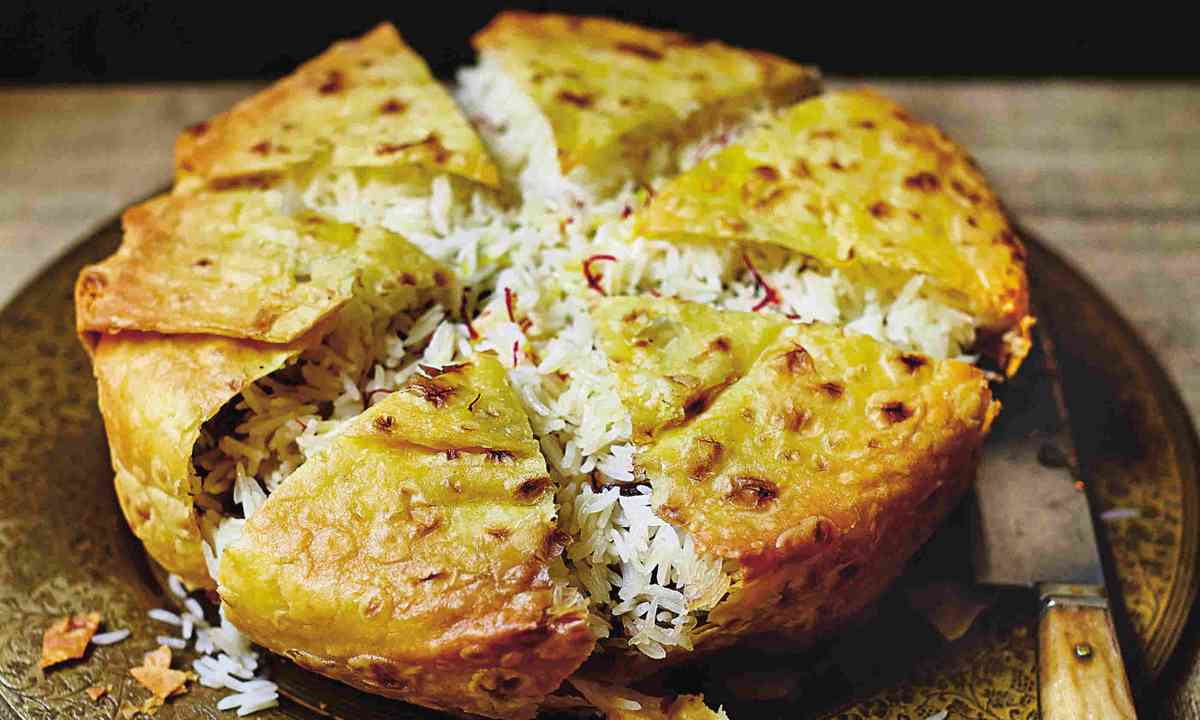 Method
1. Parboil the rice for eight minutes. Drain and spread out on a baking sheet to cool. Melt the butter, setting aside a small amount to grease the pan and lavash. To the rest, add saffron and a pinch of salt. Set aside.
2. To assemble the plov, use a cast-iron pan of 20cm in diameter. Grease the pan with butter and lay in the lavash, lining the bottom and sides, leaving some to hang over the edge. Fill any gaps with pieces of lavash and brush with butter.
3. Spoon a third of the rice into the lined pan and crumble over the chestnuts. Add another third of rice, then a layer of raisins and apricots. Top with the remaining rice. Make holes using the handle of a spoon and pour the saffron butter over it. Cover the rice with a final layer of lavash, then fold to cover the top. Brush with butter and cover the pan with a lid or foil.
4. Preheat the oven to 180ºC. Cook, covered, for one hour until golden. Leave to rest for ten minutes, then invert onto a serving dish. Crack a hole in the middle and cut the crust into six. The shards separate, giving the look of the crown.

This pumpkin is roasted with a filling of Persianstyle rice, studded with jewel-like colours from the fruit and nuts.
Bring the whole pumpkin to the table to serve and cut into wedges for each diner. 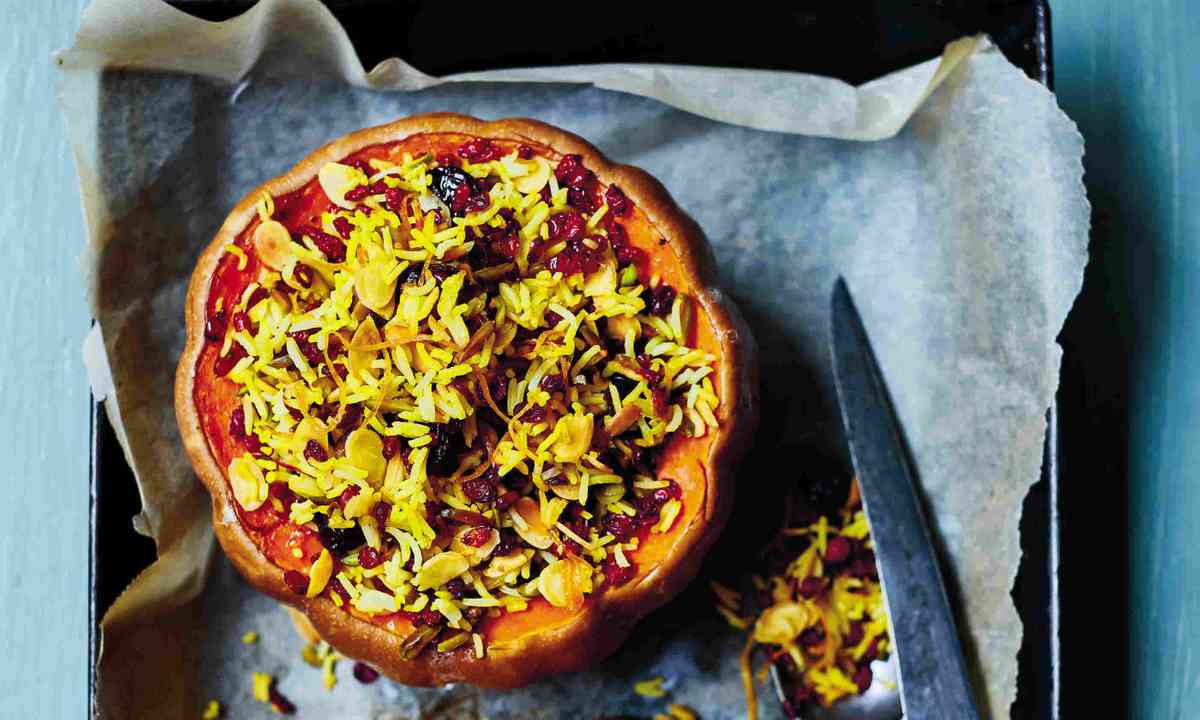 Method
1. Preheat the oven to 220°C/gas mark 7. Cut a lid off the pumpkin and reserve it. Scrape out the seeds and straggly strands and discard. Continue scooping out more of the flesh, leaving the shell 2–3cm thick (save the flesh for soup). Rub the inside of the pumpkin with a little olive oil and the cinnamon, cardamom and dried chilli. Season with salt and pepper. Roast for 30 minutes.
2. Meanwhile, put the barberries into a bowl of water and leave to soak for about 15 minutes, then drain. Put the orange blossom water into a small bowl and crumble in the saffron. Set aside. Toast the almonds and pistachios in a dry pan. Set aside.
3. Use a peeler to remove half the orange zest in strips. Slice these crossways into thin slivers. Bring a small pan of water to the boil, drop in the orange zest, boil for 1 minute then drain and refresh under cold water (this removes the bitterness). Return the pan to the heat and add the sugar and a generous splash of water. Heat to dissolve the sugar, then add the orange zest and cook the liquid down to a syrup. Remove from the heat and stir in the toasted nuts, barberries and sour cherries. Set aside.
4. Partially cook the rice in fast-boiling water for 6 minutes. Drain. Stir the fruity nut mixture through the rice, then drizzle over the orange blossom water. Season well. Spoon the jewelled rice into the pumpkin, top with the butter and place the lid back on top.
5. Tear off a piece of foil large enough to double wrap the pumpkin and lay out on a baking tray. Sit the pumpkin on top, rub the skin with a little olive oil and wrap the foil around it. Roast for a further 30 minutes to 1 hour, until the flesh is tender and a knife goes in easily (allow more roasting time if there is resistance to the knife). Sit for 10 minutes before serving.

The quintessential dish of Uzbekistan, with as many variants as there are people who cook it. This Samarkand version is a little lighter than most traditional Uzbek plovs,
where pools of lamb tail fat provide the dominant flavour. It can be made with lamb or beef and is distinctive for being cooked and served in layers.

Plov should be eaten from one large dish placed on the table to share, each diner digging in their fork. It is said people form mutual love from a communal
plate and the joy of eating plov. 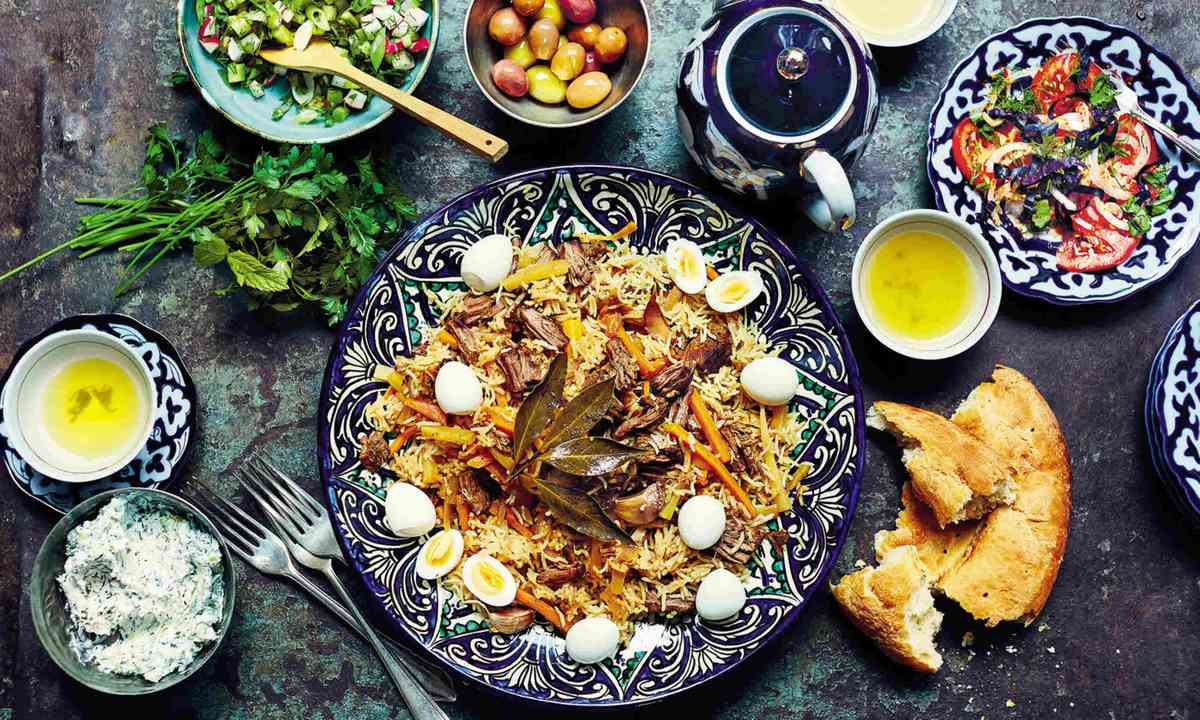 Method
1. You’ll need a good, heavy-bottomed pan with a close-fitting lid to make plov. In Uzbekistan, a cast-iron kazan is used; a large cast-iron casserole makes the perfect substitute.
2. Put the rinsed rice into a large bowl of cold water to soak while you start the recipe. Season the beef with salt and pepper.
3. Heat the clarified butter in the pan until hot and foaming. Brown the beef over a medium-high heat, in batches if necessary, then remove from the pan with a slotted spoon leaving the butter behind. Lower the heat to medium and add the onions. Cook, stirring occasionally, until softened and golden. Return the beef to the pan with any collected juices, the bay leaves and a small cupful of water. Bring to the boil, then turn the heat down very low, cover the pan and gently simmer for 1 hour until the meat is tender.
4. Spread over the carrot matchsticks, but don’t stir as you want to keep the layers separate. Scatter over the spices, and cover and cook for a further 10 minutes.
5. Drain the rice and layer it on top of the carrots. Poke the whole garlic cloves into the rice and flatten the top with the back of a spoon. Season very generously with salt and slowly pour over enough boiling water to just cover the top of the rice. Increase the heat and leave the pan uncovered so that the water starts to boil away.
6. When the liquid has cooked off, make six holes in the rice using the handle of a wooden spoon to help the steam escape. Cover the pan and cook at a low simmer for 5 minutes. Turn off the heat without removing the lid and leave the dish to steam undisturbed for a further 10 minutes. If the rice isn’t cooked, add a splash more boiling water and cover again.
7. Serve the layers in reverse, first spooning the rice onto the platter, then the carrots and finally the tender chunks of meat on the top. Circle the hard-boiled quail’s eggs around the edge. A juicy tomato salad is the perfect accompaniment.

Peculiar to Western Turkmenistan is a pilaf made with fish rather than the meat ubiquitous throughout Central Asia. Sturgeon from the  Caspian Sea is the usual choice, but another firm white fish such as monkfish or halibut makes a good substitute. 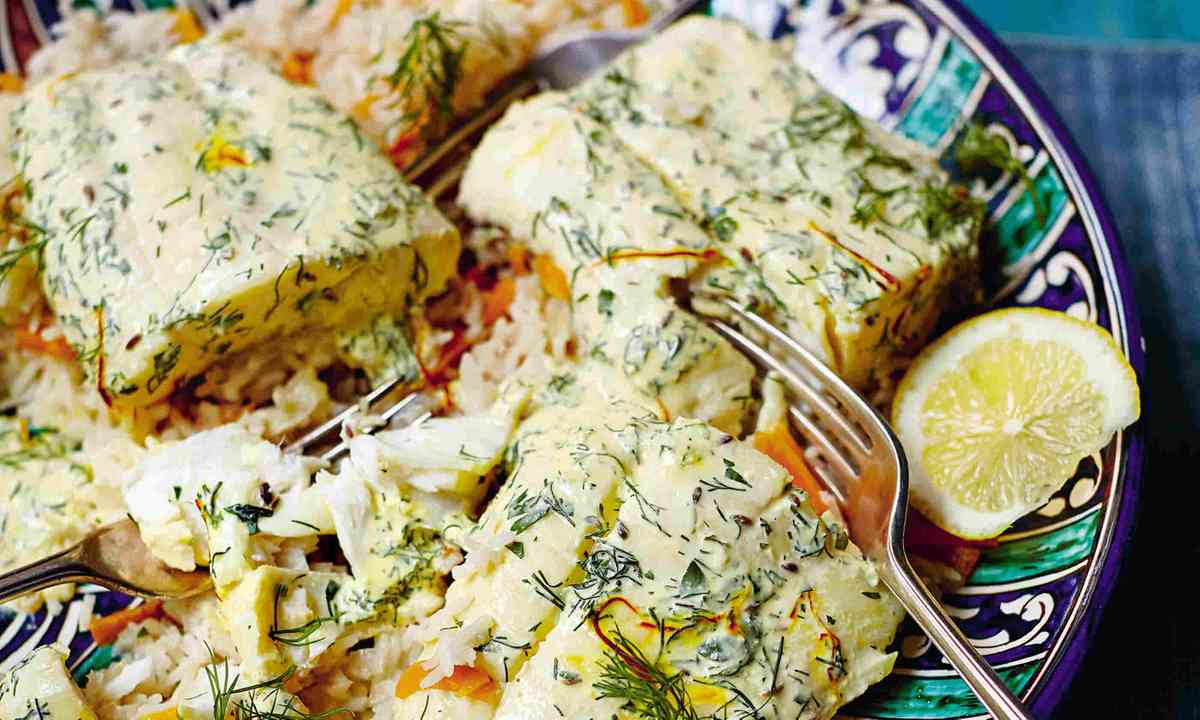 Method
1. Put the rice in a large bowl to soak while you poach the fish.
2. Bring 1 litre of water to the boil in a large pan and add the halved onion, along with the peppercorns, bay leaf and the stems from the parsley. Season well with salt and lower in the fish fillets. Cook at a very gentle simmer until just opaque through to the middle, up to 10 minutes depending on the thickness. Remove the fish with a slotted spoon and set aside. Strain and reserve the broth. You’ll use the pan again later.
3. You need a second large cooking pot in which to cook the rice. Heat the sesame oil until almost smoking, then add the onions and the carrots. Stir-fry until the vegetables start to soften. Tip in the drained rice and smooth down with the back of a spoon. Pour over enough of the fish broth to cover the top of the rice by about 1cm and salt generously. Bring to the boil and cook over a high heat until the broth has boiled off. Use the spoon handle to poke a few holes in the rice to help release the steam. Cover with a lid or tight-fitting layer of foil and remove from the heat. Leave to steam for 20 minutes for the rice to cook through.
4. Chop the parsley leaves and dill fronds and add to the empty fish pan. Add the dill seeds, black pepper, the saffron and its soaking liquid and season with salt. Stir in the soured cream and set over a low heat to warm through. Carefully add the fish fillets to warm through in the saffron cream before serving.
5. Turn the rice onto a large platter and squeeze over the lemon. Spoon the fish and its creamy sauce on top.

Excerpted from Samarkand: Recipes & Stories from Central Asia & the Caucasus (Kyle Books) by Caroline Eden and Eleanor Ford; out now.

You can win a copy of 'Samarkand: Recipes & Stories from Central Asia & the Caucasus' in this competition.