How to spend 24 hours in Samarkand, Uzbekistan

If you've only got one day to spend in this bejewelled city, fear not. You've just enough time to admire its medieval architecture, iconic blue mosaics and step back into its 2,750-year history...

What to know before you arrive in Samarkand 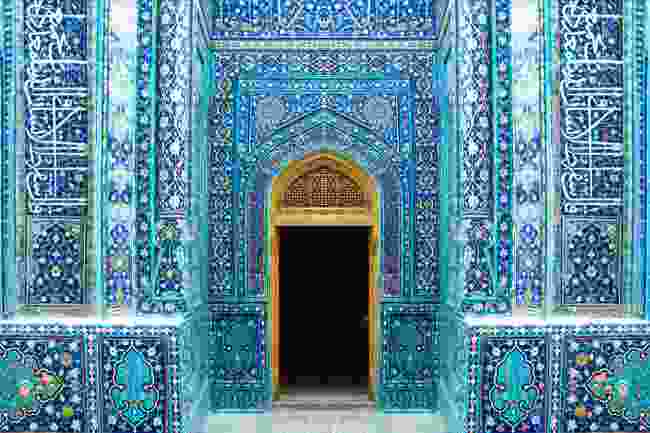 Samarkand is the very heart of the Silk Road, a glittering spectacle of tiled mosques, madrassas and mausoleums. It’s easily Uzbekistan’s most recognisable cultural destination, and its bejewelled Timurid-era monuments are a UNESCO World Heritage Site.

Standing in front of the Registan or walking through the Shah-i Zinda, you’ll be transported back in time to a period when Samarkand was the capital of an empire stretching from Turkey to India.

While the medieval architecture of Samarkand is its biggest draw, the city in fact has more than 2,750 years of history to explore. Alexander the Great came here, and so did Genghis Khan. Both of these warrior kings shaped the city, although it was Amir Timur who’d have the greatest impact. He was a patron of architecture and the arts as much as he was a fearsome warrior.

Contemporary life in Samarkand is equally vibrant, especially if you come during the Nowruz (Persian New Year) celebrations in late March. Not only will there be dancing in the streets and feasting, but also traditional kurash wrestling and kupkari matches – Uzbekistan’s answer to polo.

The people of Samarkand are also incredibly welcoming and may well invite you into their homes for tea and freshly baked bread. 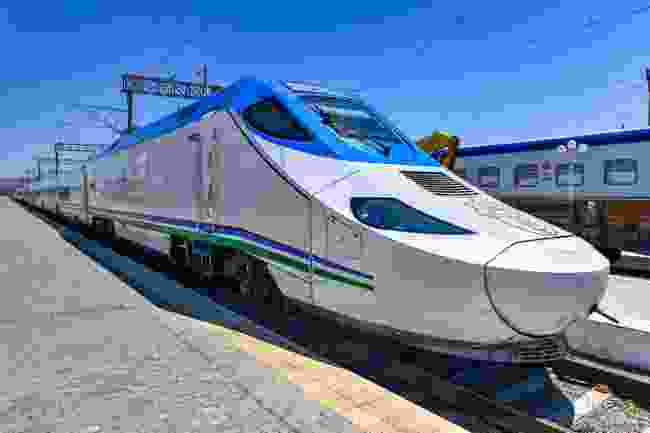 The Afrosiyob train travels from Tashkent to Bukhara and Samarkand (Shutterstock)

Although you can fly into Samarkand Airport, the best way to reach the city is by taking the superb high-speed Afrosiyob train from Tashkent.

Uzbekistan Airways flies twice weekly from London Heathrow (Tuesday and Friday), and if you pair a flight with the Afrosiyob train, it’s possible to visit Samarkand for a long weekend, especially now that UK passport citizens can stay for 30 days without a visa. Built by the Spanish company Talgo, the trains are immaculately clean, affordable and run to time.

Arriving at the station, taxis wait by the exit to transport you into the centre of town for around US$5 (£3.81). Agree the price before you get in, or ask your hotel to send a car. The drive should take 15-20 minutes depending on the time of day.

How to spend the day in Samarkand 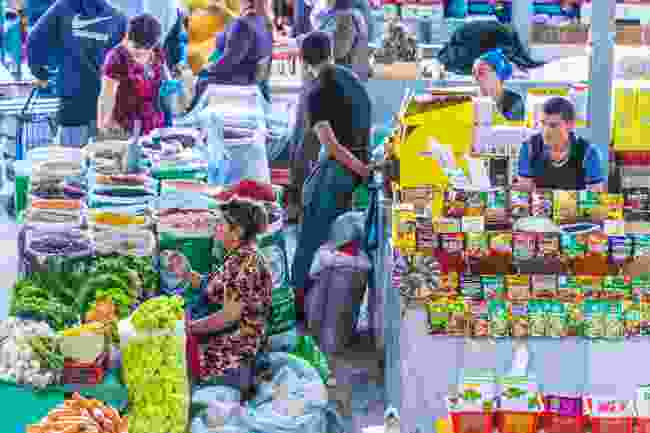 Rise early to see the Shah-i Zinda in the morning light before the tour groups arrive. This was the royal necropolis of the Timurid dynasty (minus Timur himself), and is also thought to be the burial place of Kusam ibn Abbas, a cousin of the prophet Muhammad. The majolica tilework on the tombs is among the finest in Uzbekistan.

Cross the road to the BibiKhanym Mosque with its giant portal and turquoise dome. The mosque was built by Amir Timur and is named in honour of his wife. Locals believe that if a woman crawls beneath the marble Quran stand in the central courtyard she will soon conceive a child.

Haggle for dried fruits and nuts in Samarkand's Siyob Bazaar, then wander along Tashkent Street, which is lined with handicraft shops and designer boutiques. Samarkand is famed for its painted ceramics and embroidered textiles, so it’s the perfect place to pick up souvenirs. 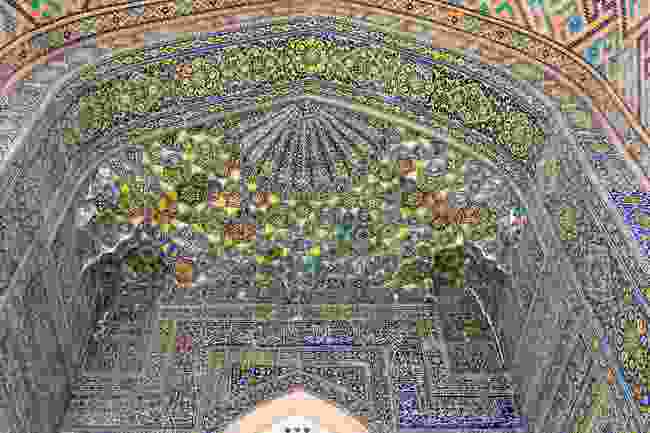 The interior of the stunning Sher Dor Medressa, Samarkand (Shutterstock)

At the end of Tashkent Street is the Registan, the most impressive site on the entire Silk Road. Three jewel-like madrassas (universities) flank the square.

Be sure to go inside the Tilla-Kari Mosque, the interior of which is decorated with gold leaf; and to look up at the curious, tiger-like creatures depicted in the tiles on the front of the Sher Dor Medressa. Musician Babur also has his workshop within the madrassa; pop in for an impromptu performance.

The final stop on your day’s tour should be Gur-e-Amir, the mausoleum of Amir Timur. Timur wanted to be buried in Shakhrisabz but when he died on campaign in China, it was decided to inter him here instead, in the mausoleum he had built for his favourite grandson.

What do Samarkand locals recommend? 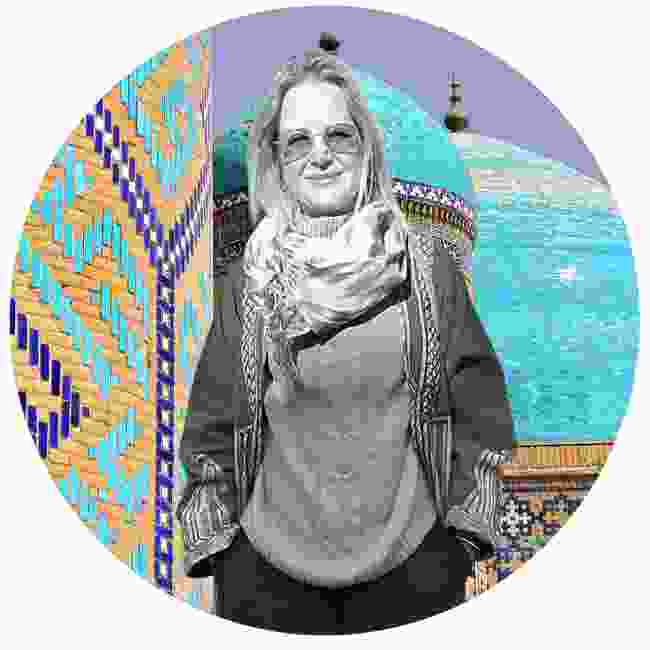 “The most authentic place to try plov (Uzbekistan’s national dish) is at the plov centre near the Ulugh Beg Observatory.

It’s a little out of the way, but this is where local people go. Plov is made with hard-boiled quail eggs, chickpeas and chillies.”

Where should you stay in Samarkand? 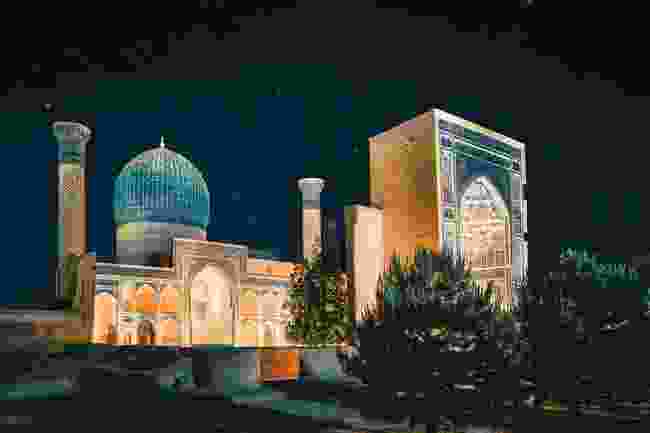 Stay near the spectacular Gur-e-Amir mausolem, which glitters at night (Shutterstock)

Top end: Four star Registan Plaza is located close to the Registan and the Gur-e-Amir and is a popular choice for business travellers as well as tourists. The rooms are built around a huge central atrium. The hotel has air-con (important in the hot summer months) and there’s also an indoor swimming pool. Doubles from £146.

Mid range: Malika Prime is part of a small Uzbek chain of boutique hotels. It’s a three-star property with an attractively tiled facade, and right in the centre of the city. Doubles from $80 (£62).

Budget: Antica B&B is a house with an idyllic garden, situated just moments away from the Gur-e-Amir. Its rooms are decorated with hand-embroidered textiles and the breakfast spread alone justifies the rate.

Should you stay in Samarkand, or keep going? 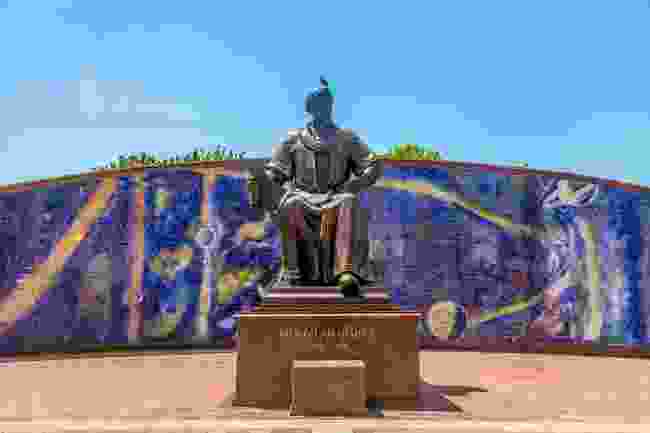 The statue outside of Ulugh Beg’s Observatory, Samarkand (Shutterstock)

Stay! In a day you can barely scratch the surface in Samarkand, so if you do have additional time, allow yourself another day to fully appreciate the city’s treasures. To learn about Samarkand’s ancient past, head to the Afrosiyob Museum, next to the archaeological site of the same name.

Afrosiyob was destroyed by Genghis Khan, but archaeologists have excavated some remarkable finds, including exquisite wall paintings showing scenes of Silk Road travellers. These are displayed alongside ossuaries and household goods.

Close to Afrosiyob is the Tomb of Daniel, the Old Testament prophet. This holy site is a place of pilgrimage for Christians, Jews and Muslims, and as devotees believe Daniel’s body is still growing, his coffin is absolutely huge!

Last but not least, visit Ulugh Beg’s Observatory. Ulugh Beg was Emperor Timur’s grandson and his passion was astronomy 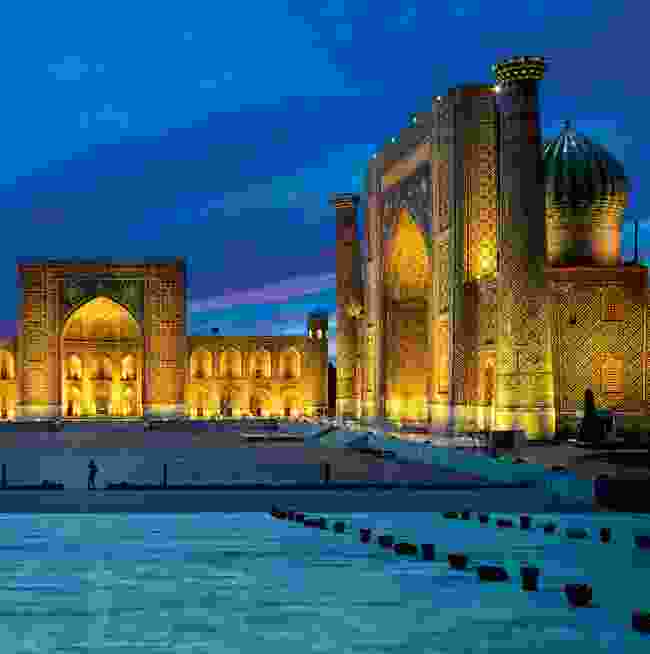 Languages: Russian, Tajik, Uzbek. Some English is spoken in hotels and restaurants.

Visa: Uzbekistan is visa free for British passport holders and other EU nationals for stays of up to 30 days.

ATMs: Although still not widely available in the city of Samarkand, there are ATMs at the airport and train station, on Tashkent Street and in larger hotels, as well as in some bank branches. ATMs usually accept Visa or MasterCard and dispense UZS notes.

Credit cards: Credit cards are only accepted in larger hotels and a small number of shops on Tashkent Street. It is generally recommended to carry cash, particularly for restaurants and smaller purchases.

Recommended guidebook: The new and fully updated edition of Bradt Travel Guides’ Uzbekistan, by the author of this article, was published in December 2019.

Useful website: Uzbekistan Travel provides inspiration and travel tips to help you plan your visit to Samarkand and beyond.

How to spend a day in Tashkent

Why you must visit Bukhara (beyond the obvious)

Enjoy a cookery experience in Khiva