New direct flights from London have brought Fez’s medinas and mosques even closer, but the city offers more than just glimpses of its past, says Sarah Gilbert

Fez may lag behind Marrakech when it comes to hip riads and sophisticated restaurants, but there's a transformation underway. Ancient palaces are being reinvented as boutique hotels and homegrown and expat chefs are turning market produce into gourmet fare. Still, in Morocco's oldest and, arguably, most fascinating imperial city, some things will never change.

Time appears to have ground to a halt in the 8th-century Fez el Bali, the world's largest living medieval medina. Inside lies a jumble of souks, workshops and mosques; a sensory overload of sights and smells all competing against the sound of the muezzin (men issuing the call to prayer). Wandering its tangle of more than 9,000 narrow alleyways is like stepping into the past.

Nearby, outside the Bab Boujeloud (Blue Gate), the 'new city' of El Jdid was built in the 14th century by the Merenid dynasty as the seat of government, and it remained the administrative centre of Morocco until 1912. To its south, the Ville Nouvelle neighbourhood was built by the French in the 1920s, complete with palm-shaded boulevards and art deco buildings. Exploring all three is like hitting history's fast-forward button, even if the only way to get around the medina is slowly on foot (bring comfortable footwear). But it's worth the effort.

Fes-Saiss Airport lies 13km south of the city centre. It is served by new direct flights with Air Arabia (airarabia.com/en), which fly from London Gatwick once a week, as well as twice-weekly Ryanair (ryanair.com) flights from Stansted. Flight time is 3.5 hours and returns cost from about £60.

Visas are not required by UK nationals but be sure to get a passport stamp - some visitors have experienced difficulty leaving without one. In Arrivals, you'll find currency exchanges and ATMs.

The fixed price for a taxi from the airport to the Fez el Bali medina is MAD150 (£12), or book a private transfer with an English-speaking guide through your hotel for around MAD200 (£16).

The No.16 bus runs from the airport roughly every hour until the evening; a single ticket costs from around MAD4 (30p).

Air Arabia has launched direct flights between Fez and Marrakech, taking just one hour (as opposed to seven hours or more by bus or train) with prices from around £20 one-way.

Bus is the most common form of transport in Morocco. National bus company CTM (ctm.ma) is the fastest and most reliable option; tickets can be booked online in advance. Fez's train station is in the Ville Nouvelle area, but there is a limited rail network here and trains can often be delayed. 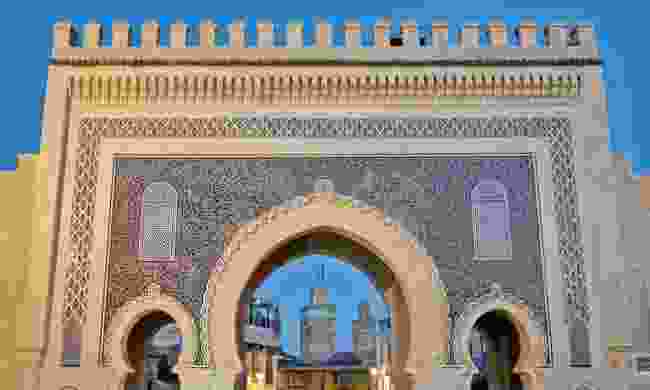 Visas: Not required by UK nationals for a period of up to three months.

Currency: Moroccan Dirham (MAD), currently around MAD12.52 to the UK£.

Highest viewpoint: Head up to the Borj Nord (now the national armoury museum) for stunning views over the medina.

Web resources: The official website for Morocco Tourism (muchmorocco.com) is a good resource for travellers.

Climate: The best time to visit is between April and June or September and October, when it's cooler. July and August can get very hot (up to 40°C), and while December is the coolest month on average, it can get chilly, especially if trekking, so dress accordingly.

Top-end: The owners of Karawan Riad (karawanriad.com) spent ten years turning this palatial 17th-century riad into a serene boutique hotel. Its courtyard is filled with soaring columns, there is a rooftop bar, and its seven sumptuous suites are packed with one-of-a-kind global finds, antique fabrics and original art. Doubles from 90 euros (£80).

Mid-range: The courtyard and five rooms of delightful Riad Idrissy are filled with dazzling zellij tiles and stucco work, and furnished with antiques from all over the country. Enjoy a breakfast feast in the adjoining Ruined Garden restaurant, or in the library in cooler months. Doubles from 80 euros (£70).

Budget: The tranquil and intimate Dar Arsama (dar-arsama.com) has been sensitively renovated over the last three years in a blend of traditional and modern decor, with original art scattered around the house and a lovely private terrace. Doubles from 50 euros (£44). 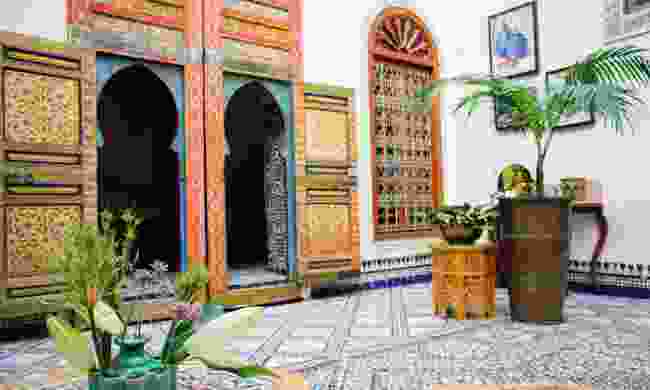 Enter Fez el Bali at the Bab Boujeloud (Blue Gate) and dip down the Talaa Kebira – one of the medina's two main arteries – in search of the Medersa Bou Inania, replete with its magnificent zellij tiles, ornate stucco and carved cedar wood.

Continue along the Talaa Kebira, past shops and ancient fondouks (inns), to the spice-scented Souk el Attarine and the picturesque Place an Nejjarine. Stop to look at the Kairaouine Mosque (closed to non-Muslims) and the world's oldest library, which has just been renovated.

Head to the iconic Chaouwara Tanneries – you'll smell them before you see them – to witness this age-old process, then rest up at Cafe Clock - good for a mint tea and a camel burger.

Spend the afternoon souk shopping for leather coats, bags, beaten copper, aromatic spices and more. Remember to bargain hard - it's expected. But only start haggling if you're serious about buying.

For a contemporary take on traditional crafts – and fixed prices – head to Medin' Art on Talaa Seghira, a gallery and concept store. Finish with gourmet street food at The Ruined Garden (ruinedgarden.com) or splurge at NUR, where the chef can cook up a six-to ten-course (depending on the day) tasting menu of Moroccan fare. 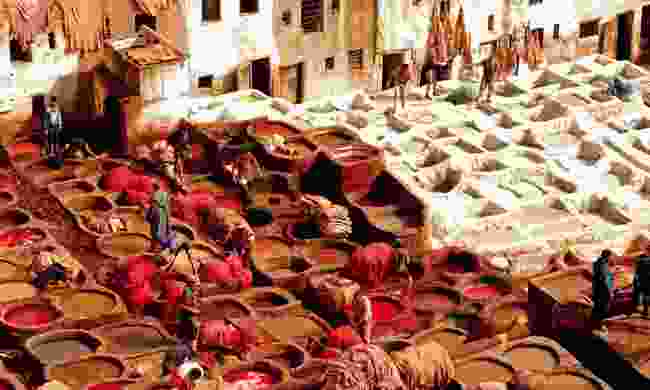 Stay. You could easily spend a week exploring all that Fez and the Middle Atlas has to offer. Get to grips with Fassi cuisine on a street food tour with Plan-it Morocco (plan-it-morocco.com), take a cookery class at Cafe Clock, or try Moroccan bread-making at The Ruined Garden.

Afterwards, unwind at Riad Laaroussa (riad-laaroussa.com), an elegantly restored 17th-century bathhouse, and be steamed, soaped, scrubbed and massaged into a state of utter relaxation.

Fez makes the perfect base to visit the more manageable imperial city of Meknes, the Holy City of Moulay Idriss, the Roman ruins of Volubilis and the Berber villages of Azrou and Sefrou - all less than two hours' drive away.

If you time your visit to coincide with Fez's annual Festival of World Sacred Music (fesfestival.com/2017), you'll also hear everything from Sufi chanting to African jazz ringing out across its ancient squares and Andalusian gardens.