Cherry-pick from these top 11 viewing spots, combining blossom-worship with a dose of history, hiking, partying or shopping Why: The setting of one of Japan’s first cherry blossom festival of the year, normally late January to early February

With more than 7,000 cherry blossom trees covering 453m-high Mount Yaedake, the setting is as picturesque as the blooms are, well, pink. In between the crowning of the annual Miss Sakura, the taiko drumming sessions, the street dancing, the karaoke and the tug of war competition, don’t forget to wander up the mountain with a picnic and admire the views.

While you’re there: Visit the pretty castle ruins in Nago City, also the setting for another 20,000 cherry trees. 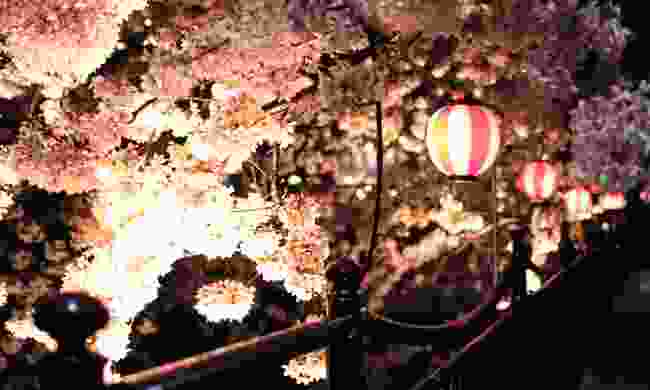 Why: A hidden botanical delight in the heart of the atmospheric city of Kurayoshi

Set at the base of Mount Utsubuki, the park contains 4,000 trees, which burst into bloom around April. Lanterns are hung and picnickers gather en masse.

While you’re there: Pop into the local soy sauce and sake brewery firms that still operate in the merchant houses that line the pint-sized city before hopping on a bus to soak for a few hours in the natural volcanic hot springs at Sekigane-onsen. Why: Japan’s fourth-largest city, on the Pacific coast, is not only famous for its distinct cuisine and port, it’s also cherry tree heaven and home to several unusual varieties

The central springtime focus of the city is Nagoya Castle; its tiered tiled walls, traditional architecture and two golden rooftop orcas compete for attention every year with the blooming trees. While the castle was widely damaged during the Second World War, it was given a modern restoration in 1959 (complete with elevators). 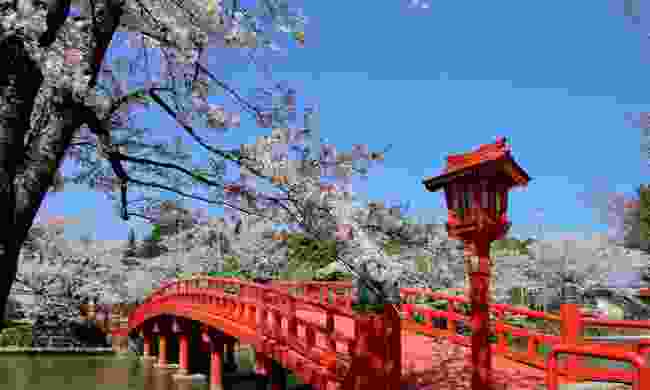 Why: Picturesque walkway entirely enclosed by cherry blossom trees leading to a shrine

Only an hour by train from Tokyo, Kamakura is an atmospheric seaside region a million miles from the urban atmosphere of the capital: wander along the Dankazura, a raised pedestrian path lined with white-petalled cherry trees and lanterns, before arriving in the peaceful 11th-century confines of Tsurugaoka Hachiman-gu shrine.

While you’re there: Hire a bicycle at Kamakura station and cycle along the seafront, visit the green bamboo forest at Hokoku-ji temple and pay a visit to the famous giant bronze Buddha statue at nearby Kotokuin. 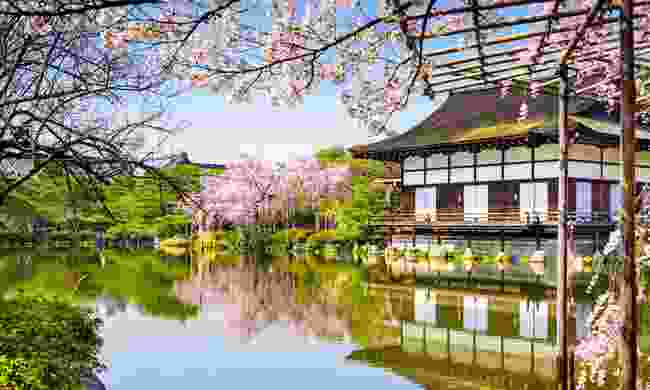 The garden of Heian-jingu shrine (Shutterstock)

Why: Join a cherry blossom tea ceremony in the gardens

For a more Zen version of blossom appreciation than that endorsed by sake-sodden salarymen, stop by at the Heian-jingu Shinto shrine and make a beeline past ponds and bridges for the teahouse in the Japanese-style gardens. Meditate on the calming ritual surrounding the creation of the perfect cup of green tea surrounded by weeping cherry trees.

While you’re there: Don’t miss the giant red gates at the entrance – the largest Torii (shrine gate) in Japan at more than 24m high. To avoid the crowds, head for Tofuku-ji temple. Home to a solitary (but beautiful) cherry tree, it offers a peaceful and quiet retreat during the crowded sakura season. 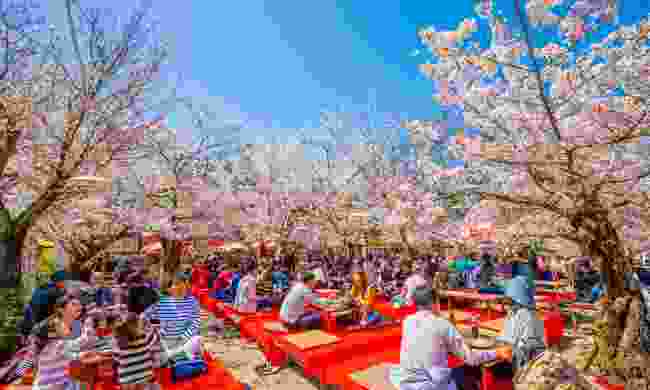 There are few better places to practise the art of hanami picnics than Maruyama-koen – just make sure to get there early. The atmosphere beneath the canopy of blossoms is one of sake-fuelled revelry that lasts until after the sun sets and lanterns light up the flowers.

While you’re there: Visit the park’s VIP attraction – one of the country’s most famous weeping cherry tree. 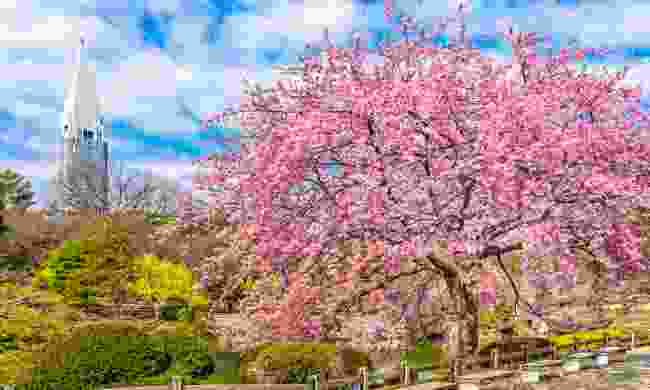 Why: One of the (fractionally) calmer places to appreciate blooms

The heart of the capital Shinjuku may be synonymous with neon-lit towers, techno gadgets and crowded crossings, but the former Imperial family garden Shinjuku-gyoen shows another side of the capital: quiet gardens spanning 58 hectares are dotted with more than 1,500 cherry blossoms. Late visitors can also catch the yaezakura (trees with blossoms of more than five petals), which come to bloom at a slightly later date.

While you’re there: After picnicking under the trees and exploring the Japanese, English and French-style gardens indulge in some retail therapy in stores around Shinjuku station. For other Tokyo cherry blossom hotspots, take a stroll along the lantern-lined Meguro River, have a picnic in lively Yoyogi Park or hire a rowing boat to paddle past blooms in Kitanomaru Park. 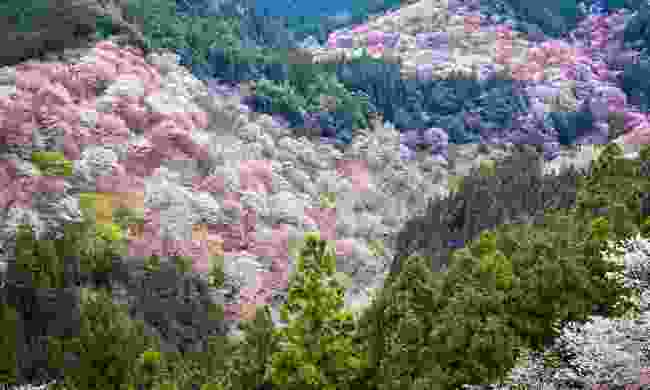 The view of Mount Yoshino in Spring (Shutterstock)

Why: For historic hillside blooms

Mount Yoshino is an ancient cherry blossom mecca – its Kinpusen-ji Zao-do Temple has been a site for the practice of mountain asceticism since the eighth century and many devotees have donated cherry trees. Today there are more than 30,000 trees scattered across these historic slopes. A popular destination year-round for hikers, it peaks in beauty during spring. Different types of cherry trees grow on four different levels of the mountain, extending the viewing season.

While you’re there: Nara, to the north of Yoshino, was the first capital of Japan. Explore Nara-koen, the park containing many of the city’s key historic sights, including the ancient pagodas of Kofuku-ji. 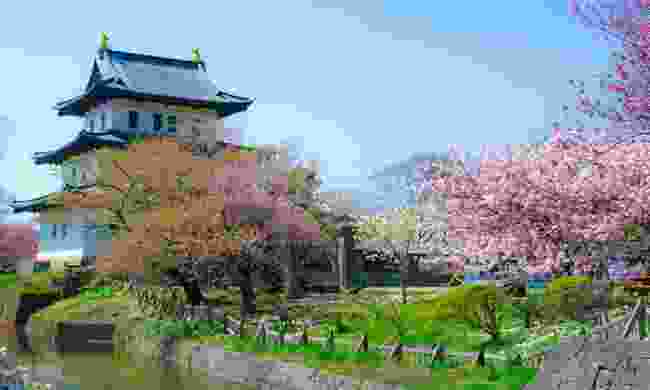 Why: Japan’s northernmost castle town, Matsumae is the perfect setting for latecomers to enjoy the final blooms of spring

Home to an epic 10,000 cherry trees – eclipsing even the latest population count of 9,568 residents – Matsumae is synonymous with the springtime blooms. Set around the ruins of Matsumae Castle is the park, home to more than 250 cherry tree species. As well as numerous picnicking pilgrims, the park has a reference library with blossom-related artworks on display.

While you’re there: Step back in time at Matsumae-han Yashiki, a replica of a 19th-century village. 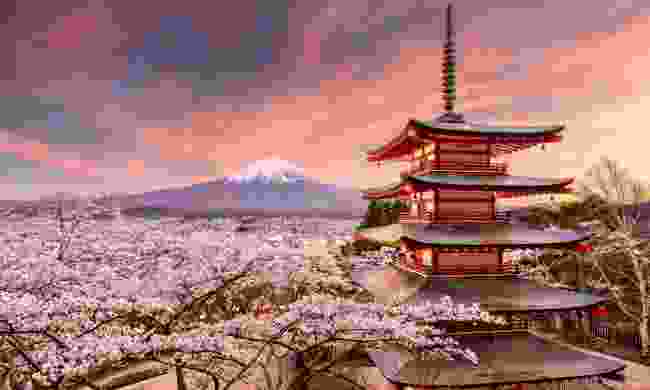 The rural, mountainous Hakone area – home to iconic views of Mount Fuji – is only 100km from Tokyo. Part of the Fuji-Hakone-Izu National Park, the region is scattered with pink trees: on its slopes, among its onsen (hot springs) and along the shores of scenic mirror-smooth Lake Ashi.

While you’re there: Stay in a traditional ryokan (inn) and indulge in a kaiseki (traditional banquet) – invariably sprinkled with cherry blossom petals – in the privacy of your tatami-mat guestroom. 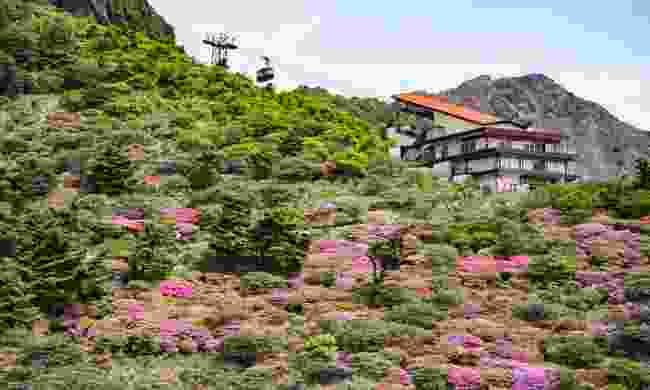 Why: For volcanic mountains, onsen, mirror-smooth lakes – and an abundance of wild cherry trees

Amid a group of active volcanoes in the country’s first designated national park, Unzen is hiking heaven. Wander past hot springs and dense woodland en route to Lake Suwa-ko, whose shores are lined with picturesque pink in spring.

While you’re there: Head to the Nita Pass to take in the smouldering mass of Japan’s newest mountain Heisei-Shinzan (formed after a 1990 eruption) before hiking to a shrine at the apex of 1,333m Mount Myoken.

A post-hiking soak is a must: almost all hotels in Unzen have their own hot spring baths.