From century-old eggs and maggot cheese to fermented shark, Adelina Storkaas gets her teeth stuck into 10 of the most bizarre national food dishes from around the world, guaranteed to linger on your tastebuds 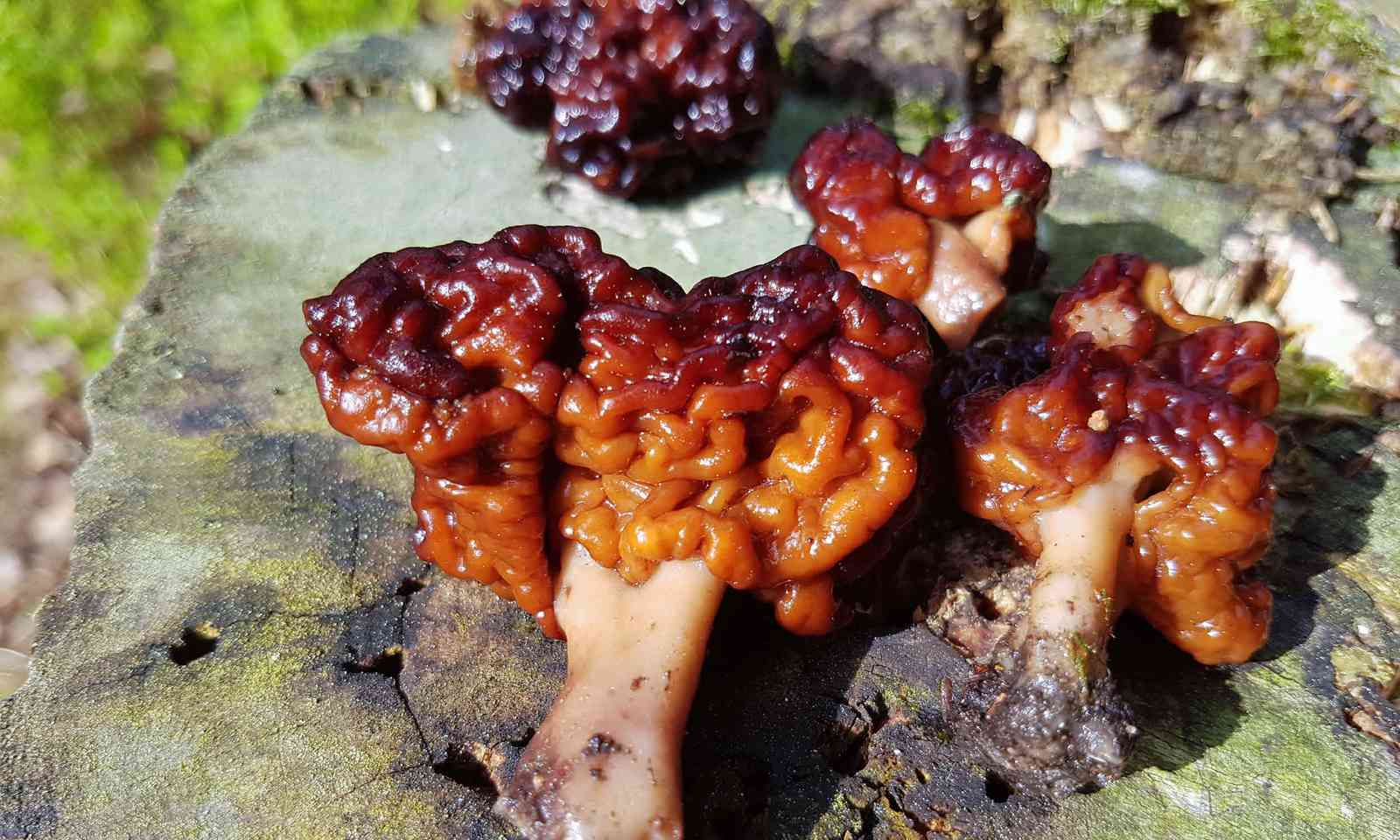 The false morel mushroom is a treat you could die for - literally. Inexperienced hands shouldn’t attempt cooking the highly toxic mushroom that some people, especially in Finland, consider to be the ultimate ingredient in risotto or pasta dishes. It contains gyromitrin, which affects the liver, central nervous system and sometimes the ability to get pregnant.

Most European countries have banned the mushroom, and in Finland they have special cooking classes to make sure people know how to prepare and handle the delicacy properly. To make sure diners won’t get poisoned or, in the worst case, die, the mushroom has to be parboiled several times to reduce the amount of toxins. It can’t be left to dry where people are around either, because of the high toxic levels that go into the air.

Finland isn’t the only Scandinavian country embracing the 'treat'. In Sweden, it has become a more frequently used ingredient at restaurants. The country’s National Food Agency, Livsmedelverket, even considers it a health and safety issue for chefs who prepare the toxic mushroom.

Eating the Sardinian cheese casu marzu (rotten cheese) is an opportunity to get closer to Italian wildlife. Fly larvae help the sheep milk cheese’s fermentation process, and, as some diners prefer to keep the insects in the cheese even after this stage, they can witness maggots jumping as they put the cheese in their mouth.

The EU has banned this sheep's milk cheese for Health and Safety reasons, and it can only be found in Sardinia. Nevertheless, on the large Italian island in the Mediterranean sea, they believe it is dangerous to eat their cheese if the maggots have died.

The strong ammonia flavour can also sting as you tuck into the maggot cheese and the aftertaste is said to linger for hours. The ‘world’s most dangerous cheese’ got its name for a reason, but on Sardinian weddings and celebrations it is still a delicacy. 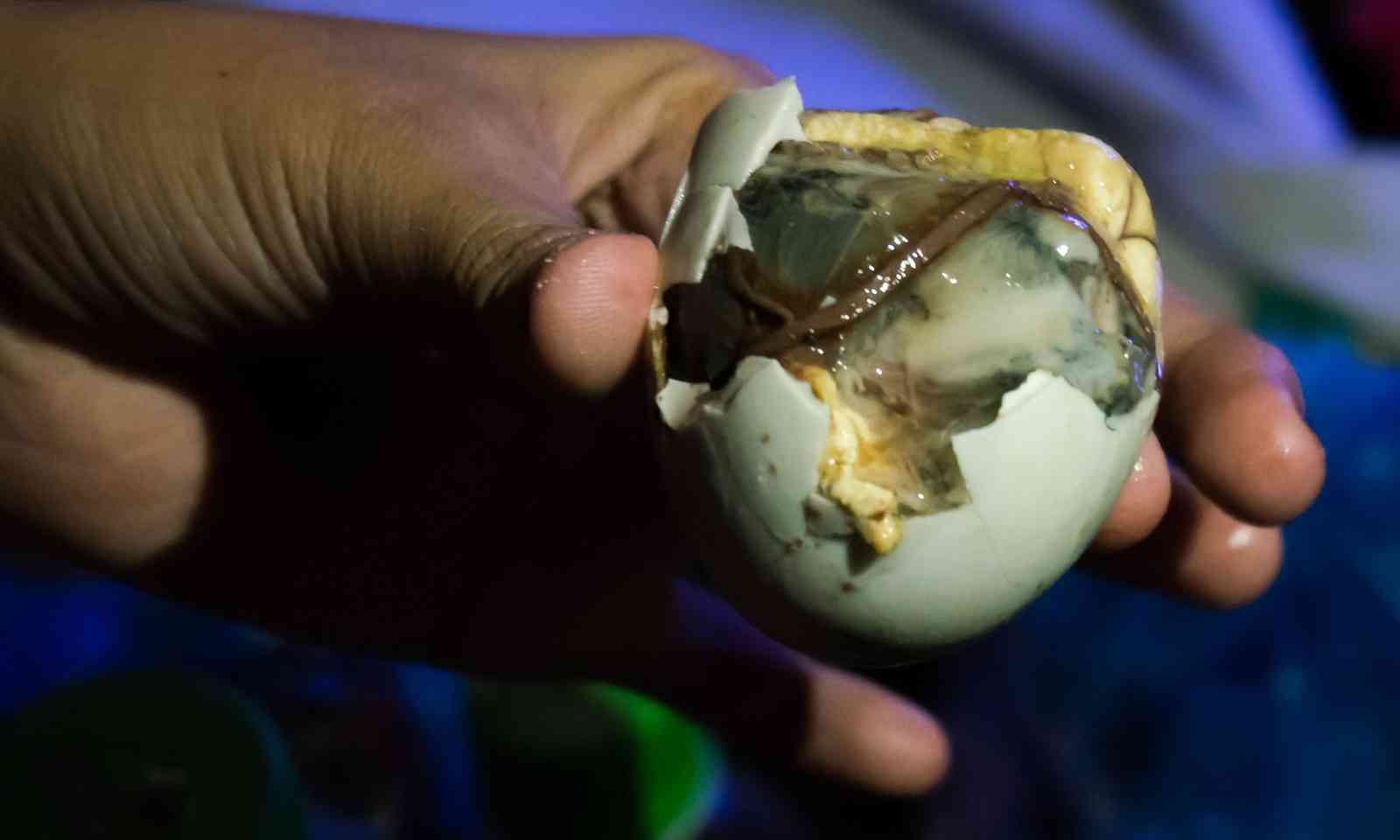 The Vietnamese and Philippine street food, balut, is a developing duck embryo that some people refer to as ’dog meat soup’. Just days before the egg hatches, when it is 14 to 21 days old, it is hard boiled and the foetus’s feet, beak and eyes are clearly visible. The foetus is boiled alive in its egg. Before foodies tuck in, they often add salt or chilli, vinegar and onion to the duck that's commonly eaten straight out of the cracked egg and 'enjoyed' with a beer.

Like many Chinese dishes, balut is claimed to have dubious health benefits, such as enhancing libido and fertility. Some Filipinos enjoy balut daily for breakfast, but others are not keen to eat the national delicacy. To introduce the dish to children, some schools even use the eggs at science classes. After the students have dissected the bird and studied it, they'r encouraged to eat it. 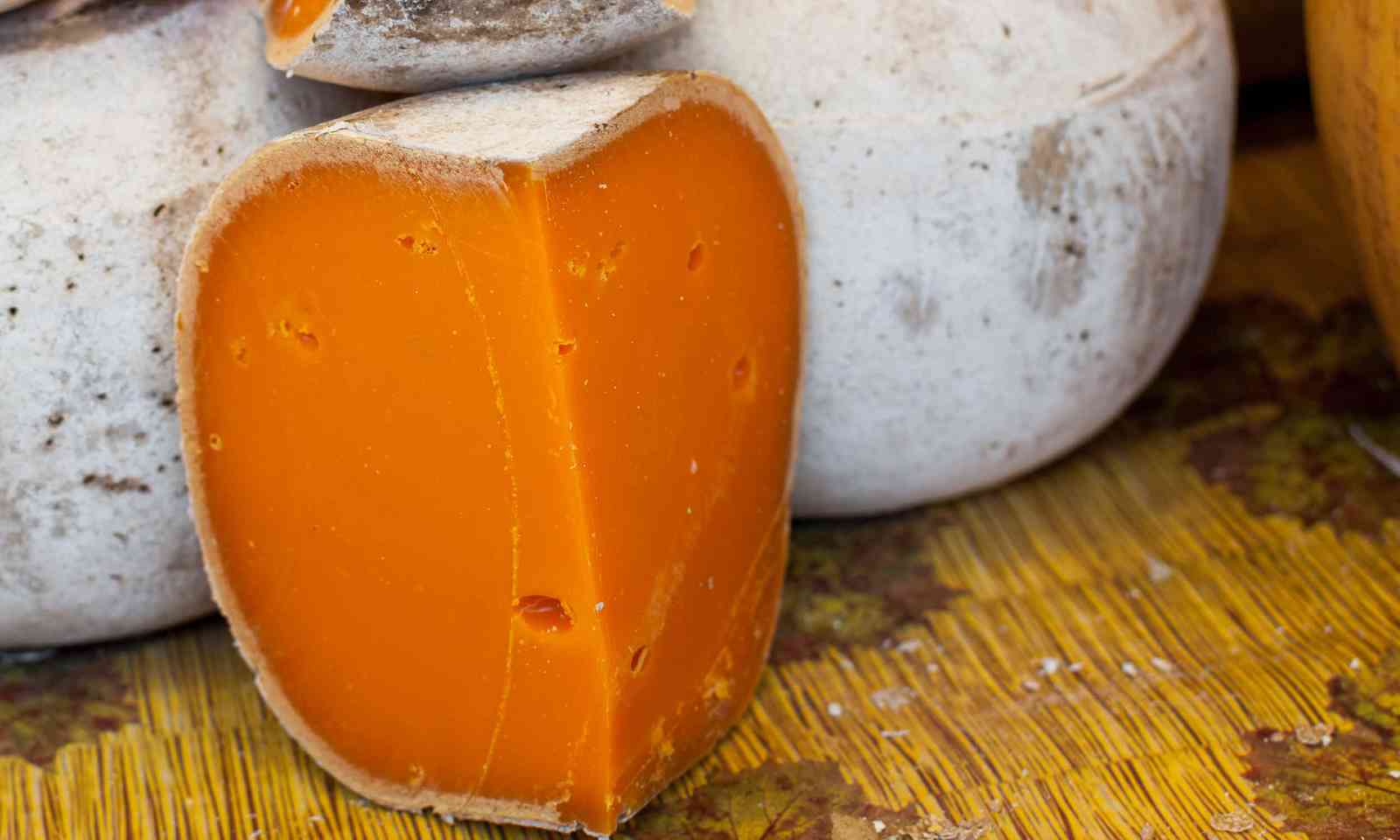 Despite some reports of allergic reactions and warnings from the Food and Drug Administration’s (FDA) recommendations in the US, some people still choose to consume large quantities of the French cheese Mimolette.

The cheese’s bright orange paste has a sweetness to it. It’s said to taste like bacon, butterscotch, toasted nuts and caramel, and goes well with red wine or dessert wine. It’s protected by a brown, unappetizing hard layer of dust that becomes more difficult to cut through as the cheese ages.

The cheese originates from Lille and was inspired by the Dutch’s Edam cheese, but a major difference that the French refers to as affineurs, (’refiners’) gave rise to FDA’s concern in 2013.

The French call mites refiners because of their essential role in the ageing process, which takes six weeks to two years. The FDA is not as impressed by the small insect, though, and the importing of the hardy cheese to America stopped a few years ago.

Surströmming (fermented herring) isn’t just hated or loved by those hardy people who dare to put it in the mouth. Anyone who is close enough to its strong aroma (worse than rotten eggs) has the right to an opinion. This Swedish tinned ’delight’ better not be consumed indoors.

Swedes in the 16th century invented a new way to prevent fish from rotting, using a lot of salt, and the farmers who lived by the northern part of the Baltic Sea, Bohnian Bay, often brought it with them on travels and hunts.

Even though Sweden is a prosperous country today, people in the north part of the country still eat the dish that was invented to get through tough economic times.

Many Swedes have never tried the national dish and the northern Swedes don’t enjoy it daily. In the colder part of the country, they take out the tinned fish and enjoy it with boiled potatoes, sour cream, chopped chives and crisp bread on special occasions. 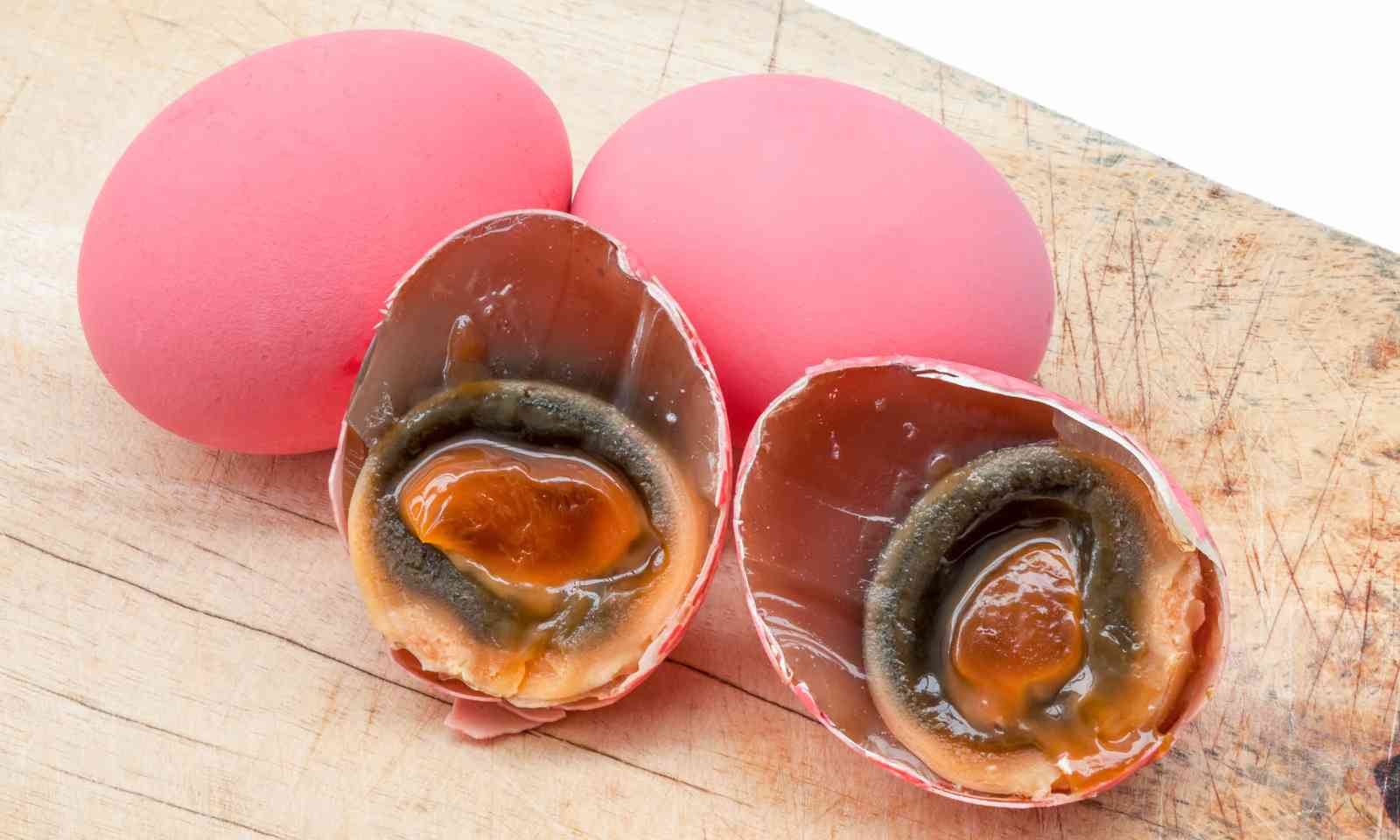 A grey or greenish yolk doesn’t necessarily mean that an egg has gone bad. At least, not if you're eating pidan in China, when the preserved duck, chicken or quail egg is served as a side dish or with rice. On top of the multicoloured yolk, it also offers a black and white egg white and smells like ammonia and sulphur. The unappetising smell has seen it granted the nickname ’horse urine egg.'

Nevertheless, pidan goes by many nicknames. It is often referred to as a century egg, 100-year-old egg,1,000-year-old egg or millennium egg. Despite the names’ implications, the egg is only preserved for several weeks or months. To prevent it from rotting, the Chinese preserve it in rice husks, or in clay, salt, ash and quicklime, which gives it its peculiar colours and jelly consistency.

The snack can be found on street food stalls or in supermarkets in China. Some people believe that a farmer came up with the preservation process after the discovery of a duck egg that had been naturally preserved in a water puddle. 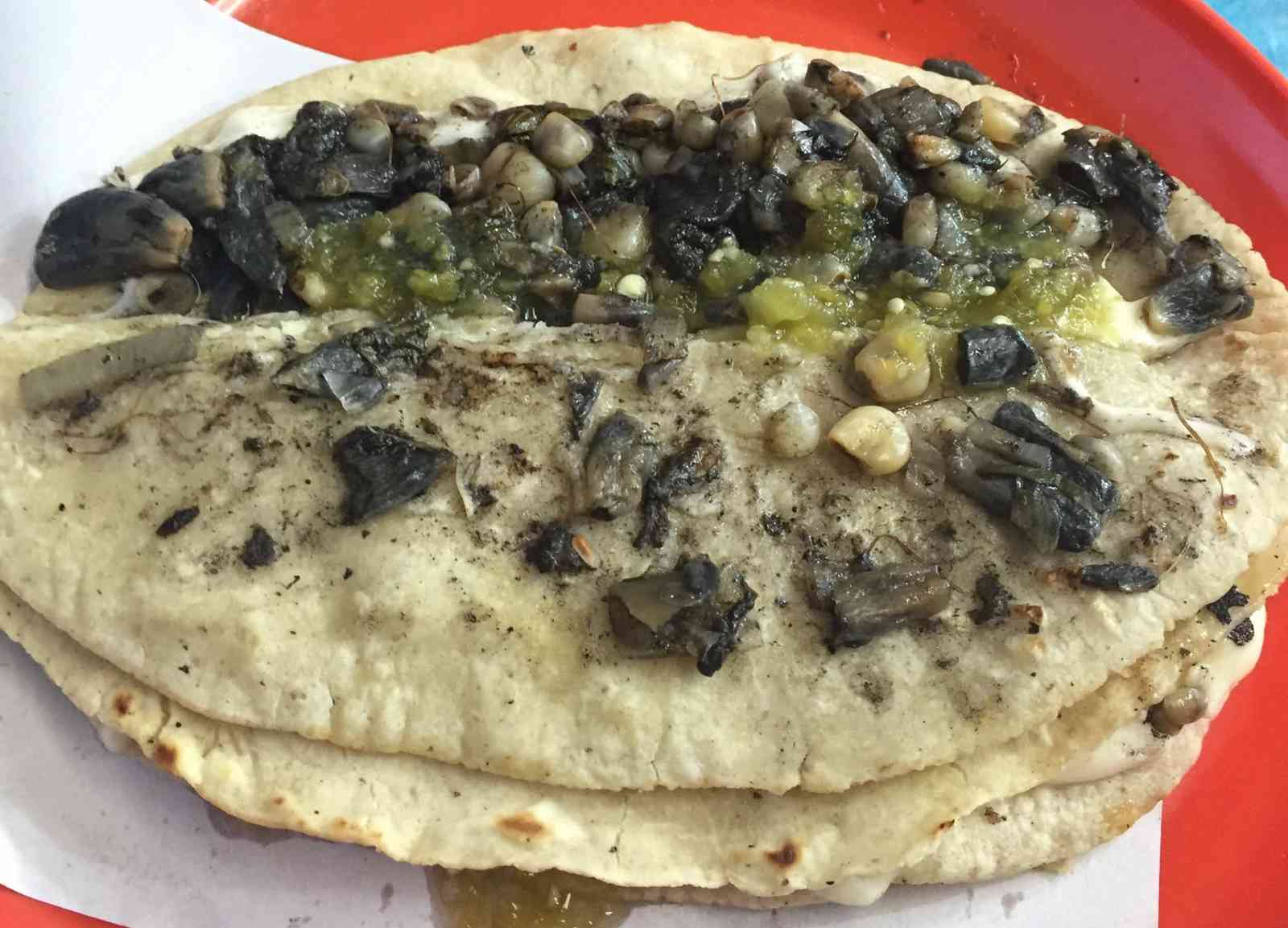 If you don’t usually like corn because of its sweet flavour, you might prefer the woody, earthy, smoky flavour of the corn smut, or huitlacoche, that some people put in their quesadilla in Mexico. The corn gets its unique flavour from the parasite fungus that infests it. It’s harvested when the kernels have swollen into growths that resemble mushrooms.

Even though the fungus is seen as a plant disease in some countries, the infected corn is served as an expensive mushroom in others. It was first introduced by the Aztecs and its nickname 'Mexican Truffle’ indicates its high status in Latin America, where it is a delicacy you’ll find in fancy restaurants, fresh at markets or canned online.

If you're allergic to mango or just fancy a new chutney recipe to go with your Asian food, then chaprah could be something to check out. The Indian tribes in Chhattisgarh use a special ingredient to make their crunchy chutney, namely dried ants and their eggs.

Red ants are a local delicacy in the remote Indian village, where they are eaten live as snack on leaves, dried and sprinkled on food or added in chutney. The wise old men, sirha or shaman, in Chhattisgarh also use the ants for medical purposes. Their bites are said to have antibacterial qualities.

"100 times stronger than blue cheese" is one description of the Icelanders' fermented shark, Hákarl. The poisonous Greenland shark, or sleeper shark, has to be detoxified through a rotting process that takes up to six months to become edible. It is first buried for a few weeks or months, then hung for several months in sheds, before the Icelanders dig in.

About 300,000 people live in Iceland, and not all of them enjoy the traditional dish. The younger generation is pickier than the older, who often enjoy the rotten delight with the local spirit Brennivín, a type of spirit that also goes by the name 'black death'.

It's no wonder that they want a fiery shot to accompany the meat. Even though the reduced amount of urea and trimethylamine oxide makes the shark edible, the smell of ammonia lingers and is even stronger than the taste. 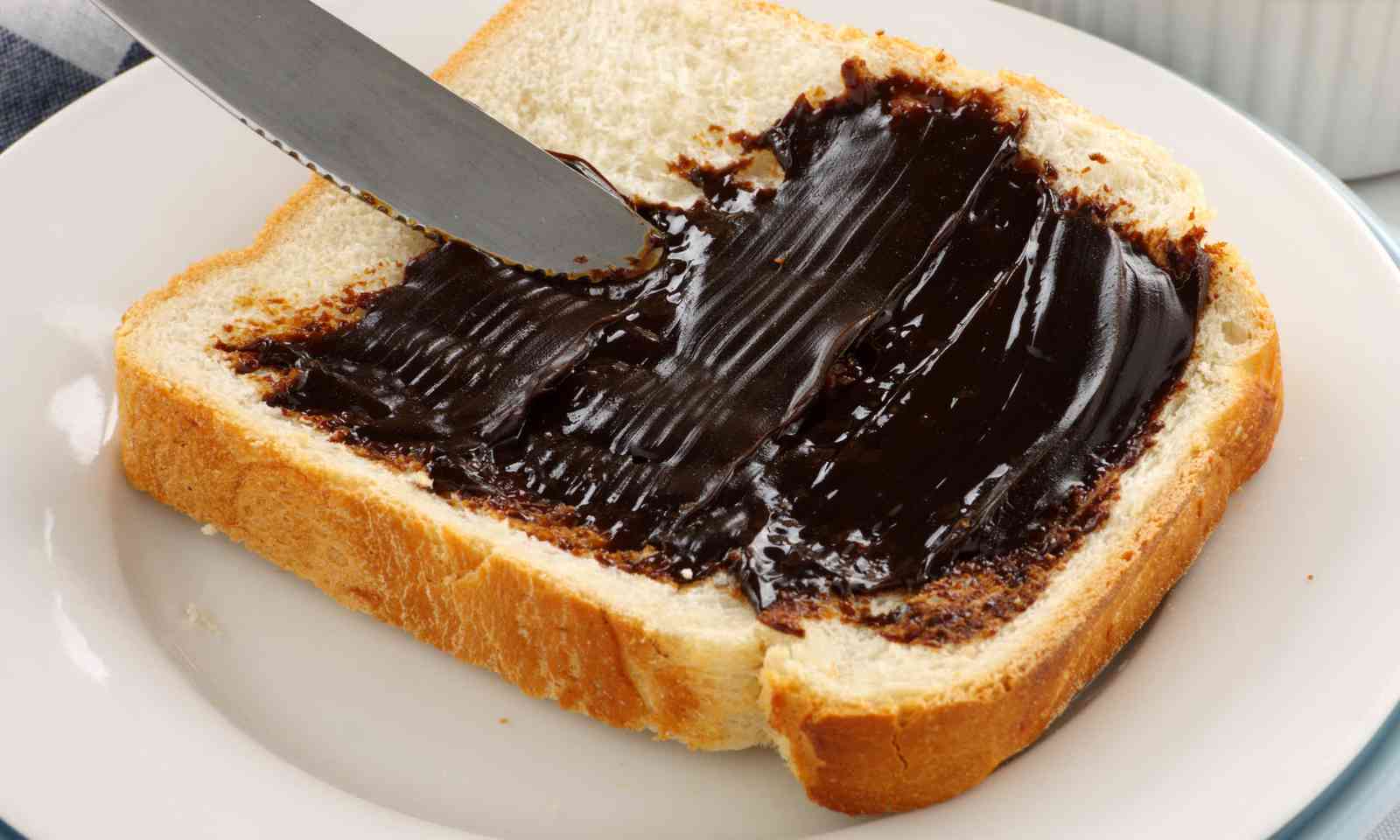 Should the savoury British spread Marmite be allowed on toast? After a three-year ban in Denmark, between 2011-2014, the concentrated brewers’ yeast was finally allowed in the country. The discussion whether it should be put in the mouth or not is still debated though. With the slogan 'Love it or Hate it, the salty and strong taste is not for everyone.

German scientist Justus Liebig discovered that it is possible to eat concentrated brewers' yeast about 100 years ago, and during the Great War, Marmite was included in rations in Great Britain.

Apart from the yeast extract, celery, salt and spices were added to the original recipe that the Marmite Food Company started producing in 1902. Today, 50 million jars of Marmite are produced each year in Burton, England, while in Australia and New Zealand a similar debate rages over the equivalent condiment, Vegemite.  Despite a recent battle with the British supermarket over pricing, Marmite is still goes strong.