10 tasty treats from the Himalaya

Our featured bloggers, Allan and Fanfan, find the meals worth stopping for while trekking the Himalaya

Himalayan food is a diverse and unique cuisine which covers all ends of the Himalayan borders. On our journey we arrive from the Indian side to the idyllic Sikkim region of the Himalayas. While Indian food is prominent here the local Himalayan food presides. The local staple dishes in Sikkim no different than elsewhere in the Himalayas. As expected you will find the favourites of China; chow mein and spring rolls or of India; Curries and Samosas but Himalayan food brings its own unique food culture. A drooling mix of Chinese, Nepalese, Indian and Tibetan food favourites. Himalayan food is easily found at restaurants and fast food of lower Himalayan settlements as well as the tin roofed shacks dotted through the Himalayan ranges. Here are my top 10 Himalayan Food. 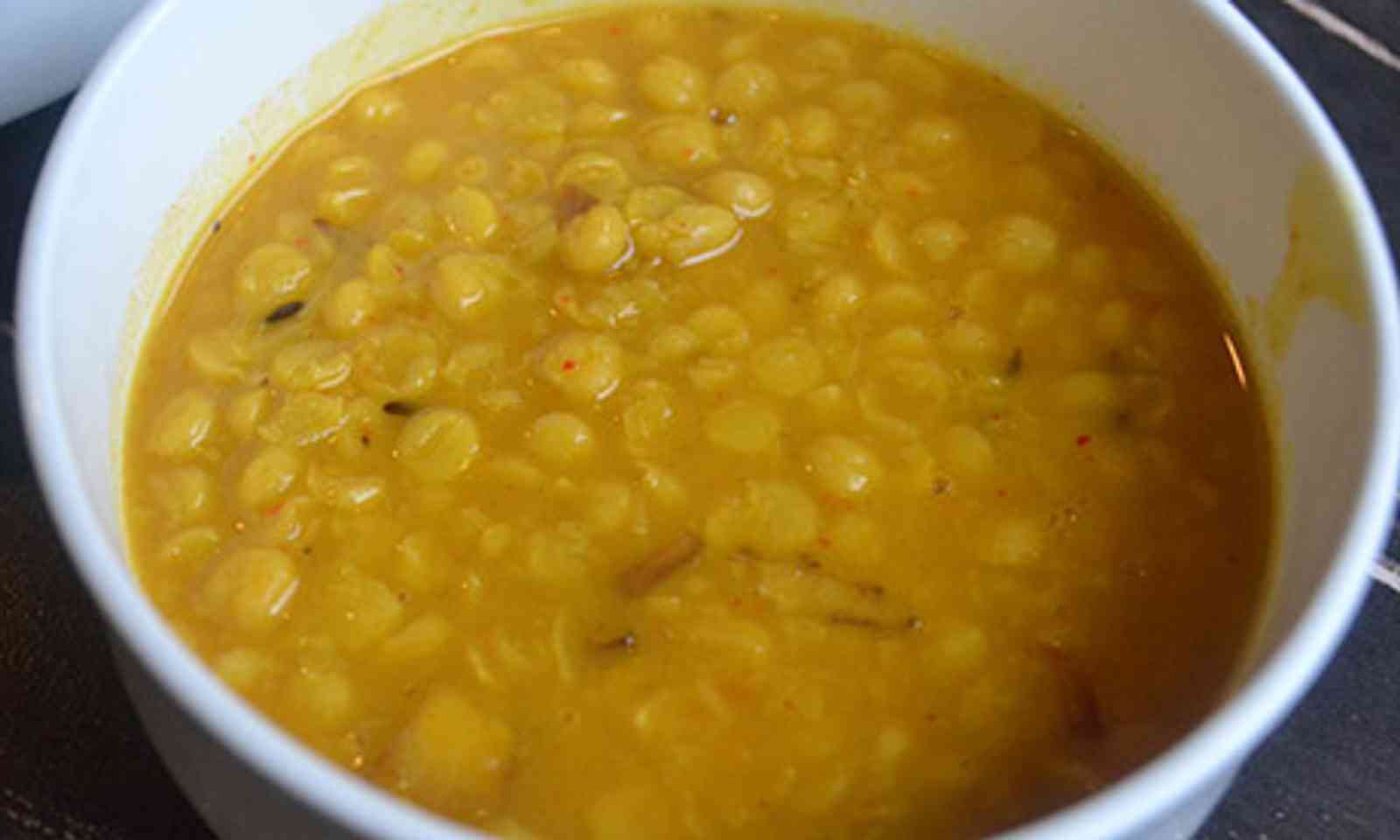 Cooked lentil soup (Dal) served with steamed rice (Bhat). For many Dal is better known as an Indian side dish but in fact it is found at almost every table across South Asia; the Himalayas adopting Dal as their own local food staple. Dal Baht is cheap and simple but in honesty (or at least to me) it is a tad bland and boring. With added spices and dried chilli it does liven up a bit. 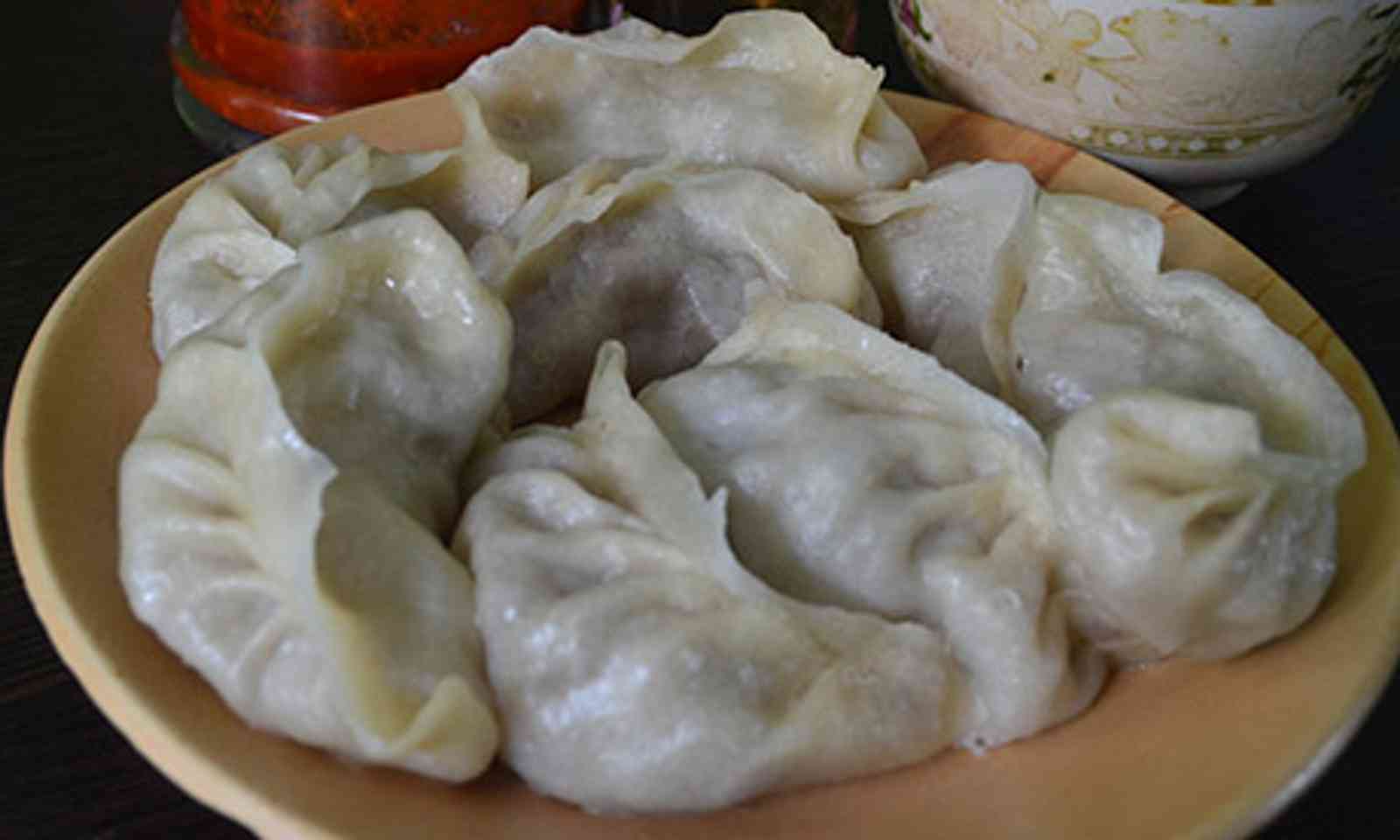 Steamed flour dumplings stuffed with various fillings of veg (vegetarian) or meats (non-vegetarian). In the Himalayas Momos are found everywhere. They are the favoured snack of locals and the perfect fast food to go. Their popularity best shown by not only jumping the Tibet border to India but momos can now be easily found through every city of the subcontinent. With obvious Chinese influences momos are often compared to the popular Baoxi buns of China but to me they better resemble Gyoza dumplings of Japan. More so when stuffed with meat and shallow fried. Momos come served with a rich chilli sauce or dark soy and a side of hot broth. 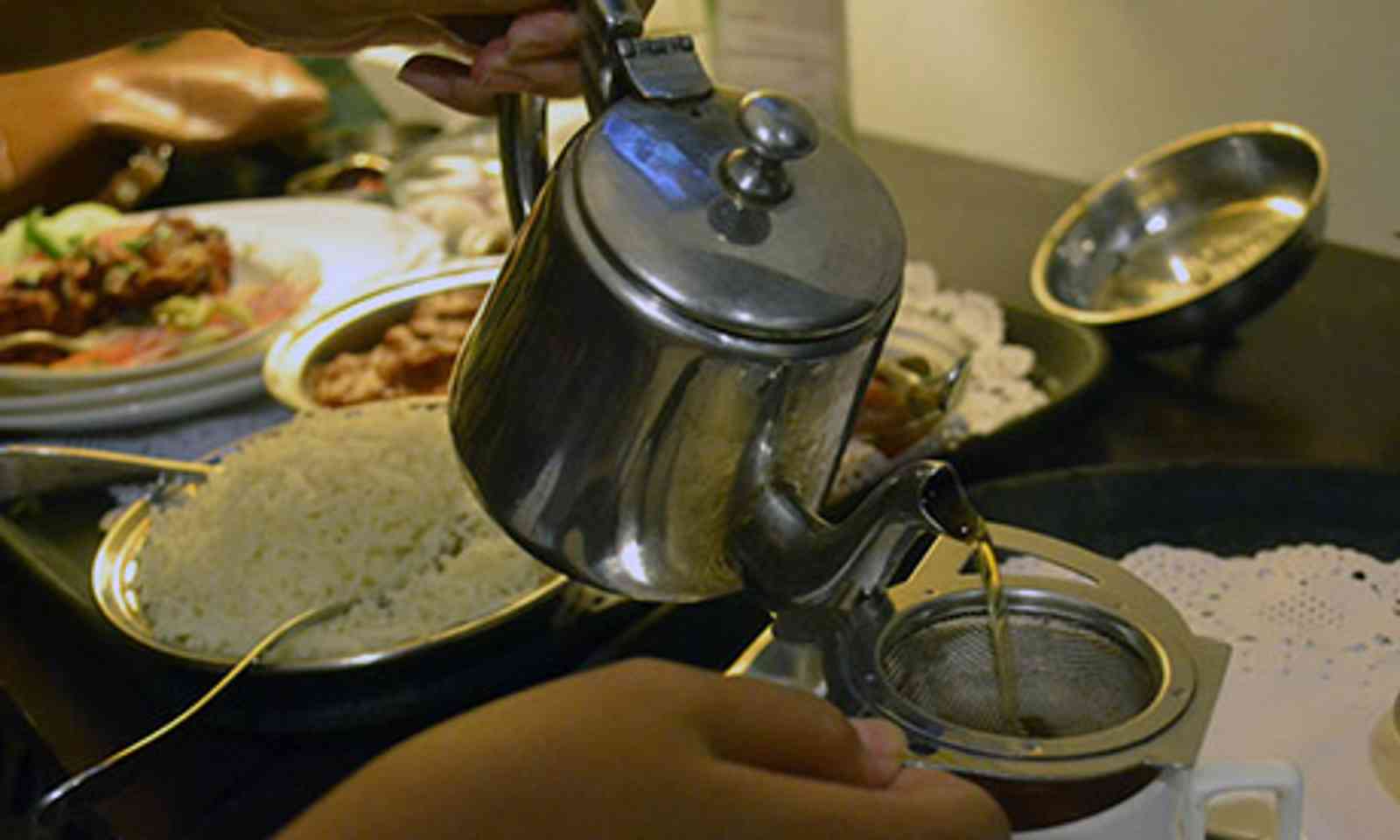 Origins of tea in the Himalayas are often traced back to the 1800’s and the British commercial cultivation. Assam and Darjeeling world renowned for their tasty tea strains. However, rippled tea hills have been found on all sides of Himalayan borders since long before. Locals in the Himalayas sit day long sipping tea to keep warm in the high altitudes. In Nepal they boast their own Nepali Tea and in Tibet the national beverage is tea whisked with yak butter. In Sikkim we spent a night surrounded by the Temi Tea Gardens where local women pluck tea leaves from 7am – 4pm daily. 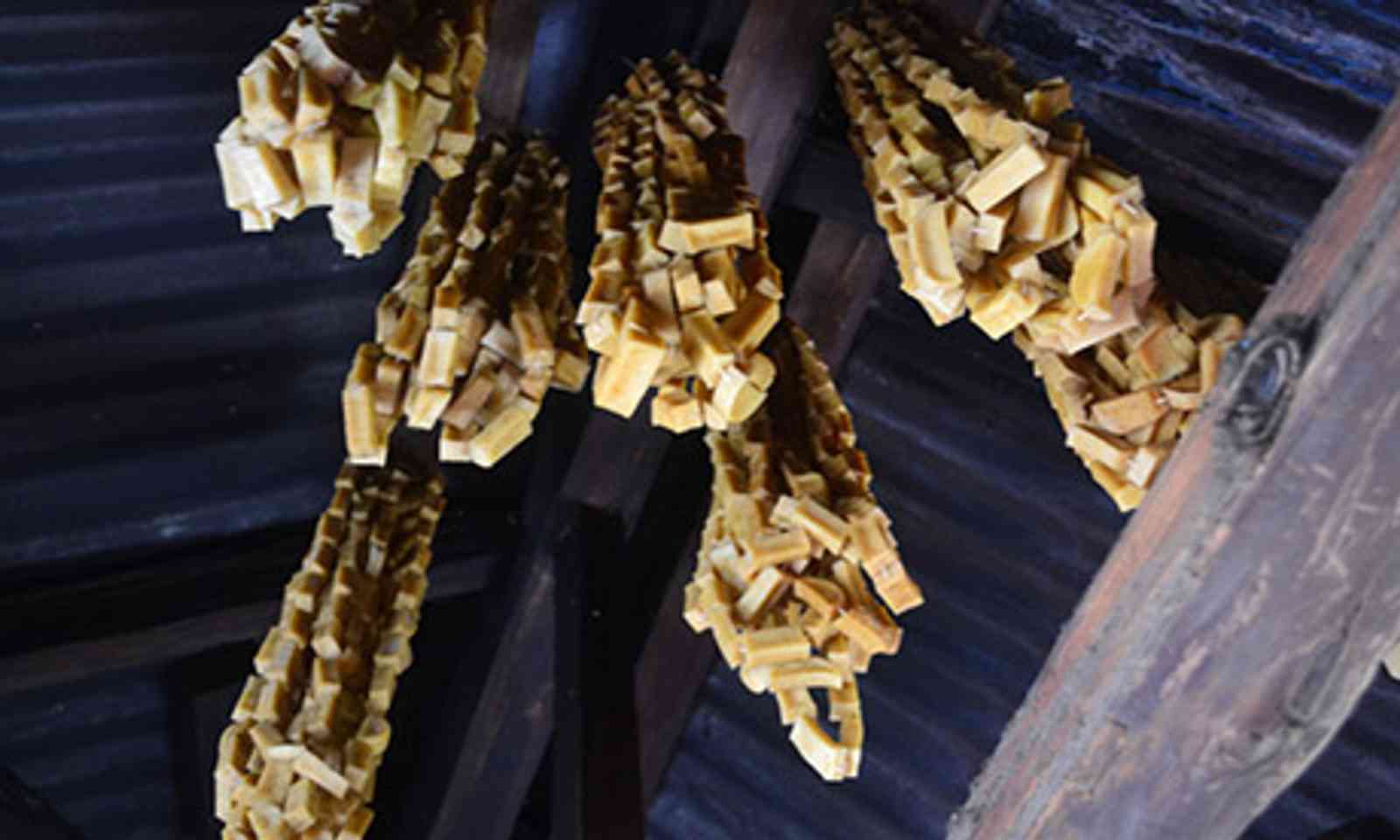 Yaks are synonymous with the Himalayas and at high altitudes, with scarce surroundings, they do come in handy. One of their uses is Hard Dried Yak Cheese known locally as Himalayan Candy. We first came across these rock solid sweets as they hang from roof rafters in a roadside shack. The whey squeezed from the Yak milk before being strung and left to dry and harden. Don’t try to break them with your teeth; your teeth will likely break. Put them in your mouth and suck… for hours. Not overly appealing but interesting. A favourite with Himalayan nomads. For those new to Yaks; below is Fanfan riding one. 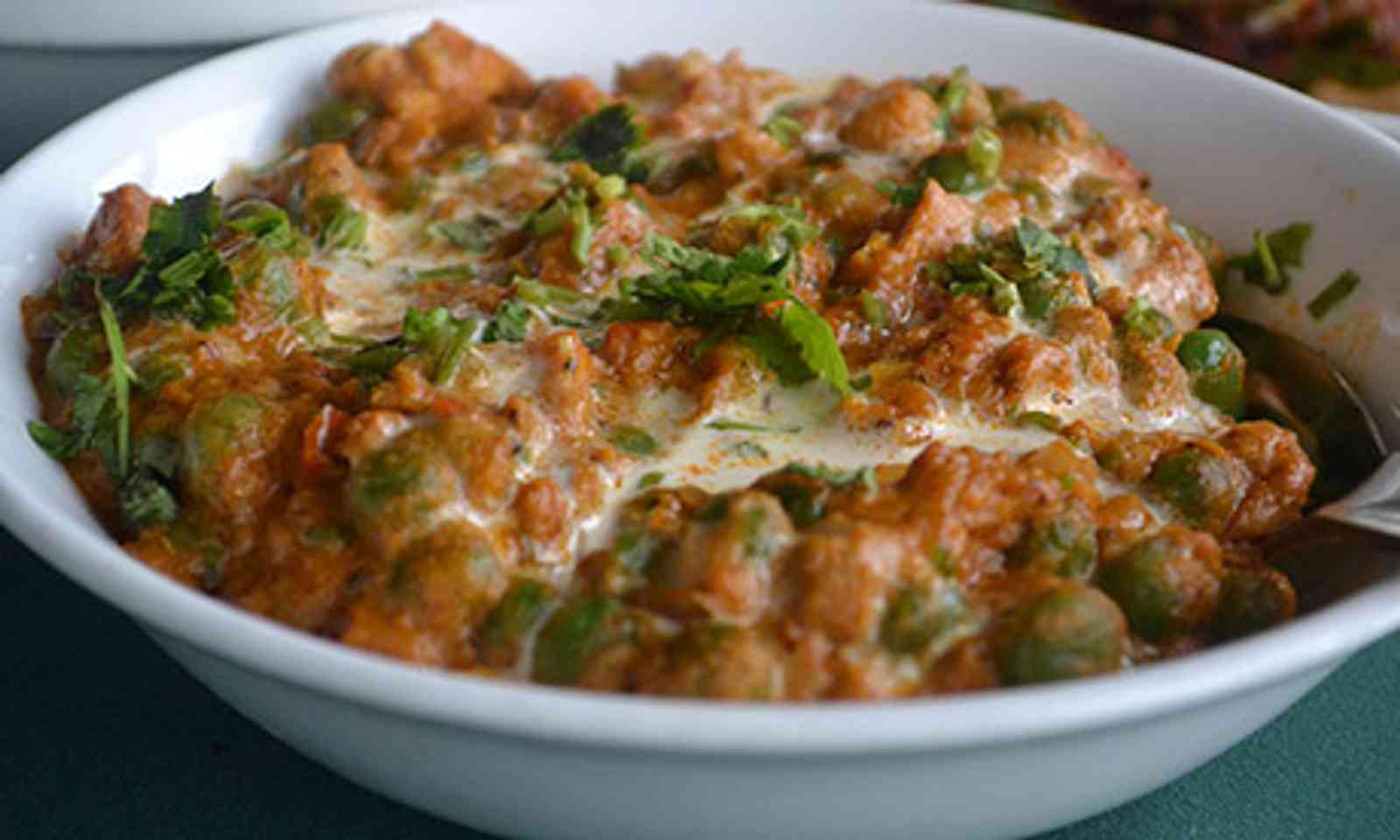 Satisfying, filling and delicious. For me Paneer is the perfect meat substitute. With added curry and spices it is the one reason why vegetarianism is possible (but very unlikely). It is also a very simple cheese to make. Start with full fat cow milk, separate the curd from whey, wrap the curd in cloth and squeeze remaining moisture under heavy weight. We have paneer. Chop the block to bits and mix with curries and other tasty dishes. Paneer Momos?  A personal favourite is Mattar Paneer cooked with green peas and a top notch curry sauce. 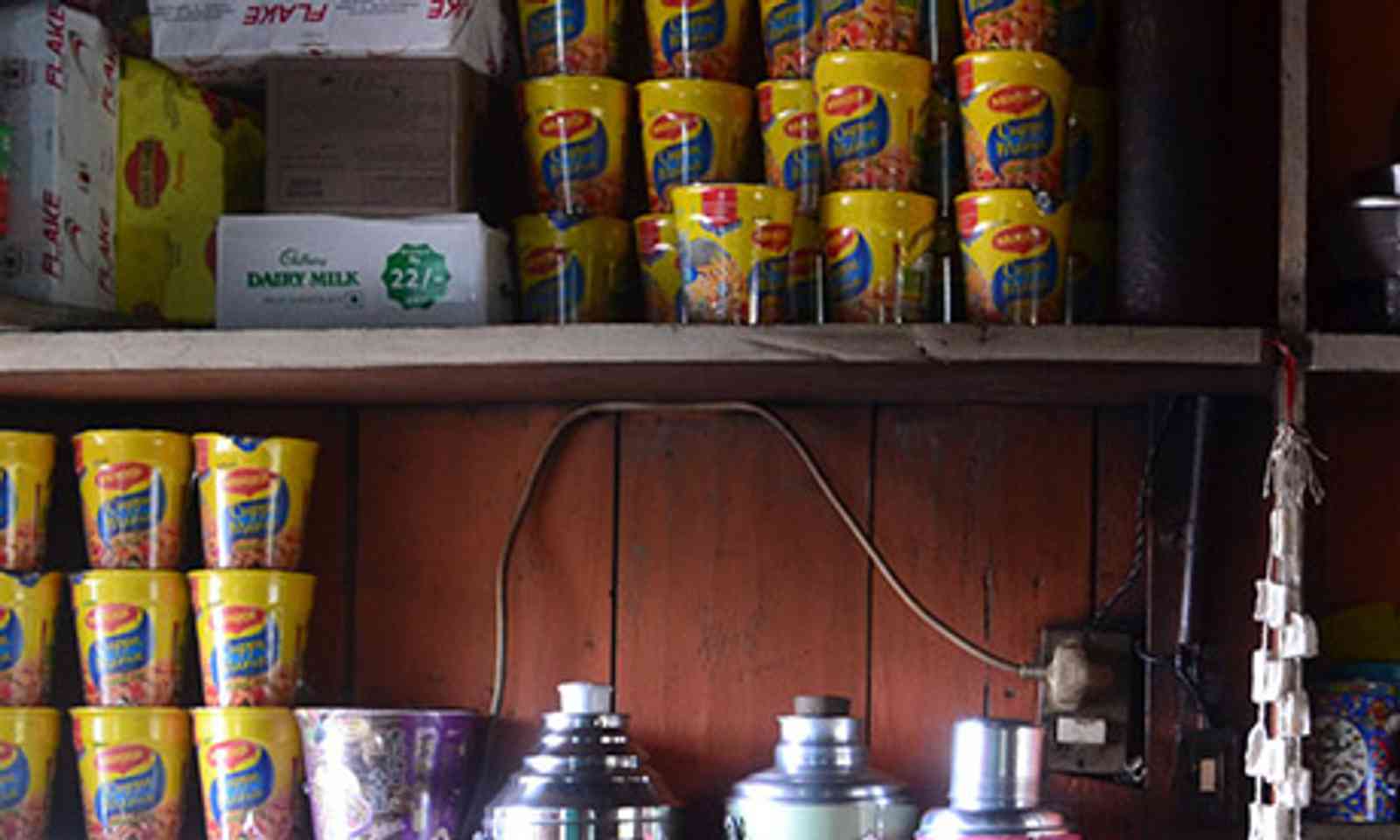 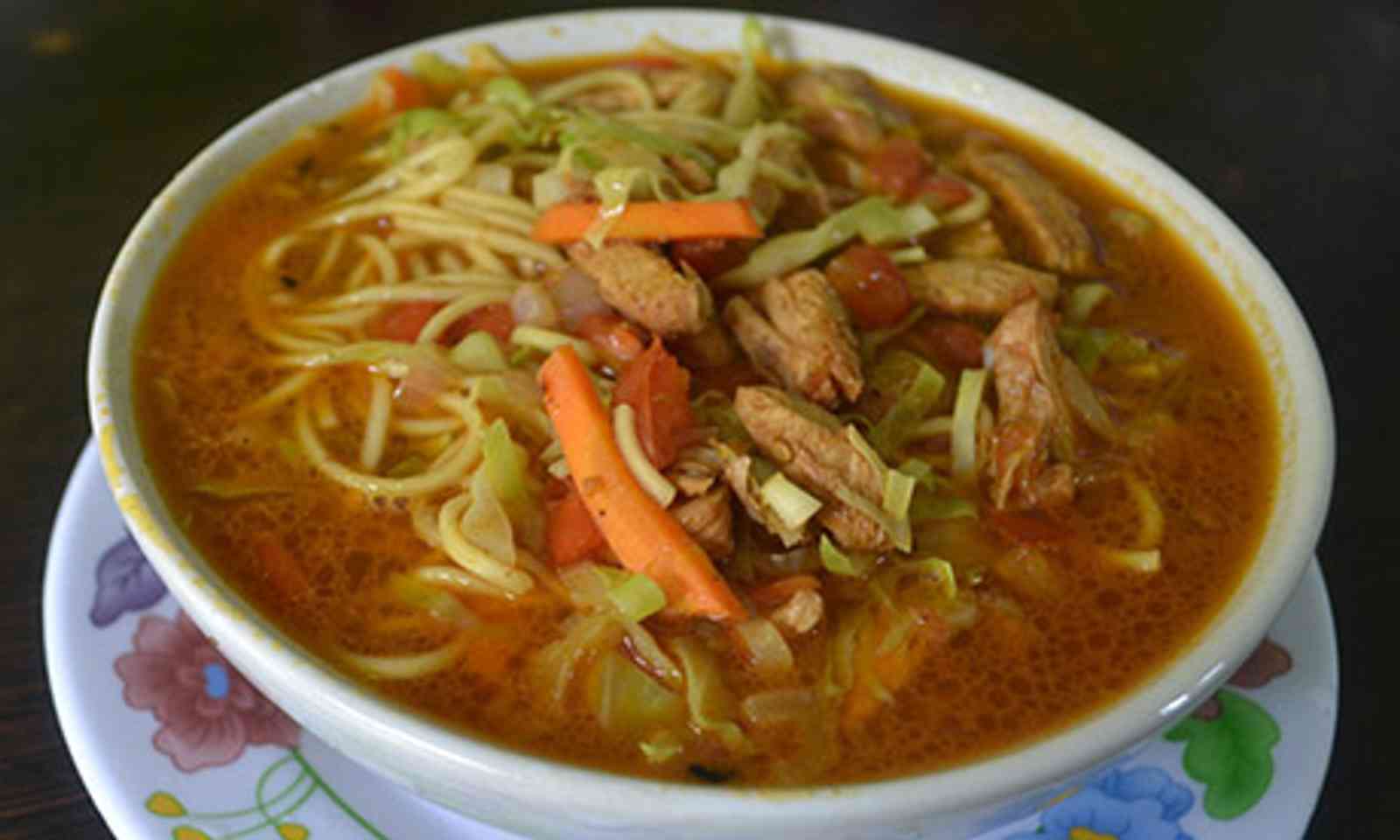 Thukpa I like to think of as the posh version of instant noodles. A similar bowl only Thukpa brings fresh ingredients and happy additions of local meats. The noodles in Thukpa are generally egg noodles and they come served in a hot, spicy and tomatoey soup. Topped with meat of choice. Local variations of Thukpa are found throughout the Himalayas; for me the spicier the better. Thukpa originates from Tibet where the name translates from Tibetan as ‘noodles’. 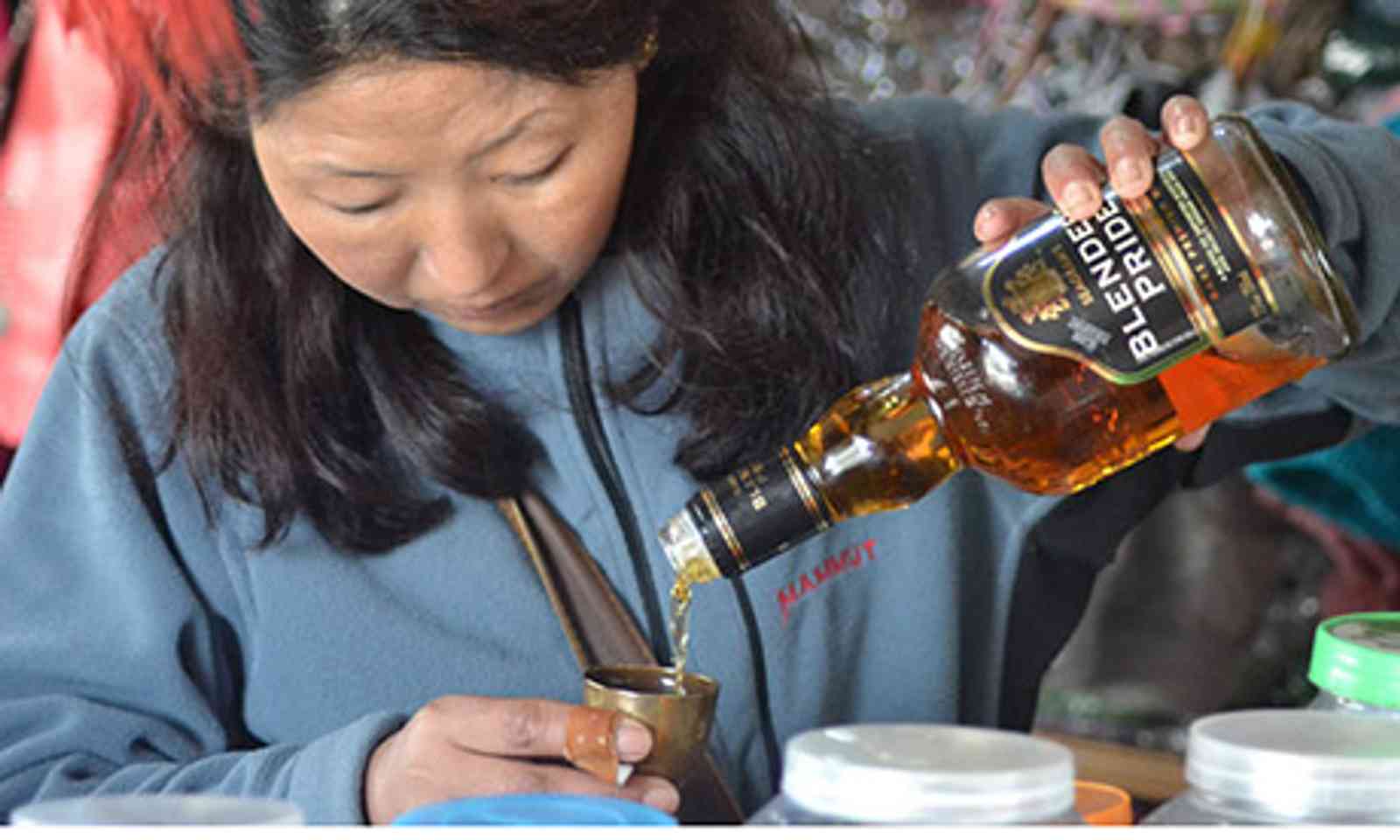 As always local liquors are my favourite part of research. With cheap, tax-free booze in Sikkim the opportunities are even more exciting. I start with the local Sikkim liquors which unfortunately were a little disappointing. Sikkim whiskys all with a repetitive and unappealing nose, palate and finish. Indian whiskys on the other hand were impressive. The two local favourites are ‘Signature’ and ‘Blenders Pride’ both rich malty and good for the long run. Another surprise favourite was the Honey Bee Premium Brandy from India. Top notch. Local liquors will likely change over borders. 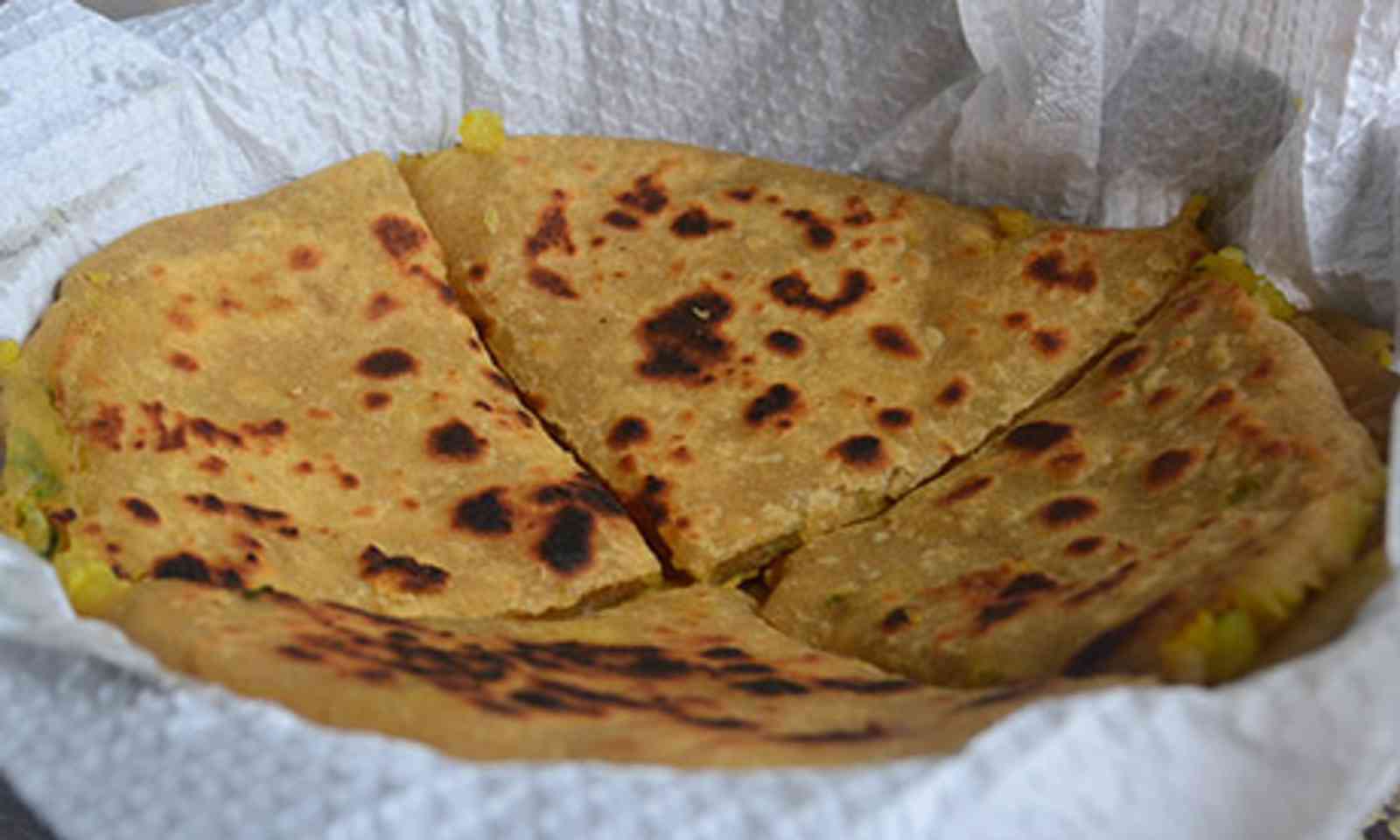 In the Himalayas you are more likely to find flat breads on the menu than rice dishes. Paratha being the local favourite. Paratha literally means ‘layers of cooked dough’ and this is exactly what it is. A tasty pan fried flat bread made from layers of unleavened wheat dough. While delicious on their own Paratha do come better stuffed; often with a layer of spiced potato in the centre (Aloo Paratha). While popular daylong they are most common found at breakfast served alongside condiments of curry or curd. Locals also known to dip them in tea (I didn’t try). 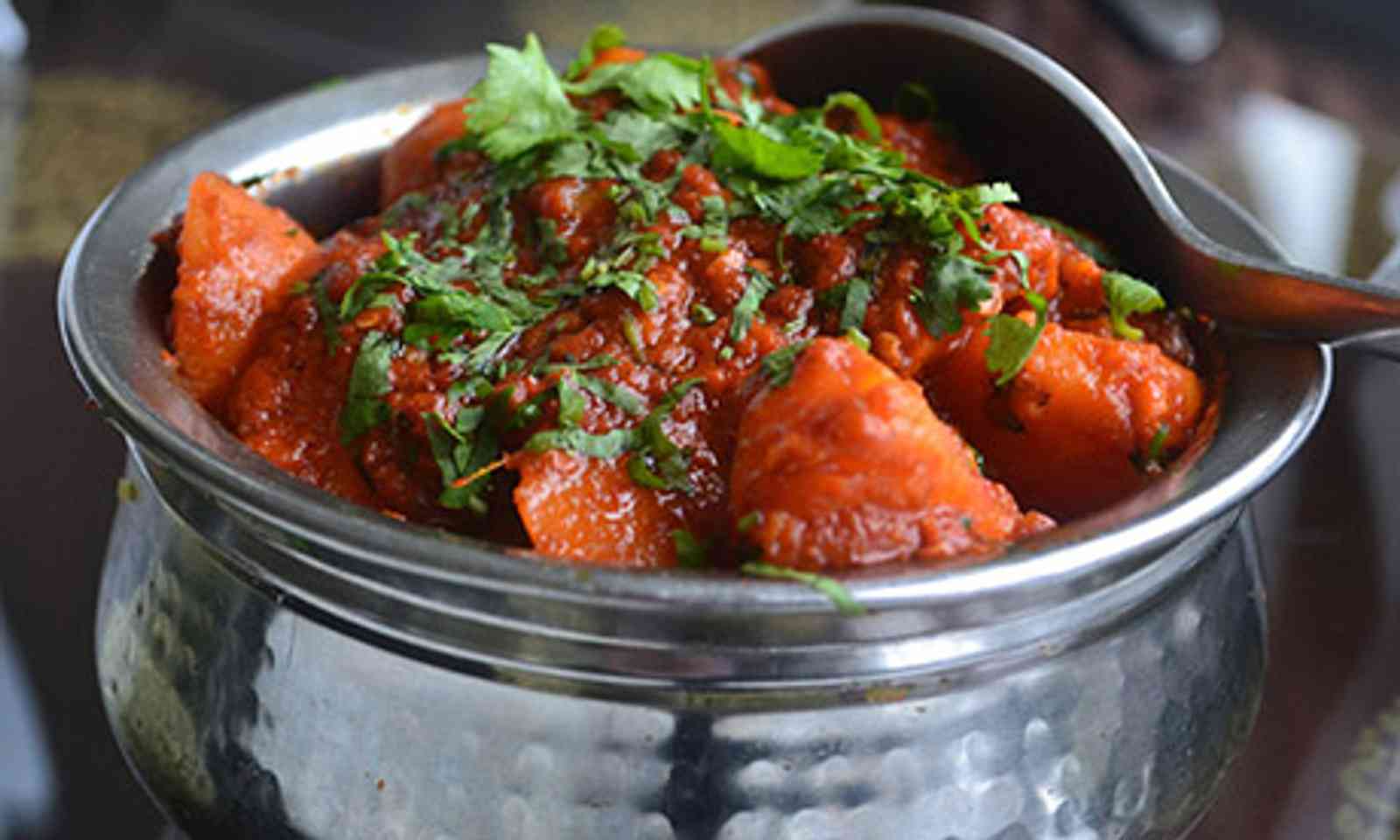 Dum Aloo is one of the must have Himalayan foods. A dish perfect for the curry fiends. Originating in Himalayan Kashmir Dum Aloo has spread across the mountains to find every restaurant menu in the region (not so much the tin roofed shacks). It is honestly one of the best foods I’ve come across. Fried golden brown potatoes, sautéed onions, cooked in a spice infused tomato gravy.  It is the one reason why veganism seems possible (but very unlikely). If Dum Aloo is not on the menu an alternative Curry Aloo or Aloo Bhaji are next best.

Allan and Fanfan are living the dream life in Bangkok. "A bucket list is meaningless unless tasks are extra special," says Allan. "Life ambitions and life changing experiences, not bungee jumps or swimming with dolphins. This blog charts our Less Ordinary Bucket List."