As the longer days tussle with winter's chill, snowdrops spring from frozen ground across the UK. Here are 9 of the best places to enjoy them

The delicate nodding heads of Galanthus nivalis carpeting the late-winter landscape inspired William Wordsworth to write To a Snowdrop in 1819, and more than 200 years later, the ‘chaste snowdrop, venturous harbinger of spring’ still delights walkers during the UK's most bitterly cold time of year.

While they aren’t native – they were most likely introduced to the UK in the 16th century – snowdrops have set the landscape aglow for so long that we’ve come to recognise them as a symbol of winter’s end. From the end of January through to early March they’re widespread in the wild, and can be seen bobbing on road verges, clumped around the banks of streams or bathing in the dappled light of the woods.

Snowdrops are at their most spectacular when they occur en masse in valleys, or when carpeting woodland floors. Here are 9 places across the UK to admire them in all their glory. 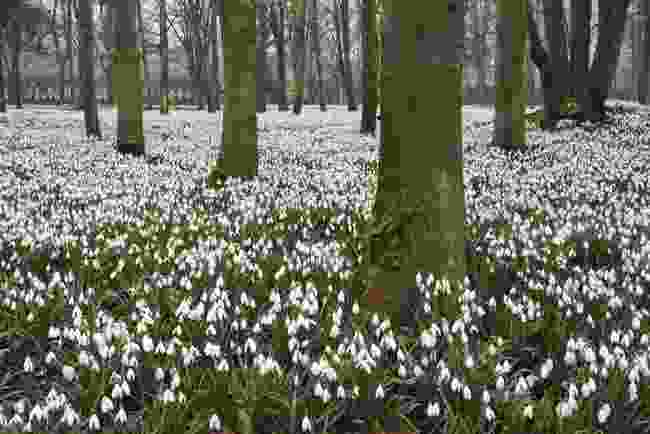 A seven-acre beech wood at the Welford Park estate in Berkshire is draped in white during late winter and early spring. Famously the filming location of the Great British Bake Off, the centuries-old property opens just once a year for the snowdrop season.

Visitors are invited to admire the honey-scented snowdrop displays along woodland paths beside the River Lambourn, with the opportunity to tour the house as well – at one point the hunting lodge of King Henry VIII. Historically the site of a Norman monastery, it's thought the snowdrops were planted by the monks of Abingdon for decorative use, and for their symbolic meaning and medicinal properties, as they were believed to cure headaches. 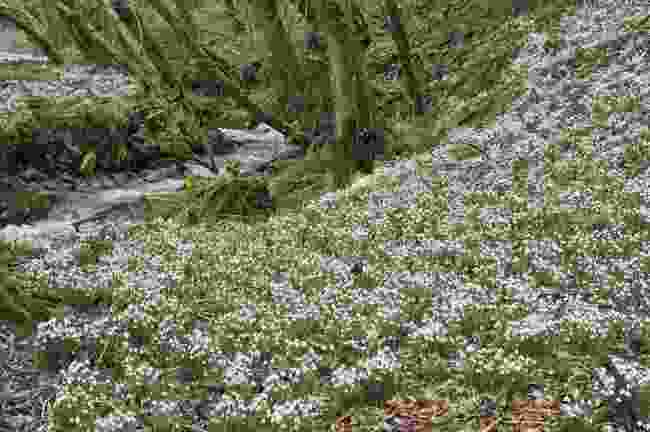 Five hundred acres of woodland and verdant dells surrounding the River Avill provide a natural home for thousands of snowdrops. The enchanting Snowdrop Valley in Exmoor is located on a privately-owned estate, which opens once a year in late winter to allow visitors to walk short and long circuits. 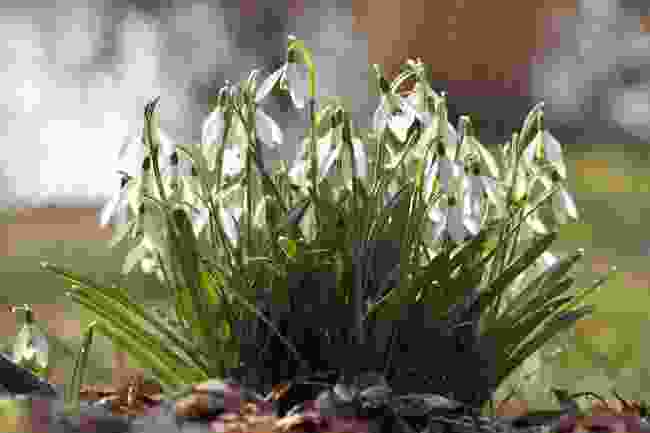 A close up of snowdrops (Pixabay)

The otherworldly grounds of Bodnant Gardens in North Wales host a blizzard of snowdrops in February, which get more profuse with every season thanks to visitors and volunteers who, each year, help the team at Bodnant inch their way toward achieving a 100,000-snowdrop walk looping 1.5 miles around the garden. 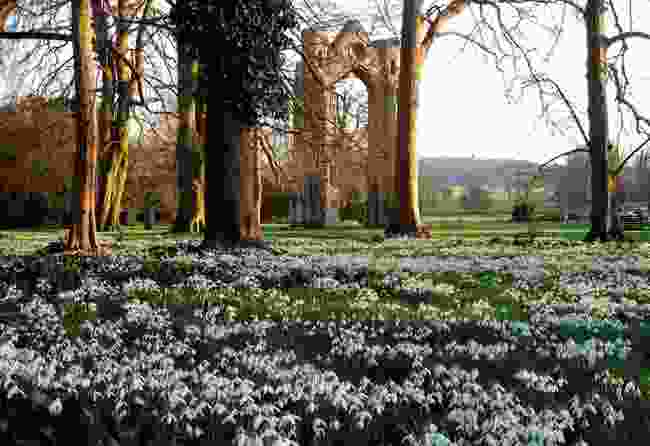 For an evocative winter walk head to Walsingham Abbey in Norfolk, where snowdrops cast a new light upon the crumbling stone of the old abbey, a 13th century ruined monastery. Eighteen acres of woodland and green fields surround the ruin, the River Stiffkey gently burbling nearby. 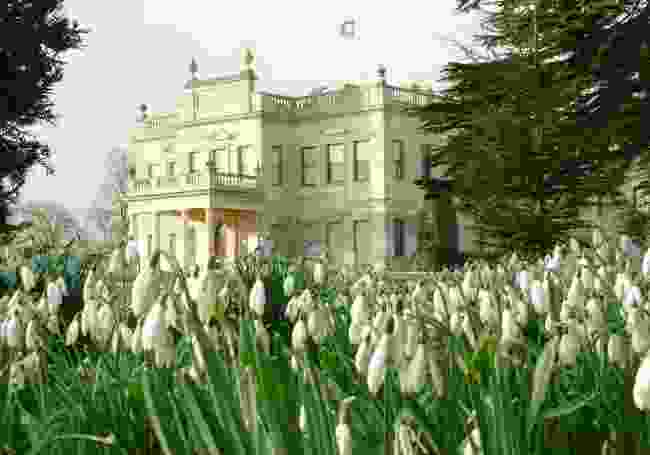 Half a million snowdrops put on a glittering show across the wildflower lawns and woodland clearings at Brodsworth Hall in South Yorkshire. A further quarter of a million winter aconites bloom there too, along with other winter and early spring delights. Since undergoing a large-scale, back-breaking restoration by English Heritage in the 1990s, the Victorian-built property and Italianate gardens are a must-see too while you're there. The incredibly popular snowdrop walk at Rode Hall in Cheshire saunters through the estate’s beautiful Old Wood, home to drifts of white snowdrops of over 70 varieties. Originally planted in 1833, the naturalised display has been tirelessly tended to by many generations of the Wilbraham family. 2018 was the 200th anniversary of the death of the celebrated landscape artist Humphry Repton, whose work at Rode Hall looks its best during late winter. 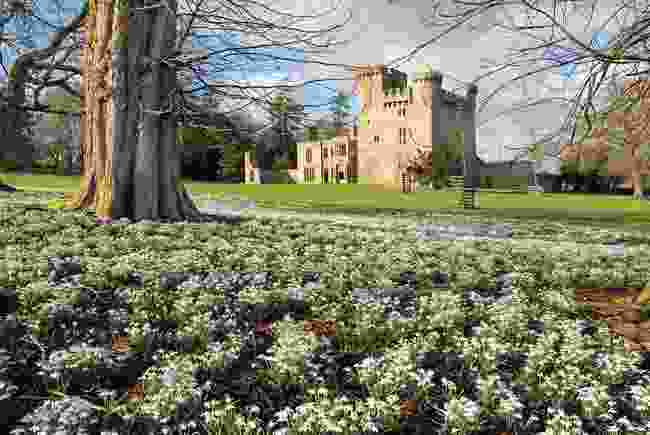 The snowdrops at Belsay Hall are steeped in family tradition. In the 18th century, Lady Anne Middleton took it upon herself to plant a clump of these dainty white flowers, and each successive Lady of the house since has continued to grow the collection. Thousands now carpet the grounds. Seventy acres of woodland welcome masses of snowdrops each winter from the estate’s stream all the way to the sandy beach and sea. Take in the crisp coastal air on this refreshing winter walk celebrating the diversity of snowdrops; Lady Erskine and her eight children care for some 350 varieties of galanthus on their estate. The family are so fond of their collection, they now run a specialist snowdrop nursery, as well as a snowdrop-themed café onsite. 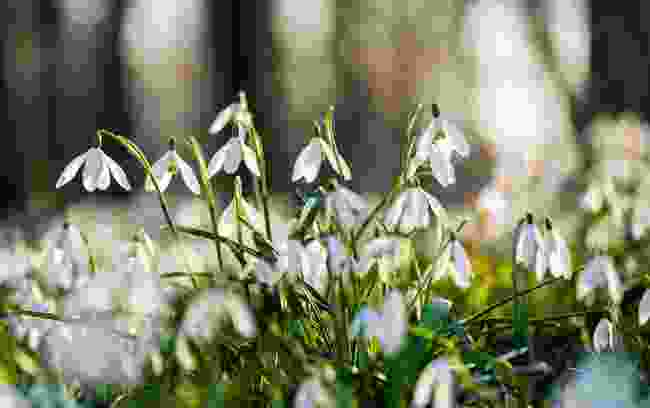 A close up of snowdrops (Dreamstime)

The grounds of County Armagh’s handsome riverside estate The Argory are blanketed with snowdrops each winter. An invigorating two-mile circular walk passes the estate’s oak plantation, meadow and famous Lime Walk, with the River Blackwater trickling alongside.

The botanical name Galanthus nivalis is derived from Greek word ‘gala’ for milk, and ‘anthos’ for flower, followed by the Latin word ‘nivalis’, for snow. In the Middle Ages, they were known as Candlemas bells, on account of their blooming time in February.