WIN! A 14-night road trip for two in Colorado

There aren’t many places in the world that you can see sand dunes stretching to the base of snow-capped mountains, but Colorado is a state full of natural surprises. Now you can explore its rich, wild landscape with Trailfinders, the travel experts. And best of all, they are offering you the chance to experience it yourself by winning a 14-night road trip for two across the state. Here’s what to expect… The journey starts in Denver, a town framed against a wild mountain backdrop and the foothills of the Rockies. Known to many as the ‘Mile High City’ for its high elevation, one of the best views can be found at Sloan’s Lake Park, a serene escape flanked by peaks on one side and the glistening high rises of Downtown towering on the other. All the while, locals come to jog, cycle and paddle in peace. There’s more to Denver than just dramatic scenery, though. The city has built itself a hip reputation in recent years, and an excellent craft cocktail and brewing scene has taken shape. Downtown’s bars and music venues are a fine place to test it out and round off a visit. From the city, drive west into a rocky high desert landscape of burnt ochre, to Alamosa, the San Juan Mountains and Durango. Each has its own legends and stories, but it’s also a chance to explore a pair of Colorado’s grandest sights. Head to Mesa Verde National Park to admire 13th-century cliff dwellings, then drive further north to explore the gravity-defying monoliths of Colorado National Monument along the Rim Rock Drive. The former was once home to the Ancestral Puebloans, a people whose disappearance 100 years after they first carved these houses is still a mystery. Next, head north to where the cool air of Rocky Mountain National Park provides relief from the hot desert. Here you can cruise one of the highest passes in the US on the scenic Trail Ridge Road, which only opens in summer. The views over the snowy peaks are sublime. 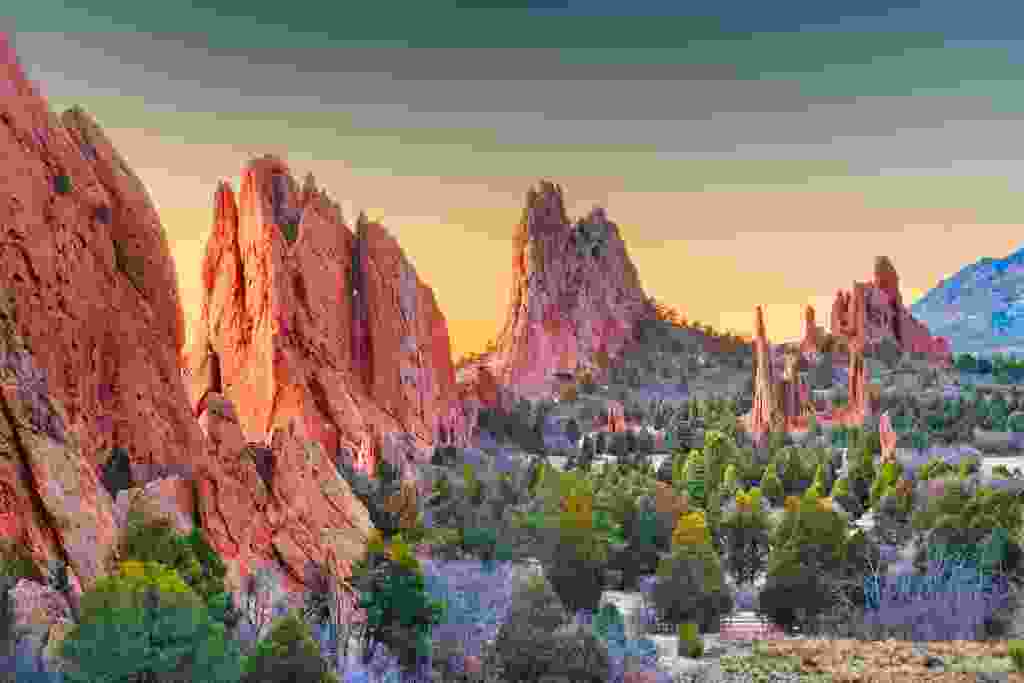 End your time in Colorado by soaking up the nature at Colorado Springs. Garden of the Gods Park is a perfect place to start, with towering red rock formations set against the backdrop of the Pikes Peak mountain. At Cave of the Winds Mountain Park, meanwhile, you can experience three different cave tours plus an outdoor park with zip lines and a via ferrata. And then there is Seven Falls, which drops from a height of 55 metres, carving a jagged path through the rocks – the perfect finale.

Colorado Tourism, Trailfinders and United Airlines are offering one lucky winner a 14-night road trip for two across Colorado, including return flights, car hire and 14 nights of hotel stays . For your chance to win, please answer the following question: